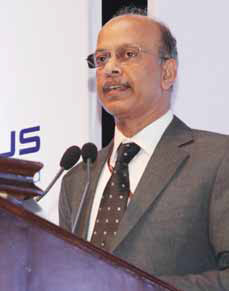 The power sector is in a phase of transition and changing dynamics, with the energy mix diversifying, the future of coal-based power uncertain, and the financial position of discoms becoming increasingly unsustainable. At this juncture, making changes in the regulatory and policy framework could facilitate sector transition and bring in higher efficiencies. At EnRich 2019, KPMG in India’s annual energy conclave, P.K. Pujari, chairperson, Central Electricity Regulatory Commission (CERC), spoke at length on key issues in the power sector, the state of the distribution segment and the changing regulatory landscape. Power Line presents excerpts from his address…

The power sector is under tremendous stress, mainly because of the various disruptions that are coming in. The way we do business in the sector is changing at a fast pace. The governance of the power sector is totally different from other energy sectors such as coal and petroleum. The source from where the money comes in the sector (that is, discoms) is within the domain of the state government. So, unlike the petroleum and coal sectors, where the central government is the dominant policymaker, in the power sector, the policies and programmes have to be coordinated between the central and the state governments.

In 2014-15, we did talk about renewables coming into the energy mix, but we probably did not anticipate its full impact. Now the amount of renewables that have been integrated into the system in the past three to four years has changed the entire dynamics of how the power sector operates. Recently, in two states, 90 per cent of the renewable energy plants were operating while all the thermal stations were backed down. This (backing down of thermal) has operational as well as cost impacts, which we need to address because this is likely to happen more often in the future.

If we look at all the discoms, it is not that each company is doing badly. Some of the state-owned companies are doing fairly well – they may not be making money but they are efficient and are not making losses. As many as 15 discoms have been doing fairly well for 10-15 years. So, it is not the nature of ownership that creates the problem, it is the overall governance in a particular part of the state that makes the difference. Even if discoms are state government-controlled entities, they can perform well, provided they improve their efficiencies. So a black-and-white statement cannot be made, saying that privatisation is good or government ownership is bad.

In the past, we have tried to bring in some element of efficiency in distribution, but it has not worked because of political and other reasons. Now when disruption is taking place in the sector, we have an opportunity to change the way we do business.

Investments in greenfield power projects are less likely to take place, in the near future at least, and only public sector entities like NTPC can make investments. Large-scale renewables are already coming in and there is a significant quantum of generation capacity that does not have PPAs. Also, many generation plants are completing their life; they are almost 20-25 years of age and will retire in the next five to six years. So, in the coming years, new investment is not expected in the coal-based power segment; renewables will continue to grow and a large number of thermal power plants will retire. These changes provide us opportunities to restructure the way business is done in the power sector.

The whole problem arises because traditionally, we have had long-term PPAs. This might have been the right decision 20 years back to bring in investments and certainty for investors. But today, discoms are not in a position to enter into 25-year PPAs. We have to consider medium-term and short-term PPAs as well as spot market purchases. Today, discoms have about 90 per cent long-term PPAs, 2-3 per cent medium-term PPAs and 6-7 per cent short-term PPAs, but this will change drastically in the future. The ratio of long-term PPAs in the total power mix of discoms is expected to come down to 60 per cent and then we can have tremendous flexibility in the energy market as discoms will have better resource adequacy. Only 50-60 per cent of their resources will be locked into long-term PPAs; the rest will all be either in medium-term contracts or be transacted in the energy market.

Regarding carriage and content separation, there are several federal issues to pass the Electricity Amendment Act, 2018. Tremendous political push is required to get the act passed in both houses of Parliament. So carriage and content separation is a good option, provided we manage to get the act amended, and privatisation of discoms is debatable, but personally I feel franchising is a slightly better option.

Business in the power sector is done in a peculiar way. On one side, you pay in advance (gencos pay coal companies upfront, coal companies pay railway companies upfront) and on the other side, discoms pay for power on a credit basis and when the money does not come in 60 days, the stress cycle begins. So if we make a large part of energy available on a payment basis, we can bring in financial discipline.

We have tried to effect a financial turnaround of discoms in the past, as a result of which the average loan interest rates reduced from 12 per cent to 8 per cent and the benefits were passed down to the discoms in the hope that this would provide a window for them to restructure and improve their operational efficiency. But that did not happen because of governance issues. If there is willingness, nothing is impossible.

Evolution of the regulatory landscape

We also need to change the way the regulators have functioned so far. We frame regulations in anticipation of changes in the sector, and that is one part of it. Unlike other regulators, the power sector regulator is a quasi-judicial body that has the power of adjudication. The way the adjudication has happened in the regulatory framework in the past needs to be changed because we are now looking at adjudicating not purely from a law viewpoint (that is, as a judiciary or court function) but also on the basis of economic regulations/commercial implications. This is because if one goes strictly by law, one comes to a particular conclusion and if one looks at the economic issues and as a sector regulator, one reaches a different conclusion.

This really decides what is going to happen in the future. So the functioning of the regulator will become more important, especially when the sector is under stress or when the sector becomes more dynamic. The regulator has to prepare itself for the things that are going to come and put in place regulations that facilitate the transition.

Power is essential for economic growth and everybody recognises that. But the issues are so complex that unless there is a coordinated approach to sort them out, things are not going to work. There is a need to work in a coordinated manner both at the interministerial level and the state level.

Overall, the recent changes and new dynamics are affecting the sector. We need to assess the policy and regulatory framework in this context – whether we are responding to these changes in a proper way and whether we are putting in structures that can facilitate sector transition so that the disruption is minimised.