The power sector is in the midst of a demand slowdown that is threatening all stakeholders.

Electricity demand reduced by 4.3 per cent in November 2019 from a year ago, representing a fourth straight month of decline. Earlier, in October 2019, power demand fell by 13 per cent over the previous year, the steepest monthly decline in more than 12 years.

The year-to-date numbers reflect the sluggishness in demand as well. In the first eight months of fiscal 2020, the all-India electricity demand growth slowed down to just 1.2 per cent from 6.4 per cent in the corresponding period of the previous year. Mirroring a similar trend, power generation in the first eight months of fiscal 2020 saw a mere 1 per cent growth compared to 5 per cent in fiscal 2019.

The fall in demand has been sudden, though not unexpected given the slowdown in economic activity. The country’s economic growth slowed down to 4.5 per cent in the July-September quarter of fiscal 2020, the weakest since 2013, as consumer demand and private investment dipped. In November, Moody’s Investors Service stated, “For the past 10 years, the ratio of power demand growth to real GDP has been around 0.8. This implies that the sharp decline in power demand is symptomatic of a slowing economy.”

Experts believe that the demand slowdown is deeper than the data shows. A sustained slowdown in economic activity will affect purchases by industrial and commercial consumers, which consume about 40 per cent of the electricity produced and hence also impact the health of discoms, which are already dealing with cumulative book losses of nearly Rs 280 billion (as of fiscal 2019). This, in turn, would curtail their power purchases from gencos. Further, it could worsen the stress in the renewable energy sector given that utilities would be unwilling to sign new PPAs even though renewables provide the cheapest power. 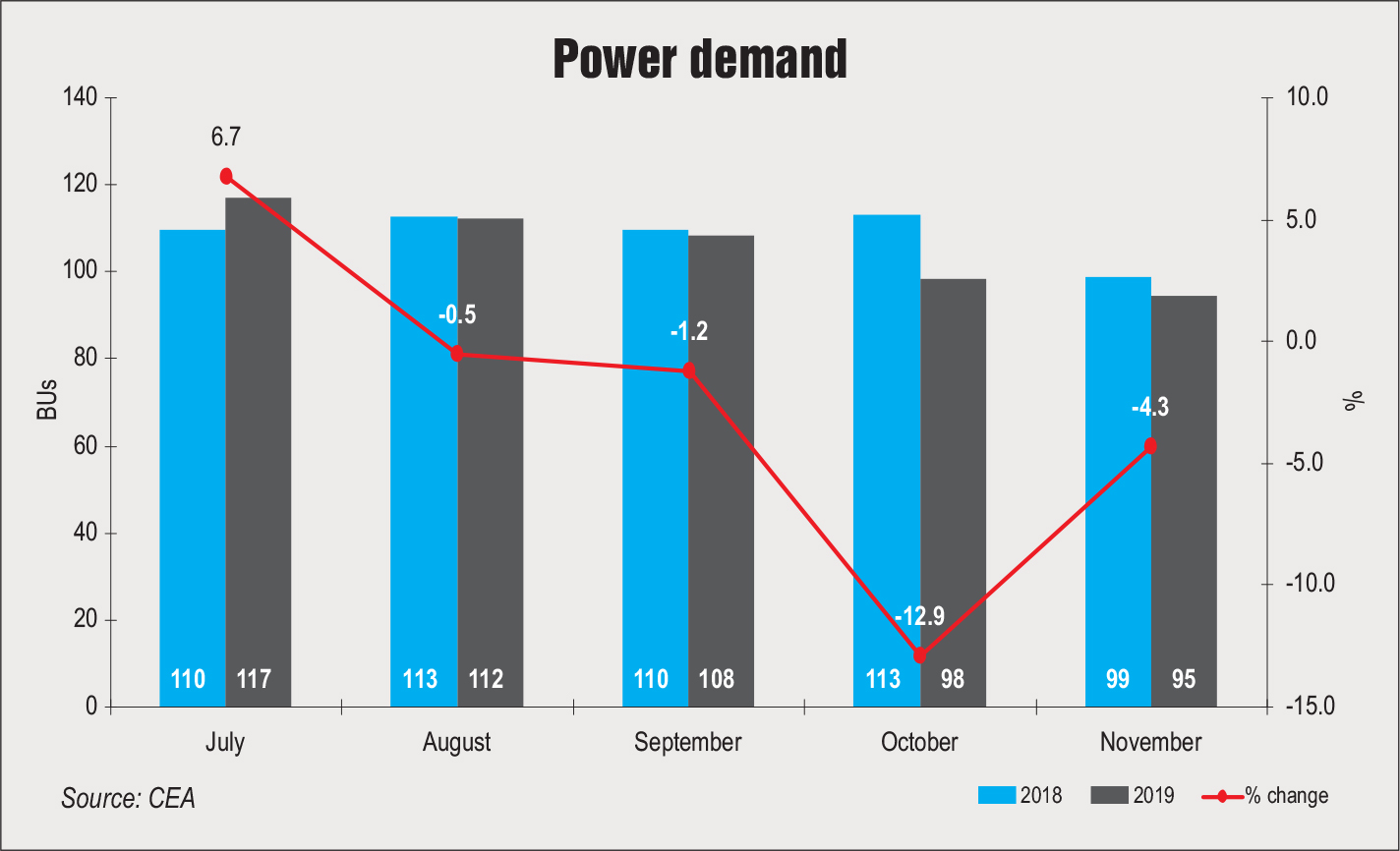 According to the Central Electricity Authority’s data, power demand stood at 94.6 BUs in November 2019, compared to 98.84 BUs during the same month in 2018. State-wise, in the first eight months (April-November) of fiscal 2020, power-hungry Maharashtra saw a demand fall of 6 per cent compared to the same period in the previous year. Other key industrialised states that reported a decline in demand during this period were Odisha, Gujarat, Madhya Pradesh and Telangana, where demand fell by 7.1 per cent, 3.7 per cent, 0.4 per cent and 3.1 per cent respectively. Other states such as Tamil Nadu, Rajasthan, Andhra Pradesh and Bihar reported a significant slowdown in year-on-year demand growth during this period.

Thermal power generators have been feeling the heat. PLFs of coal-based power plants declined to 56.6 per cent in April-October 2019 from 60.2 per cent in the previous year. Private IPPs’ PLFs touched a low of 50.43 per cent during October 2019, compared to 60.2 per cent a year ago. 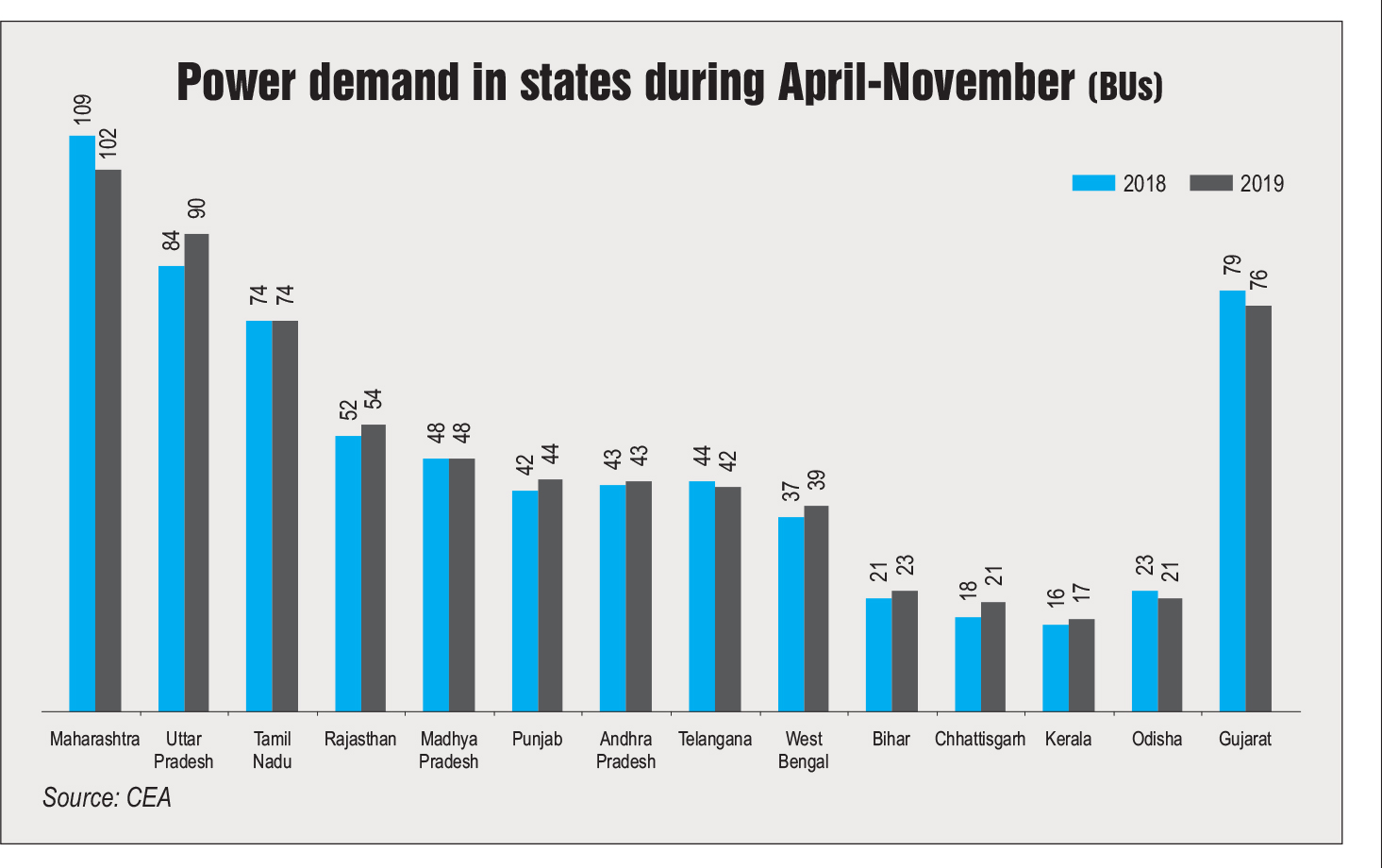 According to analysts, the slow economic activity coupled with an extended and harsh monsoon has dampened power demand growth. As per ICRA, “Demand growth has turned negative since August 2019. This can be attributed to lower demand from the household and agriculture segments following more than usual rains during the period August-October 2019 and moderate demand from the industrial segment.”

Analysts also believe that the letter of credit (LC) mechanism, which was made mandatory from August 1, 2019, has had some impact on demand. “A few discoms had faced issues owing to the implementation of the LC mechanism. Due to this, there was some impact on demand,” notes a recent equity research report by Edelweiss.

The government has, however, issued a clarification on reports regarding the fall in demand and has called them inaccurate. According to the Ministry of Power, “Higher rainfall during October 2019 (35 per cent above normal) has led to a reduction in power demand by the agricultural sector and in cooling requirement by the domestic and commercial sectors.” It adds that the monthly growth in electrical energy availability in the country was in the range of 6.5 per cent to 8.5 per cent from April to July 2019. Growth during the first quarter of the current year was around 7.5 per cent and in July, it was 6.7 per cent. On PLFs, the statement says, “The reduction in overall generation was not attributable to the lower PLF of thermal generation; rather, we have been able to change the energy mix in order to reduce our carbon footprint.”

The recent spate of poor data has prompted cautious positive predictions for demand growth in fiscal 2020. Analysts foresee demand growth to be weak during the second half of fiscal 2020 on account of a high base and tepid economic activity.

ICRA has recently revised its year-end outlook from stable to negative. “ICRA expects subdued energy demand growth coupled with higher generation from hydro, nuclear and renewable sources to suppress average capacity utilisation of coal-fuelled power plants to about 59 per cent in fiscal 2020 from about 61 per cent in fiscal 2019. Nonetheless, the same is expected to show a gradual recovery over the medium term with the decommissioning of older thermal projects, slow pace of new capacity addition and expectations of recovery in industrial energy demand,” stated the agency. 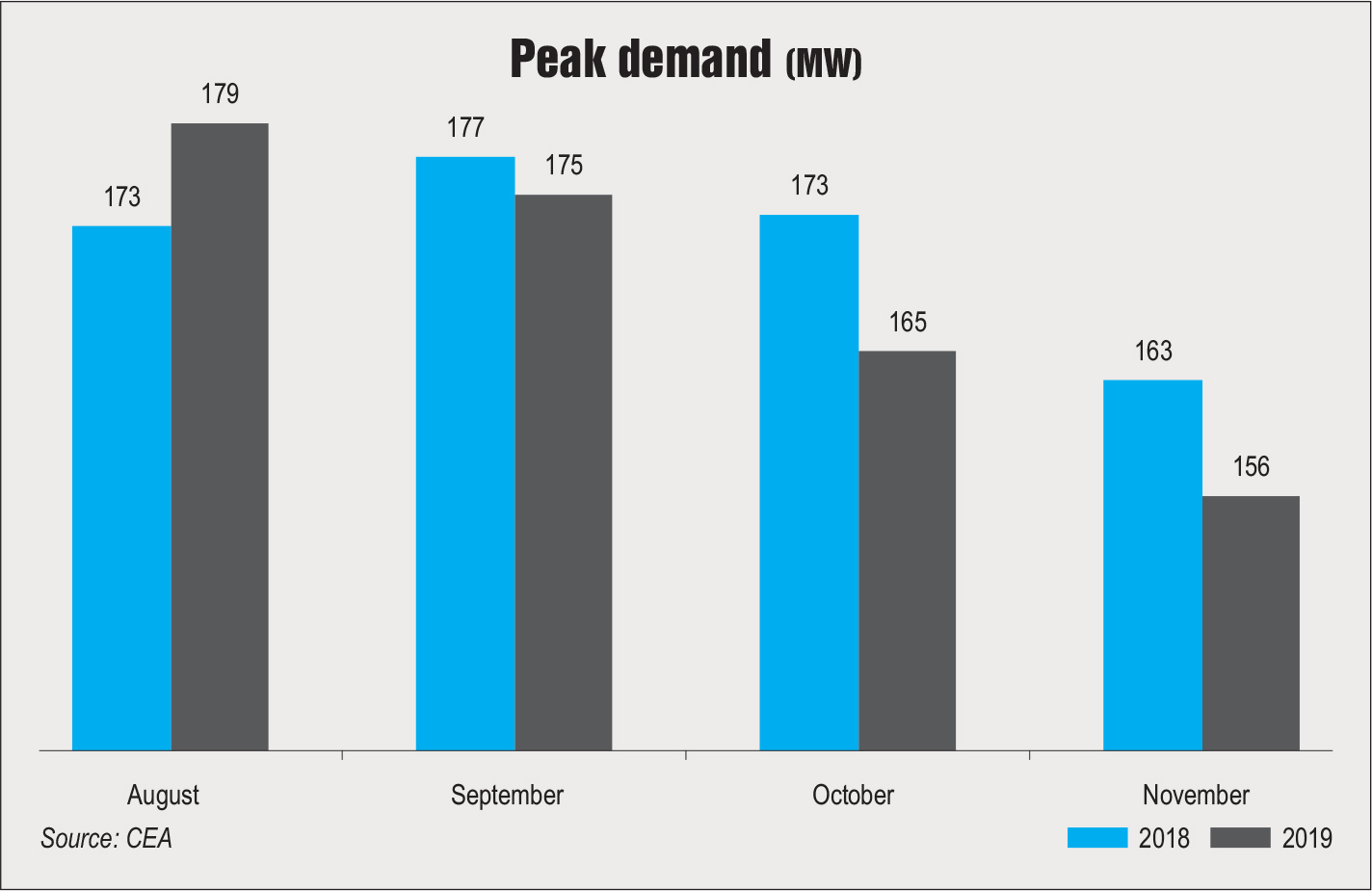 On its part, the government has several remedies in the works. Apart from the New Tariff Policy, which is awaiting cabinet approval, and the amendments to the Electricity Act, 2003, which are expected to be introduced in the winter session and to bring in consumer- and investor-friendly reforms, the power ministry is also relooking at the PPA mechanism. In a recent reply to a question in the Lok Sabha, the power minister stated that the ministry had formed a high-level group to study the current system of power purchase and sale under PPAs, including power trading. The group will also explore the power market system globally and make recommendations for changing the structure and system of power purchase and sale in the country, including the reforms needed to encourage investments, efficiency and competitiveness in the power market.

As per recent media reports, the centre is also considering a new loan window for states. Under this plan, state-run lenders Power Finance Corporation, Rural Electrification Corporation and Indian Renewable Energy Development Agency will offer loans at concessional rates to discoms. The new loan window is expected to help in settling some of the dues that discoms owe to gencos. As per data from the PRAAPTI dashboard, these stood at more than Rs 800 billion as of September 2019.

In sum, the big picture for the power sector is not pretty. While there are no easy solutions to combat the downturn, it is important that the distress signs are seen as a deep structural issue rather than merely as a short-run one.