As the country has set an ambitious target of generating 40 per cent of electricity from non-fossil sources by 2030, the share of renewables is expected to increase significantly in the coming years. While we are on track to achieve the 175 GW of renewables target by 2022, the future targets would be even more ambitious. In fact, in September 2019, the prime minister announced a target of 450 GW renewables at the United Nations Climate Action Summit in New York. In this scenario, energy storage systems (ESS) are expected to play a critical role in grid integration and the management of renewables across all voltage levels. The growth of electric vehicles (EVs), along with a rapid decline in battery prices, is another key driver for increased investment in ESS, particularly lithium-ion (Li-ion) batteries.

Grid stability is a key concern for discoms owing to the growing uptake of variable renewable energy sources. Managing the grid requires various technical and policy measures by discoms. ESS coupled with demand response (DR) and vehicle grid integration can provide the much needed flexibility to the grid.

With a target of 40 GW by 2022, rooftop photovoltaic (RTPV) solar will contribute to a significant share of planned renewable energy capacity. RTPV capacities have already been growing steadily driven by robust policies, the declining cost of PV panels and increasing utility tariffs. The increased penetration of distributed energy sources, particularly solar PV and small wind turbines, is affecting grid stability on the medium voltage (MV) and low voltage (LV) distribution networks. The anticipated penetration of EVs with a national vision of 100 per cent electrification of transportation by 2030 will further affect the grid stability. ESS is one of the key solutions to ensuring grid stability and reducing variability in RTPV output.

Although pilot projects with ESS are being carried out by Power Grid Corporation of India Limited, utilities face a dilemma while choosing the technology and solutions for ESS. The increasing share of solar power generation that is non-synchronous in nature reduces the inertia of the grid, which is vital for grid stability. There is an increasing tendency to adopt batteries as ESS owing to their declining cost, but batteries are failing to support the grid with inertia. Other ESS, such as compressed air energy storage (CAES) and flywheels, could add inertia to the grid. The cost of various ESS technologies have been on the decline over the past few years, but only Li-ion batteries have reached the inflection point to become commercially viable for grid applications. Further, transmission companies need to deploy energy storage systems at grid-level substations for grid support. Other areas of ESS application include telecom towers, data centres, UPS and inverters, and diesel genset (DG) replacement.

ESS deployment is increasing globally. As per the US Department of Energy, almost 177 GW of energy storage systems were installed at the grid level till mid-2018, and over 95 per cent of them were pumped hydro storage plants. Over 14 GW of new pumped storage projects were announced across the world in 2018. However, due to their long gestation period, these projects will be commissioned by 2030. In 2018, over 4 GWh of battery energy storage systems (BESS) were either under-construction, contracted or announced. Of over 4 GW of BESS projects in the pipeline, more than 80 per cent were based on Li-ion batteries. Most of these Li-ion battery projects were grid connected and rest of them were for behind-the-meter applications. Apart from BESS, other mechanical storage technologies such as flywheels, gravitational ESS and modular CAES account for about 200 MW of contracted, under construction or announced projects globally.

In 2017, the India Energy Storage Alliance (IESA) estimated that over 1 GWh of electrochemical energy storage solutions were deployed at the grid scale. Grid-scale energy storage installations in India are mostly in the form of pumped hydro storage plants with a capacity of 4.8 GW. The deployment of large-scale BESS projects in India started in 2017, with Powergrid installing its first pilot project for frequency regulation. The projects have been designed for multiple grid service applications, but in the initial operation period they have been used for frequency regulation services. 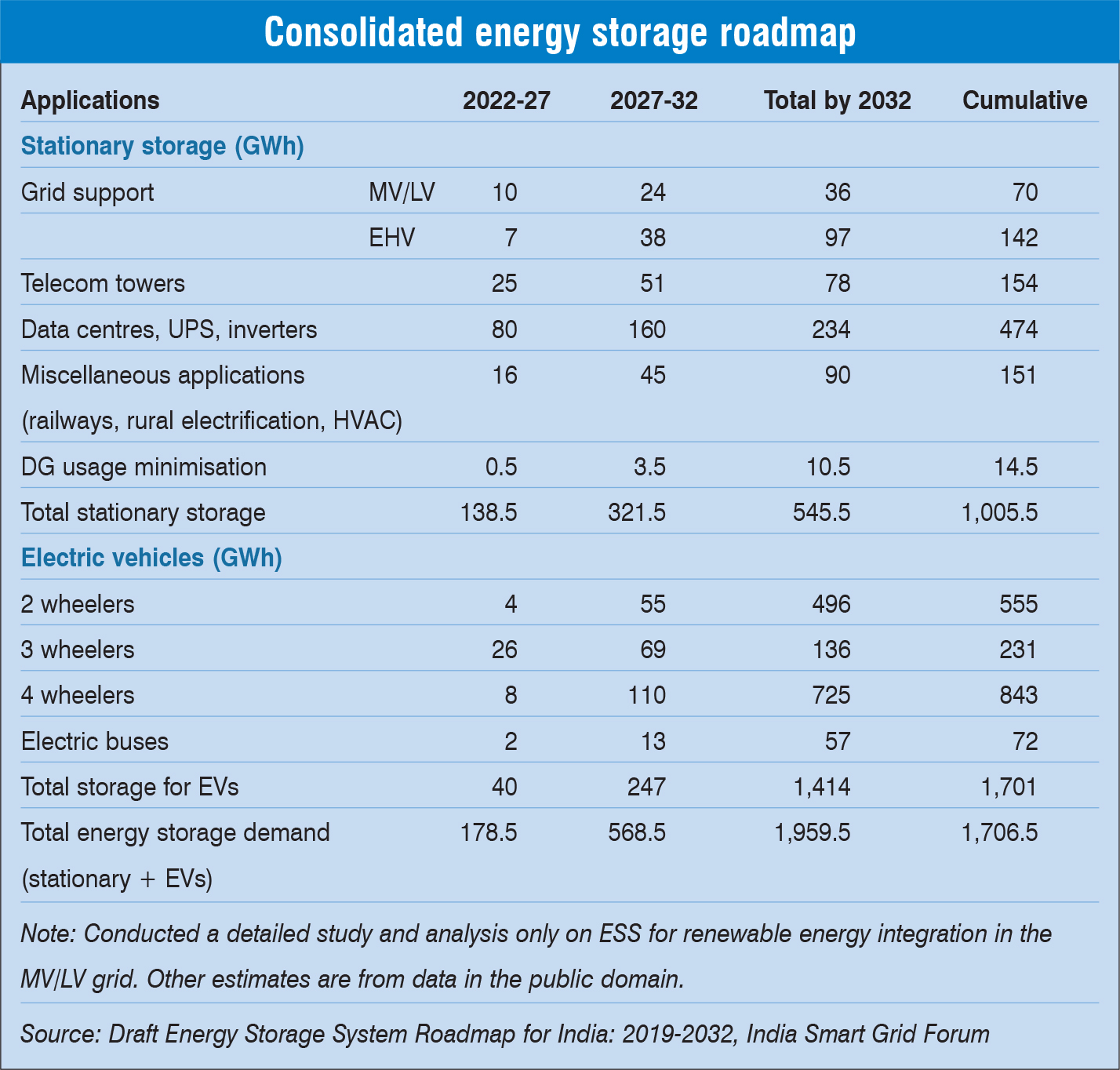 The ISGF has estimated ESS requirements in India for the periods 2019-2022, 2022-2027 and 2027-2032 for different applications. The overall energy storage requirement of all end-use applications/sectors is estimated at 2,706.5 GWh by 2032 (see Table). The future ESS demand estimates exclude super capacitors, flywheels and compressed air energy storage, which are far more expensive than the latest range of Li-ion batteries, and have their own limitations with regard to size, location, cost, etc. Also, pumped storage plants have not been considered as these projects have not made much progress in the past two decades. Therefore, batteries have been considered as the ESS of choice for various applications for the forecast period. The various applications of the forecasted ESS demand are:

E-mobility: The ESS requirement for meeting the e-mobility targets is highest among all applications. With the rapid cost reduction of Li-ion batteries due to global scaling up of manufacturing capacity as well as the anticipated launch of giga-scale Li-ion battery factories in India, it is expected that this trend will gain momentum from 2023. The reduced total cost of ownership for most user segments will drive the adoption of EVs in the country. The total battery requirement for EVs by 2032 is likely to be around 1,721 GWh as per IESA.

Other applications: The ESS requirement for telecom towers is pegged at 154 GWh; for data centres, UPS and inverters at 474 GWh; and for DG set replacement at 14.5 GWh. In addition, ESS demand for other miscellaneous applications such as railways, rural electrification, and heating, ventilation and air conditioning, etc., stands at 151 GWh (as per IESA).

In order to address the challenges associated with energy transition, policymakers need to integrate energy storage in the energy master plan. Energy storage is also needed to qualify for multiple streams of revenue for the individual services it provides to the grid. Further, time-of-use tariffs and the pay-for-services model should be introduced to eliminate price distortions and increase transparency. These is a need to incentivise development and financing of energy storage and distributed renewable energy projects, and support demonstration projects and first movers with loan guarantees, low interest loans, grants, etc. Also, the policies and incentives should not be technology specific to ensure the balanced growth of ESS solutions.