Regular operations and maintenance (O&M) is crucial to prevent  plant failures that can stall electricity generation and affect a genco’s earnings. Under the current regulatory framework, hydroelectric projects (HEPs) are required to achieve the design energy output and the normative annual plant availability factor fixed by the Central Electricity Regulatory Commission to recover 50 per cent of the annual fixed cost (AFC). Thus, in order to meet the regulatory provisions and ensure sustainable revenues, hydropower generators must regularly undertake O&M.

One of the key reasons for poor plant performance is sedimentation or silt erosion, which impacts reservoir capacity and the functioning of underwater parts. The Himalayan rivers carry a huge amount of sediment during the monsoon season. In fact, over 80 per cent of the average annual sediment comes during the monsoon season. Therefore, efficient sediment management techniques are required, especially in this season, to protect the economic and useful life of HEPs.

NHPC’s power stations in the northern and north-eastern regions of the country face severe silt erosion problems. These include Bairasiul, Dhauliganga, Dulhasti, Rangit and Teesta V. The energy losses of NHPC due to high silt and reservoir flushing have ranged between 374 MUs and 544 MUs in the past six years, accounting for 1.7-2.5 per cent of total energy generated. Thus, it is imperative for gencos to implement sediment management techniques.

There are three basic techniques to manage sediment deposits at HEPs located on Himalayan rivers. These are drawdown flushing, drawdown sluicing and provision of desilting chambers. Drawdown flushing is recommended in small-sized reservoirs, preferably once a month during the monsoon. This is an internationally accepted practice and is being followed in all small-sized run-of-the-river projects of NHPC. The process re-mobilises the deposited sediment, which passes through the spillway.

Drawdown sluicing involves maintaining the reservoir level close to the minimum drawdown level during the monsoon. This is also an internationally accepted practice that helps to pass a large quantum of the incoming sediment through the spillway and reduce the trap efficiency. Another solution is providing desilting chambers in the water conductor system for removal of coarser sediment particles to avoid their entry into turbines.

Further, in order to prevent damage to the underwater parts of HEPs due to silt erosion, coating of these parts with hard materials is carried out. NHPC has carried out high velocity oxygen fuel (HVOF) coating of runners, guide vanes, cheek plates, etc. at affected HEPs to address the abrasion/erosion problem. HVOF coating is a thermal spray coating process used to improve a component’s surface properties to extend its life by increasing erosion, wear resistance, and corrosion protection. A repaired and coated runner can last for three seasons, whereas an uncoated runner does not last for more than one season.

Tripping/Breakdown analysis of each event is carried out to identify the root cause of faults for early restoration. Corrective action is intimated to power stations to minimise tripping/breakdown. Power stations are monitored for forced outages/breakdown and restoration works are followed up by technical inputs and logistics support from a dedicated team. Coordinated efforts led to a reduction in NHPC’s forced outages from 5.25 per cent in 2014-15 to 0.45 per cent in 2018-19.

Gencos must ensure the availability of critical spares before the monsoon and initiate timely repairs. The performance of power stations is affected by the non-availability of high-value critical spares. These have more lead time in the manufacturing cycle. The remote location of hydropower plants adds to the problem.

NHPC has identified critical spares for each power station along with minimum and maximum inventory and reorder level. The entire procurement process – initiation of purchase, award and delivery – is monitored to ensure the availability of critical spares to carry out annual maintenance as per schedule and to meet exigencies. The spares are procured only from original equipment manufacturers as they offer reasonable prices and promise scheduled delivery. The non-disposable and dead inventory is typically kept in the power station. 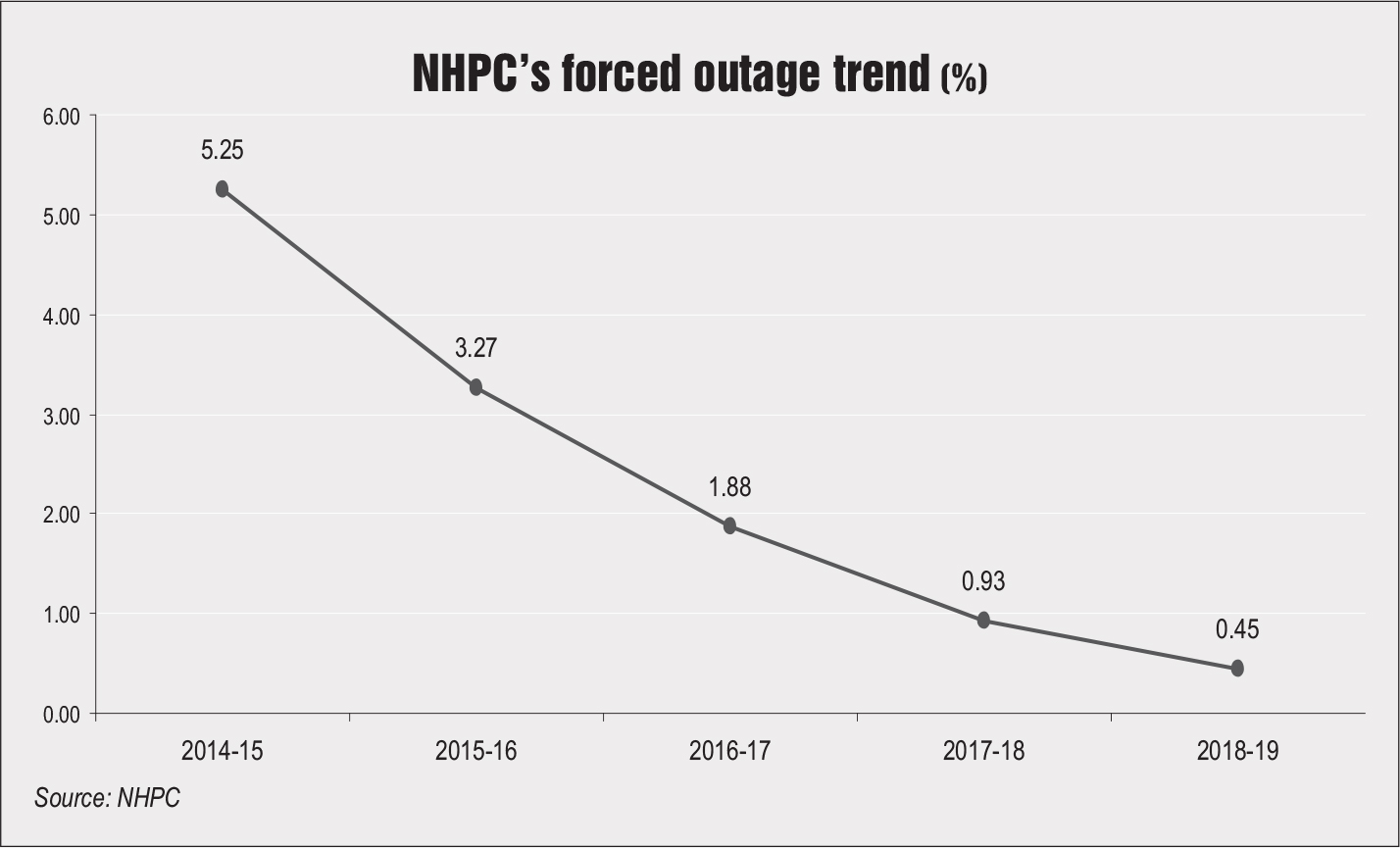 The renovation and modernisation (R&M) of HEPs is a cost-effective way to ramp up capacity, extend plant life, and improve reliability and availability. During 2017-22, 49 schemes (seven central and 42 state), with a combined capacity of 9,239 MW, are expected to be completed. NHPC is undertaking/ planning the R&M of the Bairasiul and Loktak HEPs.

The 180 MW Bairasiul power station was commissioned in April 1982 in Himachal Pradesh and completed its useful life of 35 years in March 2017. The R&M of the project is being undertaken as per regulatory provisions, with scheduled completion during 2018-21. The R&M programme is being implemented in a phased manner so that two units are available for generation while one unit is undergoing R&M. So far, the R&M of Unit 2 has been completed. It started commercial operations on December 29, 2019 after shutting down in October 2018.

Under R&M, the existing runner is being modified to increase efficiency. The efficiency of the old runner is 91.3 per cent while the weighted average efficiency of the modified runner is around 93.876 per cent as per model tests. Also, the discharge-carrying capacity of the Bhaledh feeder tunnel will be increased to 24 Cumecs. The existing generator (11 kV and 66.7 MVA rating, and 97.6 per cent efficiency) with class B insulation will be replaced with a new generator (11 kV and 74 MVA rating, and over 98 per cent efficiency) with class F insulation. Further, the existing old and obsolete electronic hydraulic governor will be replaced with a digital governor compatible with supervisory control and data acquisition (SCADA).

NHPC is also planning to undertake R&M works at the 105 MW Loktak power station in Manipur. The HEP was commissioned in June 1983 and completed its useful life of 35 years in May 2018. Post R&M, the design energy is expected to increase by 114 MUs over the existing 448 MUs. R&M works are scheduled to begin in December 2021.

NHPC is also taking steps for the automation and remote operation of its HEPs. This would enable the centralised operation of machines with less manpower, help manage frequency variations in the grid, aid in locating equipment faults precisely, generate historical data for analysis, and digitalise various operational parameters. Currently, about 15 power stations of NHPC are automated with SCADA. The implementation of SCADA in five more stations is under implementation.

Automation offers significant benefits for hydropower stations, especially those located in remote areas. For instance, remote operation of the 44 MW Chutak HEP located in Kargil (Jammu & Kashmir) has resulted in seamless functioning of the plant even during extreme weather conditions. During heavy snowfall, the road from the residential colony to the power station often gets blocked, disrupting the commute of employees deputed at the powerhouse. In order to optimise the deployment of O&M personnel at the Chutak HEP and reduce O&M expenses, initiatives have been taken to remotely operate the Chutak power station from the Nimoo Bazgo HEP, which is also located in the state.

Also, during 2017-18, the Teesta Low Dam III and Teesta Low Dam IV HEPs in West Bengal faced serious law and order problems and were under complete shutdown from July 2017 to September 2017 due to a strike by the Gorkha Janmukti Morcha. Due to the shutdown, NHPC incurred a revenue loss of Rs 1.37 billion. As a preventive measure, NHPC has taken an initiative to remotely operate TLDP-III and TLDP-IV HEPs from its regional office at Silliguri.

Going forward, NHPC plans to implement best O&M practices for its HEPs across the country. Other hydropower gencos should also take cues from the company’s O&M strategy given its extensive experience in the domain. n

Based on a presentation by S.K. Mishra, DGM (E), NHPC, at a recent Power Line conference