A pumped storage plant (PSP) stores energy in the form of gravitational potential energy, pumped from a lower elevation reservoir to a higher elevated one. During periods of peak power demand, the stored water is used to produce electric power, which is used for load balancing. The pumps of a PSP are usually run on low-cost off-peak electric power. Although the losses of the pumping process make the plant a net consumer of energy overall, the system generates higher revenue by selling more electricity during periods of peak demand, when electricity prices are the highest. PSPs allow energy from solar, wind or excess electricity from continuous base-load sources (such as coal or nuclear) to be saved for periods of higher demand.

Thermal power plants are less capable of responding to sudden changes in electrical demand, potentially causing frequency and voltage instability, however, pumped storage plants can respond to load changes within seconds. Along with energy management, PSPs help control electrical network frequency and provide reserve generation. PSPs are economical because they flatten out load variations in the grid and also help in coordinating large groups of heterogeneous generators. The round-trip energy efficiency of PSPs varies in practice between 70 per cent and 80 per cent. The technique is currently the most cost-effective means of storing large amounts of electrical energy.

The need for developing pumped storage was realised as early as in 1960. The first PSP, of capacity 700 MW, was built at the Nagarjuna Sagar dam in Telengana in 1980. Since then, 11 PSPs with a total capacity of 4,804 MW have been successfully installed. However, only seven plants with an installed capacity of 2,624 MW are working in pumped mode.

The Central Electricity Authority (CEA) has identified a potential of 96,000 MW in different parts of India (Table 2). Region-wise, the western region has the highest PSP potential at 39,684 MW due to the topographical features with steep gradients of rivers originating from the Western Ghats.

As per CEA data on under construction PSP projects (as of December 2019), three projects are under way – the 1,000 MW Tehri Stage II project in Uttarakhand, which is likely to be commissioned in 2021-23; the Koyna Left Bank (80 MW) in Maharashtra being implemented by the Water Resources Department of Maharashtra; and the Kundah Pump Storage project Stages I, II, III and IV (500 MW) in Tamil Nadu being implemented by TANGEDCO.The Kundah project is likely to be commissioned by 2022-23 (Table 3). The Tehri project by THDC Limited will be the first PSP under the central sector. 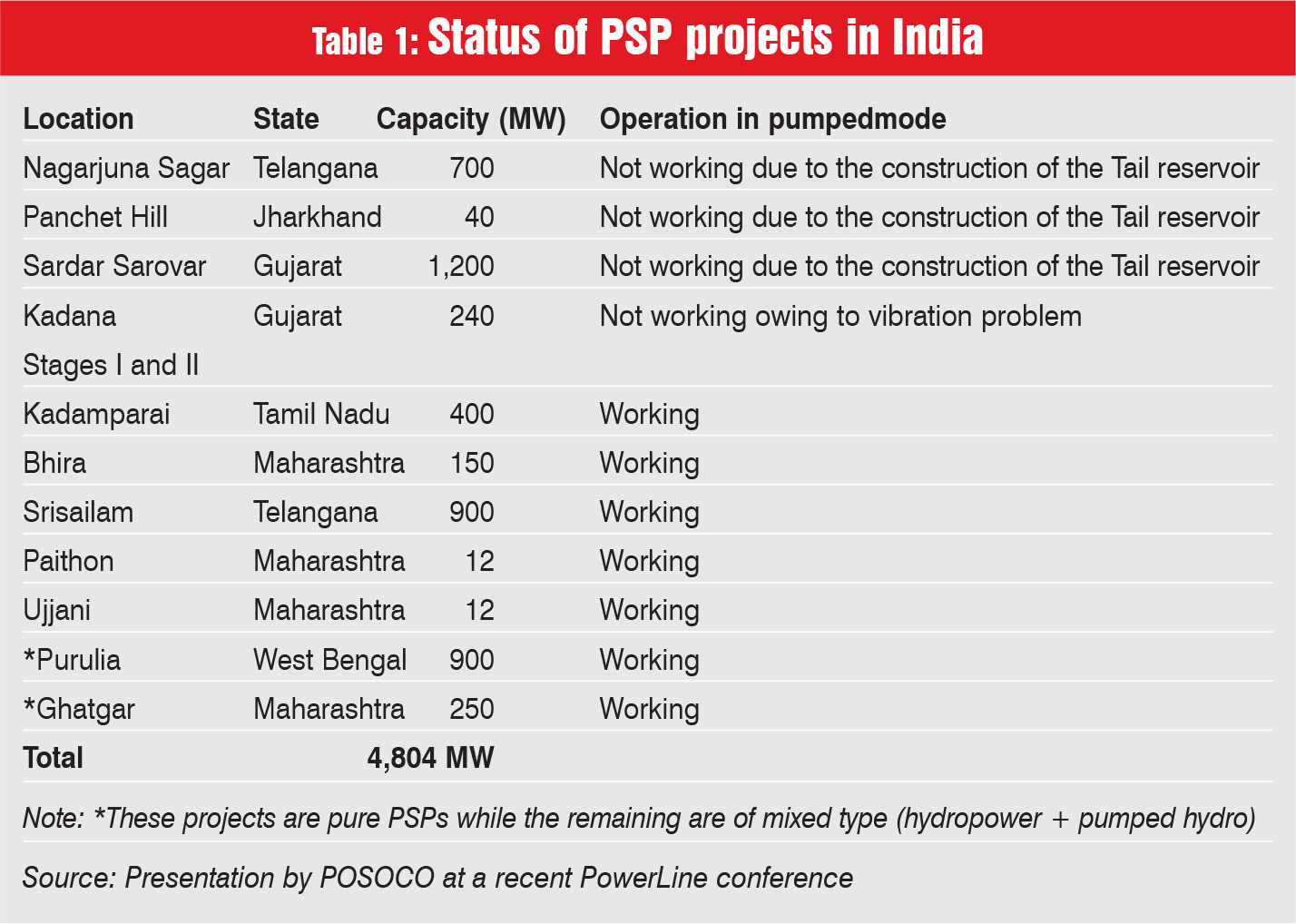 West Bengal has been a frontrunner in the promotion of pumped storage. Its 900 MW Purulia project, set up in 2007, is running successfully. The company has planned a 1,000 MW PSP project in Turga and it is expected to be commissioned by May 2027. 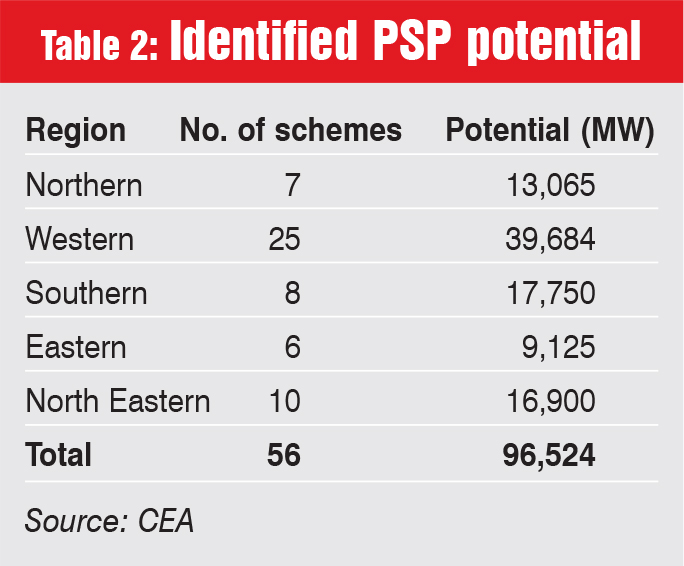 In order to increase the deployment of pumped storage plants, several issues need to be addressed.

The issue of land acquisition/transfer can be resolved by providing specific clauses for such projects in the land acquisition Act. Another challenge pertains to obtaining environment and other related clearances during the initial stage of project implementation. Such approvals need to be provided by government bodies in a time-bound manner by putting online procedures in place.

During project construction, work is often disrupted due to contractual disputes and claims. This, in turn, leads to time and cost overruns. Such problems can be resolved effectively by sharing the risks as per the pre-defined risk register and setting up a special task force that has powers to direct the state authorities.

In order to make PSPs viable and qualify for merit order despatch, they need to be treated as grid assets. A substantial portion of a PSP’s capital cost needs to be subsumed and recovered through wheeling charges. Beneficiaries who provide off-peak power will be offered peak power after accounting for losses and will have to bear the balance 20-25 per cent of the capital cost. This will help discoms to opt for pumped storage systems.

Last but not least, guidelines for the development of pumped storage need to be framed.

Pumped storage can efficiently provide ancillary grid services such as reserve generation and network frequency control. Such projects allow pumping at less than full load, thereby increasing the flexibility to integrate a PSP with wind/ solar energy. Also, a PSP does not require a large reservoir. A reasonably small reservoir in the upstream and downstream of the powerhouse with a short water conductor system can generate large amounts of power during peak demand periods.

A relatively new approach for developing pumped storage projects is to locate the reservoirs in areas that are physically separated from the existing river systems. These projects are termed as “closed-loop” pumped storage because they have minimal to no impact on the existing river systems. After the initial filling of the reservoirs, the only additional water requirement is the make-up water required to offset evaporation or seepage losses. By avoiding the existing complex aquatic systems entirely, these types of projects can greatly reduce the most significant aquatic impacts associated with project development.

Net, net, pumped hydro has a high service life (of more than 50 years) and is flexible and fast acting, which can improve the uptake of this technology.

Given the government’s large renewable energy capacity addition programme for the year 2022, pumped storage plants can play a vital role by providing balancing power. Therefore, it is important to ensure timely completion of ongoing pumped storage plants as well as add new capacity. In order to ensure 24X7 power supply, reservoir-based mega PSP projects may be considered on major rivers in upstream areas.