Reliable and quality power supply is one of the key requirements of commercial and industrial (C&I) consumers. Since poor quality power leads to production loss, damage to equipment and a reduction in operational efficiency, C&I consumers mostly rely on diesel generator (DG) sets for backup power supply. These generators are widely used owing to their low initial cost, reliability of supply and ease of installation. However, due to the increasing fuel cost, the use of DG sets is putting a burden on the operational expenses of C&I consumers. A fast emerging solution to tackle this is the hybridisation of DG sets with renewable energy systems. The capital expenditure for setting up renewable energy systems, mainly solar rooftop, has declined significantly in the past few years. By combining DG sets with solar photovoltaic (PV) systems, the intermittency of renewables is taken care of and, at the same time, reliable power supply is ensured in an economic manner. Power Line takes a look at the cost economics of DG sets…

The pricing of generators primarily depends on power rating, fuel type, compliance with standards, competition, services offered (such as annual maintenance contract and warranty), and other add-on features. The price of a 15 kVA generator varies from Rs 250,000 to Rs 300,000. Typical specifications of such generators are 230/415 Volt, diesel powered, and water/coolant cooled. These generators are mostly used in small production units equipped with two or three machines.

Meanwhile, the price of a generator with a power rating between 100 kVA and 200 kVA varies from Rs 540,000 to Rs 1,070,000. These generators find use in the construction and power sectors, as well as in medium-size industries. Inverters with higher power ratings (1,000–2,000 kVA) are available at prices upwards of Rs 15 million and are used in large to very large industries.

In the residential DG set segment, the price range is wide and based on the features offered. The price varies from Rs 32,000 for an 850 VA petrol-powered generator to Rs 73,000 for a generator with a 3 kVA power rating. The price of generators with ratings between 4 kVA and 6.5 kVA varies from Rs 101,000 to Rs 183,000. The cost of a gas-based generator is higher than that of a DG set. A 250 kV gas generator costs about Rs 4.5 million. The key features of a residential DG set are compact design, low fuel consumption, portability, safety, circuit breakers, and silent operation. Often, these generators are compatible with gas fuels and many have a self-start option. Residential DG sets are very popular with shops, showrooms, small hospitals, clinics, and residential apartments and households.

Earlier, lower capital costs of DG sets vis-à-vis other captive/backup power solutions made them a preferred choice. However, with the capital cost declining for renewable energy, especially solar PV, this segment is fast emerging as a preferred option for C&I consumers. The benchmark capital cost of wind power projects stood at about Rs 62 million per MW and that of solar PV power projects stood at Rs 53 million per MW during 2016-17. (The Central Electricity Regulatory Commission has not published updated cost figures for solar and wind power owing to the changing sector dynamics and the rapid fall in prices on account of competitive bidding.) As per India Infrastructure Research, the capital costs of rooftop and ground-mounted solar plants are around Rs 38 million per MW and Rs 35 million per MW respectively. Meanwhile, the capital cost of a wind plant is around Rs 52 million, as per the Tamil Nadu Electricity Regulatory Commission’s Generic Tariff Order for Wind Power for 2018-19.

In November 2019, diesel prices stood at $72.98 per barrel. Meanwhile, the retail selling price of diesel in Delhi (inclusive of excise duty, value-added tax [VAT] and dealer’s commission) increased from around Rs 55.49 per litre in April 2014 to around Rs 66.09 per litre in April 2019, recording a compound annual growth rate of 3.6 per cent. As of January 2020, the price of diesel stood at Rs 67.96 per litre. The increase in diesel prices has been mostly on account of the deregulation aimed at reducing the subsidy bill. As crude oil prices went up, diesel prices also increased. 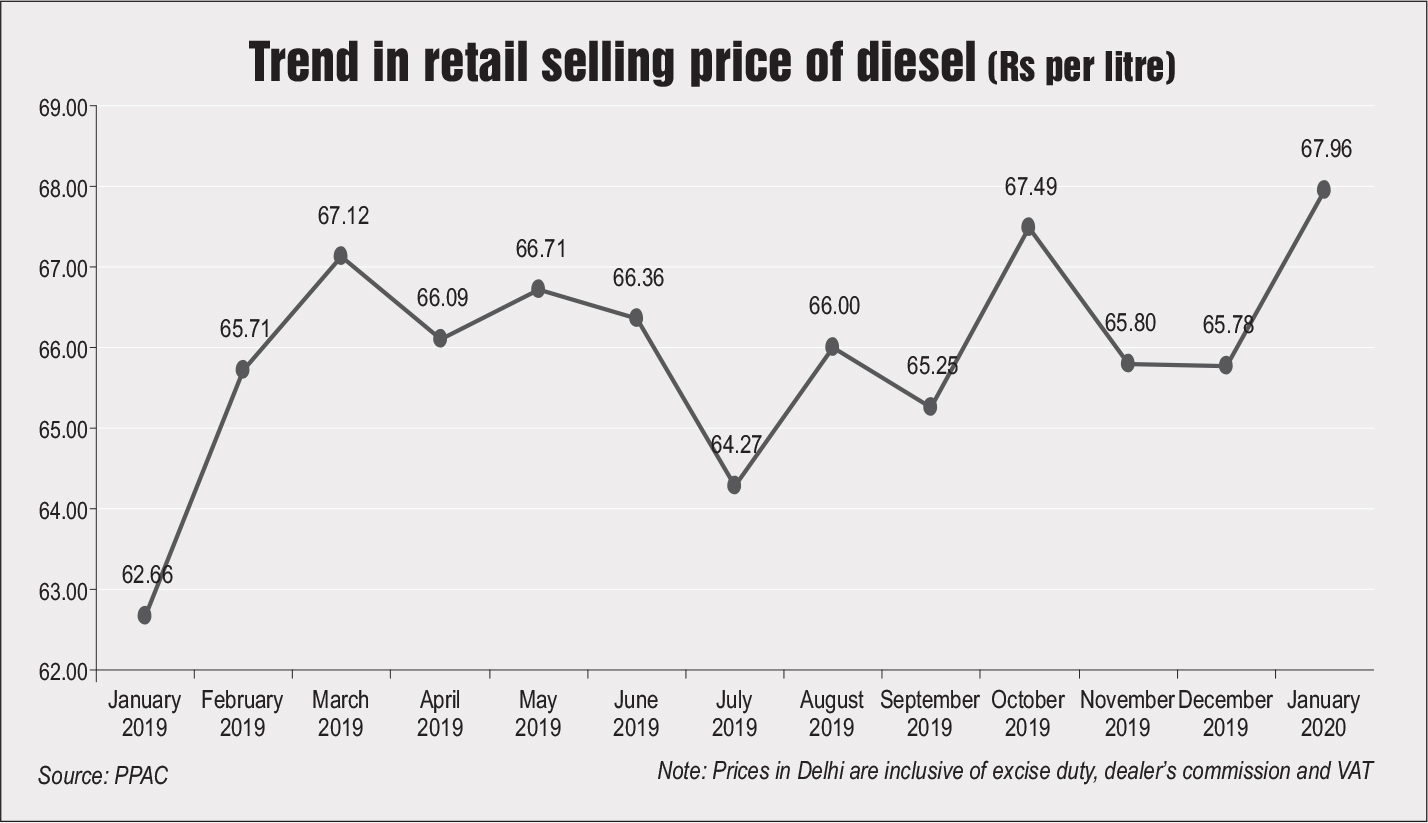 The cost of power generation from DG sets is quite high at Rs 12-Rs 15 per unit. In some cases, it is even in the range of Rs 25-Rs 40 per unit. The high generation costs can be attributed to pilferages and high costs of fuel transportation. A gas generator can provide electricity at around Rs 12 per unit. Meanwhile, wind and solar tariffs have plummeted to less than Rs 3 per unit. The operations and maintenance (O&M) costs of DG sets are also generally higher. However, the O&M expenditure and cost of DG sets depend on the quality of fuel used and the hours of operation. 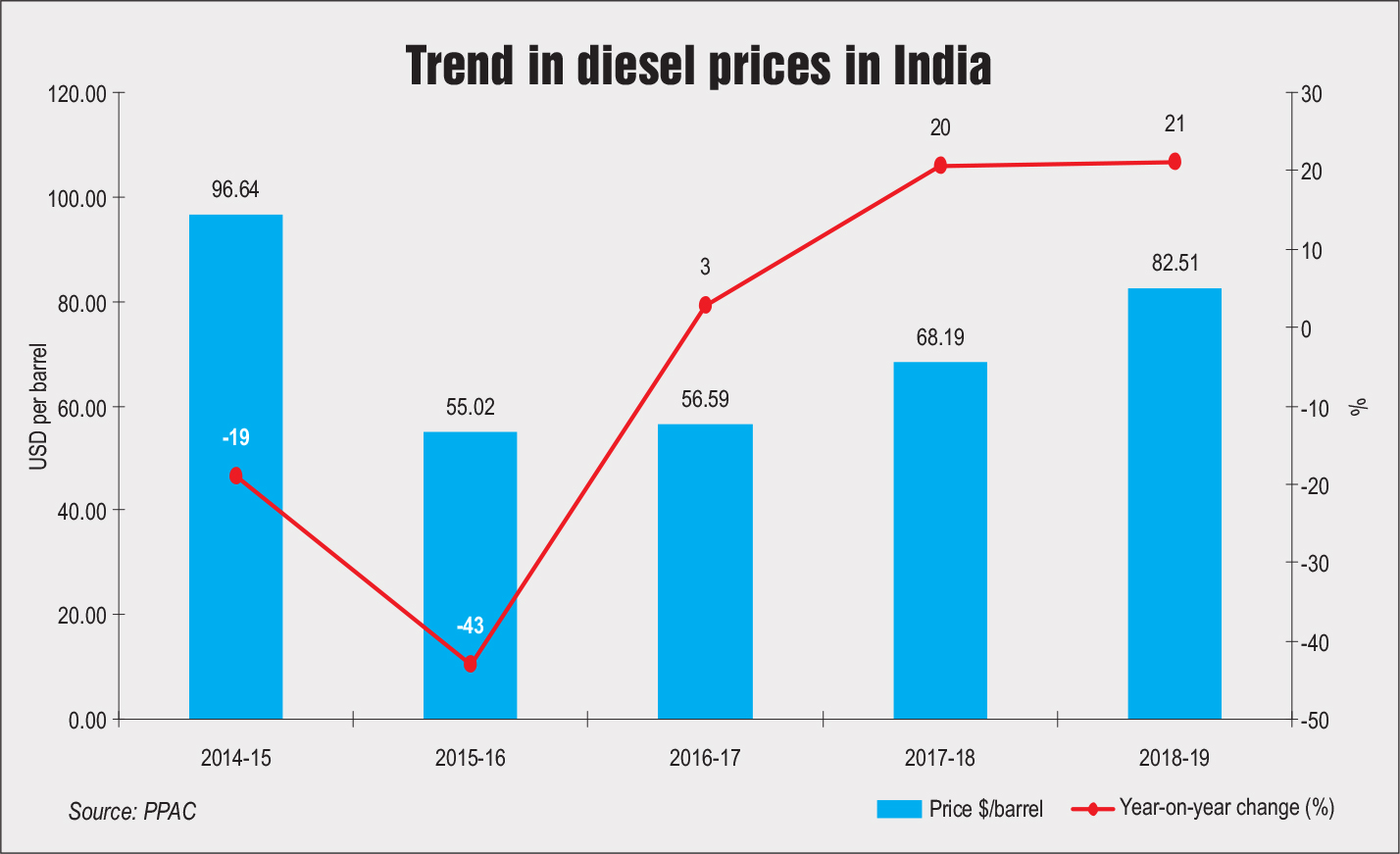 Lower costs and reliability of power supply have been the key factors driving the adoption of DG sets. However, the increase in the price of diesel has escalated the operational cost of these gensets. As a result, DG sets have become less cost competitive vis-à-vis solar rooftop systems, which are emerging as a financially viable option on the back of falling equipment prices.

However, intermittency continues to be a challenge in renewable energy generation and thus in ensuring reliable power supply. Given that incorporating energy storage significantly increases the overall solar PV system cost, the demand for DG sets is expected to continue. This is especially true for industries where continuous power supply is of critical importance. Solar PV-DG hybrid systems can combine the benefits of renewable energy and diesel gensets as well as offer an effective solution towards fuel cost reduction. Such systems will also ensure reliable power supply and drive synergy in performance.