After a long period of policy inaction, the hydropower policy was announced in March 2019, providing the much needed impetus to hydropower development in the country. One of the key highlights of the policy has been the decision to categorise large hydroelectric projects (HEPs) as renewable energy sources, allowing developers access to low cost and long-term finance for their projects. Besides, the policy has proposed separate hydropower obligation (HPO) targets, and the provision of grants for setting up enabling infrastructure and for flood moderation. Apart from this, due to growing renewable energy penetration, hydropower has assumed a critical role in grid balancing. HEPs allow frequent ramping and part-load operations, making them suitable for grid balancing.

As of November 2019, the installed hydropower capacity in the country stood at 45,399 MW. Between 2014-15 and 2018-19, the hydropower capacity grew at a CAGR of 2.41 per cent to reach 45 GW. However, hydro capacity addition has witnessed a slowdown in recent years. During 2018-19, around 106 MW of capacity was added, the lowest in the past five years. Further, between April and November 2019, no new HEP was commissioned. Hydropower accounts for 12 per cent of the total installed capacity, as against a share of 63 per cent occupied by thermal capacity and 23 per cent by renewables.

In March 2019, the cabinet approved a slew of measures for the hydropower segment, including the decision to give renewable energy status to large hydropower projects. Earlier, only hydro projects of up to 25 MW were considered as renewables and were eligible for incentives such as financial assistance and cheaper credit. Also, HPOs will be identified as a separate entity within the non-solar renewable purchase obligation category. This means that the state distribution utilities will have to meet a certain proportion of their total power requirement through hydropower. This will facilitate the signing of power purchase agreements and enable the financial closure of hydropower projects. The power ministry is likely to finalise the HPO trajectory by next month, which would then be notified by the state regulators.

In addition, tariff rationalisation measures have been introduced to provide flexibility to developers to determine tariffs by back-loading them after increasing the project life to 40 years, increasing the debt repayment period to 18 years and introducing an escalating tariff of 2 per cent. Further, budgetary support has been provided for funding the flood moderation component of HEPs on a case-by-case basis. Budgetary support will be provided for funding the cost of enabling infrastructure such as roads and bridges, with a limit of Rs 15 million per MW for projects up to 200 MW and of Rs 10 million per MW for projects above 200 MW. 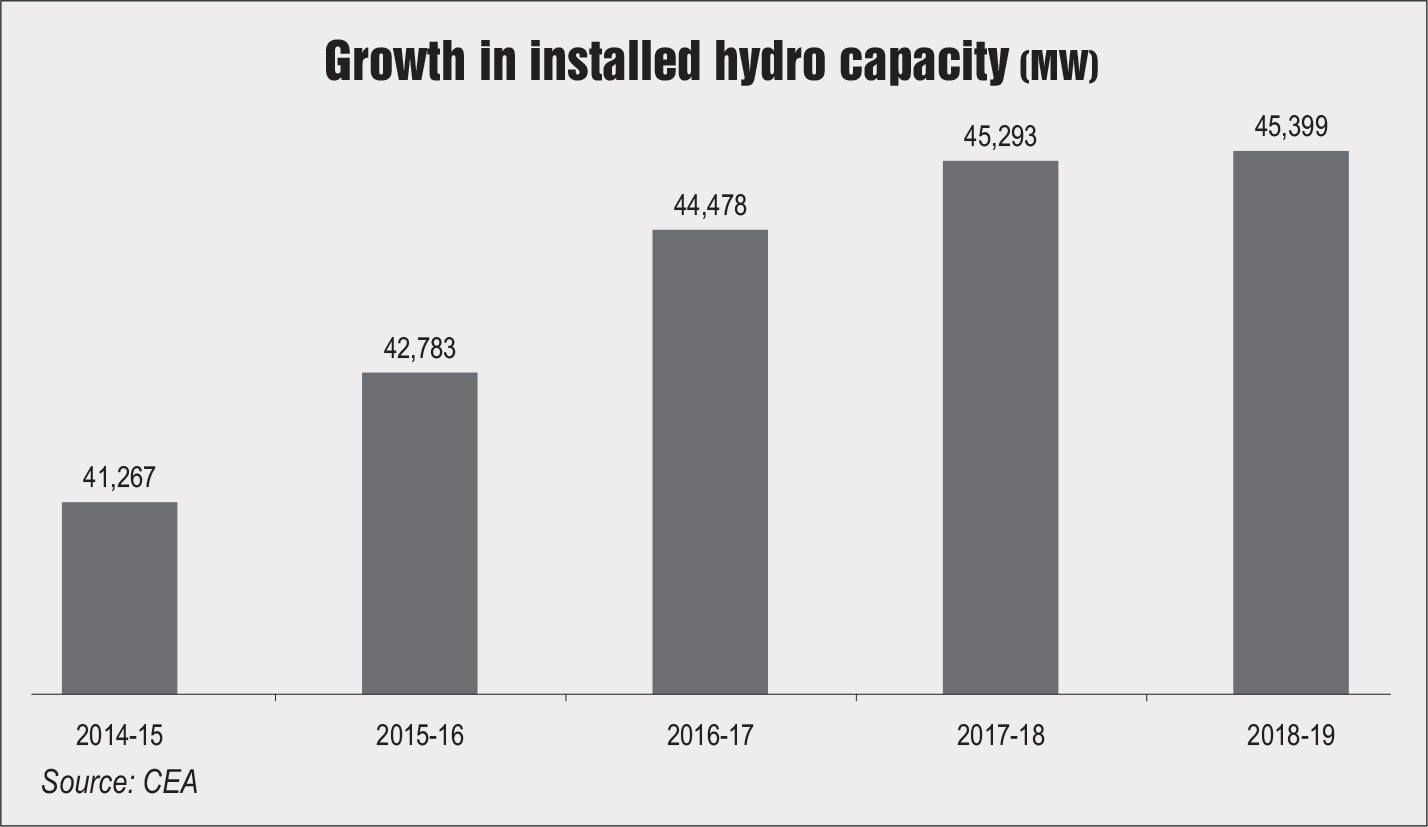 In another key development, in October 2019, NHPC started the construction work at the 2,000 MW Lower Subansiri HEP located on the border of Assam and Arunachal Pradesh, after receiving approval from the Assam government. The initial cost of the project was Rs 62.85 billion, which later increased three times. The revised cost estimate of the project is Rs 194 billion. Apart from this, in July 2019, the Cabinet Committee on Economic Affairs (CCEA) approved NHPC Limited’s 2,880 MW Dibang multipurpose project in Arunachal Pradesh. The CCEA approved an expenditure of Rs 16 billion for various pre-investment activities and for obtaining clearances for the project. The cost of the project is estimated at Rs 280.8 billion. The tenders for the project have been released. Once completed, this will be the largest HEP in the country.

In March 2019, the cabinet approved an investment of Rs 42.87 billion for the construction of the 624 MW Kiru HEP. The project will be implemented by Chenab Valley Power Projects Private Limited, a joint venture of NHPC, Jammu & Kashmir State Power Development Corporation Limited and PTC India Limited, with an equity shareholding of 49 per cent, 49 per cent and 2 per cent, respectively. 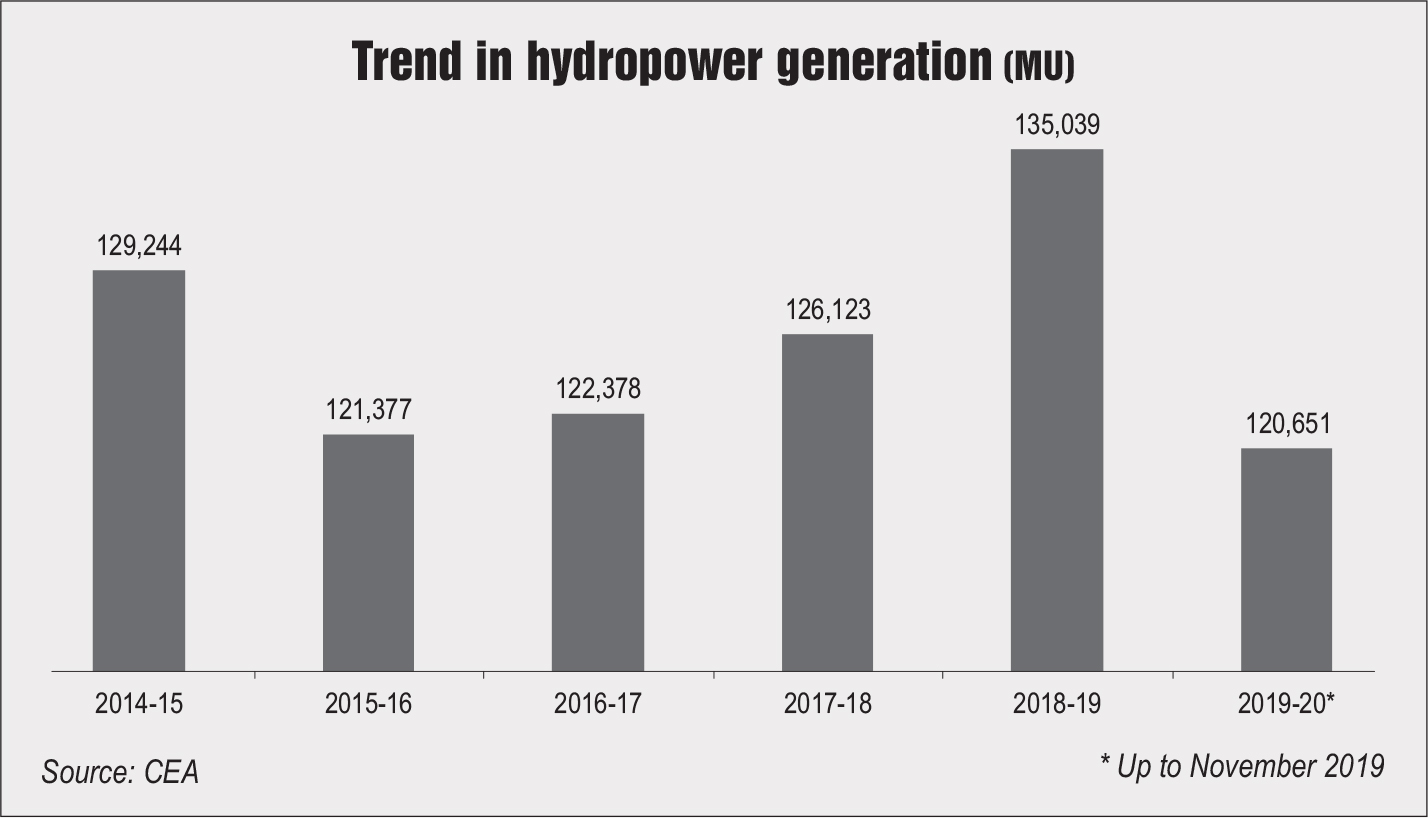 Over the past couple of years, India’s renewable energy capacity has grown rapidly. A national target has been set for installing 450 GW of renewable energy by 2030. However, renewable energy is intermittent in nature and poses a threat to grid stability. In this context, hydropower holds the potential to maintain grid stability by offering flexibility services such as frequent ramping, part load operation, spinning reserve, energy storage, black start and multiple start-stop operation.

In order to study the role of hydropower in grid balancing, the Central Electricity Regulatory Commission implemented fast response ancillary services (FRAS) across central sector HEPs on a pilot basis from November 26, 2018 to May 31, 2019. FRAS was implemented in 20 HEPs totalling 8,624 MW, with pondage/storage facilities, in the north, east and north-eastern regions. Under the project, 5-minute metering was undertaken to utilise hydro generation for the provision of ancillary services. During the period of the study, around 45 FRAS up, 423 FRAS down, and 1,143 inverse or counter instructions were issued. As per Power System Operation Corporation Limited’s report, “FRAS Implementation in the Indian Grid: Pilot Project Experience and Feedback”, FRAS helped in handling the sudden change in frequency in a centralised manner, thereby acting as a vital tool for system operators to handle imbalances at the national level. During the 5-minute time blocks in which FRAS was despatched, it was observed that the frequency remained within the band stipulated by the Indian Electricity Grid Code for 66 per cent of the time. After the implementation of FRAS, the number of frequency excursions above 50 Hz and below 49.7 Hz also reduced. Besides, the implementation of FRAS helped in better ramp management and real-time congestion management.

For grid balancing purposes, pumped storage plants (PSPs) are being recognised as one of the largest forms of storage available at a competitive cost. PSP is a mature and dependable technology, and offers loading ramp rates as fast as, or even faster than, typical gas-based plants. PSPs offer ancillary benefits such as firming capacity, reserves, voltage support, and black-start facility.

HEP developers in the country are facing various challenge sincluding cost and time overruns and geological surprises during construction. These projects also have a long gestation period. Often, HEPs that appeared attractive at the DPR stage are stalled at a later stage. The time and cost overruns encountered during project construction escalate the overall cost of projects. Other issues pertain to provisions such as free supply of power to the host state, absence of long-term power procurement bids by discoms, and lack of skilled engineering, procurement and construction contractors. Apart from this, various legacy issues pertaining to clearances, land acquisition and resettlement and rehabilitation continue to hamper the development of the hydropower sector.

Essentially, the entire hydro value chain is fraught with risks, making these projects financially challenging. As a result, private investment in this segment lags behind that in the thermal and renewable energy segments. The share of private players in the installed hydropower capacity is only 7 per cent vis-à-vis 40 per cent in thermal and 95 per cent in wind and solar.

As of September 2019, 36 HEPs (above 25 MW) totalling 12,410 MW are under construction. Of the total capacity, 7,215 MW is being developed by the central sector, 2,713 MW by the state sector, and 2,482 MW by the private sector. These projects are expected to be commissioned by 2024-25. Of the under-construction projects, 24 HEPs totalling 9,703 MW are facing no major constraints while 12 HEPs totalling 2,706 MW are having major difficulties or have been stalled. Around 35 under-construction HEPs face time and cost overruns. Apart from this, a total of 36 schemes aggregating 11,217 MW in capacity are under survey and investigation. Going forward, as per the CEA’s Optimal Generation Capacity Mix, the installed hydropower capacity is estimated to reach 75 GW by 2029-30.

To conclude, the new hydropower policy is certainly a big positive for the sector. While the implementation of the new hydro policy in its true spirit is essential, there is also a need for concerted efforts by the central government, the state governments and local authorities. Notably, various states including Jammu & Kashmir and Himachal Pradesh are undertaking initiatives to promote the hydropower sector. These include deferring free hydropower and foregoing various state-level taxes. These initiatives are expected to lower the concerns associated with HEP development and ensure ease of funding in the coming years.