Access to electricity plays an important role in ensuring progress and prosperity of humankind in multifaceted ways. The role of electricity as a key driver of sustainable development is now widely recognised by the global community, as evidenced by the fact that the Sustainable Development Goals (set by the United Nations General Assembly in 2015 for the year 2030) include access to affordable, reliable, sustainable and modern energy.

While the population residing in urban areas, by virtue of its proximity to industrial areas and commercial hubs, has always had priority access to electricity, the rural population of the country has lagged behind. The importance of rural electrification for the overall growth of a country cannot be emphasised enough, as it enables economic growth thus empowering its citizens.

Much of the progress in rural electrification was driven by the Rajiv Gandhi Grameen Vidyutikaran Yojana (RGGVY), which was launched in 2005. It gained traction in 2015 with the introduction of the Deendayal Upadhyaya Gram Jyoti Yojana (DDUJGY). While village electrification at the national level moved at a considerable pace, household electrification at the rural level improved only marginally, from 43.5 per cent to 55.3 per cent during 2001-11 (as per Census 2011).

In Jharkhand, about 76 per cent of the population resides in rural areas. The state has 29,494 villages that are spread across 24 districts, but a majority of these villages are very small in size. Less than 1 per cent of villages have a population of over 5,000 while the majority (46.7 per cent) have a population of 500 to 999. Extending infrastructure to such sparsely populated villages presents logistical as well as manpower-related challenges and is also financially unviable.

Saubhagya focused on intensive village electrification by ensuring electricity connection to rural households. Although the scheme was centrally funded, the responsibility of providing last-mile connectivity to un-electrified households was allocated to state discoms.

In Jharkhand, state electricity discom Jharkhand Bijli Vitran Nigam Limited (JBVNL) was tasked with the coverage of close to 1.3 million un-electrified households (as on 10th October, 2017) in order to achieve 100 per cent household electrification.

The process of intensive rural electrification (100 per cent coverage of un-electrified households) typically poses challenges at technical, financial, institutional, regulatory, geo-political, and law and order levels. The major challenges are:

District-wise assessment of unelectrified households was carried out for the three above-mentioned categories of households with the help of the extensive network of JBVNL field offices and on ground surveys. 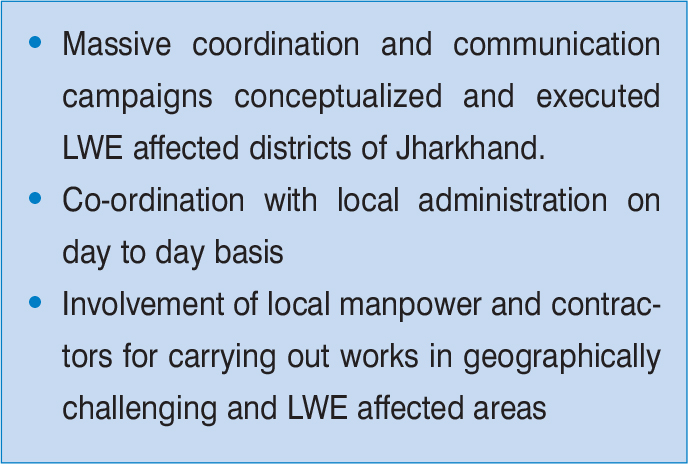 Geographic, and law and order challenges

The landscape of Jharkhand poses another challenge to grid extension projects. Administrative blocks and villages in the majority of districts are located in hilly terrain and are surrounded by dense forests making it difficult to lay electricity infrastructure. For example, districts such as Giridih, Palamu and West Singhbhum, and some blocks such as Peshrar and Lohardaga posed problems related to terrain and logistics owing to a dense forest cover and the lack of access roads to many towns and villages. Although such areas were covered under the scope of work of implementing agencies, difficult terrain and the small size of villages proved to be financially unviable for them. In such cases, JBVNL took the initiative and used its manpower and resources to extend the electricity grid. Since Jharkhand is severely affected by left wing extremism (LWE), the progress of electrification in rural areas has been slow. Notably, of the 30 districts most affected by LWE in India, 13 are in the state of Jharkhand.

Rural electrification in LWE-affected areas was carried out by establishing a communication channel between local authorities and the local central forces’ command. The villages with chronic insurgency problem were identified and special planning for setting up an electricity network was done. 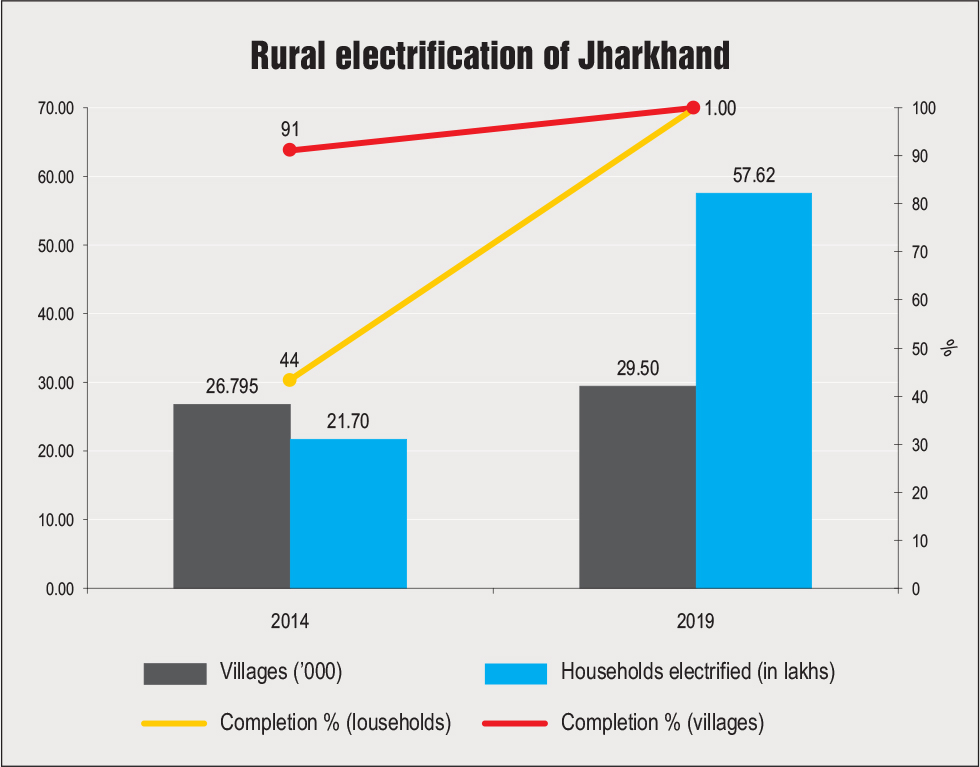 The successful execution of rural electrification programmes requires a high degree of organisational preparedness on the part of the state electricity distribution utility. A dedicated rural electrification wing was created under the ambit of the “Projects” department, which was tasked to design and allot the work packages to implementing agencies. Similarly, a dedicated manpower was allocated at the circle office level to ensure smooth coordination among various agencies.

To ensure the completion of projects within timelines envisaged by the state and central governments, a two-tier monitoring mechanism was put in place. Further, a dedicated team of project finance officers was tasked with the verification of the work completed by implementing agencies and the timely release of payments. 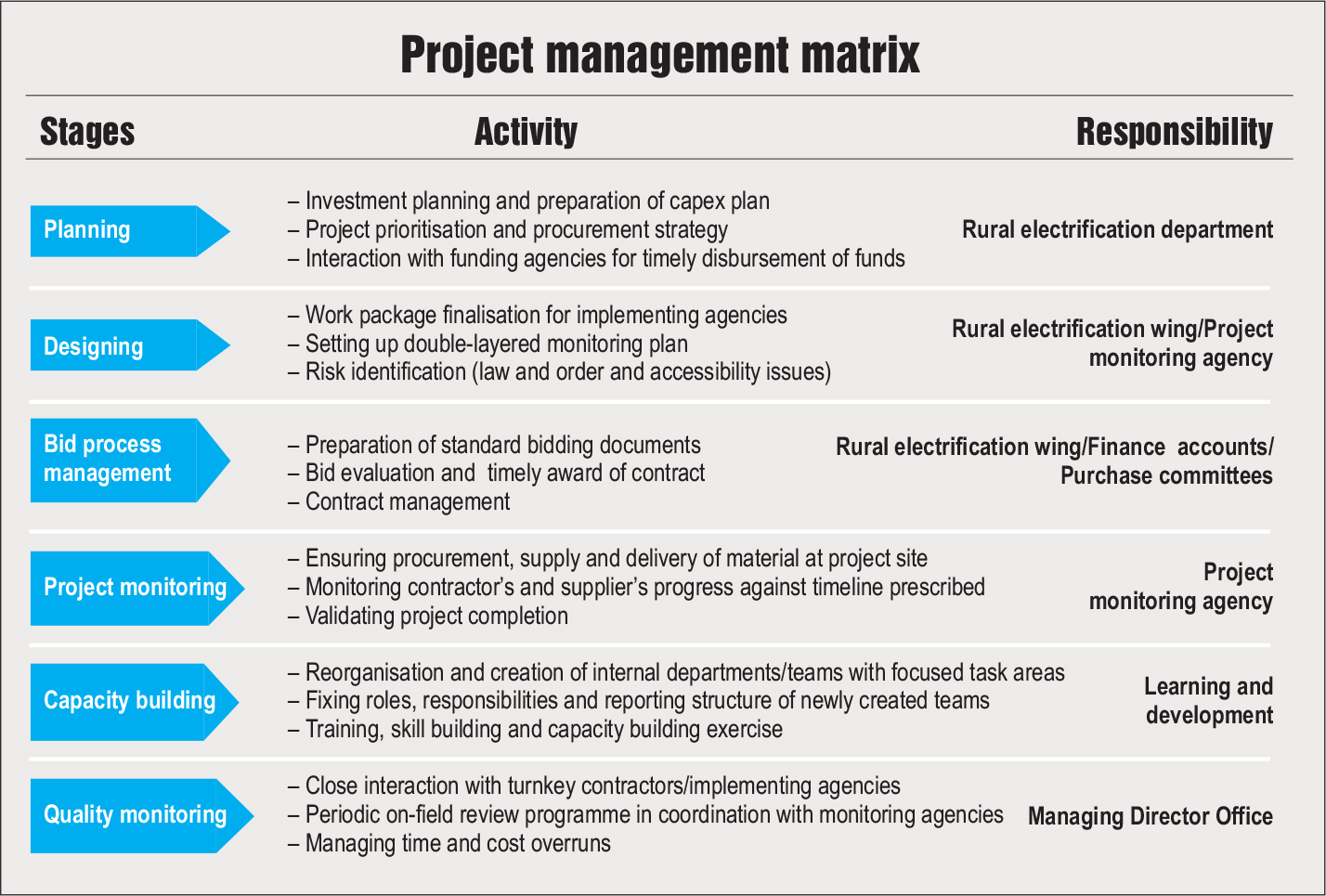 At the planning stage, work packages were designed keeping in mind business attractiveness for implementing agencies, prioritising key project elements and scheduling accurate timelines so as to avoid time and cost overruns.

Owing to difficult terrain, and prevailing law and order issues in some parts of Jharkhand, implementing labour-intensive infrastructure projects becomes quite a challenge and has, in the past, resulted in the abandonment of work by agencies/manpower. In order to avoid such a scenario, JBVNL proactively carried out risk analysis and devised contingency plans, and ensured timely interventions to avoid unwarranted delays during project execution. 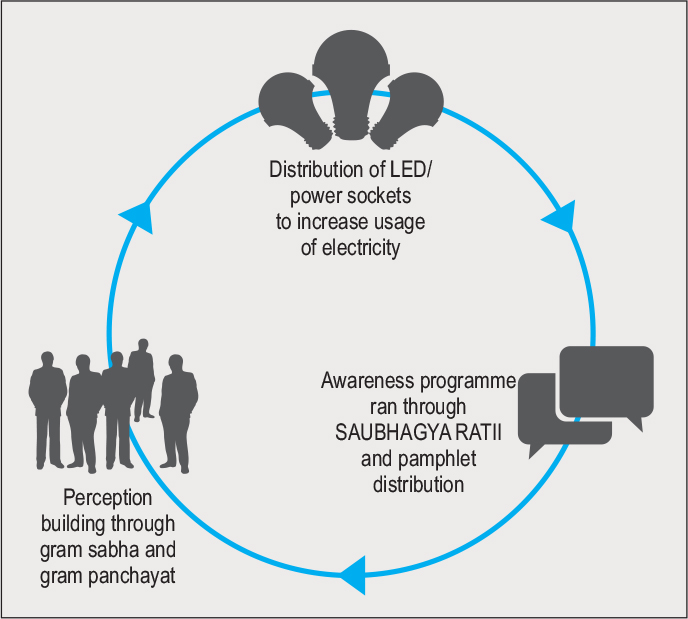 Internal committees were formed to avoid delays with regard to approval of bidding documents and award of contract to implementing agencies.

Rigorous progress monitoring of crucial parameters such as manpower management and material planning was carried out at the back end to provide necessary intervention and support to implementing agencies.

Due to the behavioural inertia to change, rural electrification programmes face considerable hurdles. In order to convince the rural population about the benefits of electricity, awareness campaigns were run. Efforts were made to persuade the entire community by involving community heads and gram panchayats. Also under Saubhagya, such unwilling household consumers were not only provided electricity connections but also given LED bulbs to create usage and demand for electricity. 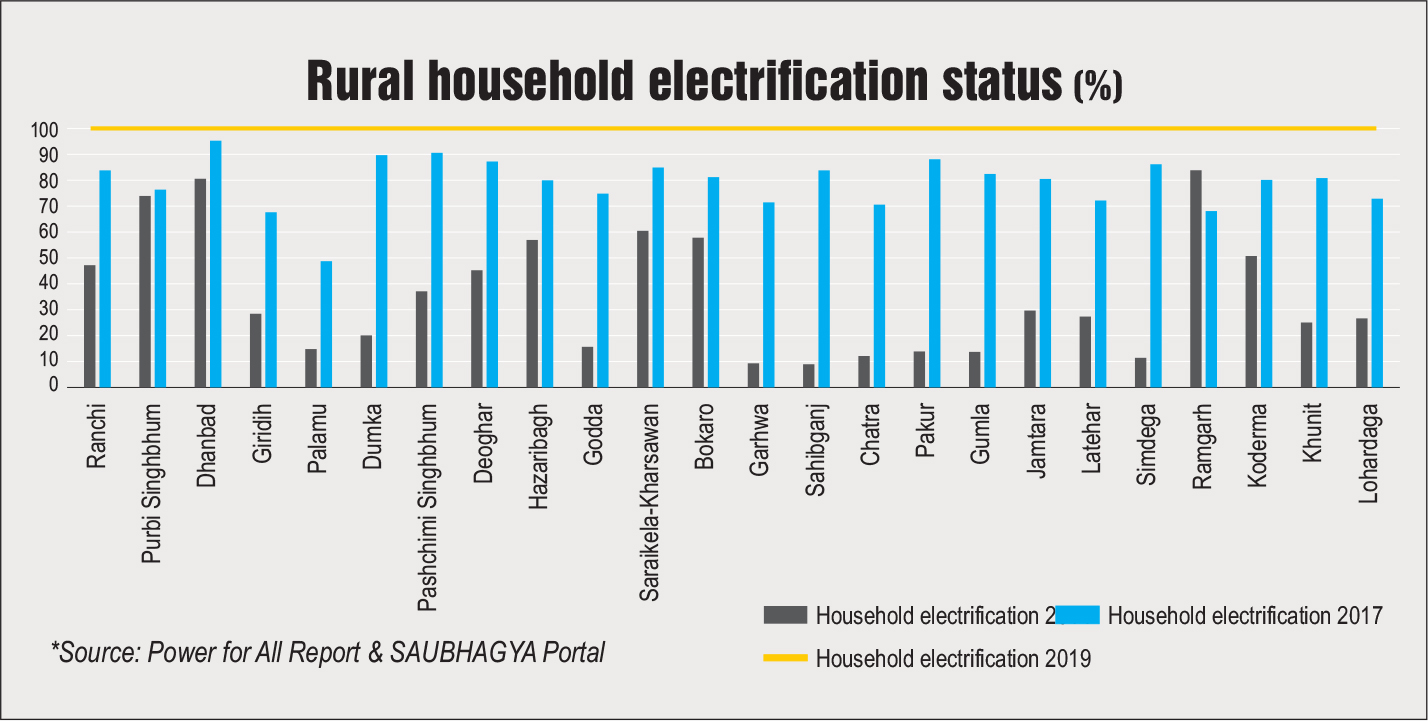 Electricity access alone on its own cannot help in realising the vision of rural electrification programmes since the issue of affordability poses a formidable barrier for the poor. The lack of purchasing power on account of irregular income patterns and the absence of financial assistance, mean that even in villages where communities as a whole have access to electricity, poor households have to forego the benefits of modern energy. This undermines the prospect of enhancing their economic capacity. The poor’s lack of economic capacity thus lies at the heart of the energy-poverty nexus.

Rigorous monitoring, detailed planning, prompt and decisive interventions, and efficient coordination by JBVNL played an instrumental role in achieving  universal electricity access in rural areas of the state. Successful implementation of Saubhagya by the state discom helped in achieving electrification of villages in saturation mode in all the districts of Jharkhand. As a result, complete electrification of households was declared in the state by December 31, 2018, well within the timeframe set by the central government.

While electrification in a difficult terrain such as that in Jharkhand has been challenging, maintaining the infrastructure and strengthening the same over time to ensure 24×7, reliable and quality power supply to all consumers is the next big challenge. The state government-sponsored Jharkhand Sampurna Bijli Achyadan Yojana is an ongoing scheme that undertakes both rural and urban strengthening of electrical networks. The journey of rural electrification will continue through such projects, which are necessary for providing stable and quality power supply to households.

The article has been authored by Jharkhand Bijli Vitran Nigam Limited