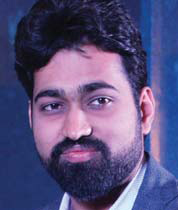 At Sai Computers Limited, Ayush Kumar has been involved in various kinds of projects, from plant production and planning to the development of an analytics portal and distribution franchisee systems. As chief executive officer (CEO), he is managing the company’s entire operations and resources.

Initially, the company provided IT consultancy for automated batch billing systems to UPSEB. It later entered into new ventures, including transformer manufacturing, geographical information system software, on-the-spot/handheld billing, AMR/CMRI based software with completed billing and data analysis. Currently, it manages the billing for discoms in Uttar Pradesh, Odisha, New Delhi, Jharkhand and Himachal Pradesh, and has a distribution franchise in Meghalaya.

Kumar believes that the power sector is on the cusp of change. There are some utilities on the cutting edge of technology while some are decades behind. But overall there has been tremendous improvement, he feels.  While financial recovery is still the biggest challenge facing the sector, he believes that the situation is changing very fast. “Privatisation, both through the licensee and franchise models will increase, while technological interventions and an increased focus on analytics will be game changers,” he believes.

On the company’s future roadmap, Kumar says that it is planning to automate most of its processes this year. The company is increasing its focus on the rural sector in order to improve the power situation in remote areas. To this end, it has already implemented solutions in its distribution franchisee project in Meghalaya. He takes pride in the company’s achievement as a distribution franchise in Dalu, Meghalaya, where it has reduced losses from 87 per cent to 26 per cent in just eight months, besides improving the supply situation. “It is really heartening to see when people living in the toughest conditions appreciate our effort, and say that their life has improved due to our efforts,” says Kumar.

Kumar holds a B.Tech degree from the National Institute of Technology, Rourkela. He is a fan of the Godfather movies and likes to read books on psychology, Predictably Irrational being a  favourite. He is proud of his family. His great grandfather and grandfather participated in the Indian freedom struggle. He likes to spend time with his family, which comprises his father, who started the company, mother and two sisters.