In order to track the progress of energy efficiency initiatives in India and highlight best practices, the Ministry of Power recently released the State Energy Efficiency Index 2019. The index has been developed by the Bureau of Energy Efficiency (BEE) in association with the Alliance for an Energy Efficient Economy. The report presents a state-wise analysis by examining policies and regulations, financing mechanisms, institutional capacity, of energy efficiency measures and the resultant energy savings in different sectors. The 2019 index ranked the states of Haryana, Kerala and Karnataka as top performers. A round-up of the key takeaways from the report…

Data for the report has been collected from state departments with the help of state-designated agencies (SDAs). For rational comparison, states/(UTs) were divided into four groups based on the total primary energy supply required for meeting their actual energy demand.

The scoring criteria and the evaluation process have also undergone change and have been made more stringent. Some of the new indicators introduced in the 2019 index are the adoption of the Energy Conservation Building Code [ECBC] 2017, energy efficiency measures in MSME clusters, the adoption of e-mobility, energy savings and institutional reforms, and the collaboration between SDAs and state departments.

Overall, the 2019 index assesses 36 states and UTs based on 97 indicators, including their efforts and achievements in policy and regulation, financing mechanisms, institutional capacity, the adoption of energy efficiency measures and energy savings achieved. It incorporates qualitative, quantitative and outcome-based indicators to assess energy efficiency outcomes in five distinct sectors – buildings, industry, municipalities, transport, and agriculture and discoms.

It categorises the states as frontrunners, achievers, contenders and aspirants based on thir efforts and achievements in the energy efficiency space. 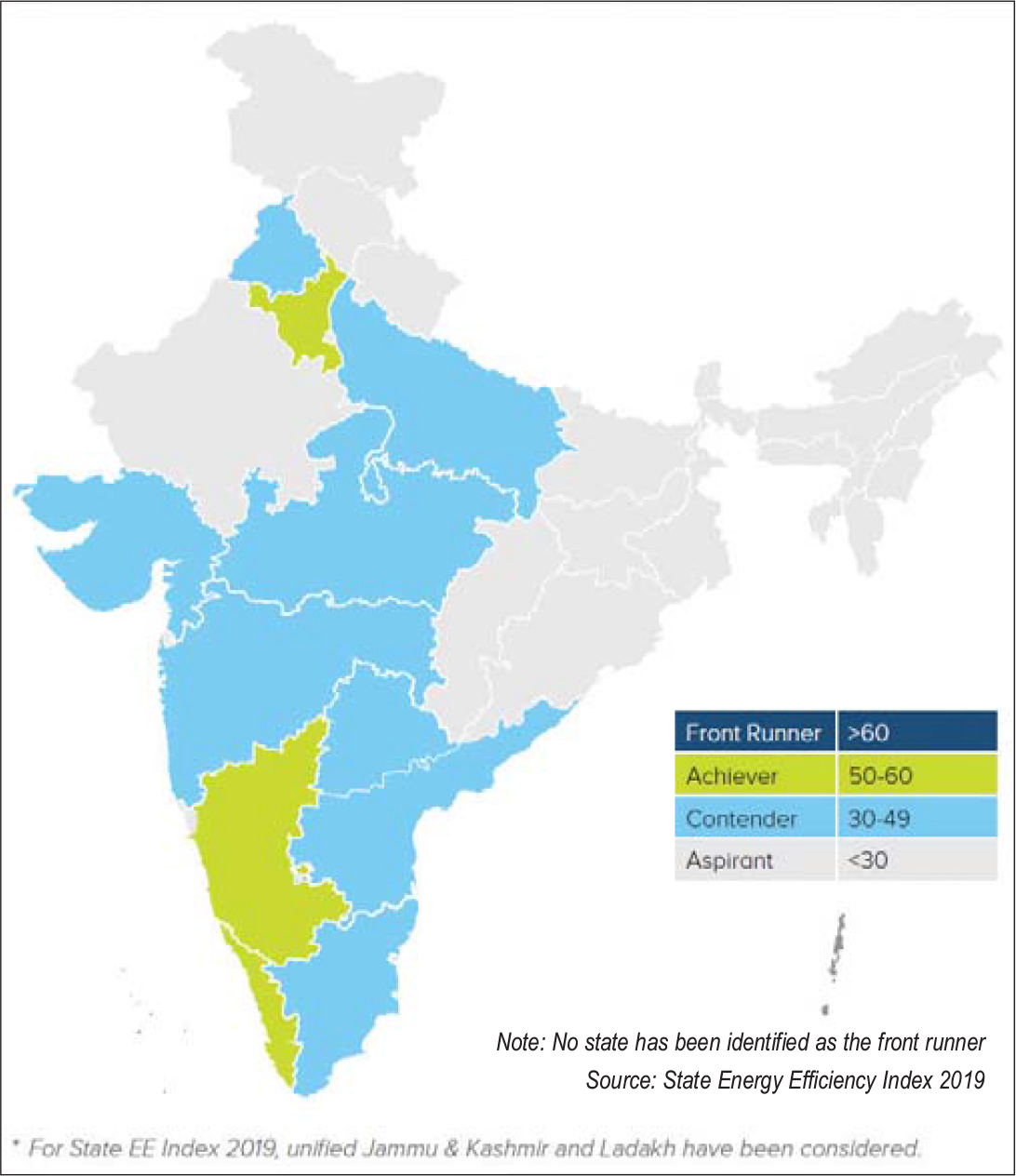 The top performing states in the achiever category are Haryana, Kerala and Karnataka. However, none of the states have been identified as frontrunners, implying that a lot more remains to be done at the state level in the area of energy efficiency. Some of the key sector-wise findings from the report are:

Buildings: The index has 23 indicators to assess the states’ initiatives and progress in energy efficiency measures in the building sector, which accounts for 33 per cent of the total electricity consumption in the country. The overall score for most states is lower in this index compared to the preparedness index of 2018, primarily due to the increase in allocated score and stringency in scoring criteria for outcome-based indicators. The top performing states in the building sector have been identified as Haryana, Kerala, Telangana and Karnataka. Regarding the ECBC 2017, six states have amended the code to suit regional and local conditions while four have incorporated ECBC 2017 in municipal building by-laws. In a separate development, nine states have started making progress in the adoption of the ECO Niwas Samhita 2018 – the energy conservation building code for residential buildings.

Industry: The index has 17 indicators for rating energy efficiency measures in the industrial sector. New indicators introduced this year include energy efficiency in MSME clusters, the adoption of ISO 50001 and the performance of the states under Perform, Achieve and Trade (PAT) Cycle II. In this sector, 35 units across 13 states reduced their energy intensity through energy efficiency measures. For PAT Cycle II, based on provisional data for designated consumers (DCs), more than 80 per cent DCs have achieved the SEC target in nine states. However, despite several national programmes, the focus on energy efficiency is still very low in the MSME segment. The top performers are Kerala, Haryana, Karnataka and Tamil Nadu.

Transport: The transport sector was assessed on the basis of 13 indicators this year as compared to five in the previous year. The indicators are related to initiatives in electric mobility, energy efficiency of state road transport corporations (SRTCs) and overall energy efficiency in the sector. Six states have released electric vehicle (EV) or e-mobility policies, while four have published draft EV policies. A few states have started incorporating EVs in public transportation. The top performing states in the transport sector are Tamil Nadu, Uttar Pradesh, Kerala, Andhra Pradesh, Maharashtra and Karnataka. These states have performed well in initiatives on electric mobility and energy efficiency in the SRTC and government business.

Agriculture and discoms: The agriculture and discom sector comprised 19 indicators related to demand side management (DSM) regulations, utility-driven agriculture and non-agriculture DSM programmes, savings through DSM programmes, and transmission and distribution losses in the state. New indicators include a policy for integrated cold chain infrastructure in the state, a policy for integrated water and energy savings in the agricultural sector in the state and the implementation of time-of-day (ToD) tariffs for different customer categories on the policy and regulation side. Against the total score of 15 for this category, the maximum score of 9.5 was achieved by Haryana and Punjab. The other top performing states are Karnataka and Delhi. Key developments in the sector include the implementation of ToD tariffs for industrial and/or commercial consumers by 24 states, and for residential consumers by five states. Seven states have reportedly taken initiatives for the promotion of innovation and R&D in energy efficiency. 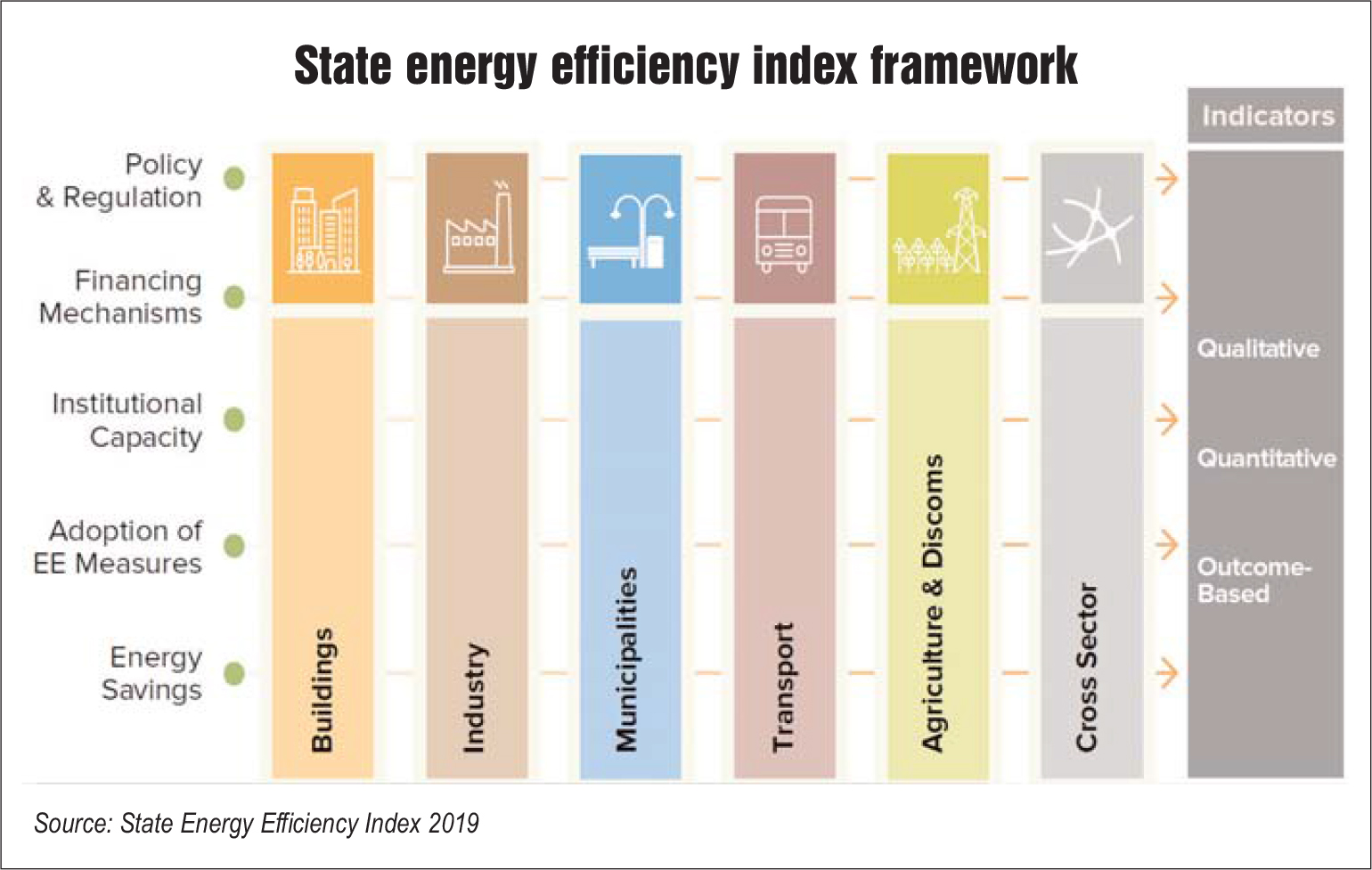 The 2019 index reveals that the majority of state initiatives are related to policies and regulations. Also, most of the first-generation energy efficiency policies prepared by the BEE under programmes on standards and labelling, ECBC, PAT scheme, etc. have been adopted by states. However, the report notes that the states should now focus on ensuring complete compliance to realise actual savings.

Thus, a three-point agenda has been suggested for consideration by state agencies. First, the states should take a proactive role in policy formulation and implementation, exercise powers under the Energy Conservation Act, and start formulating and implementing supporting policies.

Second, the mechanism for data collection and management also needs to be strengthened. SDAs should significantly enhance their engagement with state departments, discoms and private sector organisations beyond one-time data collection as this would enable effective implementation of energy efficiency programmes, help SDAs to measure and monitor progress, and, most importantly, provide a feedback mechanism for modifications in energy efficiency programmes and policies, and assist in the setting of realistic targets.

Last but not least, the states must enhance the credibility of their energy efficiency schemes by undertaking enforcement and compliance checks. Rules related to mandatory energy audits, and the mandatory sale and purchase of BEE star labelled appliances alone would not be effective unless an inspection process is introduced and strengthened. Moreover, the states should undertake independent monitoring and verification of savings, which is integral to all its energy efficiency policies and programmes.