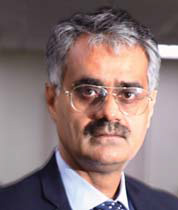 With over three decades in the energy sector, Arun Sharma has successfully spearheaded the implementation of turnkey projects. He began his career as a scientific officer with the Department of Atomic Energy. In the past, he has worked with Punj Lloyd as its chief operating officer (COO), the Nuclear Power Corporation of India, Enron and KazStroy Service.

Currently serving as the COO of Sterlite Power’s infrastructure business, Sharma’s role entails efficient and timely completion of the company’s tariff-based competitive bidding projects. “This role gives me an opportunity to address the toughest challenges of energy delivery, in terms of time, space and capital,” he says.

On the current state of the power sector, Sharma says, “As we move away from a power generation deficit to a surplus, the focus is shifting to the adoption of cleaner fuels. Renewables are transforming this sector, and bringing up fresh challenges of grid upgrade and expansion”. According to him, the biggest challenge is to guarantee that transmission systems are in place before renewable energy projects are ready. He also highlights the need for capital in the sector, with India alone needing $60 billion-$80 billion in the next five years.

“Today, the need of the hour is to have a well-integrated planning between central and state transmission utilities, undertake new infrastructure planning and ensure effective utilisation of the existing transmission infrastructure,” remarks Sharma. He adds that Sterlite Power has been a pioneer in the use of high-performance conductors, power system mapping, drones stringing and live line reconductoring. It has delivered the first-of-its-kind  upgrade project in Kerala. His most memorable assignment has been the uprate project of UPPTCL. The Lucknow project saw 100 circuit km of line length being completed in 78 days.

Sharma believes that people are the most strategic asset in any organisation. Hence, his success mantra has been to take care of his team members while they take care of the business. He de-stresses by jogging in the morning and practising yoga. He is passionate about travelling, St. Petersburg being his favorite destination. His travel wish list includes going to the northernmost and the southernmost cities on this planet. He also wants to pen down his experiences in the energy sector and share insights.

Sharma is a graduate from NIT Rourkela and a post-graduate in management from MDI Gurugram.