Renovation and modernisation (R&M) of hydroelectric plants (HEPs) gives a new lease of life to operating units by modifying and equipping them with the latest technologies, components and systems with a view to improve their performance in terms of efficiency, output and reliability. Although the extent of R&M varies from plant to plant, such upgradation makes them ready for regular operation for another 25-30 years before another R&M is considered.

Therefore, the R&M of hydro plants is a cost-effective way to extend generation from the plant with improved reliability and availability that yield benefits in about three to four years as against seven to eight years required for the construction of a new hydro plant. Also, the estimated cost per MW against R&M for life extension is much less than the new hydro projects of similar capacity. Moreover, R&M requires fewer clearances, and does not entail the challenges of statutory and land clearances, rehabilitation and resettlement issues involved in setting up new projects.

Under the Central Electricity Authority’s (CEA) R&M programme, during the Twelfth Plan period of 2012-17, around 21 projects (two central and 19 state) aggregating 4,149 MW have been taken up for R&M, yielding a cumulative benefit of 549 MW.

Overall, R&M works at 104 hydropower projects with an aggregate installed capacity of 20,611 MW had been completed till the end of the Twelfth Plan period (in 2016-17) and a total benefit of 3,636 MW through life extension, uprating and restoration has been accrued. Of these, 21 plants belong to the central and the remaining 83 to the state sector.

During 2017-22, 46 schemes (eight in the central sector and 38 in the state sector) with a combined capacity of 9,197 MW are expected to be completed. The total expenditure on these projects is expected to be at Rs 58.22 billion for an estimated benefit of 4,527 MW. As of September 2019, of the total, 28 projects were at the implementation stage, 11 were at the tendering stage and four stood completed and detailed project reports (DPRs) were under preparation for another three projects.

Of the schemes that have been completed during 2017-22, three schemes – Ganguwal and Kotla (in Himachal Pradesh), Dehar Power House Unit 6 (in Himachal Pradesh), and Salal HEP (in Jammu & Kashmir) – belong to the central sector and one scheme, Sholayar I (in Tamil Nadu), belongs to the state sector, with an aggregate installed capacity of about 858.4 MW. These four schemes have achieved a benefit of 132.4 MW through life extension and uprating.

For the period 2022-27, a total of 33 projects (four central and 29 state) aggregating 4,358 MW have been programmed for R&M works. The benefits from the R&M works are expected to be nearly 3,428 MW. Of these, two projects – Pong Power House in Himachal Pradesh and Gandhi Sagar in Madhya Pradesh – are under implementation. 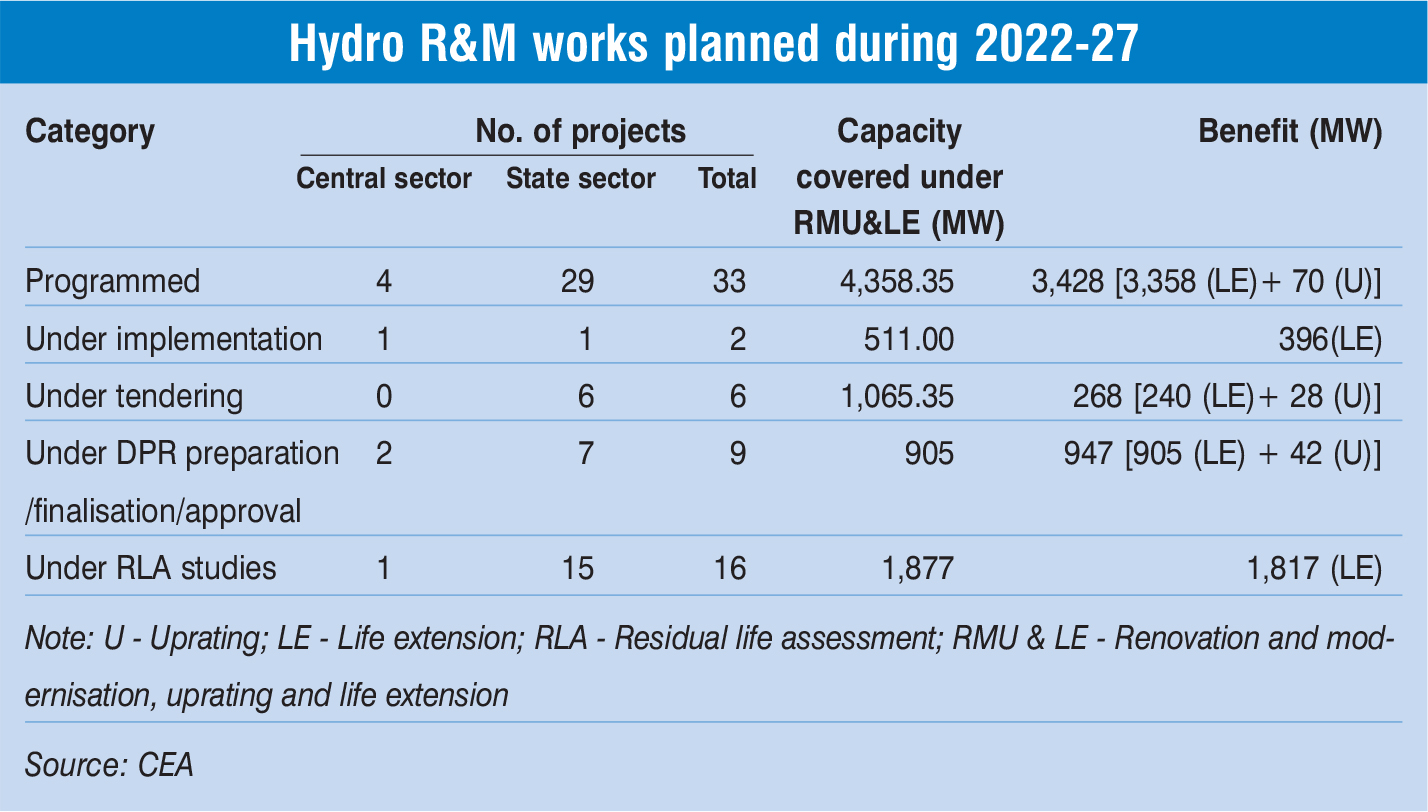 The lack of proper policies or guidelines is a key challenge to the implementation of R&M works, as a result of which utilities often do not carry out these activities. Therefore, the planning of DPRs is not given due importance by utilities, which results in difficulties during the bid stage and in delays in R&M works. In addition, the lack of experienced contractors and consultancy firms hinders the implementation of such works. More often than not, utilities want to undertake piecemeal interventions rather than comprehensive R&M work. Therefore, various measures are needed to address these issues.

The rehabilitation of a hydropower plant is usually performed towards the end of its useful life, that is, after 30-35 years. However, as per industry observers, given that hydro plants are subjected to silt erosion (especially in the Himalayan region), which then results in forced outages, R&M works need to be taken up much earlier than 35 years. Another difficulty in carrying out R&M at HEPs is the lack of experienced contractors and consulting firms. As a result, the contract for R&M work is often awarded to incompetent agencies, resulting in a significant delay in project completion and poor quality work. Also, adequate financial resources are required for the successful implementation of R&M projects. The utilities need to be provided with timely budgetary allocations to enable them to firm up the financial requirement in the DPR.

Overall, R&M requires technical, commercial and regulatory support. The technical aspects of hydro plant R&M include an in-depth study of the residual life assessment, finalisation of the scope and a detailed report on the specific parts that need attention and refurbishment, in order to enhance the productivity of the plant. Proper financial support, timely tie-ups with the concerned agencies, approvals and clearances from the concerned authorities are imperative. A good DPR is a prerequisite for the proper implementation of the programme. In addition, close monitoring of erection and commissioning is required. Also, generating unit shutdowns need to be planned and coordinated for early and timely completion of the work. The R&M work of hydro plants has remained stagnant in the past, but now, owing to large-scale renewable energy capacity addition, there is a renewed interest in hydropower on account of its flexibility in operation.