Over the years, the power distribution segment has seen multiple government interventions aimed at improving its health. The most recent of these was the Ujwal Discom Assurance Yojana (UDAY) launched in 2015. However, contrary to expectations, the scheme has not quite succeeded in totality.

While there was some improvement in AT&C losses at the national level from 20.2 per cent in 2016-17 to 18.15 per cent in 2018-19, at least 12 states reported AT&C losses of more than the national average in 2018-19. The states continued to report staggering book losses, which stood at Rs 269.5 billion (at an aggregate level) in 2018-19. The outstanding dues of discoms payable to generators/creditors stood at Rs 733 billion as of December 2019, an increase of 64 per cent over the previous year. Meanwhile, regulatory assets at the national level are worth more than Rs 1,500 billion, reflecting systemic inefficiencies.

Now, a new reform-linked scheme could be on the horizon, as indicated in media reports. The scheme, which was tentatively named ADITYA (Atal Distribution System Improvement Yojana), will have components to incentivise reforms by states. According to the Ministry of Power (MoP), the government has so far been focusing on the creation of assets for improving energy access, and on the strengthening and augmentation of sub-transmission and distribution networks under schemes such as Saubhagya, DDUGJY and IPDS. Hence, the next natural step is institutional reform. The scheme, which is in the design stage, will focus on reducing AT&C losses and making discoms financially sustainable. 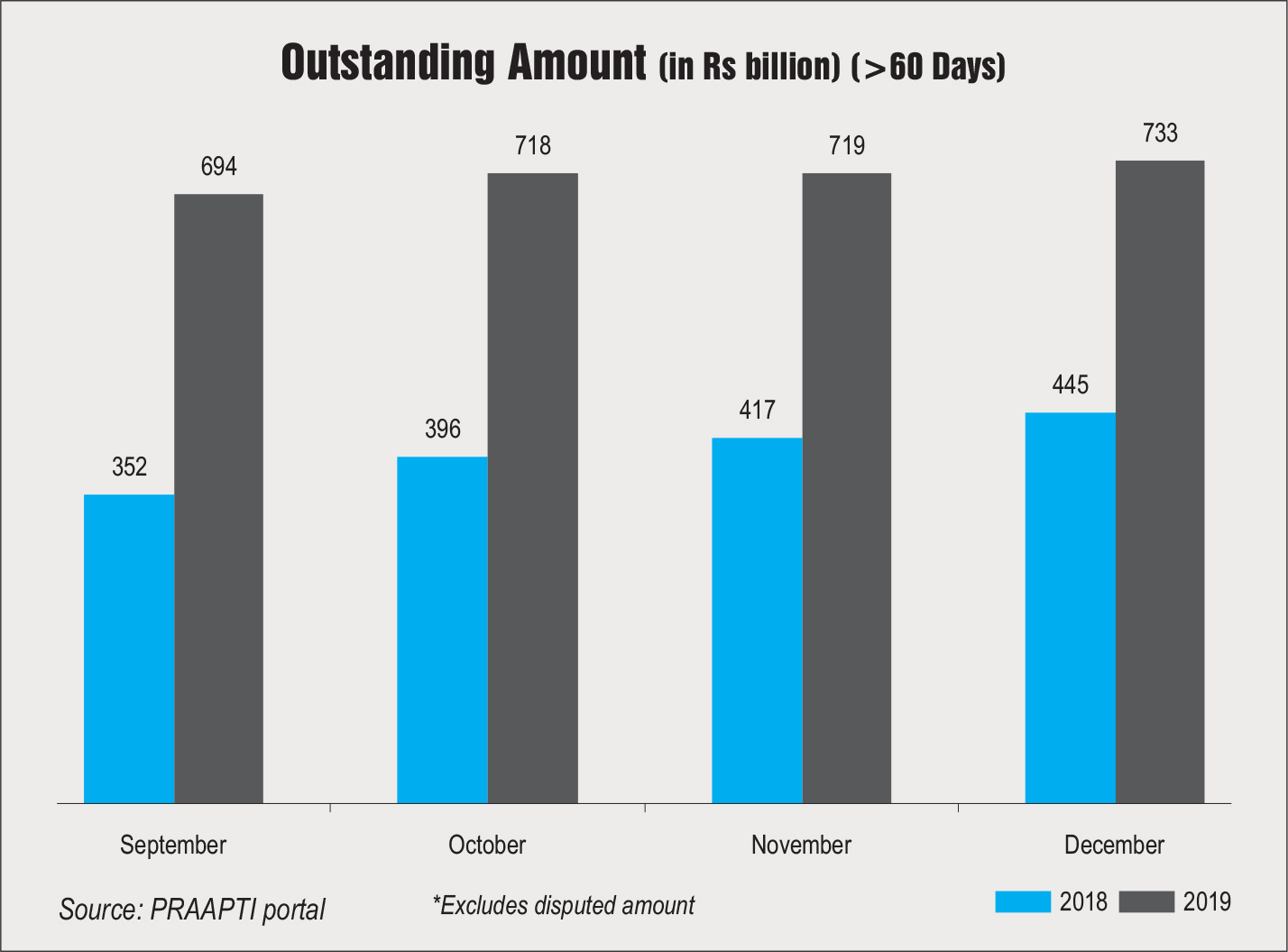 Under the first phase, the government has proposed infrastructure upgradation, including the implementation of smart meters worth Rs 2,300 billion, of which 15 per cent would be provided by the central government and 10 per cent by the state government.

Under the second phase, the inefficient discoms are likely to undergo institutional reforms to be able to take advantage of the investment support. The scheme envisages lowering the AT&C losses of discoms to 12 per cent and reducing the gap between costs and revenue. As per the UDAY portal, as of February 2020, the AT&C losses stood at 19.76 per cent and the revenue gap at Re 0.34 per unit. The third phase of the scheme would focus on training and capacity building.

The scheme also lays emphasis on introducing private participation. States with more than 18 per cent AT&C losses can opt for an infrastructure support reform package, which entails choosing between running discoms in the public-private partnership model, outsourcing distribution to multiple supply and network franchisees and working through input-based distribution franchisees.

The two must-haves to ensure that the new scheme does not become another paper exercise are implementation of the National Tariff Policy (NTP) amendments and private sector participation.

Recently, an interministerial group led by the home minister has been formed to look into the proposals for NTP amendments. These include provisions for the imposition of penalties on discoms for power cuts, timely revisions in tariffs, not allowing discoms to pass-through AT&C losses in consumer tariffs beyond 15 per cent, disbursement of subsidies through direct benefit transfers, and limiting cross-subsidies for industries to 20 per cent.

On the privatisation front, the MoP has drafted a model plan for states to have multiple private franchisees as power suppliers, opening up the distribution sector in India. A concept note on multiple supply franchise (MSF) is expected to be shared with the states for feedback. To improve the network management function, network franchisees would be introduced. The MSF is expected to benefit from the arbitrage opportunity between the cost of regulated power determined by the regulators and that of efficient power procurement, as well as from value-added services. The ownership of meters in this model will be with the network franchisee (NF), which will enable consumer switching. The NF will be a regulated entity that will receive payments from the MSF. Even though MSF and NF are franchisee arrangements that are covered under contract laws, and discoms would not be required to manage the network and retail functions, coordination among the franchisees and oversight would continue to be the discoms’ responsibility.

“Private sector participation through licensing or franchising on the whole, after netting off successes and failures, does show a net positive impact, largely based on the Delhi-Bhiwandi experience. In part, nudged by this net positive impact, policymakers are toying with the idea of reviving the separation of carriage and content, long discussed but never implemented, to facilitate the entry of private players into distribution via the competitive-retail model, while retaining the wires/carriage business for licensees. But there is one elephant in the room despite improving operations and reducing losses, certain discoms continue to grapple with financial stress and a cash crisis. Unless the root cause of this misery, which is much deeper than AT&C losses, is addressed, a simplistic separation of carriage and content and/or private sector participation through the licence/franchise route will not salvage the situation,” comments Shalabh Srivastava, country director, RTI International India. 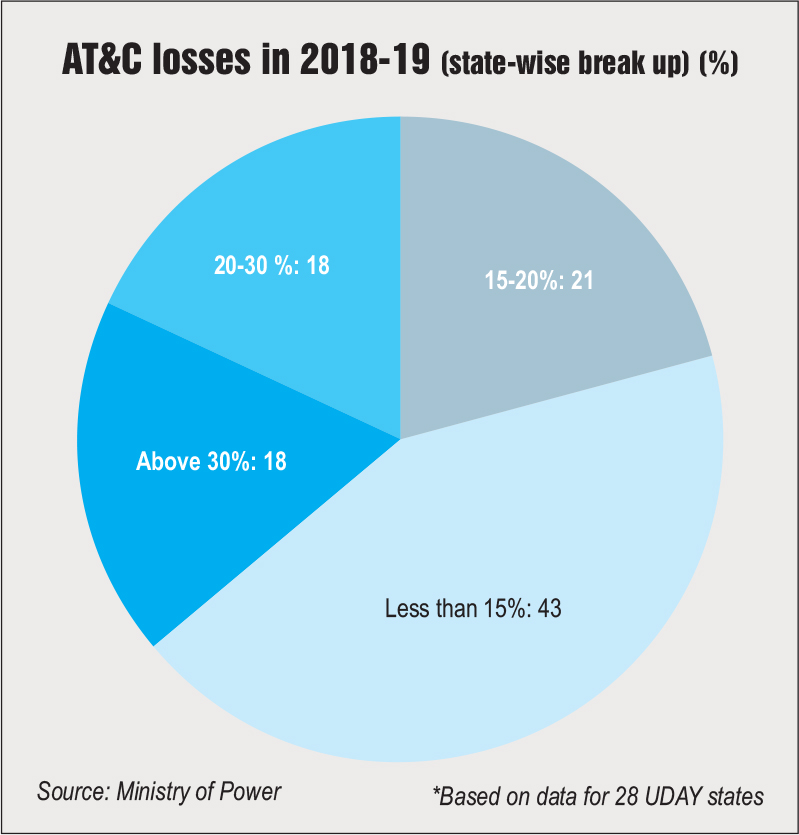 Smart metering is also set to receive a big push under the scheme. It is expected to improve the financial sustainability of discoms. In Budget 2020-21, the finance minister has urged states to shift to prepaid smart meters in the next three years. As per the draft vision document of the power sector, the trajectory for smart meter deployment is 2 per cent by 2019-20, 30 per cent by 2020-21, 60 per cent by 2021-22 and 100 per cent by 2022-23. For expediting the roll-out of smart meters, advisories have been issued to all states to convert all existing meters into prepaid smart meters in the next three years. The government is looking at operation of contracts in totex mode to bring in efficient management and control over the AMI throughout the project lifecycle. These plans, however, seem ambitious given that the national progress on smart metering is only 6.4 per cent, that is, about 1.5 million smart meters are installed as against 241 million consumers across the country.

Further, for bringing down the cost of power purchase, which stood at Rs 4.42 per unit in financial year 2019, a group has been constituted under the chairmanship of special secretary MoP to look into the options for the implementation of merit order dispatch across the country. The merit order dispatch model is aimed to be replicated at the national level, including by intra-state generators, to get the maximum efficiency. The model is being implemented in the form of Security Constrained Economic Dispatch, effective till March 2020, and has generated substantial savings of approximately Rs 30 million per day.

A scheme for clearing the legacy dues of discoms is also being worked out. The letter of credit mechanism, which was introduced in August 2019, has helped instil financial discipline. However, it has not helped clear the huge backlog of dues up to July 2019. To address this issue, the Power Finance Corporation will set up an alternate investment fund to assist discoms in repaying dues of over Rs 835 billion to thermal power plants while the Indian Renewable Energy Development Agency will set up a similar fund to help clear its dues to renewable plants, stated the power minister post the budget announcement.

Apart from these measures, discom productivity needs to be improved. “One way out in the near term is to re-imagine the way discom staff are currently employed and engaged, and completely change their terms of engagement to make it linked to performance in compact geographic areas, armed with a high degree of autonomy and delegation, uninterrupted tenure, high rewards and resources for mentoring and strategising. A peculiar example is Kanpur city in Uttar Pradesh, where KESCO demonstrated a sharp reduction in AT&C losses when threatened with privatisation, and the momentum continued even when that threat subsided,” notes Srivastava.

Clearly, the task of reforming discoms is huge and policy changes can create the right conditions for the segment’s resurgence. As Srivastava puts it, “Regarding larger sectoral reforms, policy refresh is needed on multiple fronts – REEVES (renewable energy, electric vehicles, energy storage), separation of carriage and content, separation of storage and content, as well as power market/trade reforms. For a subject as federal as the power sector, no one silver bullet can solve the problem.”