The renovation and modernisation (R&M) and life extension (LE) programme has been critical to thermal power plant (TPP) operations since its launch in 1984. While its initial objective was to economically increase generation to meet the power demand-supply gap, the programme is now aimed at introducing flexibilisation and reducing emissions from thermal units.

With the rapid influx of infirm renewable energy, the existing TPPs need to ramp up and down quickly, and provide frequency control to balance the power grid. Also, with the growing environmental consciousness and the country’s aim to reduce greenhouse gas emissions, it is imperative to retrofit TPPs with emission control equipment such as flue gas desulphurisation (FGD) systems, electrostatic precipitators (ESPs) and low NOx burners. In her latest budget speech, the finance minister has advised old polluting thermal units to shut operations. Clearly, the writing is on the wall for TPPs – they must either perform well on the economic, environmental and flexibility fronts, or perish, since generation capacity addition is no longer the need of the hour. The declining plant load factor of TPPs, from 73.65 per cent in 2011-12 to 55.77 per cent in April-December 2019, is an indicator of their diminishing demand.

In this context, R&M has assumed importance, equipping TPPs with the right technologies to support the ongoing energy transition.

The R&M/LE programme was launched by the Central Electricity Authority (CEA) over 35 years ago. R&M is perceived as a cost-effective option for additional generation from existing TPPs vis-à-vis greenfield TPPs. R&M can be carried out at a lower cost and in less time as compared to setting up new power projects. Further, benefits such as life extension, better safety and higher efficiency are realised through R&M.

So far, R&M has been largely carried out for units with 100-210 MW ratings that are producing power much below their rated capacity. R&M has helped these units achieve better performance by equipping them with advanced technology. The related LE programme focuses on plant operation beyond its original design life. As part of LE, residual life assessment (RLA) studies of critical plant components are carried out with the aim to increase their life beyond the design economic life of 25 years.

In December 2019, the CEA released draft guidelines for R&M/LE works of coal/lignite-based power plants. As per the draft guidelines, R&M cannot be limited to performance improvement, given the new environmental norms and increase in renewable penetration. Thus, there is a need for an all-inclusive approach for R&M of TPPs.

As for meeting the new environmental norms notified by the Ministry of Environment, Forest and Climate Change in December 2015, almost 166.5 GW of thermal capacity will need retrofits such as FGD installations. So far, the progress on compliance with the revised emission norms has been sluggish. The industry has repeatedly sought extensions to install emission control equipment and the power ministry is reportedly in talks with the environment ministry for such extension. As of January 2020, FGD systems have been commissioned only for 1,320 MW of capacity, representing 0.8 per cent of the targeted capacity. 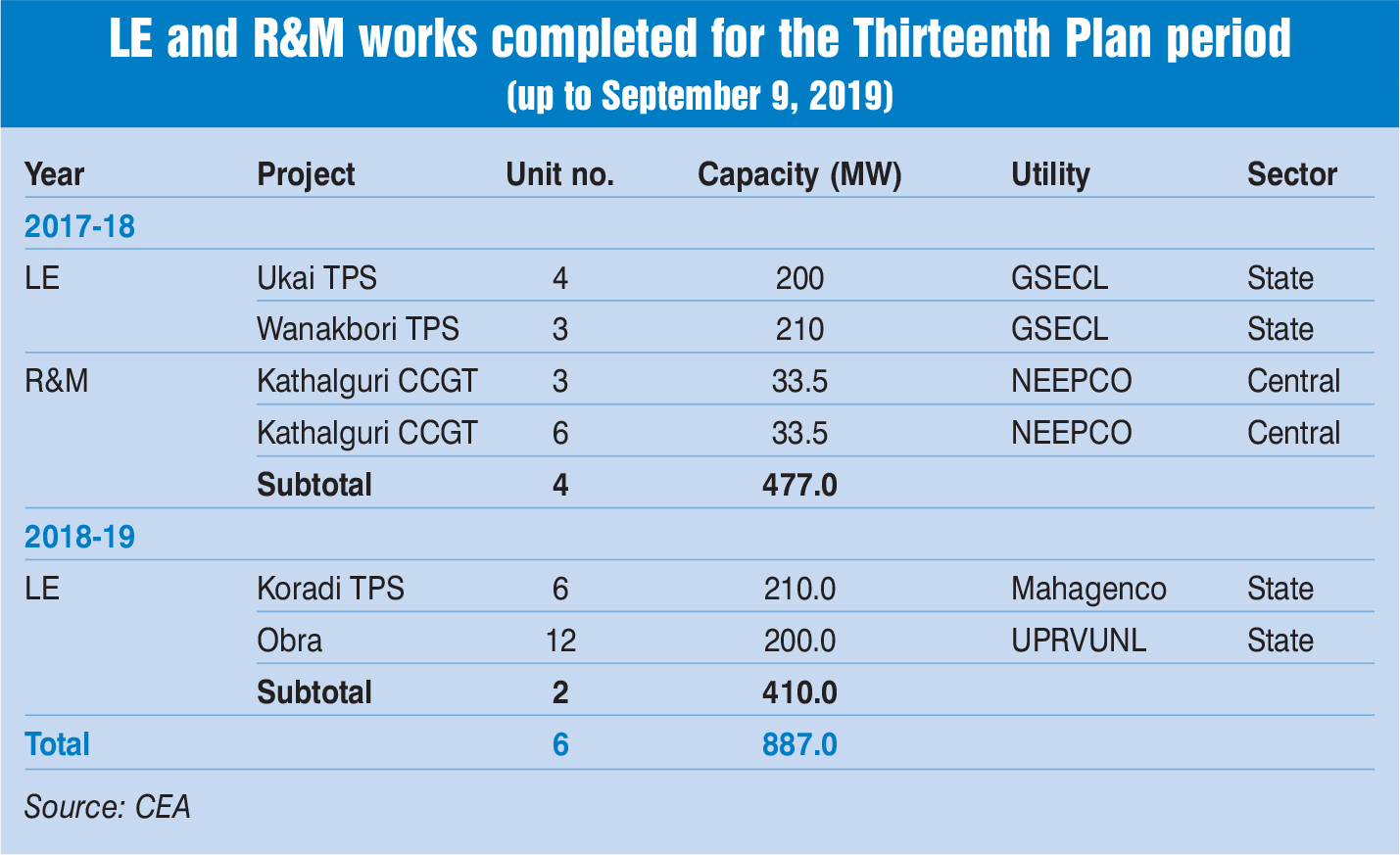 Various pilot R&M projects are undertaken in association with international agencies such as the World Bank and JCOAL. For instance, JCOAL has conducted a feasibility study for the replacement of thermal units at NTPC’s Badarpur TPS with new units based on supercritical/ultra supercritical technologies. The residual life assessment of NTPC’s Dadri TPS Unit-3 (210 MW) and the feasibility study of NTPC’s Singrauli Stage I and Stage II TPS have also been carried out by JCOAL. Further, it has completed the flexibilisation study for Units 4 and 5 of UPRVUNL’s 500 MW Anpara-B TPP.

Meanwhile, the World Bank has financed the Coal-Fired Generation Rehabilitation Project for India, which focuses on energy efficiency-based R&M. The project has helped restore 640 MW of capacity across West Bengal, Haryana and Maharashtra.

While R&M and LE works offer immense benefits, TPP operators have not been able to realise their full potential owing to challenges such as paucity of experienced firms and contractors for undertaking RLA studies and performing R&M works. The participation in R&M is also hampered by highly skewed risk-benefit sharing in the contractual agreement, lack of clearly defined scope of work, etc. In order to promote the R&M market, it is essential to award R&M projects through fair, transparent and competitive mechanisms, and develop public-private partnership models for the purpose. The recently released CEA guidelines address some of these concerns.

However, technical surprises in a plant often lead to scope creep, cost escalation, delays in the completion of work, quality deviation and contractual disputes. To avoid this, it is important to ensure data monitoring, robust reporting and maintenance, and adequate assessment. The R&M/LE contract should be awarded as soon as technical studies (RLA, detailed project report preparation, etc.) are completed so that R&M work can begin expeditiously. Further, difficulty in controlling the scope of project, and tight timelines and budgets cause delays in the completion of R&M works.

Going forward, there is a need to formulate effective implementation strategies for R&M/LE based on realistic time schedules, identify technologies to be implemented, and encourage participation from various executing agencies.