The outlook for electric mobility in India has been becoming increasingly optimistic in recent years. Greater adoption of electric vehicles (EVs) and the creation of supporting infrastructure come with their own set of challenges. To begin with, the nature of electricity demand from these charging stations is unpredictable. This is mainly due to uncertainty in the charging requirements of consumers who would charge their vehicles at different locations and for varying periods. This would impact the grid, both in terms of power quality and increased stress on the power distribution network. Close involvement of the discoms during the planning stage before large-scale adoption of EVs is essential for streamlining power supply for charging. This will enable the grid to be more robust to take on the additional demand arising from the mass adoption of EVs.

EV loads on power grids tend to be non-linear in nature and can cause harmonic distortion, direct current offset, phase imbalance and voltage deviations in the distribution network.

Voltage imbalance in the low voltage distribution network is among the main power quality issues caused by EVs. With the expected increase in EV numbers, the main connection points and the penetration level remain undetermined; this aspect would result in voltage imbalance in three-phase systems while currently, single-phase EV chargers are available in residential networks.

Both when charging and disconnecting EVs, power losses are expected to occur in the vehicle and building systems supplying power to the vehicle. Predominant losses occur in power electronic devices used for AC-DC conversion in the vehicle. The large-scale connection of plug-in hybrid EVs will cause uncertainty in power system operations. The penetration of EVs generates harmonics, which would disrupt grid strategies, decrease the voltage and increase power losses.

The risk of overloading transformers is particularly high during peak hours. Imagine what would happen when all EV owners in the neighbourhood decide to recharge their vehicles at the same time, early evening, after returning from work, which is more or less the same time that households turn on their cooking, cooling and other appliances. Power electronic appliances increase the harmonics as the load increases, followed by an increase in transformer temperature. This phenomenon would lead to wear and tear on the transformer bushings because of the flattened load efforts. Also, EV penetration is likely to enhance transformer load and decrease voltage beyond the acceptable limit.

It is expected that the impact of EVs on the base energy demand would be low to medium, as the additional energy requirement is quite small when compared to the total electricity demand of the country. But the major problem likely to be faced by discoms would be when the private four-wheeler EV market picks up, as private consumers are not obligated to inform discoms about their vehicle charging plans.

Further, greater EV penetration, peak load demand at night and during the afternoon will be impacted in the residential and commercial segments as most consumers will charge their EVs at home or the workplace depending on commercial viability. This will require constant network upgradation to cater to the peak load demand.

Most of the discoms in India are currently dealing with heavy financial losses, due to subsidies given to the agricultural sector and high aggregate technical and commercial losses. In addition, the fixed charges or capex investments paid by discoms to generators can be capitalised by offering EV owners tariff structures like time-of-day tariff, real-time pricing and night charging. If smart chargers are used, EV charging can be time-shifted to match renewable generation, and this can help in cost-effective renewable integration.

Therefore, discoms need to build resilience through network expansion to cope with fast EV charging, especially during peak hours. Also, smart chargers can enable cost-effective renewable energy integration by shifting charging load to a different time of the day and taking care of the ramping-up requirements of renewables. Further, fast charging can be managed through a well-designed demand response mechanism.

Discoms could deploy alternative solutions such as storage units at the distribution transformer level to charge and discharge during off-peak and peak hours respectively. However, this would require an improvement in the cost economics of energy storage. Other options include public chargers near commercial establishments and depot chargers for public transport such as electric buses.

Once EVs are capable of supporting bidirectional charging (grid to vehicle and vehicle to grid), utilities could encourage EV owners to charge from intermittent sources such as solar and wind in times of low demand, and then use the energy stored in the vehicle battery to meet the electricity demand of their houses or sell it back to the grid during periods of peak load. 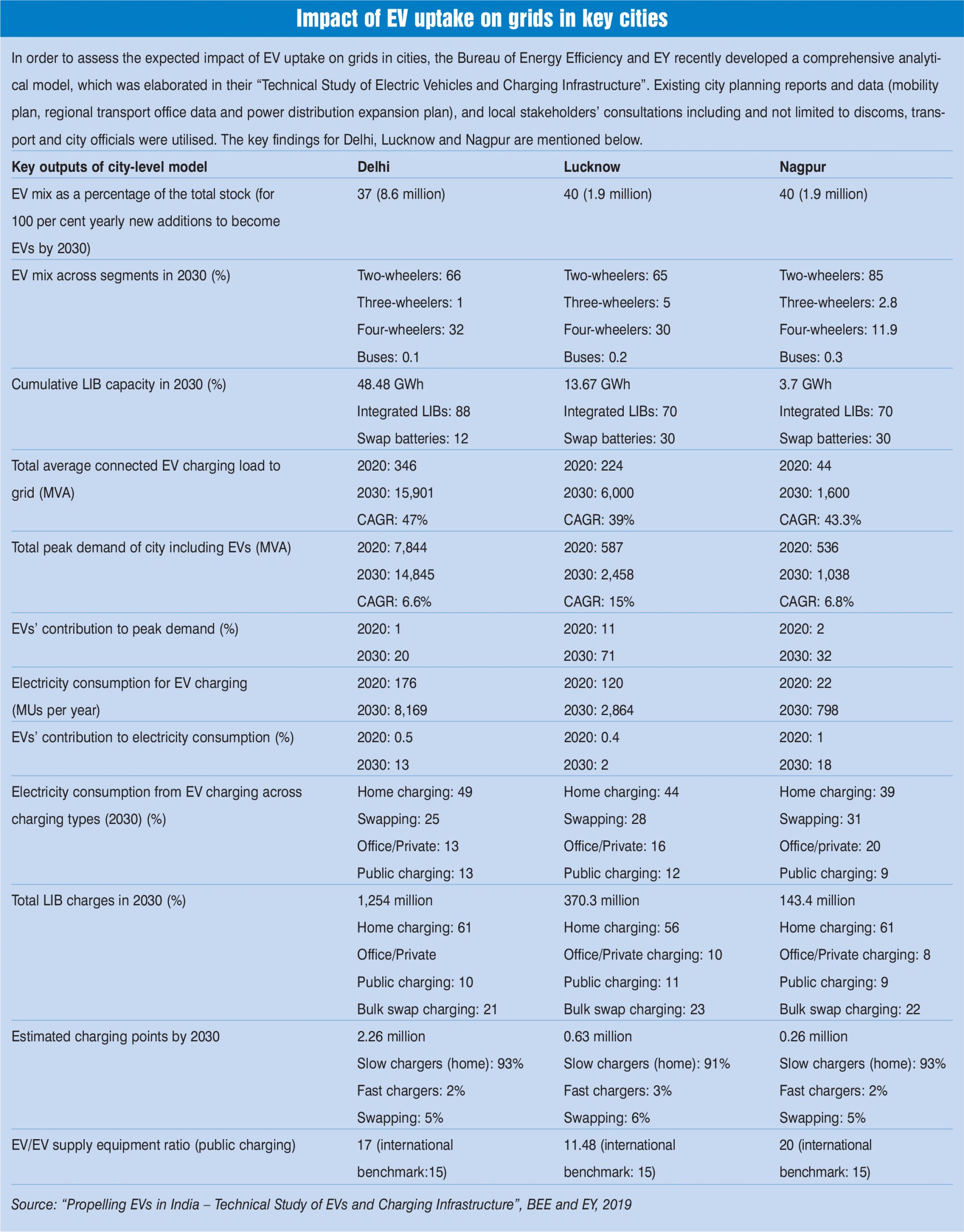 On the technology front, vehicle-grid integration technologies are emerging gradually and once these are commercially viable, they could further help in balancing the grid. However, the widespread use of EVs will significantly impact the power grid, mainly in terms of peak load management and power quality.

Large EV deployments will lead to potential power quality problems for the existing power networks, harmonics being particularly prominent. EVs may have an adverse effect on the distribution network if the penetration is not carefully and systematically planned due to its non-linear nature.

Also, as a large part of the incremental demand is likely to come during the evening or at night when renewable energy availability is limited, this could increase the offtake of thermal power, which may result in an increase in the carbon footprint. Designing appropriate pricing mechanisms would be critical for grid stability and to ensure that a higher EV fleet does not actually expand the carbon footprint.