In view of the large renewable energy capacity addition programme planned for the next few years, pumped storage plants (PSPs) are expected to play a vital role in providing balancing power. This will help address the variability and uncertainty issues associated with renewable energy sources. While in India, 11 PSPs with 4.8 GW of capacity have been successfully constructed, only seven plants of around 2.6 GW of capacity are operational.

THDC India Limited, an old player in the hydropower generation segment, is actively working towards tapping this source of power. The public sector enterprise is currently executing one of the largest PSPs in India, the Tehri PSP, which will add a capacity of 1,000 MW peaking power to the northern region upon completion by June 2022. The PSP is a part of the company’s flagship 2,400 MW Tehri Hydro Power complex. The operation of the Tehri PSP is based on the concept of water recycling between the upper reservoir and the lower reservoir. Overall, the PSU, which currently has 1.5 GW of operational capacity, is aiming to add another 3 GW of capacity by 2024-25, which will include not just hydro, but thermal and renewable energy projects as well.

THDC’s existing capacity of 1,513 MW comprises two operational hydropower projects (HPPs) and two wind projects. During 2018-19, the cumulative generation of THDC from all operational projects stood at 4,687.18 MUs, 3.22 per cent higher than the 4,540.94 MUs recorded in the previous fiscal.

The operational HPPs are the Tehri HPP (1,000 MW) and the Koteshwar HEP (400 MW), which are part of the 2,400 MW Tehri Hydro Power Complex. Apart from this, the Tehri PSP of 1,000 MW capacity is under construction. The 1,000 MW Tehri HPP, a multipurpose project providing electricity to the northern region, was commissioned in 2006-07, while the 400 MW Koteshwar HEP, downstream of Tehri, was commissioned in 2011-12. A plant availability factor of 84.52 per cent was achieved by the Tehri HPP and and 68.02 per cent by the Koteshwar HEP, against the normative figures of 77 per cent and 67 per cent, respectively, fixed for these projects by the Central Electricity Regulatory Commission for the year 2018-19.

The company’s wind energy portfolio comprises a 50 MW wind power plant at Patan, Gujarat, commissioned in June 2016, and a 63 MW wind power plant at DevbhumiDwarka, Gujarat, set up in March 2017. The capacity utilisation factor for these plants stood at 24.73 per cent and 33.25 per cent respectively, in 2018-19. Besides, a 24 MW Dhukwan small-hydro project on Betwa river in Uttar Pradesh has been commissioned recently in December 2019, although the commercial operation date is yet to be approved. The annual energy generation of the project is expected to be 97.82 MUs at 46.53 per cent plant load factor.

As of November 2019, the equity of the company was shared between the central government and the Uttar Pradesh government in the ratio of 75:25. In November 2019, the Cabinet Committee on Economic Affairs gave its approval to a proposal by the Ministry of Finance for initiating the process of strategic disinvestment in PSUs in 2019-20. The government’s stake in THDC was acquired by NTPC Limited. As a result, NTPC acquired a 74.5 per cent stake in THDC India, while the remaining 25.5 per cent stake is still held by the Uttar Pradesh government. The Competition Commission of India approved the acquisition in February 2020. 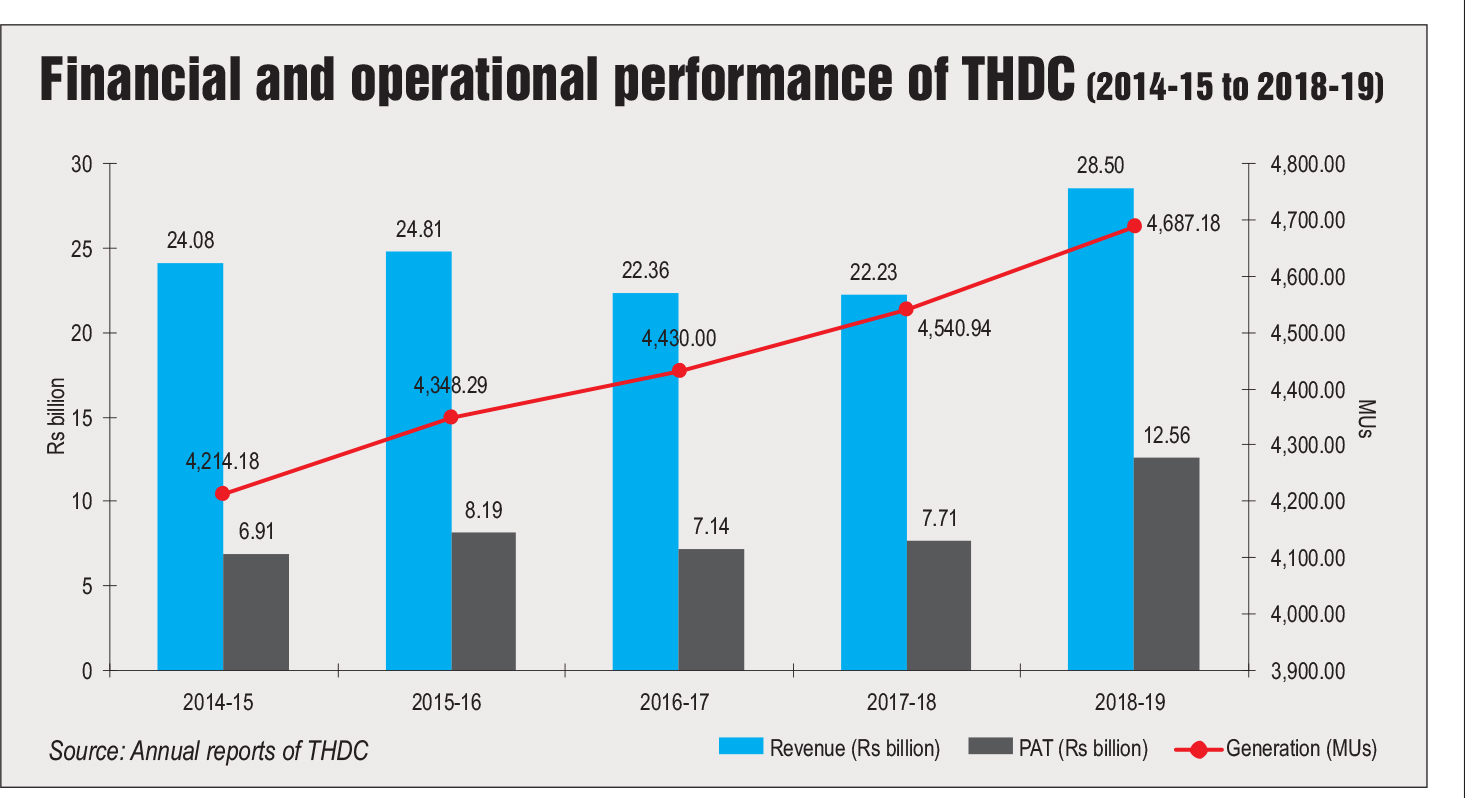 The Tehri PSP entails the construction of an underground machine hall housing four reversible pump turbine units of 250 MW each on the left bank of river Bhagirathi. The main feature of the project is the large head variation of about 90 metres between the maximum and minimum head, under which reversible units shall operate. The Tehri Dam reservoir will function as the upper reservoir and the Koteshwar Dam reservoir as the lower balancing reservoir. The project will provide 1,000 MW peaking power to the northern region with annual generation of 1,321.82 MUs. The PPAs for the project has been signed with four states/UTs, Delhi (600 MW), Haryana (100 MW), Uttarakhand (200 MW) and Rajasthan (100 MW) to provide power in off-peak hours.

The VPHEP is a run-of-the-river scheme. It envisages the construction of a 65 metre high concrete diversion dam, harnessing a gross head of 237 metres, on the Alaknanda river (a major tributary of the Ganga river). The capacity addition of 444 MW in the northern region will reduce the peaking power shortage in the region. It has an annual design energy of 1,657.09 MUs. Of the 13 per cent free power to be provided to the home state Uttarakhand, 1 per cent will be utilised towards local area development. So far, the construction of the Coffer dam has been completed. The excavation work of three desilting chambers, a dam, a powerhouse and a transformer hall is in progress. A tunnel boring machine has been commissioned to take up the construction of a 12 km long head race tunnel. The project is proposed to be funded with a debt:equity ratio of 70:30. For the funding of the debt portion of the project, a loan agreement for $648 million was signed with the World Bank on August 10, 2011. The loan became effective on November 7, 2011 with a tenure of 29 years.

The Uttar Pradesh government allotted the Khurja Super Thermal Power Project (comprising two units of 660 MW each) in Bulandshahar district to THDC for implementation. The project has received an investment approval of Rs 110.84 billion. The foundation stone for the project was laid in March 2019. So far, two major packages, the steam generator package and the turbine generator package, have already been awarded. Work at the site is in progress. In order to meet the fuel requirement of the Khurja STPP, the Ministry of Coal allocated the Amelia coal mine in Singrauli, Madhya Pradesh, to THDC, in August 2016. The process of land acquisition and clearances for the mine is in progress. The project is expected to be commissioned by 2023-24.

THDC aims to add 50 MW of solar capacity each year till 2024-25. Currently, it has one solar power project of 50 MW under construction at Kasargod, Kerala, for which a tripartite agreement was signed amongst SECI, Kerala State Electricity Board (KSEB) and THDC in March 2015. The power sale agreement was signed between KSEB and THDC in 2019. The implementation work for the solar PV power plant has been awarded to Tata Power Solar System Limited, with commissioning scheduled for May 2020. 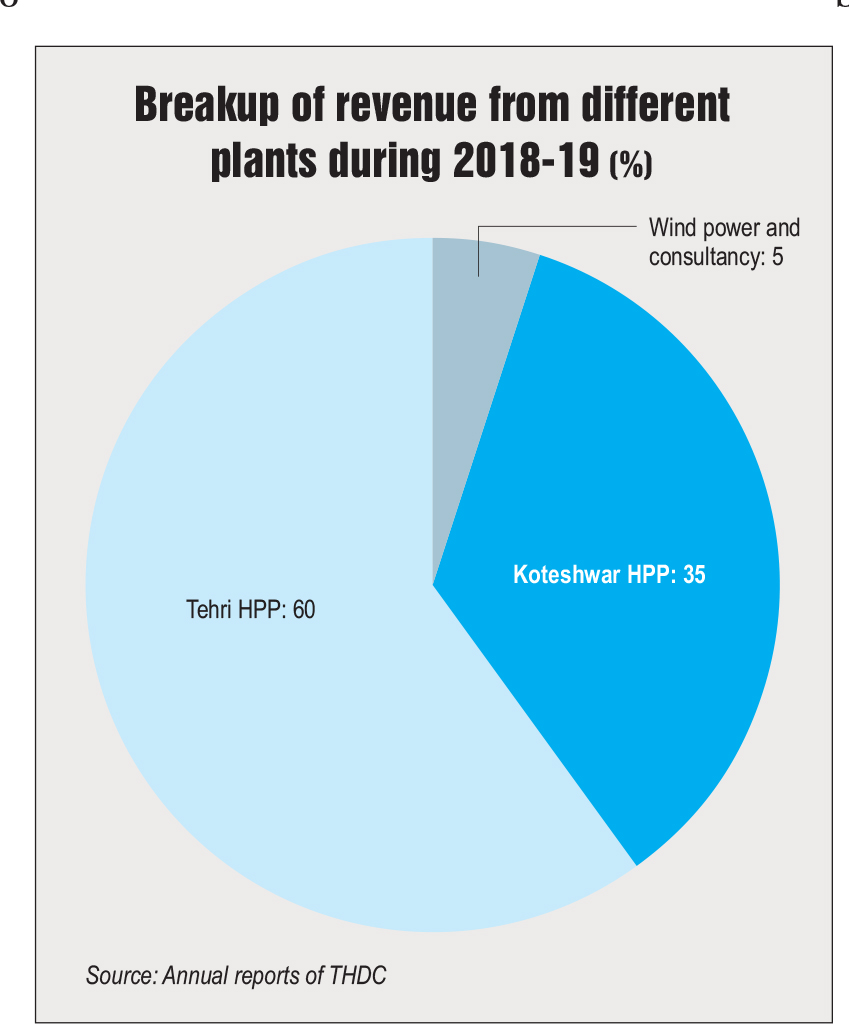 THDC is also exploring the possibility of hydroelectric and renewable energy project development in other states as well as in neighbouring countries. It has two hydro PSP schemes under survey and investigation. One of these is the MalshejGhat (700 MW) project. The Maharashtra government has assigned this pumped storage scheme (PSS) to the joint venture (JV) of THDC and NPCIL. It is required to update the detailed project report (DPR) and subsequently implement the project, if found viable. The DPR for the MalshejGhat project has already been submitted, and the consent on the implementation agreement is awaited. The other PSS under survey and investigation is the 400 MW Humbarli PSS, also located in Maharashtra.

Under the India-Bhutan cooperation on hydro sector development, the Ministry of Power has allotted two projects to THDC, the Sankosh Storage Project (2,560 MW) and the Bunakha HEP (180 MW). THDC is required to update their DPRs and implement the projects under the intergovernmental authority model with Bhutanese PSUs. THDC has updated the DPRs for these projects while modalities for the execution of these HEP projects are under process.

THDC is also in the process of acquiring new solar power projects. The Ministry of New and Renewable Energy has selected THDC to develop 1,800 MW of ultra mega renewable energy power parks through a special purpose vehicle (SPV)/JV company in the state of Uttar Pradesh and 1,500 MW in Rajasthan. THDC is in the process of formation of SPVs/JVs with the agencies of the respective state governments. 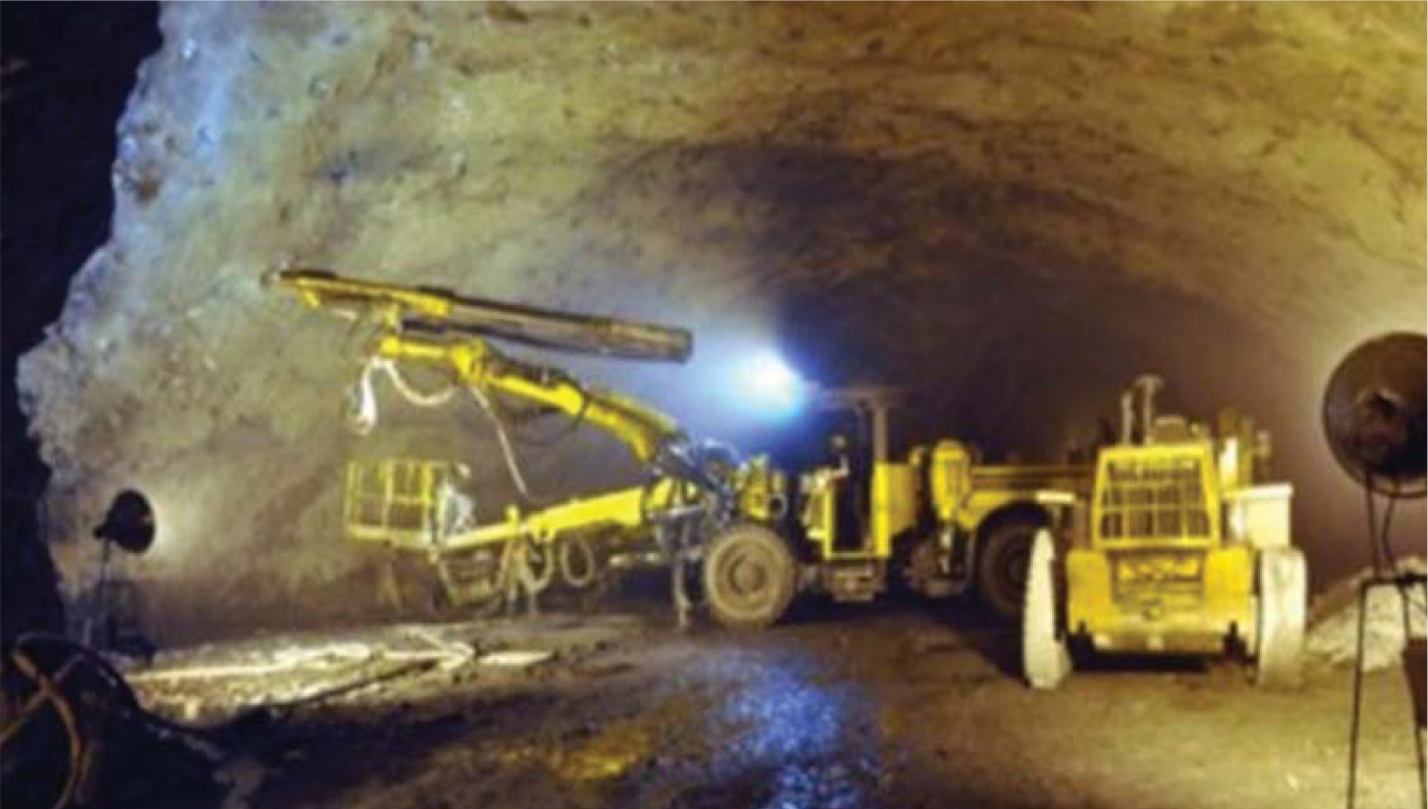 As a developer of thermal, hydro and renewable projects, there are significant execution risks that the company faces. The key challenges for the company’s hydro projects include law and order problems, as well as land acquisition issues. Geological surprises due to difficult terrain and poor geology also add to project implementation challenges. Delays in statutory clearances and approvals have also been a concern for the company.

The Tehri PSP and the VPHEP are also facing a financial crisis with their civil contractors. The company’s thermal power projects have also been impacted by law and order problems, land acquisition, and delays in statutory clearances and approvals. For its solar projects, land acquisition has been a major hurdle.

Notwithstanding these challenges, THDC has significantly reduced its green house gas emissions, thus helping in furthering the government’s objective of promoting renewable energy sources of generation. With its upcoming pumped storage hydro and solar projects, THDC will also be able to support the country’s climate change goals. n