While public health personnel are rightly being hailed as the front-line warriors in the country’s fight against Covid-19, there were other silent warriors whose support made our lives comfortable during the pandemic. Unlocking their true “power” in these tough times, power system operators emerged as indispensable partners in the country’s fight against the virus. The imposition of lockdown, starting March 25, 2020, and the subsequent closure of the majority of offices and industrial and commercial units in the country has caused around 25 per cent reduction in electricity consumption, significantly widening the gap between electricity demand and supply in the country. In an already low-demand season, this significant load reduction for a long duration is a major challenge for grid operators working towards keeping the grid healthy and glitch-free.

Electricity grid operators had to counter these challenges in real time to address the large drop in the quantum of load; achieve minute-to-minute balance between the severely curtailed load and generation; maintain the must-run status of renewable generation even under these stressed conditions; and keep the workforce safe and motivated while ensuring smooth operations of the control room despite the various restrictions and social distancing norms.

Demand variation during the day is a normal phenomenon in a large grid like that of India. Since these variations are spread over a wide area with diversity in demand, they are addressed seamlessly. However, managing a sustained duration of 25 per cent load reduction in a low-demand season was a major and unanticipated challenge. The Indian electricity grid has an installed capacity of 369 GW as of February 2020 and the break-up of the installed capacity is shown in Fig. 1. It can be observed that it is a predominantly thermal grid with a small but growing share of renewable power. Under the lockdown, due to closing of offices and commercial establishments, the load curve also got distorted with a large reduction during the daytime. However, due to continuing residential lighting load during the peak evening period, the reduction in demand may not be of equivalent quantum.

Prior to the lockdown, the peak demand met through the Indian electricity grid on a typical day, say, March 18, 2020 (just one week before the lockdown), was around 164.4 GW, while the total energy consumed being around 3,605 MUs. Fig. 2 shows the comparison of the 24-hour demand met on the day of the lockdown, that is, March 25, 2020 (lowermost curve) with that of March 18, 2020 (uppermost curve), precisely one week before. Fig. 3 shows the reduction in demand due to the lockdown both in terms of maximum demand (MW) and energy consumed (MUs per day), based on the analysis of daily demand met during the above period. 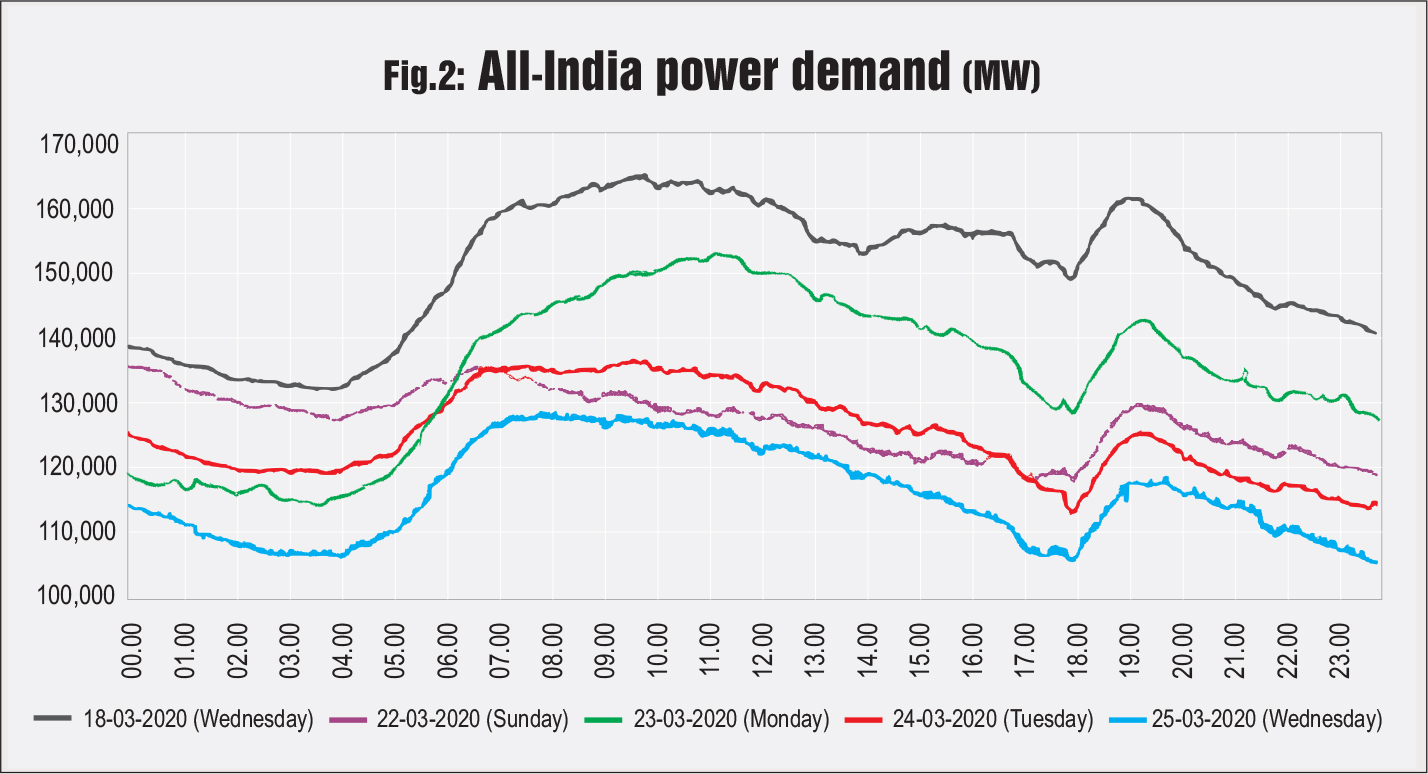 Preserving must-run status of renewable generation: In addition to an overall reduction and substantial changes in the load profile, keeping the must-run status of renewable power intact was a challenge. Both solar and wind generation fall under the must-run category and it is believed that the system operator will make all efforts to evacuate all the available renewable generation. Hence, under the changed situation, envisaging the right demand curve, planning the generation level with the right mix of energy resources, and maintaining grid safety, security and economy are some of the main operational challenges and addressing them is really a commendable effort. 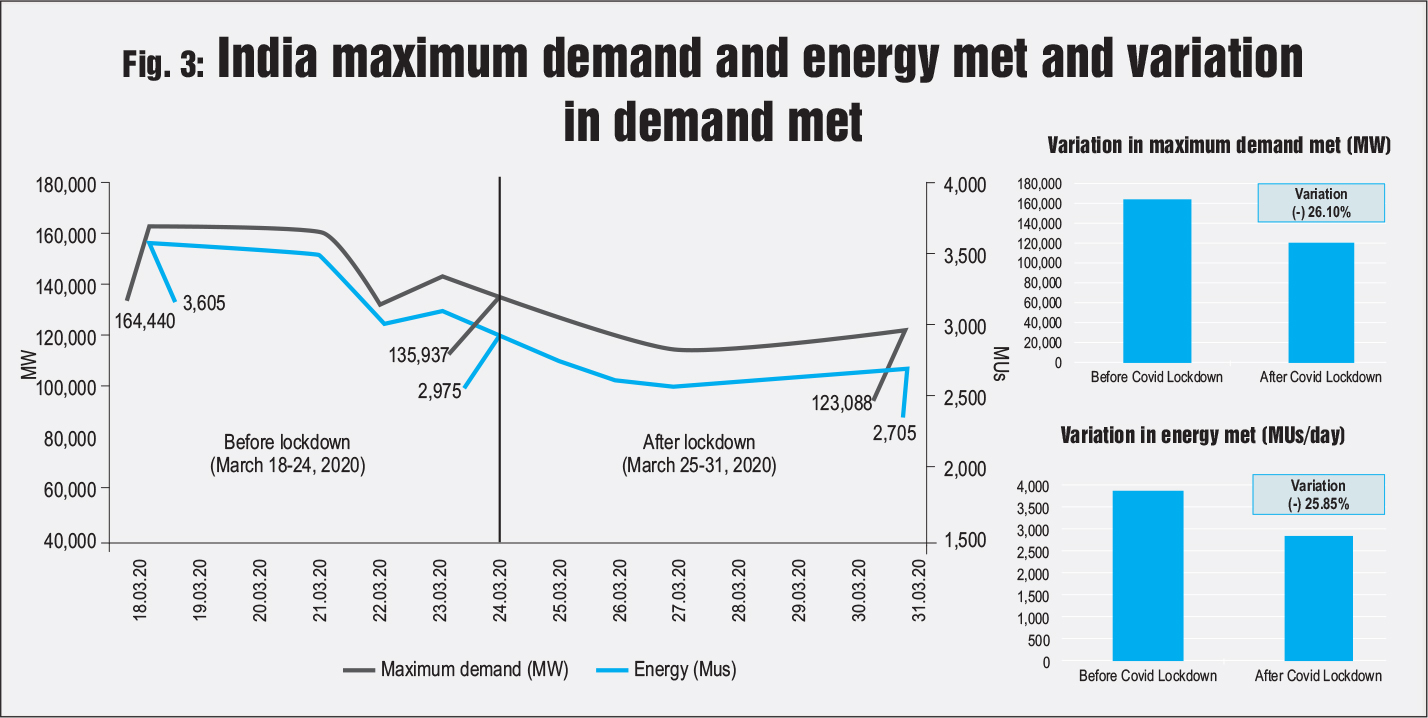 Wind generation: Fig. 4 shows that due to the Covid-19 lockdown, there has been no reduction in generation from wind power plants; rather there is an enhancement of 25.75 per cent, possibly due to the increase in wind flows.

Solar generation: Fig. 5 shows that primarily no backing down of solar generation was carried out and its must-run status was also maintained. 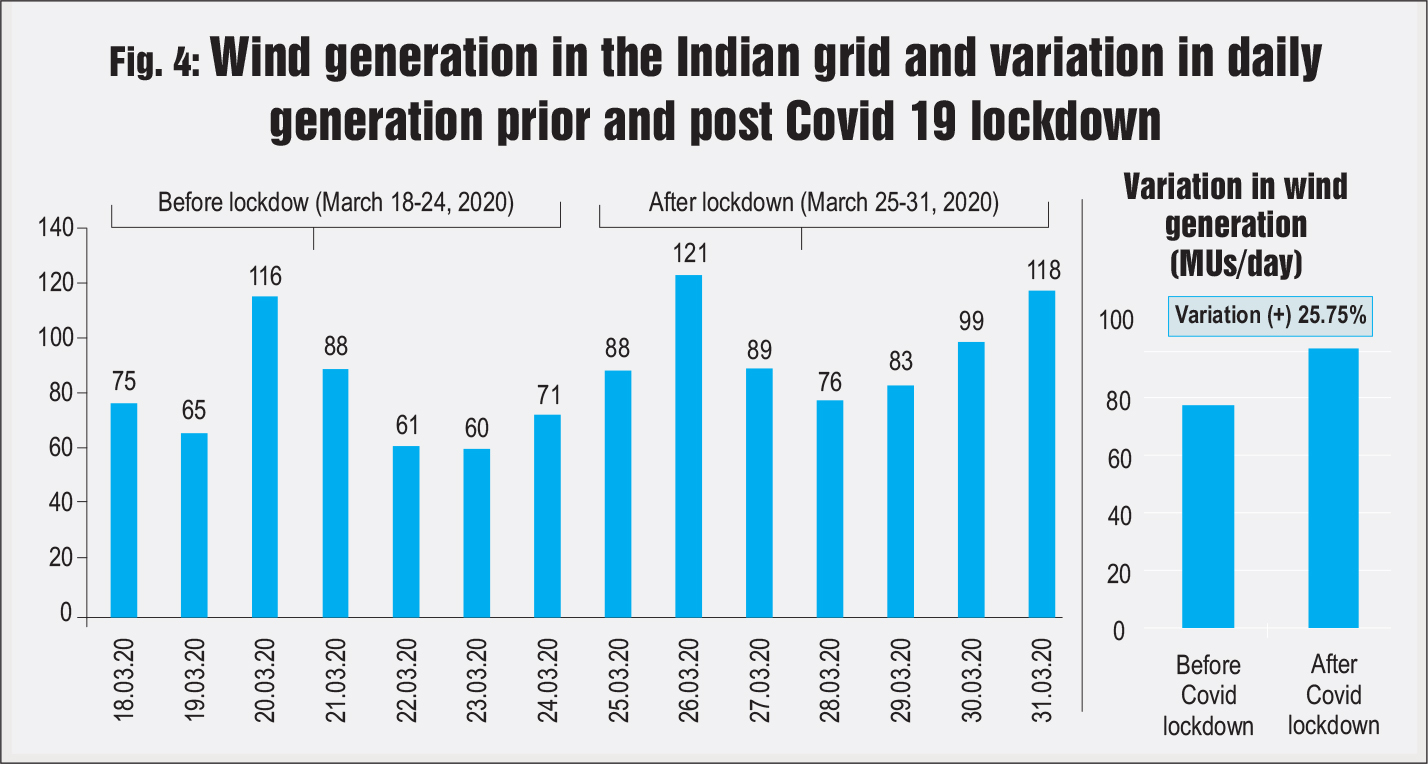 The above analysis shows that even under such challenging situations, involving a significant quantum of load crash, the must-run status of renewable generation, mainly wind, solar and hydro, was maintained and grid norms were followed in the true sense and spirit by flexing/backing down thermal generation to high values.

Managing the continuity of control centre operations: Restrictions in the movement of personnel and other services posed another major challenge towards maintaining seamless grid operations. It has become important to ensure the continuity of load despatchcentre operations while minimising human-to-human contact and providing continued logistics support to control centres. Grid reliability and integrity also need to be continuously assessed while ensuring coordination and cooperation amongst different control centres. To address all these challenges, urgent measures were initiated – thorough sanitisation of control rooms, restriction in entry, allowing only essential team members; and transfer of most of the offline functions to the work-from-home category. Further, emergency meetings of the Forum of Load Despatchers were conducted and backup control rooms were prepared in order to meet any unforeseen contingency, such as the need to quarantine the main control centre. 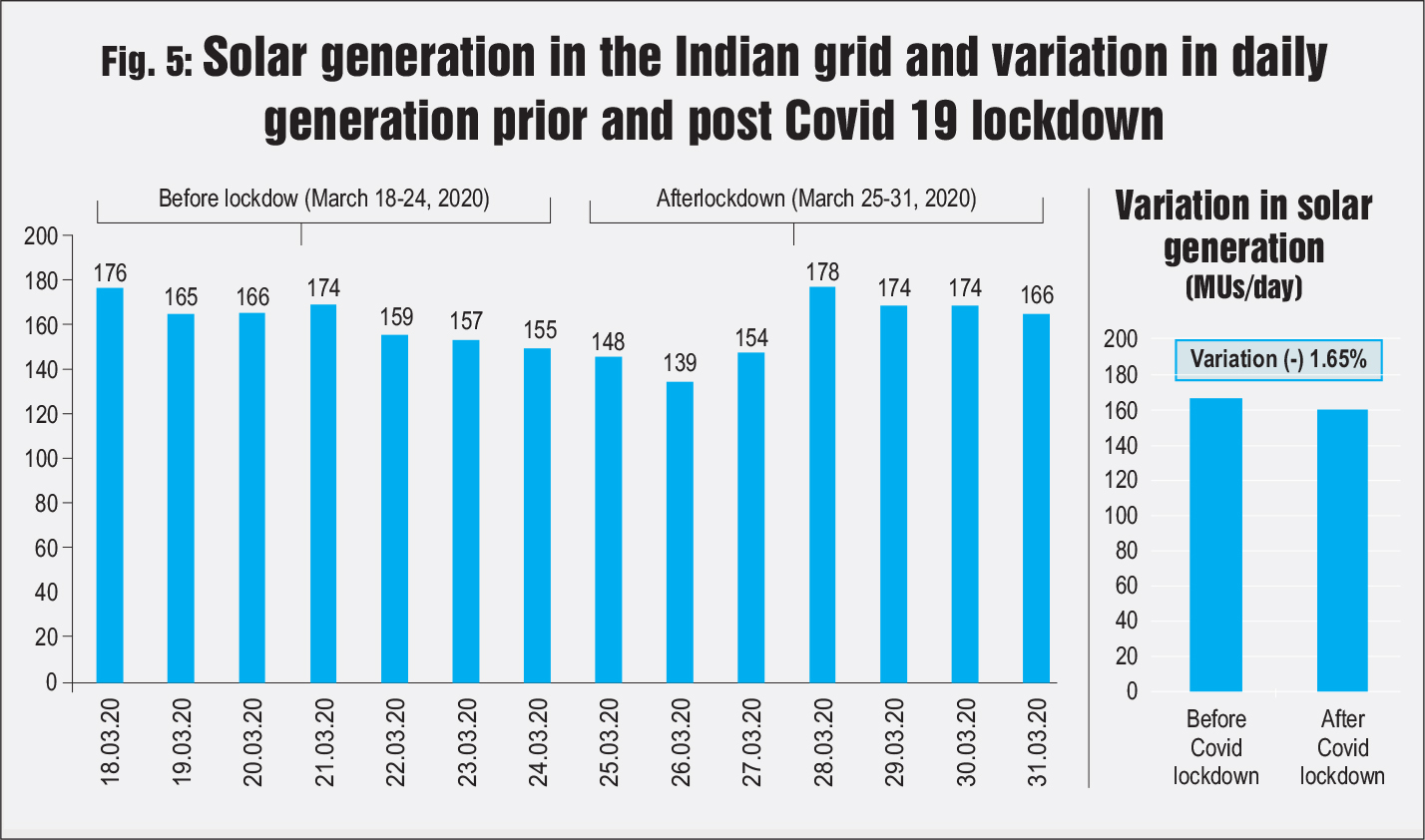 The long-term impact of the Covid-19-induced lockdown on both the renewables and thermal businesses, as well as on electricity distribution companies in the country will be visible only over the next few months. However, one point that has emerged during this period is that thermal generation, which is often seen as an unfavourable generation source due to fossil fuel usage and carbon emissions, has provided most of the flexibility towards load management, thereby helping in grid management and keeping the lights on. The proactive and innovative measures implemented by power system operators in the country ensured safe and secure operations and continued availability of power across the length and breadth of the county. This lockdown has provided important insights into the strength and resilience of the Indian electricity grid. We can be confident that the necessary systems and procedures are in place to operate one of the largest operational synchronous grids in the world. 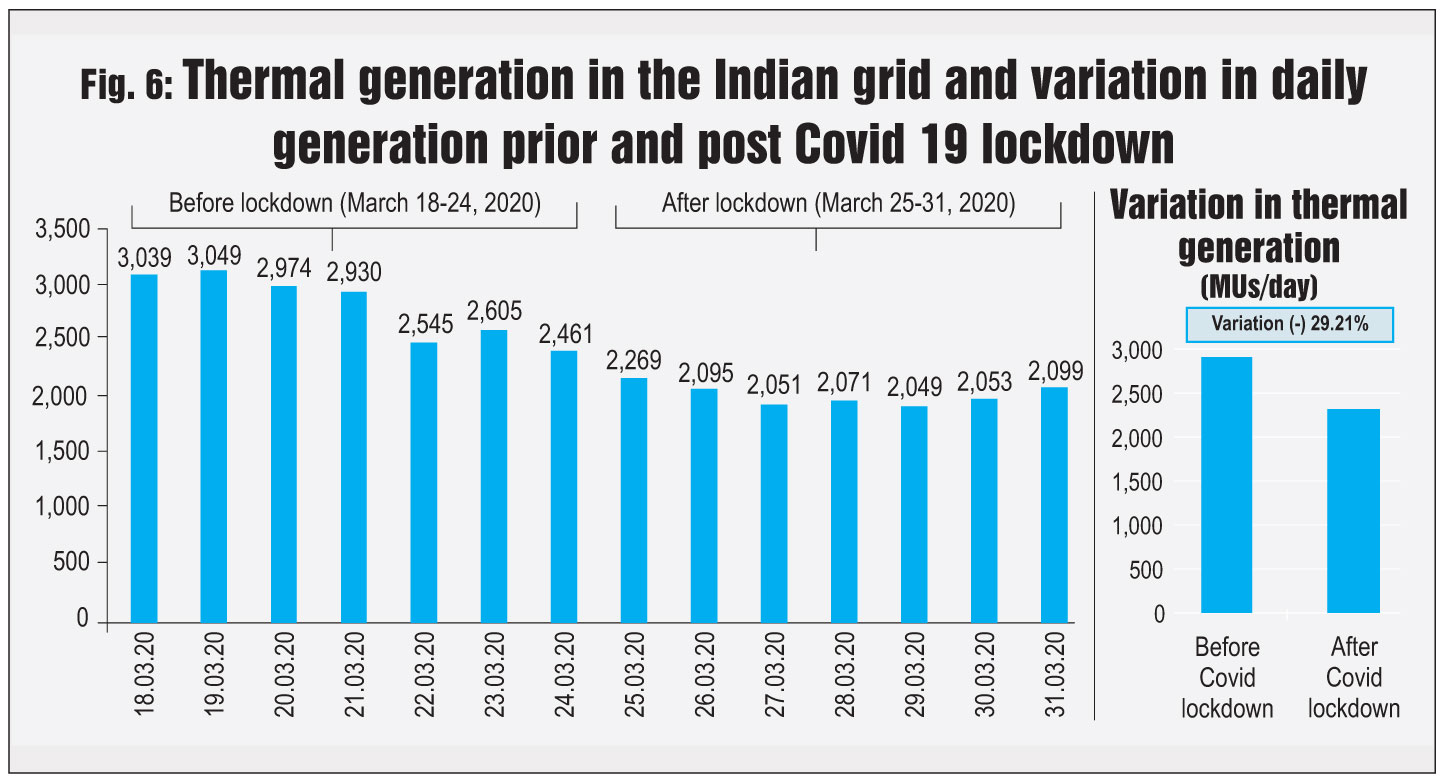