Over the past few years, the central government has launched a number of schemes for improving the health and infrastructure of the power sector. Primary among them was the Ujwal Discom Assurance Yojana (UDAY), launched in 2015, to improve the financial and operational efficiency of state discoms, and its term came to an end in March 2020. Post UDAY, the government is reportedly working on another programme, tentatively called ADITYA (Atal Distribution System Improvement Yojana), which is expected to be a performance-linked reform scheme to revive the ailing state power distribution utilities. The government has also introduced schemes for urban and rural distribution system strengthening under the Integrated Power Development Scheme (IPDS) and the Deendayal Upadhyaya Gram Jyoti Yojana (DDUGJY). The latter was subsumed under the Pradhan Mantri Sahaj Bijli Har Ghar Yojana (Saubhagya) under which near 100 per cent household electrification was achieved. An update on the progress under these schemes…

Under UDAY, 27 states and five union territories signed MoUs with the Ministry of Power (MoP). Of these, 16 states sined comprehensive MoUs and 11 states and 5 union territories (UTs) signed MoUs for operational improvement only. Under the scheme, the states took over 75 per cent of the debt of their distribution utilities by way of bonds to help ease their debt burden. 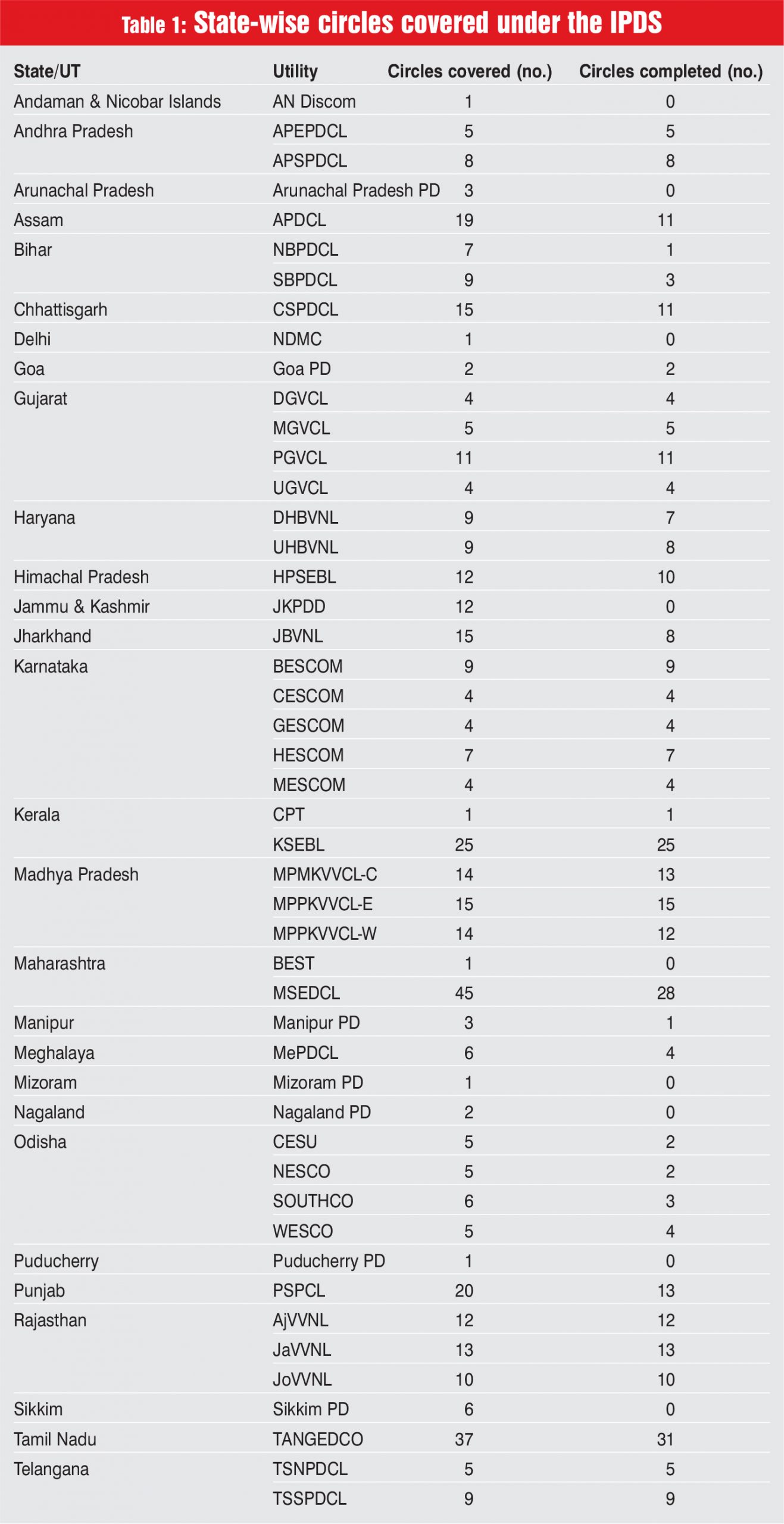 As of April 2020, a total of Rs 320.58 billion has been sanctioned under the scheme. This includes a government grant of Rs 201.03 billion, of which Rs 123.68 billion has been released. Of the total sanctioned outlay, Rs 282.6 billion is for system strengthening of the sub-transmission and distribution network, Rs 9.85 billion is for IT enablement of discoms, Rs 7.92 billion is for enterprise resource planning, Rs 8.34 billion is for smart metering, and the remaining is for substation monitoring and gas-insulated substations. In terms of physical progress, as of March 2020, 30,350 ckt. km of overhead lines have been installed and 67,851 ckt. km of underground/aerial bunched cables have been laid. Further, opening of 868 new substations and capacity augmentation of 1,442 substations have been carried out.

Overall, the scheme has been sanctioned in 546 circles, and as of March 2020, the scheme stood completed in 403 circles. 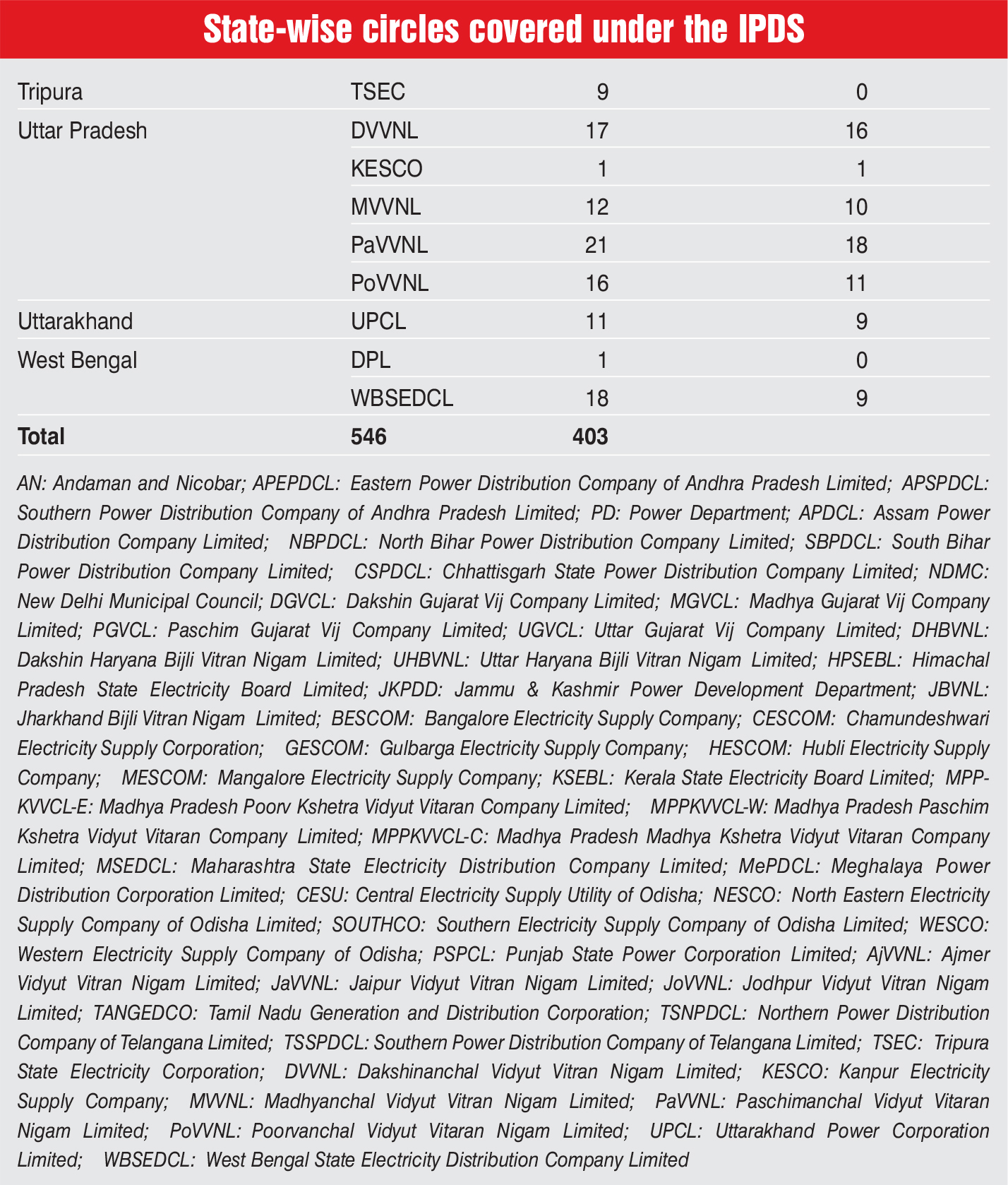 Saubhagya was launched in September 2017, with the aim of providing electricity to every willing household in both rural and urban areas by March 2019. The scheme aimed at providing last-mile connectivity to individual households, as against village electrification targeted under earlier electrification schemes. The scheme has an outlay of Rs 163.2 billion including a gross budgetary support of Rs 123.2 billion from the Government of India. The grant disbursed under Saubhagya was Rs 27.09 billion in 2018-19. In 2019-20 (up to May 31, 2019), a grant of Rs 910 million had been disbursed.

As of March 31, 2019, all the states had declared electrification of all households, except 18,734 households in left-wing extremist-affected areas of Chhattisgarh. Subsequently, seven states – Assam, Chhattisgarh, Jharkhand, Karnataka, Manipur, Rajasthan and Uttar Pradesh  – reported 1.9 million unelectrified households, which were earlier unwilling, and were now willing, to get electricity connection, identified before March 31, 2019. The states were asked to electrify these households under Saubhagya by December 31, 2019. However, of the 1.9 million households, only 1.07 million households were electrified up to January 31, 2020. Most of the remaining households (650,000) are in the state of Uttar Pradesh.

Launched along with the IPDS in December 2014, the DDUGJY targets the electrification of all villages and strengthening of sub-transmission and distribution infrastructure in rural areas. Projects worth Rs 434.39 billion have been sanctioned under the DDUGJY. Further, additional projects of Rs 142.7 billion have been sanctioned for the creation of additional infrastructure to cater to the requirement of household electrification under the Saubhagya scheme. The scheme is available till 2021-22. Funds disbursed under the scheme were Rs 164.65 billion in 2018-19 and Rs 4.3 billion in 2019-20 (up to May 31, 2019).

In terms of physical infrastructure as of March 2020, decent progress has been achieved considering the large focus on expeditious completion of village and household electrification. Feeder separation involving 100,901 ckt. km of 11 kV lines has been completed. Achievement under the system strengthening component involves establishment/augmentation of 3,190 new sub-stations; installation of 497,268 distribution transformers; 355,708 km low tension and 176,045 km high tension (11 kV and 33/66 kV) lines have also been erected. The reason for such slow progress in some of the states has been attributed to delays in the award of the contract, delays in getting forest and railway clearances, land acquisition for substations, right-of-way (RoW) issues, law and order issues and difficult terrain. 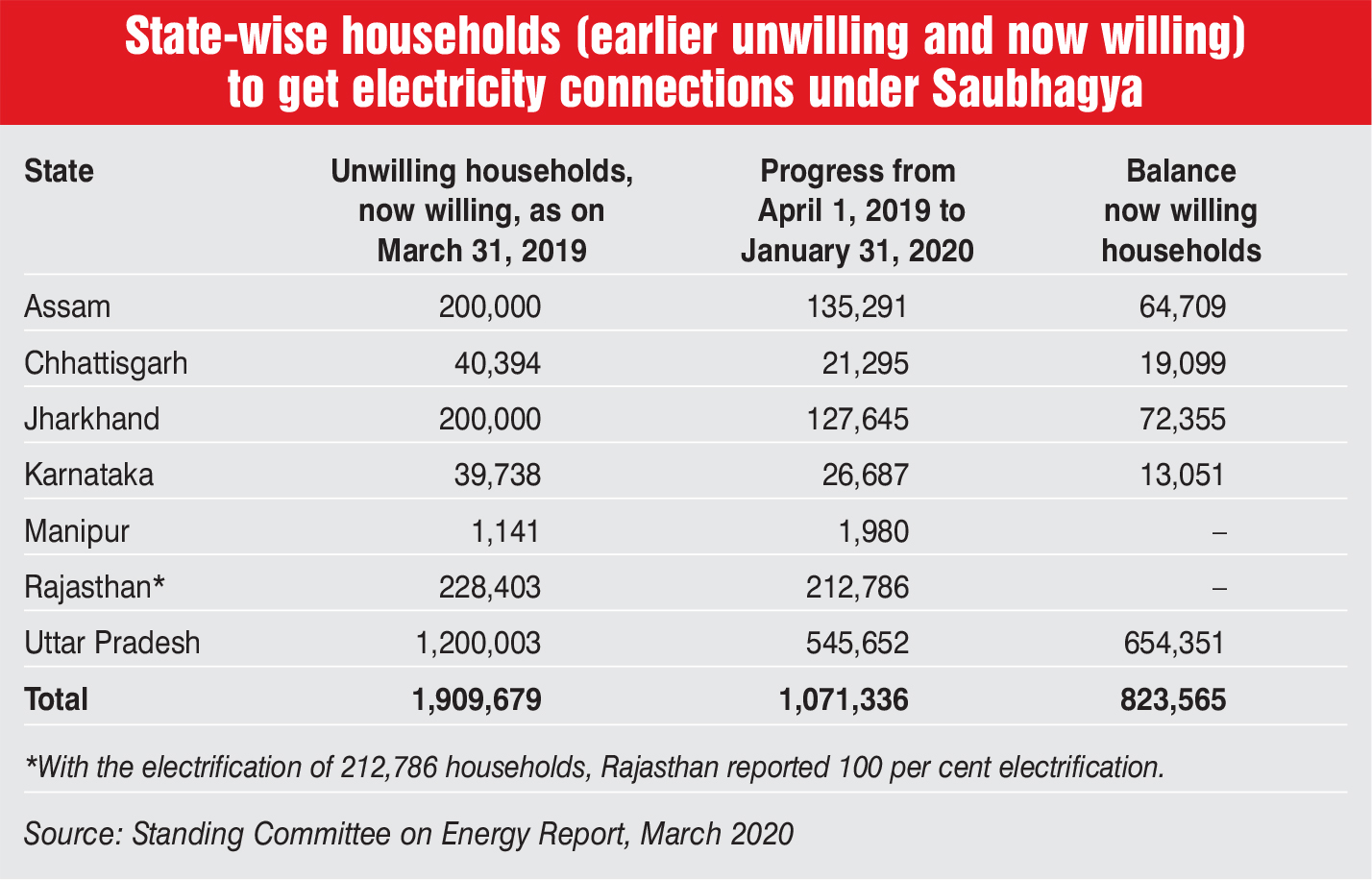 Significant progress has been made under various government schemes, but a lot still remains to be done. The government has proposed the ADITYA scheme, which will replace UDAY and include components to incentivise reforms by the states. The government expects an outlay of about Rs 3,000 billion under the scheme. As per reports, ADITYA is expected to be implemented in three phases till 2024. Under the first phase, the government has proposed infrastructure upgradation, including the implementation of smart meters. Under the second phase, inefficient discoms are likely to undergo institutional reforms. The third phase of the scheme would focus on training and capacity building.

The scheme also lays emphasis on introducing private participation. States with more than 18 per cent AT&C losses can opt for an infrastructure support reform package, which entails choosing between running discoms on the public-private partnership model, outsourcing distribution to multiple supply and network franchisees and working through input-based distribution franchisees.

Overall, with the sector facing a reduction in power demand in the wake of the Covid-19 pandemic and the nationwide lockdown, the discoms’ operational and financial performance will remain constrained in the months ahead. Reforms and government programmes will be key to keep the distribution segment afloat during and after the present crisis.

Smart meters provide remarkable solutions to increase the operational efficiency of discoms. Due to a plethora of proven commercial benefits offered, discoms have been adopting smart meters increasingly and this has created a huge market […]

REC Market Update: Uncertainty continues even as stocks pile up

In an attempt to address the issue of the pile-up of renewable energy certificates (RECs) and introduce more realistic prices, the Central Electricity Regulatory Commission (CERC) issued new forbearance and floor prices for RECs in […]

Dakshin Gujarat Vij Company Limited (DGVCL), one of the four state discoms in Gujarat, was incorporated in 2003 post the unbundling of the erstwhile Gujarat Electricity Board. It caters to around 3.11 million consumers in […]