The importance of the micro, small and medium enterprise (MSME) sector in India’s socio-economic development is well understood, especially in terms of its contribution (29 per cent) to GDP, exports and employment. Likewise, there is immense need and potential for improving energy efficiency and productivity in MSMEs, so that they can become competitive. Although significant progress has been made towards achieving these goals through interventions by various agencies and organisations – both public and private, many gaps still remain in the ecosystem for providing energy efficiency services to MSMEs.

The Ministry of MSMEs has announced its aims to substantially increase the share of the sector in the country’s GDP and ensure that it provides employment to at least 150 million people vis-à-vis the 111 million at present. It is making efforts to reduce logistics costs, for instance, by developing inland waterways for transportation. Also, grid electricity rates are high, typically, Rs 11 per kWh, at a time when the cost of solar power has reduced to Rs 2.40 per kWh. The development and promotion of innovative energy efficiency equipment/appliances at affordable prices for MSMEs, and facilitating the usage of renewable energy-based power can help reduce the overall demand and cost of grid power.

The Bureau of Energy Efficiency (BEE) had initiated an SME programme during the year 2009 to improve the energy performance of the MSME sector, by accelerating the adoption of energy efficiency technologies (EETs) and best practices in different energy-intensive SME subsectors such as foundry, forging, ceramics, refractory, glass, dairy and textiles.

At the National Conclave on Enhancing Energy Efficiency in MSMEs, organised by the BEE in September 2019, a number of knowledge resources and initiatives were launched. These included a BEE manual on “Energy Conservation (EC) Guidelines for the MSME Sector”; and a BEE knowledge portal, “Simplified Digital Hands-on Information on Energy Efficiency in MSMEs (SIDHIEE)”, showcasing EETs that have been successfully demonstrated in various energy-intensive MSME subsectors.

The EC Guidelines covered a wide range of MSMEs where the energy costs were predominant in some sectors (Category C, such as dairy, glass and textiles, and Group D, such as brick, food and limestone) and where raw material costs were the highest in a few sectors like micro industries.

An MoU was signed between the Development Commissioner (MSME) and the BEE for improving the overall energy security of the MSME sector through initiatives such as comprehensive energy mapping of MSMEs, knowledge exchange and capacity building programmes, and demonstration of EETs.

Certificates were awarded to MSMEs that had achieved ISO 50001 standards for their energy management systems, and to MSME entrepreneurs who had developed innovative low-carbon technologies (LCTs) under the Facility for LCT Deployment programme, being implemented by the BEE and UNIDO with support from the Global Environment Facility (GEF).

In the private sector, the Shakti Sustainable Energy Foundation (SSEF) is providing support to the SAMEEEKSHA platform to promote and strengthen knowledge sharing among key stakeholders.

There are a host of tried-and-tested EETs available in India, along with several innovative technologies. However, EETs become attractive for MSMEs only if entrepreneurs are convinced that such technologies can help improve their businesses by reducing their energy costs, increasing their profits, and making them more competitive.

While MSMEs generally operate on thin profit margins (often as low as 5-10 per cent), there are a large number of enterprises for which energy costs make up 20-30 per cent of production costs. For such energy-intensive MSMEs, reduction in energy costs by even a few percentage points will bring them a huge increase in profits. For example, electric motors are often called the “workhorses” of industry. They drive process equipment and utilities, and account for 70 per cent of overall electrical energy consumption in industries. Most countries in the world have given top priority to the adoption of higher efficiency (IE3) motors in the industrial sector.

However, despite the availability of IE3 motors in Indian markets and their benefits, industrial units, particularly MSMEs, continue to use motors of poor efficiency. This is owing to the low level of awareness in the sector with respect to the advantages that IE3 motors offer, and the fact that their relatively higher upfront costs are quickly recovered through savings in energy costs. Other factors are the lack of access to financing and technical support required for undertaking energy efficiency studies on their existing motor systems; quantification of energy and cost savings that result from the replacement of motors by IE3 motors; paybacks on their investment; etc.

TERI and the SSEF had partnered as part of a project to promote the adoption of IE3 motors among MSMEs in the Ankleshwar chemical industry cluster in Gujarat. This cluster had about 750 chemical units, mainly MSMEs, which used motors for a range of applications in agitators, pumps, fans, centrifuges, dryers, etc. Most of the motors were of standard efficiency. TERI conducted energy audits which revealed that energy savings of 5-6 per cent could be achieved by replacing the existing motors with IE3 motors; the savings would increase to 10-15 per cent if the IE3 motors were integrated with systems such as variable frequency drives (VFDs), soft starters and gear assemblies.

Under the project, TERI aimed at identifying and strengthening cluster-level business entities having strong linkages with local MSMEs, and the business acumen and wherewithal to provide the MSMEs with turnkey services to replace their existing motors with IE3 motors. In essence, the business entity would function as a cluster-level demand aggregator and energy services company (ESCO). The subsequent awareness campaigns inspired four cluster-level equipment suppliers to take on the role of ESCOs. The ESCO then sourced the required IE3 motors, installed them with an initial investment by the MSME, and recovered the investment from the MSME on “deferred payment” terms, based on actual energy savings. The project thus demonstrated the effectiveness of the ESCO model in promoting EETs among industries. 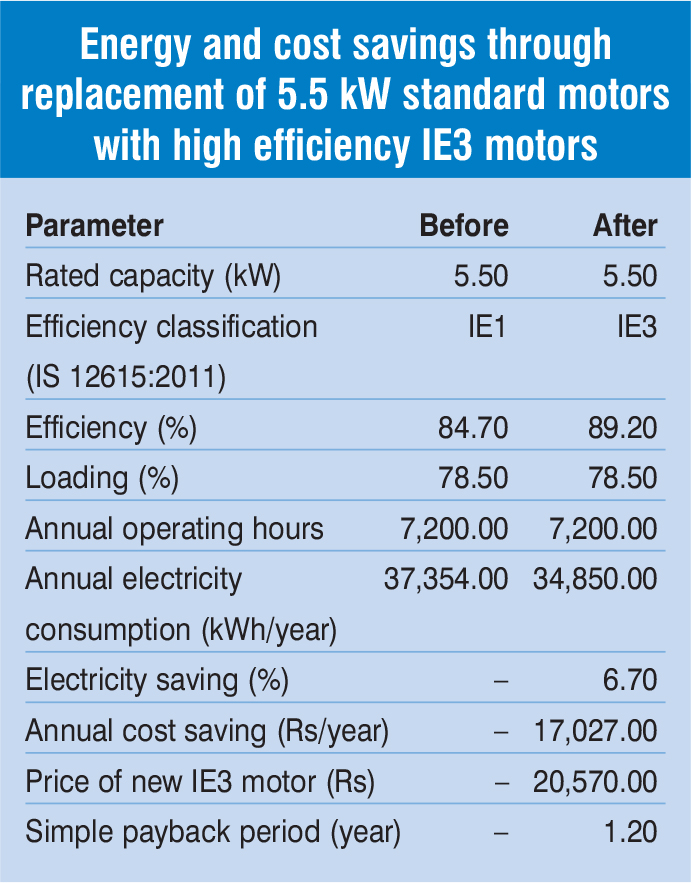 Both UNIDO and the Indian government concur that energy efficiency initiatives in the MSME sector should focus on three goals: creating awareness among MSMEs about the importance of energy use, and providing them with energy management services; transforming markets for EETs, services and financing; and bringing more innovative EETs within the realm of techno-economic viability.

However, unless consolidated data on energy use in manufacturing MSMEs is available, it will be difficult to increase awareness among MSMEs, which base their decisions on energy and cost savings with attractive paybacks on investment. For example, a water pump operating at 25-30 per cent efficiency and consuming about 4.7 kW power can be replaced by an energy efficient pump designed for 60 per cent efficiency and consuming 2.35 kW. The energy saving may appear small, but because the pump operates continuously, the monetary saving works out to almost Rs 350 daily or Rs 125,000 annually. So, the investment in the energy efficient pump can be recovered within three months. These findings are only possible with energy audits at such facilities.

Monitoring and minimising wastage of resources also presents huge opportunities for improving energy efficiency and productivity among MSMEs. For example, the level of losses in aluminium melting among Indian SMEs is usually between 4 per cent and 6 per cent as compared to 1-2 per cent in developed countries. To reduce waste, and save energy and costs, technological solutions must be found in process optimisation (for example, with upgraded equipment/machinery, temperature control systems, waste heat recovery systems, etc.).

Innovative business models can help overcome the financing barrier. An example is provided by the Surat textiles cluster, one of the 10 MSME clusters in which Energy Efficiency Services Limited (EESL), UNIDO and the Ministry of MSMEs are implementing a programme under GEF-5 to demonstrate and promote EETs. The business model used here involves the MSME paying 20 per cent of the EET cost upfront. The remaining 80 per cent amount is paid by UNIDO/EESL. The MSME has to repay the balance 80 per cent from savings in energy costs in quarterly instalments that can go up to a maximum period of three years.

The setting up of common utilities at the cluster level offers an innovative approach to promote energy efficiency and reduce production costs among local MSMEs. An example is in the Surat textiles cluster where, under the ESCO model, a common boiler facility that generates 14 MW power from cogeneration has been established to provide high pressure steam as well as metered low-cost electricity to 25 textiles units, which have discontinued using their own boilers.

A cadre of qualified energy efficiency professionals should be created soon to work at the cluster/unit level for creating local capacities and scaling up EETs. On the policy front, the time may have come to formulate plans to phase out all energy inefficient equipment/appliances from the market. In parallel, schemes should be drawn up to support EET manufacturers in modernising their production facilities.

Finally, achieving coherence of policies on energy, MSMEs and the environment is critical, along with promoting energy efficiency policies and instruments for MSMEs such as public procurement, standardisation and performance rating for equipment such as boilers, furnaces and compressors.