More than half of India’s capacity to generate power from natural gas is not being used due to lack of gas, putting plants on the verge of becoming non-performing assets. As of March 2020, the country’s 24,955.36 MW of installed gas-based power capacity was operating at a suboptimal plant load factor (PLF) of 22.15 per cent. Further, dependence on liquefied natural gas (LNG) imports has increased the generation cost for gas-based power plant operators, who are, hence, facing difficulties in finding buyers for their costly power.

In order to optimally utilise gas-based generation capacity and to meet the gas requirement of grid-connected gas-based capacity, the government is reportedly mulling over two schemes to procure 4,000 MW from gas-based power plants to rescue stranded units. The schemes include procuring 2,000 MW from gas-based plants through auction and bundling it with an equal capacity of solar power. Under this bundling scheme, solar capacity will be given priority to run. Gas-based capacity will run at times when solar power is not available and producers will have the option to sell their produce in the spot market during times of backdown by distribution companies. Another 2,000 MW will be procured through online reverse auction. 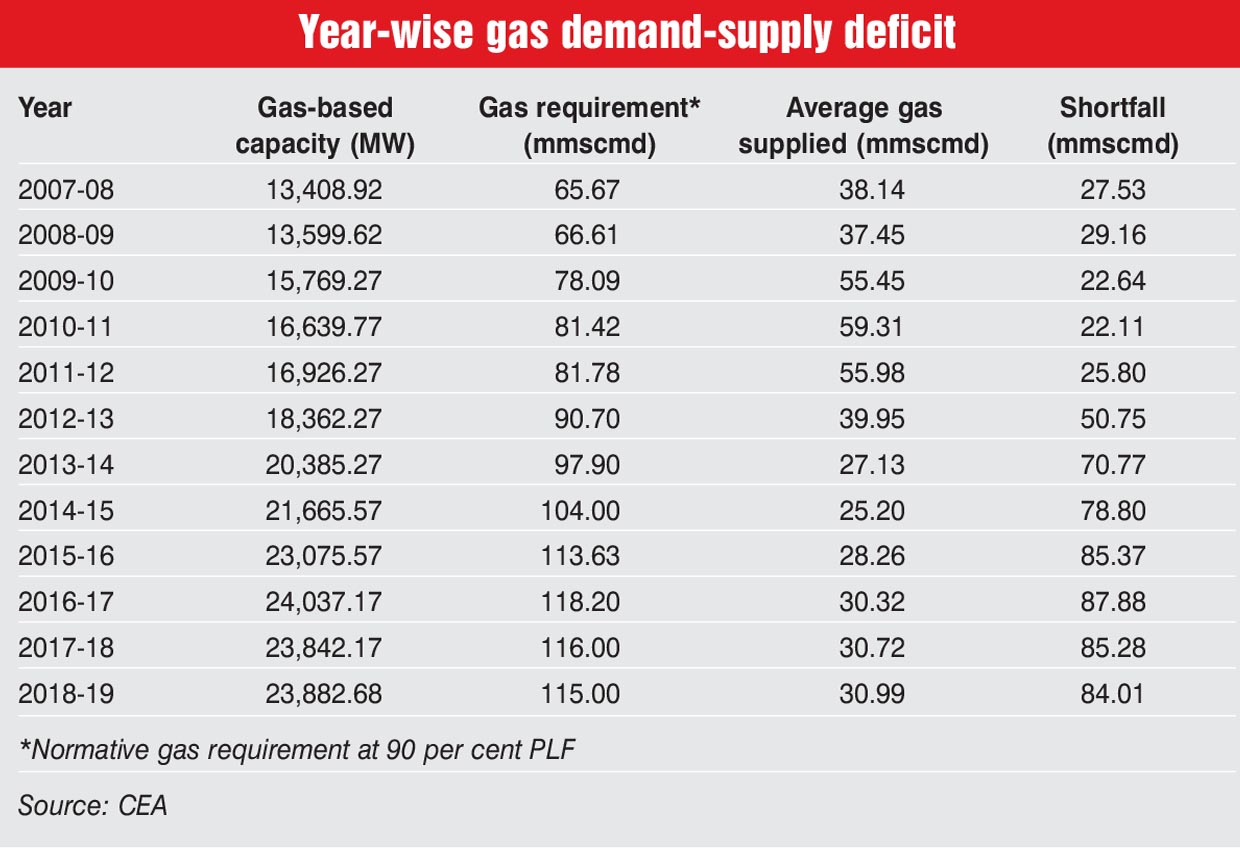 The coronavirus outbreak has, however, given a lifeline to the country’s stranded gas-fuelled power plants with the global LNG prices plummeting to less than $3 per million British thermal units (mmBtu) from a peak of $11.3 per mmBtu in September 2018. Power plant operators are looking to revive their gas-fired capacity by locking in cheaper spot LNG cargoes. According to data from the Petroleum Planning and Analysis Cell, the power sector’s R-LNG consumption rose by over 15 per cent to 639 mmscm during the quarter January-March 2020, compared to the same period in the previous year. Power generation and PLF from gas-based power plants also  improved marginally in March 2020 to 4,301.69 MUs and 23.22 per cent respectively, compared to 3,732.91 MUs and 20.16 per cent, respectively, over the same month in the previous year.

As the availability of gas is uncertain, the Central Electricity Authority’s (CEA) Optimal Generation Capacity Mix for 2030 report projects that no new gas-based projects will be added during this period. However, given the limitations on the use of coal for power generation due to its environmental consequences and constraints in developing hydro projects, existing gas-based power plants, which offer flexibility, could play an increasingly important role as 175 GW of renewables are added to the grid by 2022. Going forward, long-term policy interventions for securing economical sources of gas supply, stepping up domestic gas exploration and development of an adequate gas pipeline network can help ensure optimal utilisation of gas-based capacity in the country.