In order to reduce its emission intensity, India submitted its nationally determined contribution (NDC) target to the United Nations Framework Convention on Climate Change (UNFCCC). Energy efficiency plays a critical role in complying with those targets. Energy efficiency has dual benefits. It not only helps save money, but it also saves the environment. India has several energy efficiency schemes in operation at the national, state and sectoral levels. Currently, there are 14 energy efficiency programmes/schemes that are actively supporting the country’s NDC targets.

The Bureau of Energy Efficiency (BEE) as part of its annual study recently released a report on the impact of energy efficiency measures for 2018-19. The report, prepared by consultancy firm PwC, compares the actual energy consumption with the estimated energy consumption without energy efficiency measures. The findings of the report reflect that the adoption of energy efficiency schemes/ programmes led to overall electricity savings of around 113.16 BUs in 2018-19, which was 9.39 per cent of the net electricity consumption (1,204 BUs). This translated into monetary savings worth Rs 891 billion and reduced CO2 emissions by 151.74 million tonnes (mt).

A round-up of the key takeaways from the report…

The study assessed the impact of all the energy efficiency schemes/programmes in India in terms of total energy saved and reduction in the amount of CO2   missions achieved during the year. The report also assessed the resultant impact of the current schemes at the national and state levels.

In 2018-19, the implementation of various energy efficiency schemes led to overall thermal energy savings of 12 mtoe, while overall electricity savings were 136.37 BUs. Overall, these energy savings translated into monetary savings of Rs 891.22 billion as against Rs 536.27 billion in the previous year. These efforts have also contributed to 151.741 mt of CO2 emission reduction, an increase from the 108 mt of CO2 reduction recorded in the previous year. The total energy savings achieved in 2018-19 were 23.73 mtoe, which is 2.69 per cent of the total primary energy supplied (estimated to be 879.23 mtoe) during the year. 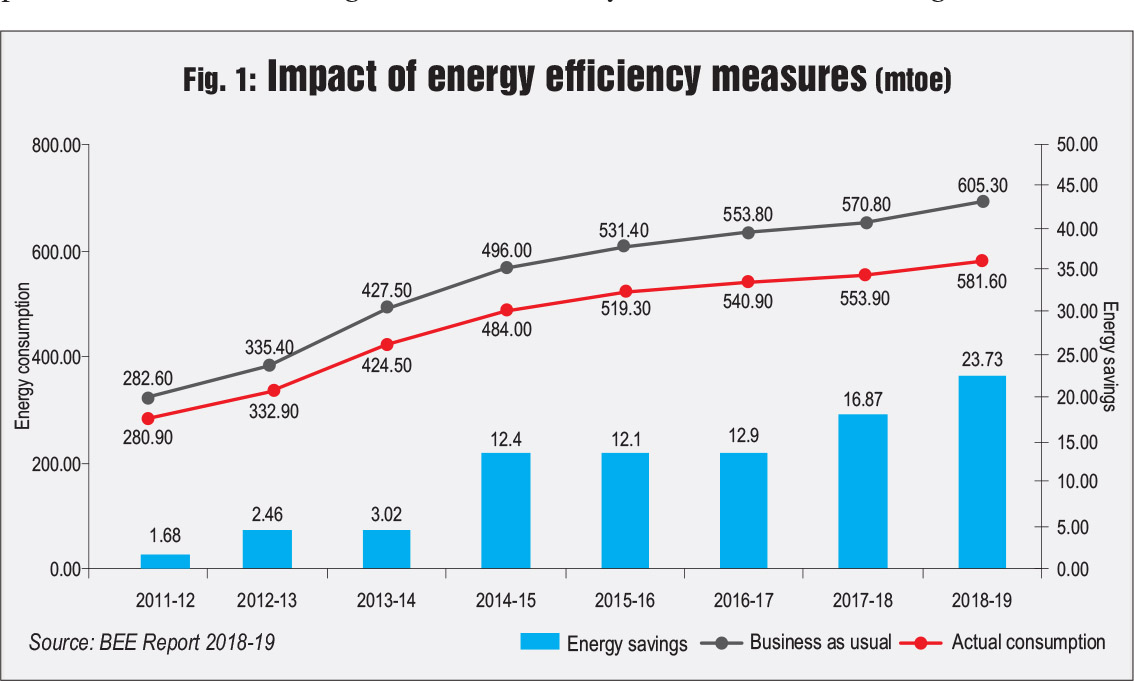 Micro, small and medium enterprise (MSME) sector: The BEE-SME programme was focused in four clusters (Ludhiana, Indore, Varanasi and Pali) during 2018-19. Energy efficiency and technology upgradation interventions carried out by BEE have led to savings of 1,166 toe and emission reduction of 3,934 t CO2 annually. The BEE-United Nations Industrial Development Organization programme, operational in 12 clusters, led to energy savings of over 8,512 toe and contributed to reduction of 46,512 tonnes of CO2 emissions annually. Further, intervention by SIDBI and BEE under the World Bank-Global Environment Facility project has promoted energy efficiency in 25 clusters across India. The interventions carried out during Phase II (2015-17) and Phase III (2017-19) have led to energy savings of 0.0122 mtoe and prevented 72,585 tonnes of CO2 emissions annually. 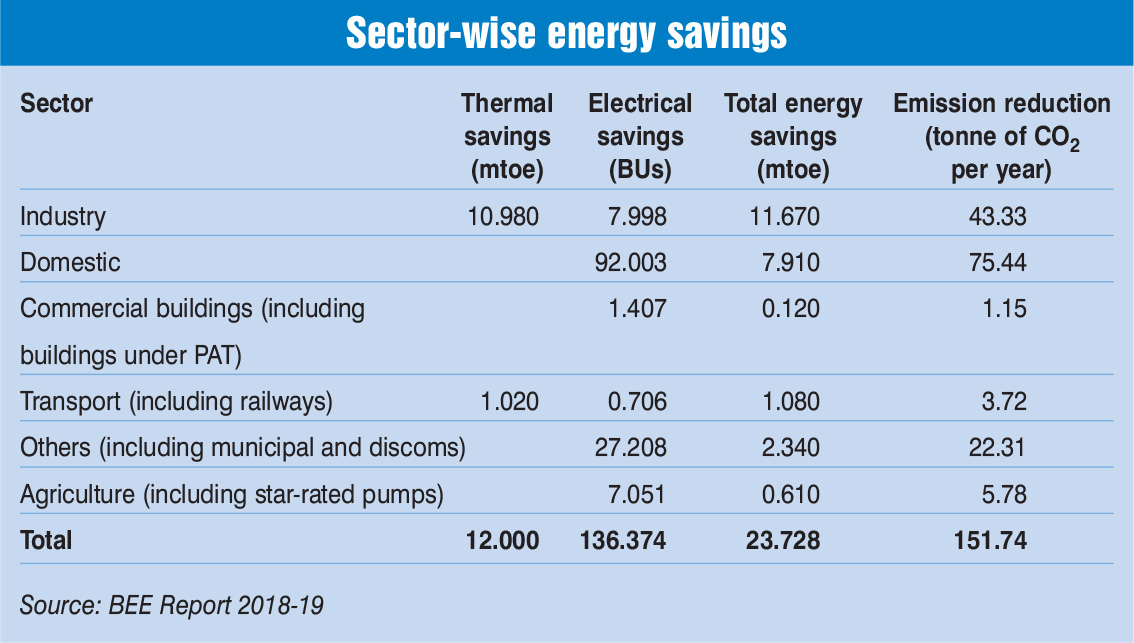 Standards and labelling: The standards and labelling (S&L) scheme was initiated by the BEE for appliances and equipment in 2006. As of 2018-19, there are 10 mandatory appliances and 13 voluntary appliances. This scheme has led to 55.7 BUs of annual energy savings and remains the largest contributor to electrical energy savings. This programme has led to a reduction of 46 mt of CO2 emissions annually.

UJALA: Under the UJALA scheme, EESL is promoting energy efficiency through energy efficient LED lamps, tube lights and fans. This programme has saved over 44.65 BUs and reduced 37 mt of CO2 emissions annually.

Commercial buildings: The Energy Conservation Building Code (ECBC), 2017, for new commercial building construction in India, is estimated to drive a 50 per cent reduction in electricity use by 2030. Till 2018-19, 117 buildings were registered under ECBC, of which 23 buildings are completed and ECBC compliant while 83 buildings are in the design stage. The 23 constructed buildings with a total area of 4.7 million square feet have led to energy savings of 40 MUs. Under the BEE star rating scheme, existing buildings are being labelled as per their actual energy performance indices with 1 to 5 stars.

Till 2018-19, 261 buildings had been labelled under the programme. During 2015-19, 24 offices, 14 BPOs, three hospitals and one shopping mall with energy savings of 82.5 MUs were certified under the star rating programme. Under the building energy efficiency programme (BEEP), implemented by EESL, 6,545 commercial buildings have been covered till 2018-19. This programme led to energy savings of above 110 MUs during 2018-19. 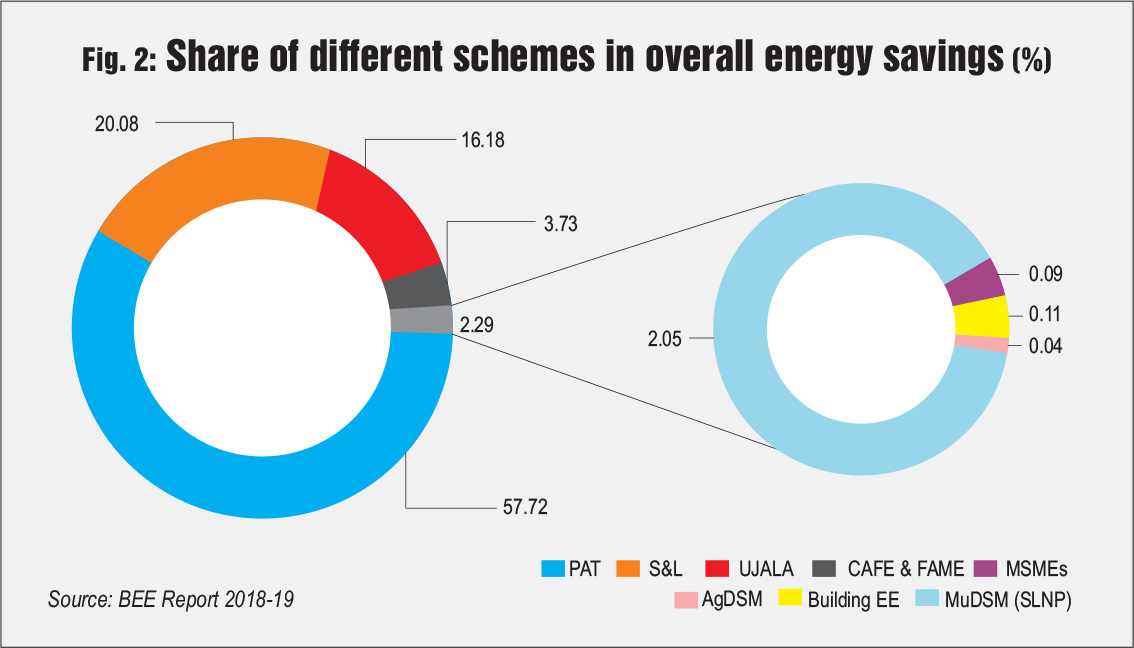 Agriculture: The BEE has made significant efforts towards mandating the use of energy efficient pumps in agriculture by involving state regulatory commissions. Under the agriculture demand-side management (AgDSM) programme, EESL retrofitted BEE star-rated pump sets in Andhra Pradesh, Karnataka and Uttar Pradesh during 2017-19. A total of 63,615 energy efficient star-rated pump sets were installed during the period, which has led to energy savings of 0.11 BU and avoidance of 0.09 mt of CO2 emissions.

Transport: The corporate average fuel economy intervention led to savings of 0.848 mtoe during 2018-19, while FAME I and II, developed to promote electric vehicles (EVs) and EV charging infrastructure, have led to energy savings of 0.06 mtoe and 0.04 mt of CO2 emission reductions during 2018-19.

Municipal: The Street Lighting National Programme (SLNP) is being implemented in 28 states/union territories to replace the conventional street lights with BEE star rated energy efficient street lights with no upfront cost to the urban local bodies. This programme has saved over 5.65 BUs of electricity and has led to avoidance of 4.6 mt of CO2 emissions annually.