Last month, the government unveiled a series of economic measures as part of a mega Rs 20 trillion stimulus package, Atma Nirbhar Abhiyaan, to revive the economy hit by the Covid-19 pandemic. Of the 15 measures announced in the first of the five tranches to tackle the economic disruption owing to the Coronavirus lockdown, which had stretched the finances of power discoms, a key announcement was a Rs 900 billion liquidity injection for discoms.

Under the plan, loans will be extended against state guarantees to clear the liabilities of discoms to gencos. As with earlier power sector reform initiatives, the loans will be given to discoms against specific activities and reforms. The move is being seen as a major positive for power discoms, which have faced a significant decline in cash flows due to the lockdown. The liquidity infusion will resolve the cash flow problems of not just discoms, but also of gencos and transcos to some extent.

A look at the stimulus package announced for the discoms…

The Covid-19 outbreak and the subsequent lockdown have led to a sharp decline in power demand in the months of March and April. This will reflect on the overall demand for  2020-21, which is expected to report a 1 per cent decline for the first time in almost 36 years.

The consumption decline from high tariff paying industrial and commercial consumers during the lockdown has adversely impacted the revenues and cash collections of discoms (30 per cent of discom collections are online, while the bulk 70 per cent are over the counter). As per ICRA’s analysis, the book loss for the discoms at an all-India level is estimated to increase by Rs 200 billion in 2020-21. This would further delay payments from discoms to power generation companies, which are already struggling due to large outstanding payments of more than Rs 920 billion as of February 2020.

Under the intervention, Rural Electrification Corporation (REC) and Power Finance Corporation (PFC) will extend special long-term transition loans up to 10 years to discoms. The loans will be provided to the discoms against guarantees by the state governments. The Ministry of Power has written to all states and union territories to extend the financial package in order to assist the stressed discoms.

The Ministry of Power has also decided to defer fixed charges of central gencos for power not scheduled to the discoms during the lockdown period. These will be repaid without interest in three equal instalments after the lockdown. Further, central power gencos and central transmission companies have been suggested to consider giving a rebate of 20-25 per cent on power supplied (fixed charges) to discoms during the lockdown period. Discoms have been asked to pass on the cost savings to consumers. 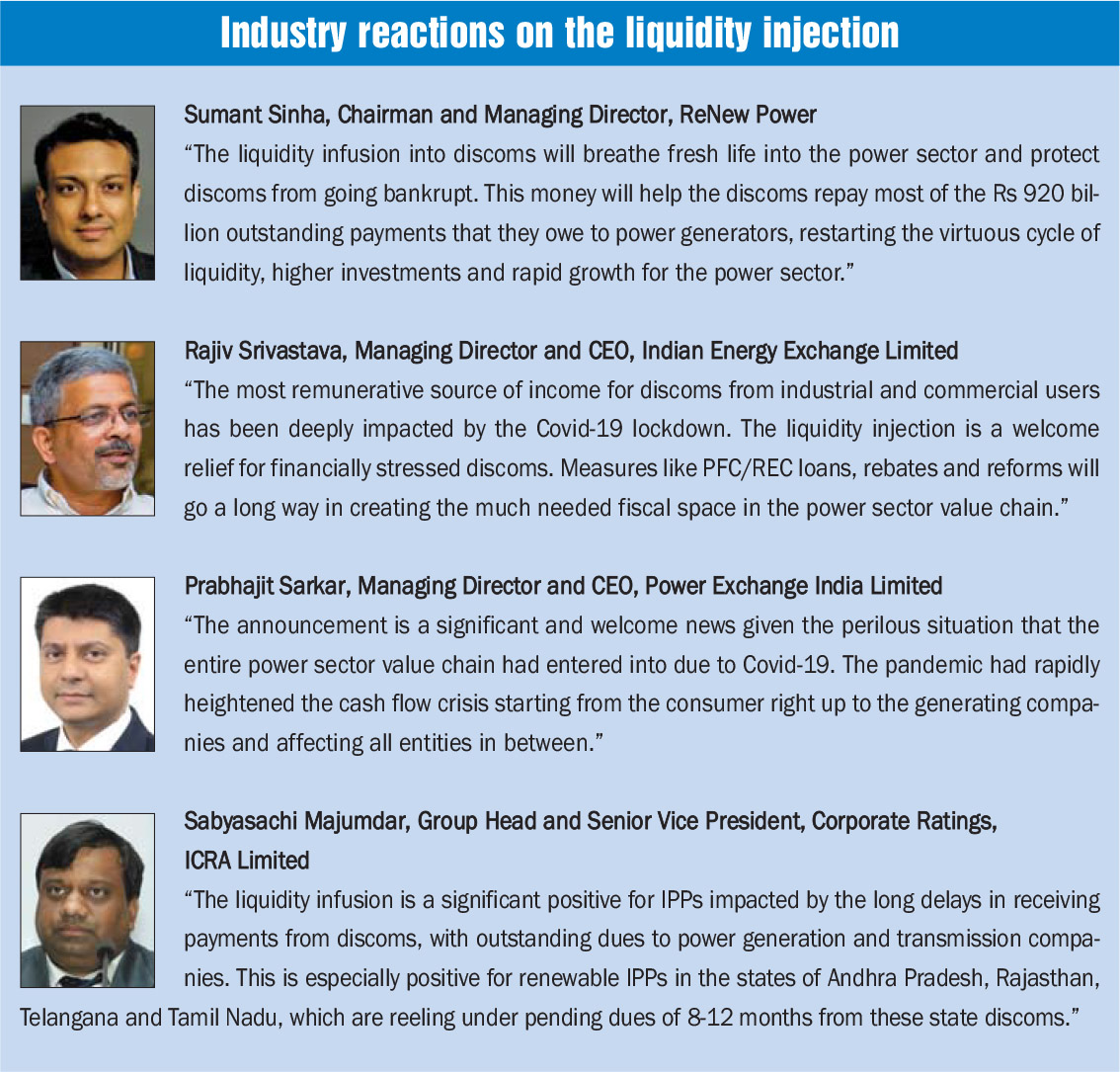 The loans will be extended by PFC and REC to discoms in two tranches, with 50 per cent in each tranche. Accordingly, around Rs 225 billion will be disbursed immediately to discoms under Tranche I. Further, loans to discoms are subject to the implementation of reforms such as liquidation of dues and subsidies by state governments, installation of smart meters, and improvement in operational and financial efficiency.

Long-term transitional loans will be granted with a maximum tenor of 10 years. The principal moratorium will be considered on a case-to-case basis, but in no case a moratorium would exceed three years. The loan amount will be restricted to the outstanding dues of CPSUs, gencos, transcos, IPPs and renewable energy generators. The payment will be directly released to them after considering receivables against electricity bill dues and undisbursed subsidy of discoms from state government departments, companies, ULIBs, PRIs, etc. 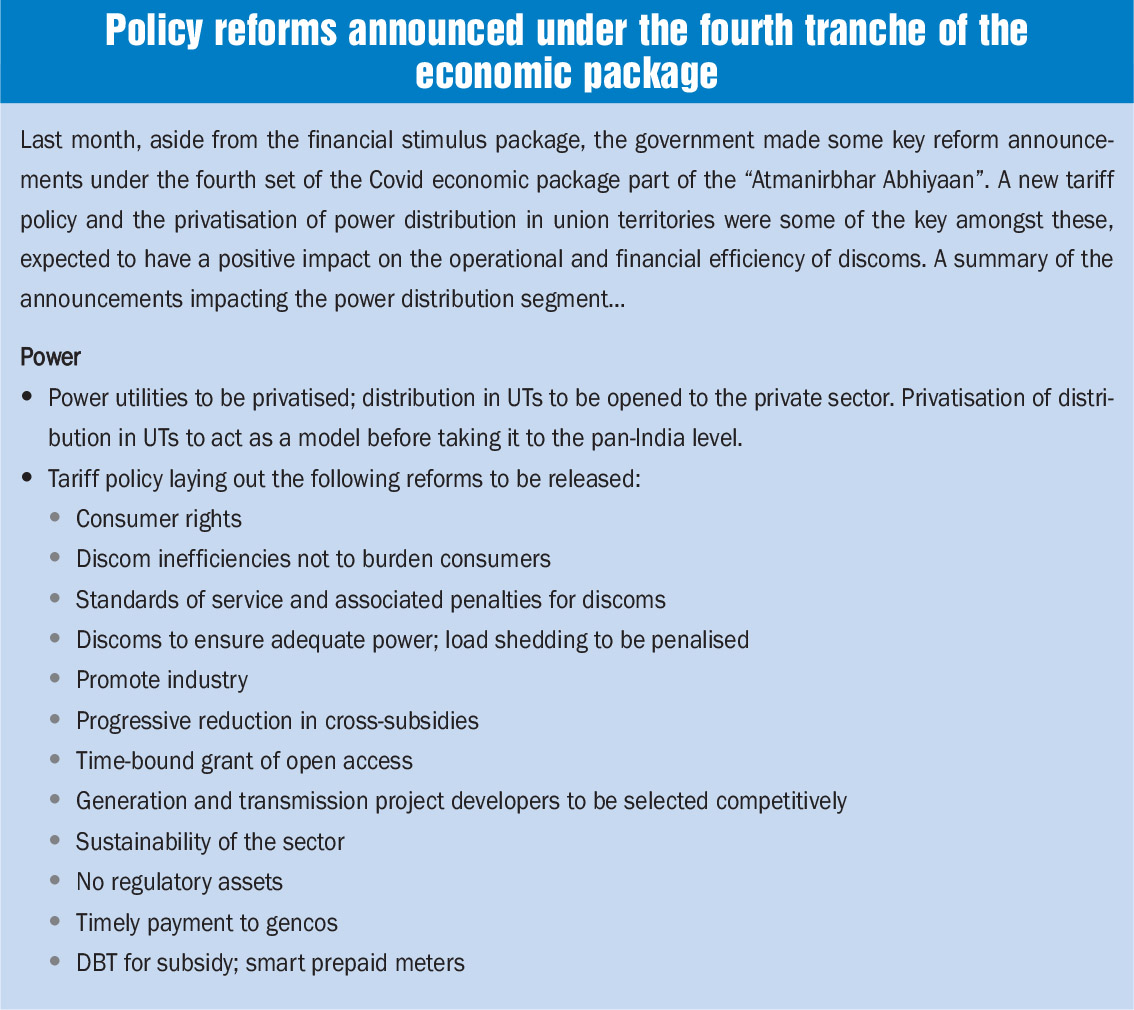 There have been some concerns that the lending operations of the state-run financiers could have an adverse impact on new sanctions and disbursements. However, considering that new lending opportunities are expected to be limited due to the pandemic, PFC believes that the package would have a positive impact on its business. PFC is expecting to maintain its loan asset growth at similar levels as the past year and the package will be a good business opportunity to maintain its loan asset growth. Further, since these loans are state government guarantee-backed and short-term facilities, the incremental lending would attract a lower risk weight. Another concern that equity analysts point out is that the package is negative for the earnings of central PSUs like NTPC, Powergrid and NHPC given that they have to waive fixed charges for the power not drawn by discoms from March 24 till May 17. According to Emkay Global Financial Services, NTPC and Powergrid could see an impact of Rs 9 billion and Rs 11 billion, respectively, on their 2020-21 earnings due to the waiver of fixed charges. This could make their investors anxious and also raise concerns over the government’s right to intervene with fixed regulated returns of the entities. The power minister has, however, clarified that the return on equity of CPSUs is enough to absorb the impact of the measure.

Further, experts doubt that a one-time injection can address the sector’s challenges and thus, more systemic reforms would be needed in the long term. According to a report by the 15th Finance Commission, released in November 2019, “Most states have reduced, to some extent, their aggregate technical and commercial (AT&C) losses and the difference between the average cost of supply and the average rate of return (ACS-ARR) after the implementation of UDAY in 2016-17. However, this progress does not seem to be sustainable unless the systemic issues in the power sector are suitably addressed. In view of the above, robust and systemic reforms are required toimprove the health of the power sector,” noted the report.

The commission recommended incentives for top performing states based on certain broad parameters such as achievement of the AT&C loss reduction targets, reduction in the ACS-ARR gap, open access to trade and industry to meet their power needs from sources other than the state utilities, and implementation of direct cash transfers for all consumers eligible for subsidy in a state. Further, in order to avail of these incentives, the report recommended that the states should ensure that the future supply of electricity from the generating companies should be against a firm irrevocable letter of credit in that particular year.

Overall, the industry has welcomed the liquidity package and hopes that the package will help discoms clear their dues (see Box on industry reactions). As per media reports, the discoms of Maharashtra, Telengana, Andhra Pradesh, Uttar Pradesh, Meghalaya, Jammu & Kashmir, Tamil Nadu, among others have expressed interest in borrowing from PFC and REC. 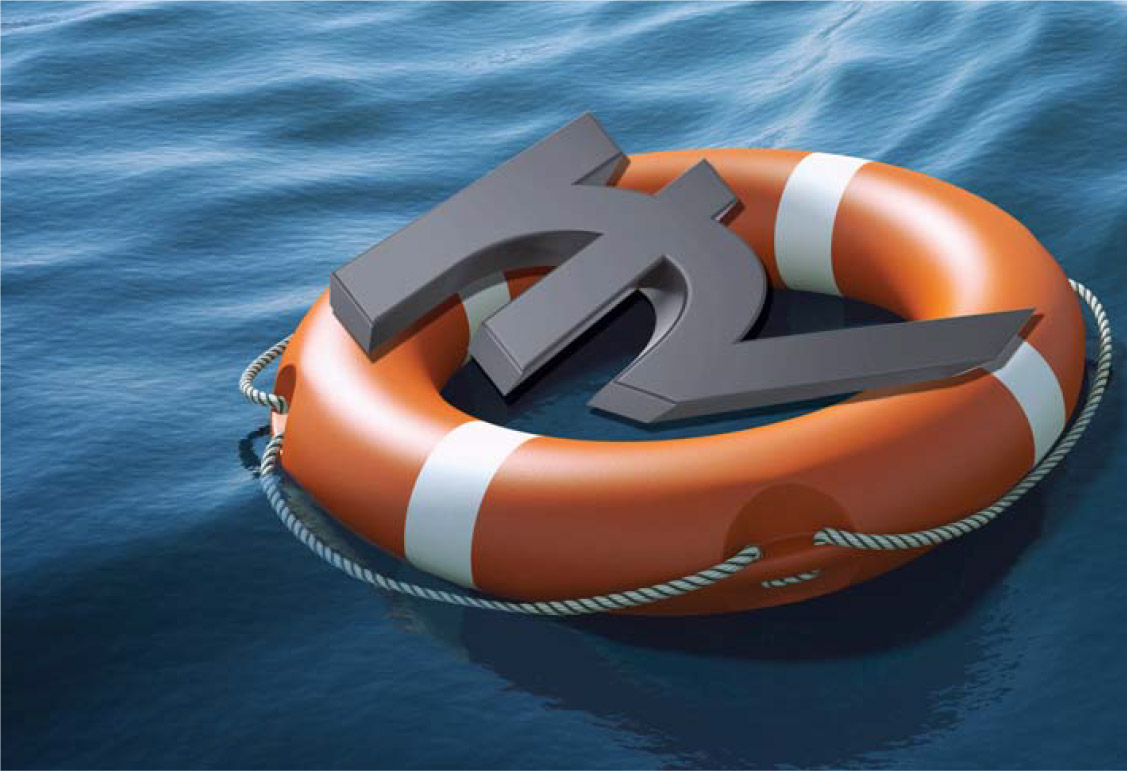 Further, a new scheme is being proposed for the power sector. Recently, post the liquidity injection announcement, in a meeting with the 15th Finance Commission, the power minister proposed a new scheme, which would amalgamate the older schemes, and requested the commission for support of Rs 3 trillion over a five-year period. According to the government, the new scheme will primarily focus on steps for the reduction of losses, separate feeders for agriculture and smart prepaid meters. (To recall, a new scheme, tentatively called ADITYA or the Atal Distribution System Improvement Yojana had been in the works to replace the UDAY scheme with elements such as prepaid smart metering, privatisation of state-run discoms and reduction of tariff gaps.) In the meeting, the minister also said that the borrowing limits of the state governments under the FRBM Act need to be recalibrated to take these liabilities into account to bring to fore the responsibility of the state governments, under which the discoms operate.

Meanwhile, the government is readying a slew of reform measures including a draft electricity amendment bill (which is currently open for stakeholder comments), privatisation of discoms in union territories, a new tariff policy that provides for penalty on unscheduled power cuts, and capping of T&D losses (under the fourth part of the stimulus package).

Net, net, the disruption that the pandemic has created in the power sector is unprecedented and hence, the liquidity injection is timely and should help stimulate recovery. That said, the sector will need to be nimble and ensure that it does not become complacent again, necessitating more bailouts in the future.