Efforts to reduce, recycle and reuse water at TPPs

Water plays a significant role in power generation and is required for process cooling in condensers, ash disposal, removal of heat generated in plant auxiliaries and various other plant consumptive uses. The thermal generation industry is one of the largest consumers of water with a share of around 87.8 per cent in industrial water consumption. The diminishing water supply and pressure from competing water users are areas of concern for power plant owners. In 2015, the Ministry of Environment, Forest and Climate Change (MoEFCC) had notified water consumption norms for thermal power plants (TPPs) in order to minimise the consumption of water and ensure its judicious use in power plants. Besides, the government mandated the use of treated wastewater for all coal-based power plants located within a 50 km radius of a sewage treatment plant (STP).

Water consumption in a TPP

The estimated water use in TPPs is 35,157.4 million cubic metres (mcm) annually. Depending on the quality of water and end-use considerations it can be broadly classified as cooling tower water, and make-up water for compensating the loss due to water evaporation in cooling towers; demineralised water used in boilers for generating steam; ash handling water used during the combustion process; service water, which is used for coal dust suppression, firefighting measures, plantation, toilets and other civic amenities, and potable water. Demineralised water costs more than cooling tower water and its use is limited.

In a power plant, various factors influence its water consumption. The amount of water consumed in a plant depends on power plant technology as well as water characteristics such as the quality of raw water, wastewater programme, type of ash disposal, type of condenser cooling, quality of coal and ash utilisation at a power plant. In view of this, dry cooling systems are being used in power plants instead of wet cooling systems in order to optimise their water consumption. Further, high concentration slurry disposal and dry fly ash disposal systems are being deployed to reduce the water requirements of ash handling plants. 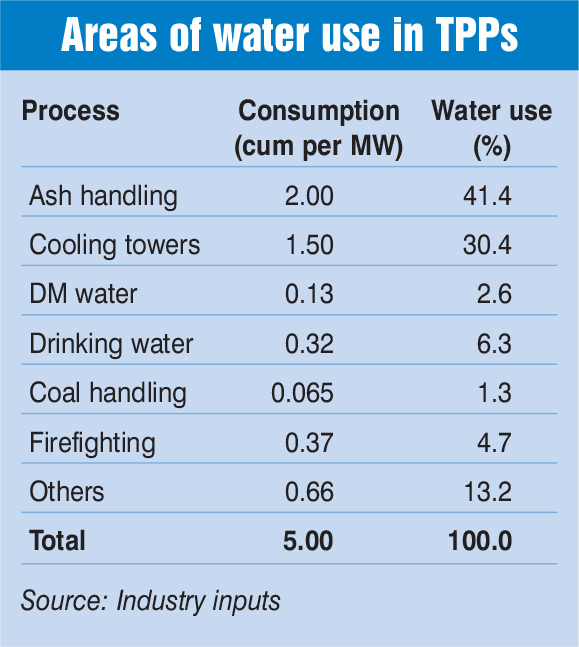 As per the Central Pollution Control Board (CPCB) data on compliance for the April-June 2019 period, of the 183 power stations, only 93 stations have achieved compliance with SWC limits. Directions have been issued to plants with OTC systems to switch to cooling towers by 2022. The state pollution control boards have been asked to take the necessary action against TPPs that do not comply with the SWC limit.

Water shortage is one of the key concerns facing the thermal power generation segment. Excess water consumption leads to excess auxiliary power consumption because water and energy are dependent on each other. Further, an increase in the consumption of auxiliary power deteriorates the power plant efficiency. Thus, efficient and optimal use of water should be made mandatory for the benefit of both the environment and power plants.

While various old plants meet the 3.5 cum per MWh norm, others face layout constraints and retrofitting issues in installing additional treatment systems. Besides, 20-25-year-old plants equipped with OTC water systems often do not have adequate space for the installation of cooling towers. Some of the other challenges faced by developers in reducing water consumption at power plants are the high capital cost for the adoption of dry cooling systems, the high amount of chemical treatment required to increase the concentration cycles in order to lower the make-up water used in cooling towers, additional water required to operate FGDs, and handling of wastewater from FGD units.

Although power production by burning coal is a water-intensive process, it can be optimised by conducting water audits. The domestic water requirement of power plants is unavoidable. Hence, sewage (domestic wastewater) should be treated in the STP itself and repurposed within the plant for other needs. This will help reduce domestic water consumption. Also, the wastewater generated in one system could be reused for other systems/applications. For new plants, pretreatment should be designed to handle secondary treated sewage water.

Net, net, reducing, recycling and reusing water in a power plant would go a long way in optimising water consumption. To this end, new and effective wastewater treatment technologies should be adopted.