India is the second largest producer of cement in the world. At present, the installed capacity of cement in the country is 540 million tonnes per annum (mtpa), with production at 298 mtpa. With the increase in the growth of infrastructure, cement production in India is expected to reach 800 million tonnes (mt) by 2030. However, the Covid-19 pandemic has slowed down this growth and hence these projections might turn out to be too optimistic.

PAT performance of the cement industry

The Bureau of Energy Efficiency’s (BEE) Perform, Achieve, Trade (PAT) Cycle I (2012-15) included 478 units (designated consumers or DCs) from eight energy-intensive sectors, including cement. The minimum annual energy consumption of each DC was 30,000 tonnes of oil equivalent (toe). About 85 cement plants in India were notified as DCs under PAT I. As against a total saving target of 0.815 million toe (mtoe), the sector achieved 1.48 mtoe of energy savings and 4.34 mt of CO2 savings.

Some of the key cement sector energy efficiency impacts from this cycle were the increase of renewable energy share to 13 per cent and power generation through waste heat recovery (WHR) systems increasing from 62.7 MW to 167.95 MW. The capacity utilisation of cement plants during the baseline year was around 90 per cent (except Portland slag cement or PSC plants), whereas during the assessment year it decreased to around 70 per cent. For ordinary Portland cement (OPC), the clinker factor increased by around 1 per cent, while for Portland pozzolana cement (PPC) and PSC, it decreased by around 3 per cent and around 13 per cent respectively. Specific energy consumption (SEC) reduction for PPC was around 9 per cent, for PSC around 19 per cent and for OPC it was 1 per cent, while specific thermal energy consumption reduction for PPC was around 4 per cent and for OPC around 2 per cent. Also, the alternate fuel and raw (AFR) materials  utilisation during the baseline year was 1.4 per cent, and increased to 4 per cent in the assessment year. 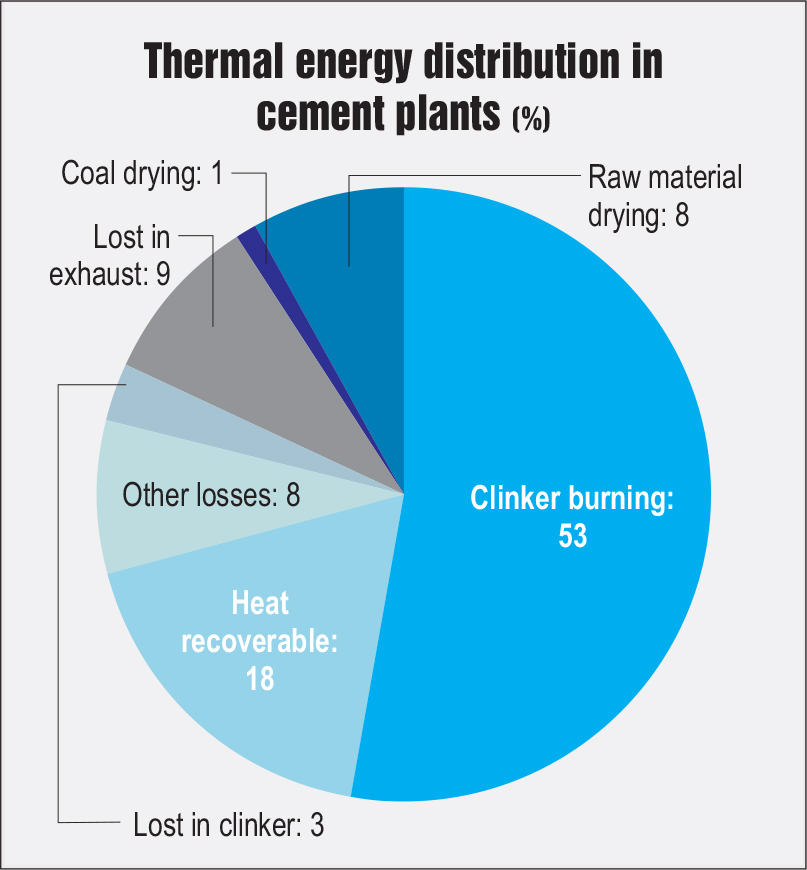 To achieve these targets, the cement sector underwent massive modernisation with state-of-the-art technology. The industry today is comparable to the best in the world in all respects, whether it is the size of the kiln, technology, energy consumption or environment friendliness.

The cement industry contributes to environmental conservation by consuming hazardous wastes such as fly ash (around 30 mt) from thermal power plants and the entire 8 mt of granulated slag produced by steel manufacturing units. The industry also uses AFR with advanced and environment-friendly technologies.

There are mainly two types of cement manufacturing processes – wet and dry. Under the wet process, raw materials are mixed with water so as to ensure better homogenisation, which leads to better quality of clinker. During the whole process, the moisture content in the slurry is 35-50 per cent. This results in higher requirement of heat, and therefore fuel. Hence, in terms of energy consumption, this process consumes more thermal energy.

Under the dry process, raw materials are kept dry by utilising the heat from the raw mill, resulting in poor homogenisation, which leads to inferior quality of clinker. Here, the moisture content in the slurry is 12 per cent, which requires less heat and therefore, less fuel. So, this process consumes less thermal energy. The balancing of quality and quantity of clinker can be on a case-by-case basis.

Energy benchmarking is an effective tool for improving the energy efficiency of any industry. It helps cement plants to analyse the difference in performance as compared to the best performing plants. Benchmarking also identifies industry best practices and best available technologies.

The Confederation of Indian Industry (CII) is helping cement plants through its well-tested Energy Benchmarking Manual. The manual has been recognised as a useful tool for performance assessment, energy efficiency improvement and target setting across the industry to help cement plants achieve the status of world-class units. The CII has conducted its energy benchmarking study in 18 cement plants to date. These plants have realised a total energy saving potential of Rs 1,415.5 million from the 516 energy saving proposals identified during the energy benchmarking studies.

For example, an energy benchmarking study in a cement plant helped in identifying nil investment and medium-term energy saving projects with a saving potential of Rs 69.1 million. The reduction in SEC is shown in the table below. 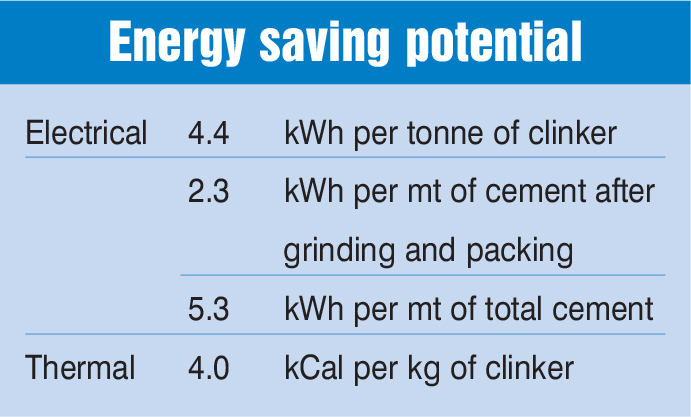 Since the cement industry is expected to grow at a steady rate in the coming years, the increasing cost of power will impact the fuel required to achieve the projected production. Thus, it is imperative for the industry to ensure energy security for sustainable operation.

The huge quantities of waste heat emanating from cement operations, mainly from the preheater and clinker cooler, have substantial potential to generate power, increase efficiency, and reduce the overall electricity bill of a cement plant.

The cement kiln preheater and cooler exhaust generates substantial quantities of waste heat, which is conventionally used for drying raw material and fuel. Flue gases passing through the preheater, after transferring the energy to the incoming raw material in the cyclones, and the flue gas from the cooler, still have some potential heat that can be recovered and used for electricity generation. Although mostly high quality waste heat is being used today, the industry is exploring options for potential utilisation of low quality waste heat. The figure below depicts the typical thermal energy distribution in a cement plant.

The potential of waste heat available for power generation depends on various factors such as installed capacity, moisture in limestone, type/generation of cooler installed, heat available after the utilisation of cooler gas in the cement/ raw/coal mills for drying, and the number of stages of the preheater. The higher the number of stages, the better is the thermal energy consumption and the lower is the WHR potential.

These factors need to be focused on first before considering power generation. For example, moisture content in limestone/coal affects the potential for WHR, as considerable amount of heat is required for the drying of raw material and coal. Since the conversion efficiency from heat to power is low, it is better to explore options for efficient use of heat energy in the process itself, than to consider power generation. The improvement in efficiency of cyclones and coolers means better heat recovery by raw material and less potential for waste heat to be recovered. Change in process conditions, such as excess air resulting from infiltration of air, plays a significant role in the available waste heat.

The cement case study below depicts the WHRS power generation potential for a modern kiln.

Cement plants in India have installed WHR plants of a total capacity of 400 MW (up to PAT Cycle II), with a potential of around 1,200 MW. By generating 400 MW of WHR-based power, around 2.2 mt of coal has been saved. This saving of fossil fuel is the reason these projects were considered under the clean development mechanism (CDM) of the UNFCCC.

WHR offers win-win benefits of reduction in power costs and GHG emissions, improvement in overall cement plant efficiency, water conservation due to complete stoppage of water spray in gas conditioning towers in the cement plant, and a cleaner environment due to less suspended particulate matter load on the cement plant electrostatic precipitator, as most of the dust is collected in the WHR boiler itself.

Given the obvious benefits, the cement industry has been petitioning the government for several regulatory interventions to support WHR-based power generation. For example, a policy (under the proposed Electricity Amendment Bill, 2014) needs to be enacted for WHR-based power generation to be treated as deemed renewable energy and not as fossil fuel-based energy, as it actually helps displace coal. Also, when treated as deemed renewable energy the net WHR-based generation should be permitted for meeting renewable purchase obligations (RPOs) of such plants in all states. This will provide additional incentive to entities to improve their ROI considering the high capital cost. For fiscal incentives, accelerated depreciation (AD) benefits for WHR systems, similar to those for renewable power, should be provided to relieve cement plants from the severe cost and market pressure. Duty-free import of equipment required for latest technologies such as ORC and Kalina cycle for WHR systems should be allowed, as these are more efficient. Fiscal subsidy of 40 per cent of the project cost could be offered for Kalina cycle-based technology, which is yet to be installed in India. These can be treated as demonstration projects for a few installations till the technology is established in India. Hence, amendments may be required in the CERC Regulations, 2010, the IT Act, and the Export Directorate and Customs Department guidelines. 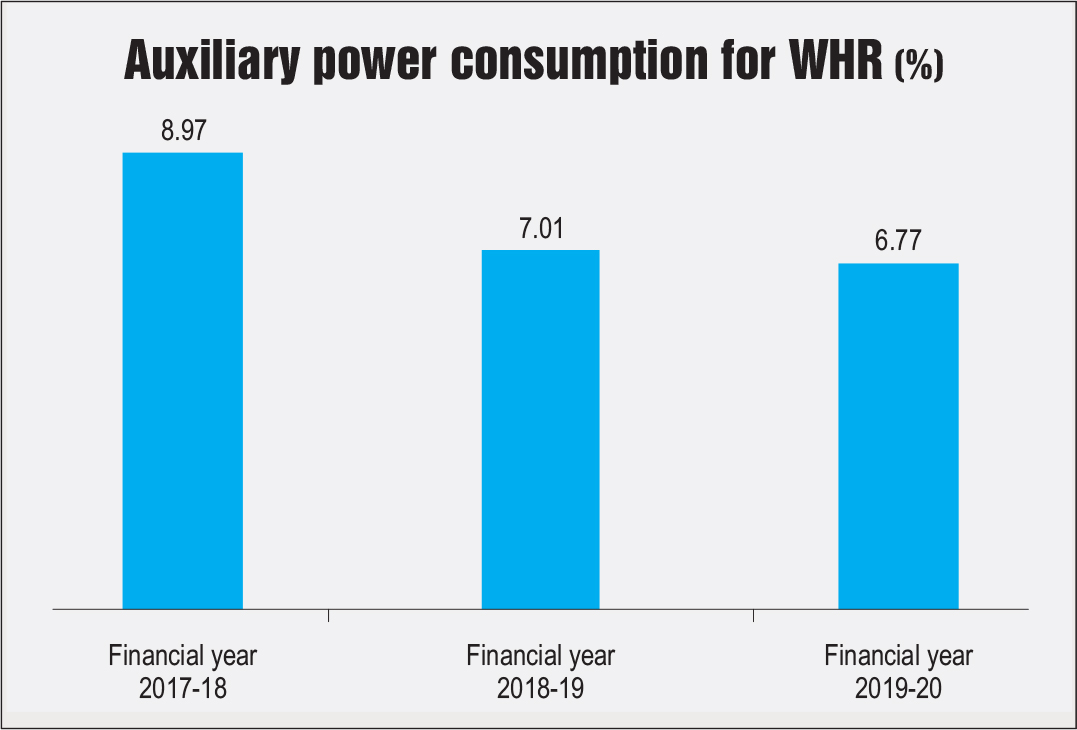 At a leading cement manufacturer’s unit at Rajasthan, Thermax – a 25-year old EPC and O&M partner for power plants in the cement sector, has been providing O&M services since 2008 for its captive power plant of 21 MW capacity and its WHR power plant of 13 MW capacity. The plant installed one 89 tph AFBC boiler and five WHR boilers of 72 tph combined (Thermax make).

Since auxiliary power consumption is one of the key performance indicators for a power plant, the Thermax team took up the challenge. Equipment data was studied and analysed using proprietary analytical tools, and workshops were conducted to identify the key parameters leading to higher auxiliary power consumption in the captive and WHR power plants.

The BEE and UNIDO have jointly created the Facility for Low Carbon Technology Deployment, a five-year programme that aims to promote innovative low-carbon technologies among industrial and other sectors of the Indian economy. The CII is working with the BEE and UNIDO to implement the programme, under which  annual “innovation challenges” are being conducted to identify innovative technologies and solutions to improve efficient end use of energy and reduce greenhouse gas emissions.

WHR is one of the three thematic areas, the other two being space conditioning, and pumps/pumping systems and motors. The shortlisted innovations will benefit from mentoring support by industry experts to develop business/marketing plans and patents, an award and grant up to $50,000 for deployment support and pilot demonstration of winning innovations, and networking with investors and industry for replication and scale-up. Applications are open till May 31, 2020 for the third cycle. 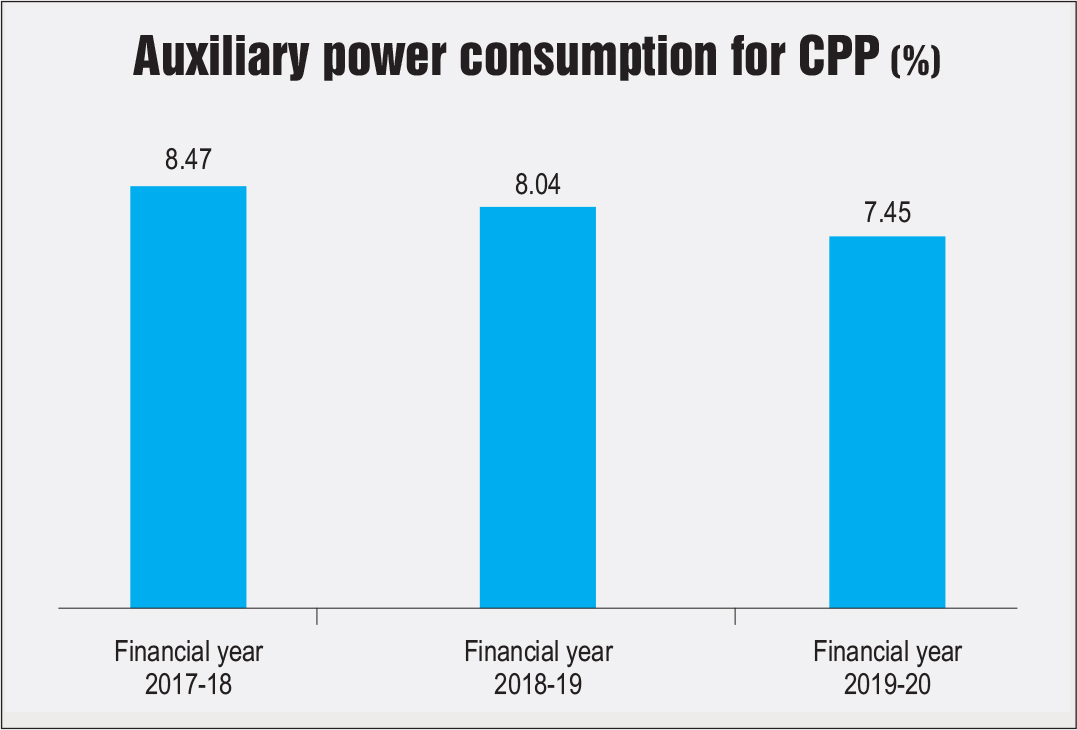 The Indian cement industry is a trendsetter in the world of cement and has been consistent in adopting latest technologies for energy conservation. However, there is still scope for improvement by utilisingenergy efficient technologies and practices in new and old plants. The cement industry’s estimated energy savings (thermal and electrical) under the PAT Scheme till Cycle IV for financial year 2018-19 was 1.630 mtoe, with cost savings of Rs 31.29 billion.

Considering these numbers, besides the cement industry, other key stakeholders such as the government and their agencies, the Cement Manufacturing Association, institutes such as the CII, TERI and FICCI, and international organisations such as GIZ, need to work with financial institutions to facilitate low-cost finance for such energy efficiency initiatives. Other options such as BOOT (build-own-operate-transfer) and BOO are also available with various technology providers, and through special purpose vehicles between them and the lenders. These options  should be well publicised.

Even with all the benefits mentioned above, there are several implementation challenges. For example, very few states have permitted the use of WHR-based power to offset their non-solar RPOs. Another important challenge is the revenue lost whenever a kiln shuts down for around 20-30 days for maintenance or repair. The current pandemic too has affected the cement supply markets. Therefore, continued policy and capacity building support provided by the government and other agencies would benefit project developers and the cement industry in the long run.