The transmission segment in India has seen considerable growth in the past few years owing to increasing power demand as well as generation capacity addition. The need to evacuate large-scale renewable energy is further driving the demand for transmission network expansion. With a target to set up 175 GW of renewables by 2022 and 450 GW by 2030, the Indian transmission system will require significant augmentation and strengthening. To deal with the challenges posed by the greater integration of variable renewable energy into the grid, utilities are increasingly adopting technologies such as high voltage direct current (HVDC), flexible AC transmission systems (FACTS), digital substations, phasor measurement units (PMUs) and static synchronous compensators (STATCOMs).

Private participation in interstate transmission continues to grow with private players securing 35 out of 50 projects awarded so far (April 2020) under tariff-based competitive bidding (TBCB). Power Grid Corporation of India Limited (Powergrid), the leading state-owned transmission company, secured the remaining. Some of the key private players in transmission include Sterlite Power Transmission Limited, which has a portfolio of 15 TBCB projects, Adani Transmission Limited (11 projects), EsselInfraprojects Limited (four projects) and Kalpataru Power Transmission Limited (two projects). At the intra-state level too, state utilities are gradually coming forward to award transmission projects through competitive bidding. Uttar Pradesh and Maharashtra have awarded transmission projects to ATL on a TBCB basis in recent years. Jharkhand is also in the process of awarding projects through the TBCB mode. Meanwhile, the Assam and Bihar transcos have approached the SERCs to determine the minimum threshold cost of projects that can be awarded through TBCB. 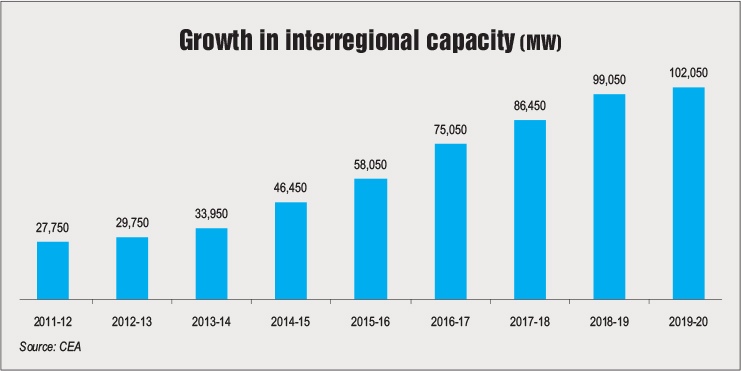 In February 2020, India achieved a significant milestone in its renewable energy journey with the commissioning of 11 renewable energy management centres (REMCs). The REMCs allow centralised forecasting and monitoring of renewable energy generation, which is crucial for its integration into the grid. The REMCs have been developed by Powergrid under the central government’s flagship Green Energy Corridors (GEC) I scheme. The REMCs are equipped with artificial intelligence-based renewable energy forecasting and scheduling tools, which provide better visualisation and situational awareness to grid operators. Currently, 55 GW of solar and wind power capacity is being monitored through these 11 REMCs.

HVDC is another technology focus area for the country as it helps transmit electricity over long distances with minimum losses. In 2019-20, Powergrid commissioned two 1,500 MW HVDC stations of the Champa-Kurukshetra UHVDC project, taking the total project capacity to 6,000 MW. Powergrid is also setting up an HVDC bipole link between the western region (Raigarh, Chhattisgarh) and the southern region (Pugalur, Tamil Nadu) at an estimated cost of Rs 147.33 billion. The objective is to improve the import capability of the southern region. The power will be transferred over an ±800 kV, 6,000 MW HVDC link with terminals at Raigarh and Pugalur, along with a VSC-based 2,000 MW HVDC link between Pugalur and north Trichur (Kerala).

Utilities are also installing capacitor banks and STATCOMs for reactive power management and improvement of the voltage profile. For instance, GETCO commissioned a 120 MVAr STATCOM at the Timbdi 220/132/66/11 kV substation to mitigate voltage variation, thereby facilitating the smooth integration of renewable energy into the state grid. Similarly, gas-insulated switchgear (GIS) substations are of high interest to utilities owing to their space saving benefits. In fact, Sterlite Power is now installing vertical GIS substations at its Gurgaon-Palwal transmission project, which is likely to be completed soon. A vertical GIS substation is a unique concept and the first one in India. The technology further reduces the land requirement of substations.

Another key trend is the increasing use of technology in transmission project construction and operations owing to time and space constraints. Project developers are deploying LiDAR technology, drones and air cranes for the construction of transmission lines, and thermovision cameras and android-based applications for operations and maintenance. Sterlite Power has deployed a drone-based conductor stringing solution to accelerate the development of transmission infrastructure. The solution optimises the conductor stringing process by 30 per cent and minimises the adverse impact on the environment. 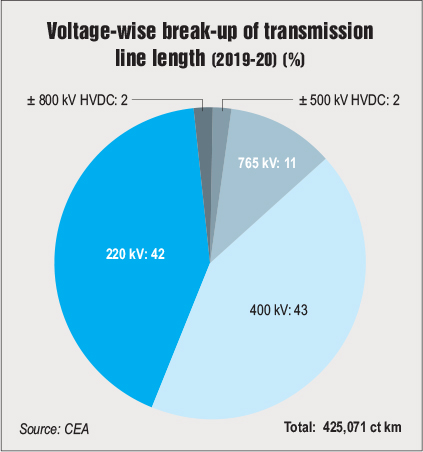 The immediate challenge to all sectors including transmission is posed by the Covid-19 crisis. Owing to the lockdown, most under-construction transmission line and substation projects have come to a standstill. Several private transmission project developers have evoked the force majeure clause in their contracts and intimated the same to long-term transmission customers. Transcos are expected to prioritise the completion of works in progress as the lockdown is lifted. However, the mobilisation of men and materials is expected to take some time.

In addition, the lockdown has affected the timely payment of transmission charges by discoms to transcos as the former battle liquidity issues caused by low demand and no revenue from industrial and commercial consumers. Further, with weak electricity demand and abundant power generation capacity, system operators need to effectively balance demand and supply in real time to prevent potential blackouts. Though the Indian grid is resilient, which was recently demonstrated by the successful management of the 9-minute lights-off event on April 5, 2020, it needs to be further strengthened to cope with the growing integration of renewables.

The capacity addition and capex in the transmission segment may suffer in the short term but the long-term drivers remain intact. As per the National Infrastructure Pipeline, a capex of over Rs 3,040 billion is expected in the transmission segment between 2020 and 2025. The state sector would account for a major share (62 per cent) in the total capex followed by Powergrid (21.5 per cent) and the private sector (15.8 per cent). There is a strong pipeline of transmission projects at over 86,000 ckt. km of lines and about 314,875 MVA of substation capacity under development.

The majority of the upcoming capacity is coming under the GEC I and II schemes. Another scheme for renewable energy zones (REZs) is under way to evacuate 66.5 GW of renewable energy capacity (50 GW solar and 16.5 GW wind) at an estimated cost of Rs 432 billion. The REZ scheme will be implemented in a phased manner, with the first phase entailing the creation of transmission infrastructure for 28 GW of renewable energy capacity with an investment of Rs 168 billion and the second phase entailing the creation of evacuation infrastructure for 38.5 GW at Rs 264 billion. Under the first phase, transmission lines will initially come up in Gujarat and Rajasthan, and the remaining will be finalised after the receipt of long-term access applications.

Net, net, the outlook for the transmission segment is positive in the coming years.