The wind power segment is facing subdued capacity addition, primarily owing to transmission and land issues, which have severely constrained the wind power ecosystem. Uncertainties regarding the sanctity of contracts and the issue of non-payment by discoms have also added to the challenges faced by developers. Although significant wind power capacity has been auctioned since the introduction of competitive bidding in the segment in 2017, the gap between the capacity auctioned and executed has been widening. On the tariff front, as developers internalised various risk factors, wind power tariffs have stabilised at Rs 2.80 per kWh in recent auctions, which had fallen to as low as Rs 2.43 per kWh in the past.

As of July 2020, the country’s installed wind power capacity stood at 37,940 MW, which is about 10 per cent of the total installed capacity. The net capacity addition in the segment stood at 2.07 MW during 2019-20, which is significantly lower than the capacity of 3.3 GW and 5.5 GW installed in 2015-16 and 2016-17 respectively. This is in spite of the fact that 11.4 GW of new capacity has been auctioned by the Solar Energy Corporation of India (SECI) along with 2 GW by NTPC Limited and 1.5 GW by Gujarat and Maharashtra since the introduction of competitive bidding in 2017.

In June 2020, the Ministry of New and Renewable Energy (MNRE) issued guidelines for tariff-based competitive bidding for 2.5 GW of interstate transmission system-connected wind projects blended with solar power. SECI is the nodal agency for implementing the scheme. As per the guidelines, wind and solar projects may be located at the same site or nearby, but the individual wind and solar components of the project need to inject power into the grid at a single point. The minimum capacity that a developer can bid for is 50 MW. Further, the rated power capacity of the wind project should not be less than 80 per cent of the total contracted capacity, blended with 20 per cent of solar power. Under the scheme, in August 2020, SECI allotted 970 MW of blended wind projects. Vena Energy Vidhyuth Private Limited has won 160 MW of projects, quoting the lowest tariff of Rs 2.99 per kWh, while JSW Solar was awarded 810 MW at Rs 3 per unit. Going forward, tenders for blended wind are likely to become more common with increasing energy storage and hybrid solutions.

The introduction of competitive bidding in the wind energy segment in 2017 has led to plummeting of the wind energy tariff to as low as Rs 2.43 per kWh discovered under SECI Tranches III and IV. However, the wind power tariff moved up to stabilise at Rs 2.80 per kWh in the recent auctions as developers internalised various risk factors.

Among the wind energy auctions undertaken in 2019, while SECI’s Tranche VI auction in February 2019 for 1.2 GW of capacity was oversubscribed by 1,125 MW, both of its later auctions, Tranche VII in May 2019 and Tranche VIII in August 2019, were significantly undersubscribed. In Tranche VI, Ostro Energy, Adani Renewables, Srijan Energy Systems and Powerica Limited have quoted Rs 2.82 per unit, while SB Energy and Ecoren Energy have quoted a tariff of Rs 2.83 per unit to emerge as winners. Under Tranche VII, only 480 MW of wind power capacity has been allocated, as against the tendered 1.8 GW, to Engie, ReNew Power, Sprng Energy and Adani at Rs 2.79 per unit, Rs 2.81 per unit, Rs 2.82 per unit and Rs 2.83 per unit, respectively. Similarly, under Tranche VIII, only 439.8 MW has been allocated to CLP India and Avikaran Energy (Enel) at Rs 2.83 per unit and Rs 2.84 per unit respectively. Gujarat Urja Vikas Nigam Limited’s auction for 1 GW of wind power capacity in May 2019 has also been undersubscribed by 69 MW and witnessed the lowest tariff of Rs 2.80 per unit.

The MNRE has set offshore wind energy targets of 5 GW by 2022 and 30 GW by 2030. The ministry has also invited expressions of interest for the first 1 GW offshore wind project in the Gulf of Khambat (Gujarat). However, the tender for the project has been delayed and attention has now turned to the stronger wind resource area off the Tamil Nadu coast.

India has an offshore wind energy potential of around 70 GW along the Gujarat and Tamil Nadu coasts. However, the initial cost of power generation from offshore wind power plants and the resultant tariffs are expected to be much higher than those of the mainstream renewable energy technologies. These factors hamper the development of offshore wind projects in the country. A recent report by the Global Wind Energy Council has suggested that proper planning of offshore wind tenders, along with demonstration-scale projects, would enable India to achieve its targets. The report has also noted that India’s offshore wind generation has to compete with cheaper land-based renewables, which has curbed the growth in this market segment. 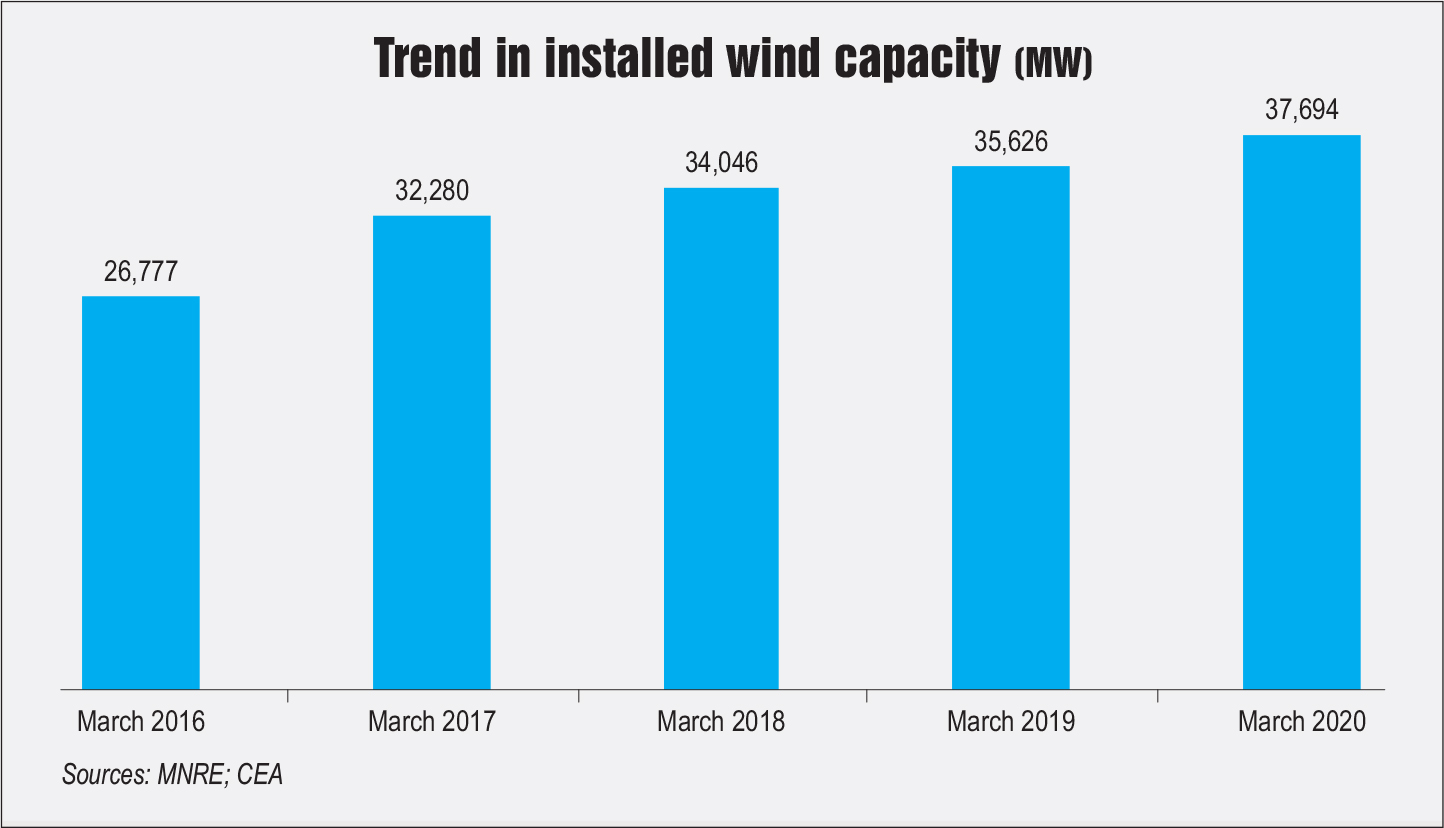 The development of wind power in the country has been hampered by a host of challenges. With the increasing unavailability of wind resource-rich sites and rising land costs, the land acquisition issue has magnified, causing delays in project commissioning. Besides, delays in obtaining environmental clearances and getting right of way for last-mile connectivity to the nearest substation have added to these challenges. Developers also face delays in obtaining regulatory clearances. Often, this forces them to withdraw from the tender because of the unavailability of long-term loans from banks in the absence of proper regulatory clearances.

Another challenge hampering the development of wind power in the country is the lack of adequate transmission capacity. Wind projects are usually commissioned within 18 months, while transmission systems typically take 24-36 months for implementation. Even the green energy corridors project, aiming at the grid integration of solar and wind power, has not been implemented at the desired pace. Another issue pertaining to wind power projects is the lack of contract sanctity in various states, which has put to risk a large quantum of investments made in this segment. A case in point is Andhra Pradesh, where the government has announced its decision to review and renegotiate power purchase agreements signed during the previous government’s regime under the feed-in tariff mechanism. This decision has put at risk of default nearly Rs 210 billion of debt of renewable energy companies, as about 5.2 GW of renewable capacity, including nearly 3.9 GW of wind capacity, has been jeopardised.

On the wind power equipment front, the manufacturers often face a build-up of stock inventory due to delays in project execution. Besides, since wind tariffs have declined considerably and developer revenues have taken a hit, manufacturers have to keep equipment prices low in order to stay competitive.

On the capacity addition front, the Covid-19 crisis seems to have added to the existing challenges, leading to delays in project commissioning in the wind power segment. Nearly 1.8 GW of projects scheduled for the first half of 2020 or already under construction are now expected to be delayed. Another 0.7 GW-1.1 GW of wind projects, with commissioning dates in the last quarter of 2020, are expected to move to 2021. Besides, a number of high-risk projects are likely to be dropped from the existing pipeline.

To conclude, while the development of wind power capacity in the country has taken a hit because of many challenges faced by the segment, the government has been implementing measures to address these concerns.  In a positive development for the wind power developers, in March 2020, the MNRE announced that upper ceiling tariffs or tariff caps will no longer be prescribed in future bids for renewable energy projects. Meanwhile, in July 2019, MNRE had revised the bidding guidelines for wind projects, allowing developers 18 months’ time to sort out land clearances. Further, to address transmission issues, MNRE has submitted a transmission plan for 66 GW of additional renewable energy capacity across solar and wind regions to the power ministry, and work has already been started on some projects by Power Grid Corporation of India Limited. Apart from this, for continued growth of the segment, it is imperative that discoms’ health improves so that they can pay developers on time as the majority of power procurement is done by discoms. Also, maintaining the sanctity of contracts is of paramount importance for the segment.