Solar power is the fastest growing segment in the Indian power sector. The country’s solar power capacity has grown from a meagre 6,763 MW to 34,628 MW in a span of just five years between 2015-16 and 2019-20, recording an impressive compound annual growth rate (CAGR) of 50 per cent. Attracted by the immense solar potential and realising the benefits of clean renewable energy, the Indian government has set a target of 100 GW of solar capacity by 2022.

With the increase in solar power capacity additions, solar generation has increased year on year from a meagre 7,447 MUs in 2015-16 to 50,104 MUs in 2019-20. Solar power generation has grown at a CAGR of 61 per cent during this period. Solar power has a share of 37 per cent in India’s total renewable energy mix, second only to wind power, which is an older and a more mature industry. Its share in the total installed capacity stands at about 9.5 per cent as of July 2020.

The year 2020 has proved to be extremely challenging for all sectors, including solar, in view of the coronavirus outbreak and the subsequent lockdown. Construction activities have been halted, practically  stranding investments, which are incurring incremental running costs. Taking cognisance of the situation, the Ministry of New and Renewable Energy (MNRE) declared Covid-19 as a force majeure event and announced a blanket extension of 30 days for the commissioning of renewable energy projects beyond the lockdown period in March 2020. The MNRE further mandated all discoms to buy electricity from renewable projects irrespective of the costs.

Though the construction of renewable power projects has been permitted, many under-construction project sites were completely shut down for two to three months due to manpower and equipment unavailability during the lockdown period. Projects that are under construction will most likely be delayed by three months due to the lockdown and halting of construction activities in many areas. For projects where power purchase agreements (PPAs) have been signed recently, financial closure timelines and handover of land from solar park implementation agencies to developers will be delayed. Even after the lockdown ends, projects are likely to face delays as supply chains have been disrupted and imports have been halted, and it is going to take some time to mobilise labour and equipment and get them to various sites. Moreover, due to the coronavirus outbreak and the closure of government offices, many approvals are also stuck. Developers of solar projects in India are concerned about project delays due to the initial slowdown of manufacturing in China followed by the lockdown in India. According to CRISIL, about 3 GW of solar projects, entailing an investment of about Rs 160 billion, will be affected.

Recently, the Ministry of Power (MoP) has extended the waiver on interstate transmission system (ISTS) charges and losses to all solar and wind energy projects commissioned before June 30, 2023. The previous deadline for the same was December 31, 2022.

Despite a challenging business environment, the government has no plans to slash its target of achieving 175 GW of renewable energy capacity in the country by 2022 in the wake of the Covid-19 outbreak and the nationwide lockdown. A few bid extensions have been witnessed, but solar power auctions have been receiving a good response.

From March 2019 to June 2020, solar tariffs for utility-scale projects have been discovered in the range of Rs 2.36 per kWh-Rs 3.17 per kWh. The lowest tariff of Rs 2.36 per kWh was discovered in the Solar Energy Corporation of India’s (SECI) bid for 2 GW of ISTS-connected solar projects (Tranche IX), the results of which were announced in June 2020. The lowest tariff was quoted by Spanish developer Solarpack Corporacion Tecnologica SA, Avikaran Surya India Private Limited (Enel Green Power), Amp Energy Green Private Limited, Eden Renewables while ib vogt Singapore Private Limited quoted the second lowest tariff of Rs 2.37 per kWh. Notably, the  majority of the winners in the auction are foreign companies, demonstrating global interest in India’s solar story. Also, the L1 (lowest) tariff, quoted by Solarpack is about 3.3 per cent lower than the previous lowest quoted tariff of Rs 2.44 per kWh in the country. 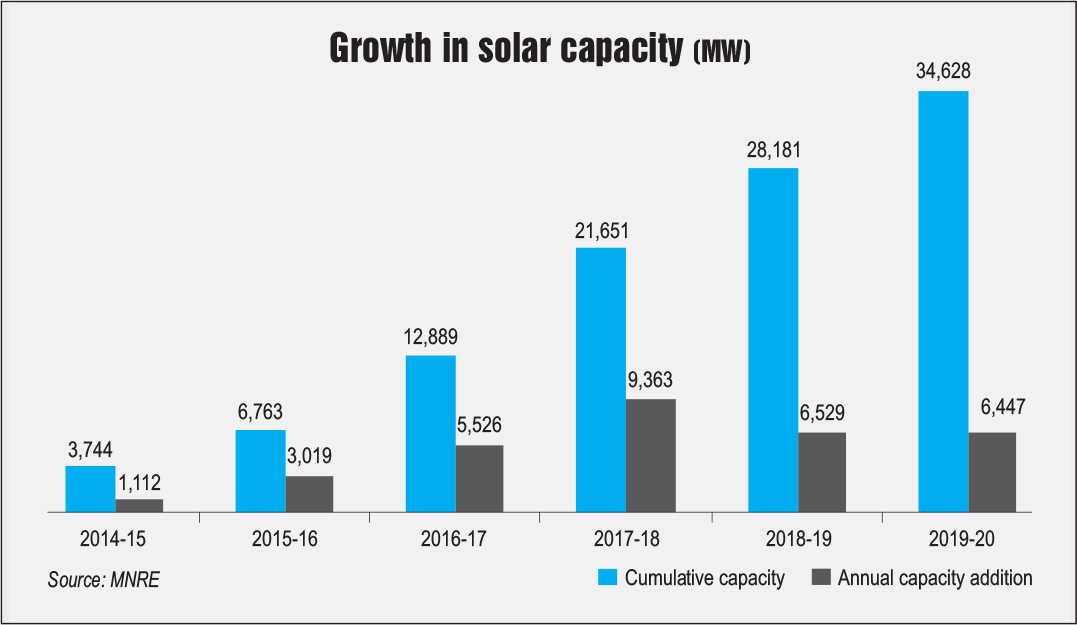 NTPC Limited’s tender for setting up 1.2 GW of ISTS-connected solar projects has also received a good response from developers. The tender has been oversubscribed by 500 MW with bids from ReNew Power, Tata Power, O2 Power, Sungrow, Azure Power and AMP Solar. The tender was floated in February 2020 and had a bid submission deadline of July 15, 2020. In August 2020, Vena Energy and JSW Solar emerged winners as in SECI’s 2.5 GW auction for ISTS-connected wind-solar hybrid projects. 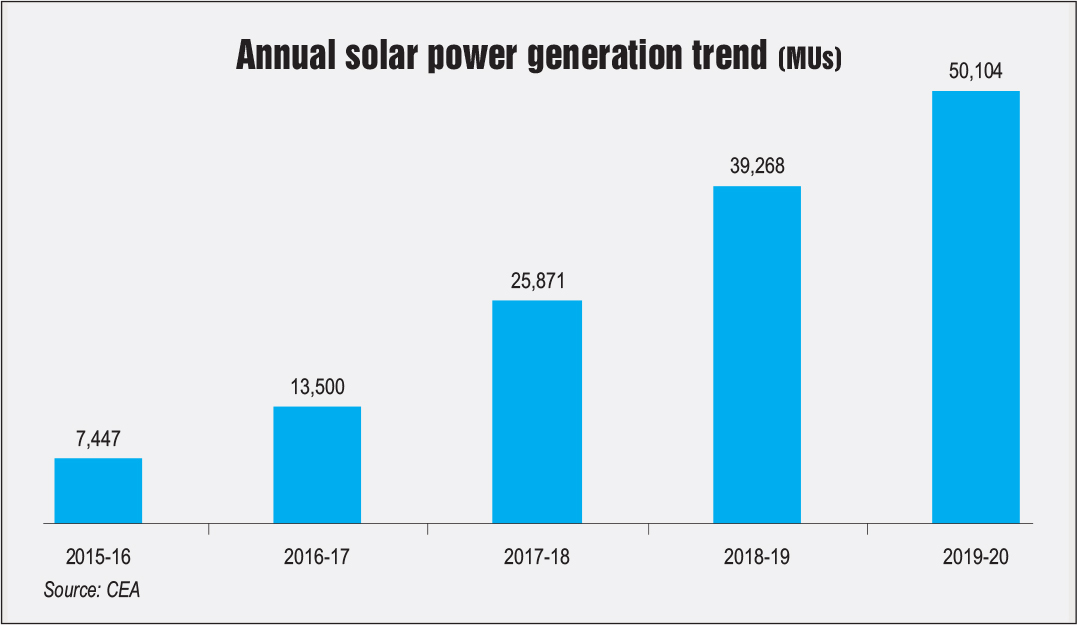 SECI is also focusing on development-linked manufacturing, which is in line with the government’s plan to revive the ailing solar manufacturing industry in the country. In 2019, it had launched the 7 GW ISTS-solar linked with 2 GW solar module manufacturing tender. Adani Green Energy and Azure Power emerged as winners in this tender, with each winning bids to develop 2,000 MW of projects with 500 MW of manufacturing capacity. The winning tariff quoted by both companies was Rs 2.92 per kWh. The tender also had a greenshoe option, where the companies could opt for an additional capacity to both develop and manufacture. Under this, Adani Green Energy has won an additional capacity of 1,500 MW of module and cell manufacturing and 6 GW of project capacity and Azure Power won 500 MW of manufacturing and 2 GW of solar project capacity. Adani Green Energy has planned an investment of Rs 450 billion for developing the capacity secured under the tender.  As per SECI, another tranche manufacturing-linked tender will come up by 2022, while three other tranches will come up in 2023, 2024 and 2025. Since it is a big tender, SECI is already in talks with various discoms for PPAs. It expects to complete signing of the PPAs within three months and simultaneously, the developers will start the manufacturing activity.

The trend of bundling renewable energy with thermal power is also gaining traction in order to address the issues of intermittency of variable solar and wind energy and low capacity utilisation of the transmission infrastructure. Recently, in July 2020, the MoP has issued guidelines for the procurement of round-the-clock (RTC) power from grid-connected renewable projects complemented with power from thermal power projects. As per the guidelines, the generator shall supply despatchable renewable energy complemented with thermal power, in RTC manner, keeping at least 85 per cent availability annually and also at least 85 per cent availability during peak hours. In May 2020, the country’s first tender for providing RTC solar power discovered the lowest tariff of Rs 2.90 per kWh. ReNew Power was the successful bidder for the entire 400 MW capacity.

Earlier, in February 2020, SECI concluded the world’s largest RW plus storage tender for 1.2 GW capacity. In this tender, the renewable technology can be either solar, wind or a hybrid system, and storage can include battery energy storage systems, pumped storage systems, mechanical and chemical systems, or combinations thereof. Greenko won 900 MW capacity at a highly attractive weighted average tariff of Rs 4.04 per kWh and ReNew Power was awarded 300 MW at a weighted average tariff of Rs 4.30 per kWh. Greenko is opting for pumped hydro storage, while ReNew is planning for battery energy storage system.

The central government’s crackdown on power equipment imports from China is an area of concern for developers, especially as India imports about 80 per cent of its solar cells and modules from China, along with other equipment such as inverters, prefabricated structures and raw materials. Though the government is focusing on expanding domestic manufacturing, setting up of the facilities will take some time. Also, the central government has plans to impose a 20 per cent basic customs duty (BCD) on solar modules, solar cells and solar inverters from August 2020, with a view to discouraging imports from China. The Solar Power Developers Association recommends that the imposition of BCD be postponed by 18 months so that the financial burden on already bid out projects of a capacity around 50 GWs can be avoided. Other issues faced by solar power developers pertain to payment delays by discoms, limited contract sanctity, land acquisition issues and delays in the completion of transmission projects.

However, these issues are likely to be resolved as the government’s support to the solar segment continues on priority. The segment has a promising future considering the competitive advantage that it has attained vis-à-vis all other sources of energy and the benefits it offers in meeting energy demand in an environment-friendly manner.