The power distribution segment continues to be the weakest link in the power sector. High aggregate technical and commercial (AT&C) losses, poor billing and collection efficiency and delays in tariff hikes have significantly deteriorated the operational and financial performance of the distribution utilities over the years. The discoms, which were already reeling under heavy losses, have been severely impacted by the outbreak of the Covid-19 pandemic and the subsequent lockdown. A deep cut in power demand from high-tariff-paying commercial and industrial (C&I) consumers has further widened the discoms’ revenue gap. As relief measures for the sector, the government has announced a Rs 900 billion liquidity infusion scheme for discoms under the Atmanirbhar Abhiyan, and has announced the privatisation of power distribution in the union territories (UTs) and the installation of smart prepaid meters.

As per India Infrastructure Research, between 2014-15 and 2018-19, the total distribution line length grew at a compound annual growth rate (CAGR) of 4.11 per cent to reach 11.12 million ckt. km as of March 2019. The majority of the distribution line length (around 57 per cent) is at the low tension level, followed by 39 per cent at the 11 kV level and the remaining at the 33 kV level. As of March 2019, nearly 816 GVA of transformer capacity was operational at the 33 kV level or below, across 50 utilities in the country. This increased at a CAGR of 7.57 per cent from 2014-15 to 2018-19. The total electricity consumers stood at around 278 million as of March 2019, with the domestic category accounting for the largest share of consumers at nearly 79 per cent of the total consumers.

On the energy sales front, in 2018-19, the distribution utilities recorded total sales of 957.51 BUs, registering a year-on-year growth of 7.45 per cent. State-wise, Maharashtra accounted for the highest share in the gross energy sales at 11.65 per cent, followed by Uttar Pradesh at 9.2 per cent. Consumer category-wise, industrial consumers accounted for 29 per cent of the total sales during 2018-19, followed by domestic (28.01 per cent), agricultural (22.44 per cent) and commercial (9 per cent) consumers.

On the billing efficiency front, there was an improvement from 82.69 per cent in 2017-18 to 83.42 per cent in 2018-19. However, the collection efficiency deteriorated from 93.93 per cent to 93.49 per cent during the same period. With the outbreak of Covid-19 and the imposition of social distancing norms, discoms have not been able to physically collect electricity bills from consumers, leading to a dip in the cash flow. During this time, the smart metering infrastructure, which enables remote meter reading, has come as a major relief. The discoms with smart meters have recorded around 95 per cent billing efficiency and 15-20 per cent average increase in monthly revenue per consumer during the Covid lockdown. 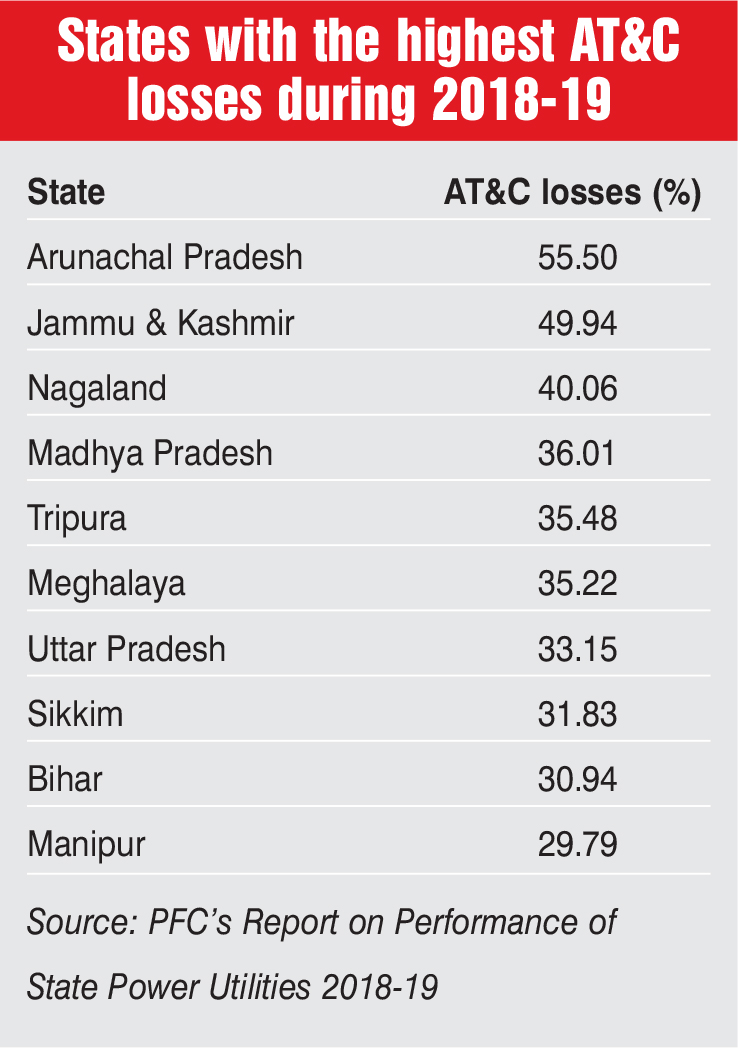 With the outbreak of Covid-19 and the subsequent lockdown, the power demand plummeted in the country, particularly from C&I consumers. In the April-June quarter of 2020-21, the power demand witnessed a decline of 16.2 per cent over the corresponding period of the previous year. The fall in power demand, especially from high-tariff-paying C&I consumers, and delays in cash collection from other segments has impacted discom finances.

According to an analysis by Emkay Global Financial Services, this would further increase the gap between the average cost of supply and average revenue realised to Re 0.95 per unit in 2020-21 from Re 0.50 per unit in 2019-20 due to lower offtake from the C&I segment, decline in payment collection and lower cross-subsidisation. This would lead to an under-recovery of Rs 1,127 billion in 2020-21 for discoms.

The widening revenue gap of the cash-strapped discoms has impacted their ability to pay the generators. As per the Ministry of Power’s (MoP) PRAAPTI portal, the discoms’ overdue amount as of June 2020 stood at Rs 1,192.12 billion, as against an overdue of Rs 728.53 billion as of June 2019. According to analysts, the overdue level is likely to remain high in 2020-21 due to the expected rise in under-recovery and slow loan disbursement under the Atmanirbhar scheme. Besides this, with the outbreak of the pandemic, a number of discoms invoked force majeure clause under their power purchase agreements (PPAs), claiming exemption from the obligation of purchasing power and making the necessary payments. Reportedly, discoms in Uttar Pradesh, Punjab, Haryana, Telangana, MP and Dadra & Nagar Haveli have invoked the force majeure clause for an indefinite period and asked the private sector gencos they have entered into PPAs with not to expect any payment till further notice. Despite SECI issuing notifications to the discoms, directing that force majeure claims by discoms will not be taken on board, certain discoms have continued to curtail power due to a fall in the collection of revenues, decline in consumers’ capacity to pay bills amidst the lockdown, etc. 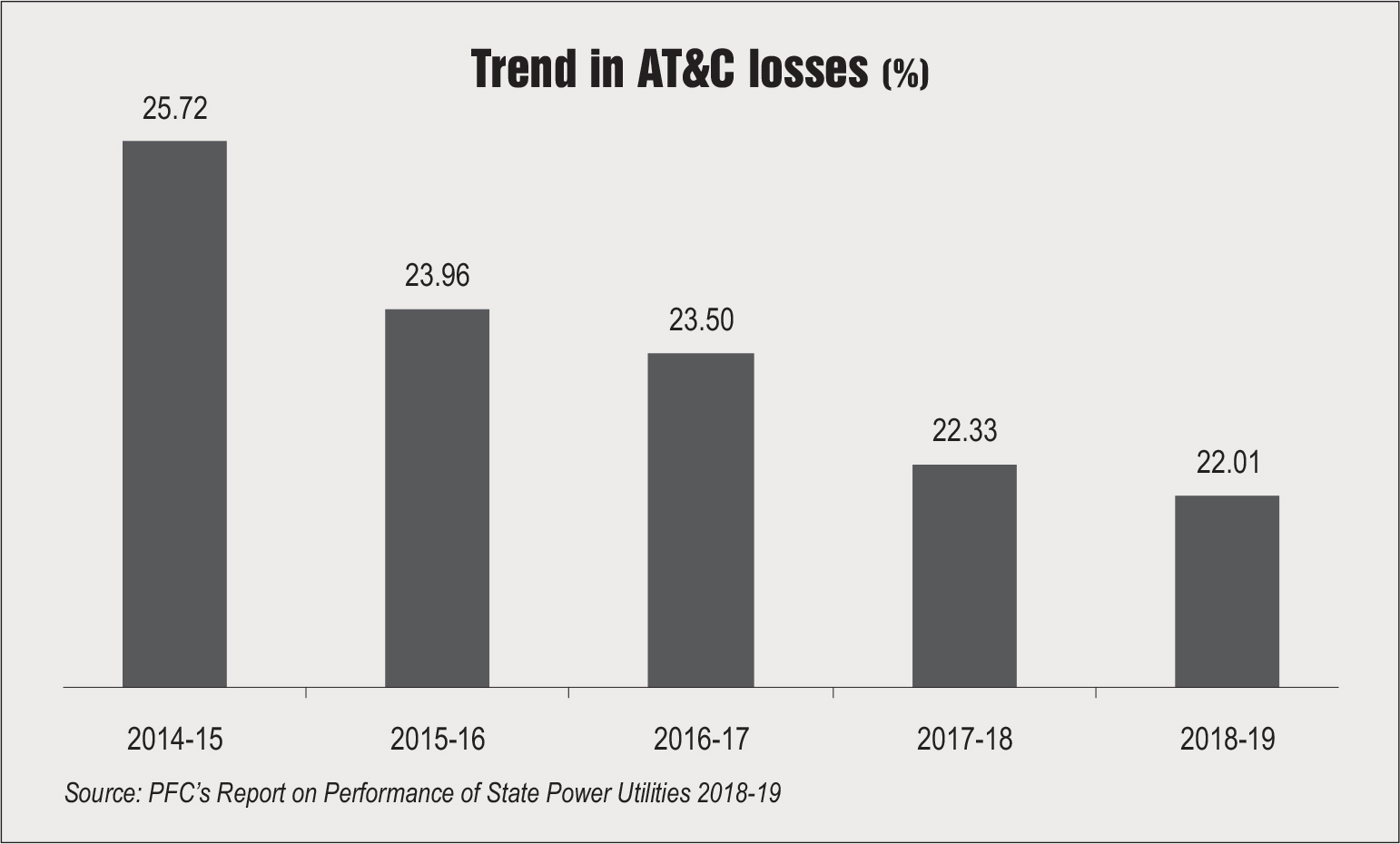 Liquidity infusion scheme for discoms: The government announced a mega

Rs 900 billion liquidity injection for discoms as a part of the Rs 20 trillion stimulus package under the Atmanirbhar Abhiyan. This would be extended as loans by REC Limited and the Power Finance Corporation (PFC), and will help clear their liabilities to gencos. The loans would be given out in two tranches of 50 per cent each. While Tranche I is expected to be disbursed by the second quarter of 2020-21, Tranche II will be disbursed later in the year. So far, loans aggregating Rs 680 billion have been sanctioned. Uttar Pradesh has sought the highest credit under the package at Rs 200 billion followed by Telangana (Rs 120 billion) and Karnataka (Rs 70 billion). Notably, the first tranche of credit has been released to Andhra Pradesh, Telangana and Uttar Pradesh.

Recently, the Cabinet Committee on Economic Affairs has approved a one-time relaxation to PFC and REC for extending loans to discoms above the working capital limit of 25 per cent of the previous year’s revenues under UDAY. Earlier, some of the discoms were not eligible for getting loans under the package because they were not meeting their working capital limits. Under UDAY, banks and financial institutions are restricted to lend a working capital up to 25 per cent of discom’s revenue in the previous year. Meanwhile, the states are now requesting the government to enhance the liquidity package for discoms to Rs 1,250 billion from Rs 900 billion to cover losses up to June 2020, as against the outstanding discom dues to gencos up to March 2020 covered earlier.

Tariff reforms and privatisation of UTs: Aside from the financial stimulus package, the government made some key reform announcements under the fourth set of the Covid economic package of the Atmanirbhar Abhiyan. One of the key announcements was the privatisation of power distribution in UTs, which would act as a model for the privatisation of power distribution at the pan-India level. PFC has appointed Deloitte and SBI Capital Markets (SBICAP) as consultants to help with the privatisation process. Deloitte has been appointed to help privatise discoms in Puducherry, Chandigarh and the Andaman & Nicobar Islands; while SBICAP will be assisting in privatising the discoms in Dadra & Nagar Haveli, Daman & Diu, Jammu & Kashmir, and Ladakh. The MoP is planning to soon issue standard bidding documents for the privatisation process, which is expected to be completed by end 2020. Several local and international companies are expected to participate in the bidding for UT discoms. The prospective bidders include NTPC, CESC Limited, Torrent Power, the Greenko Group, Tata Power, the Adani Group, Italy’s Enel Group, Malaysia’s Tenaga Nasional Bhd, Electricite de France SA, and Hong Kong’s CLP Group. In addition to this, the government has proposed a new tariff policy, laying down reforms for the direct benefit transfer (DBT) of subsidy, installation of smart prepaid meters, progressive reduction of cross-subsidies and timely payments to gencos.

Draft Electricity (Amendment) Bill, 2020: In April 2020, the MoP released the draft Electricity (Amendment) Bill 2020. The draft bill proposes that the discom can engage franchisees or sub-distribution licensees to distribute electricity on their behalf in a particular area within its area of supply, without any separate licence from the state commission. Providing information about it would be sufficient. The draft bill also promotes cost-reflective tariffs. It proposes that the state regulator determine the retail tariff without any subsidy allowed under Section 65 and the government pay the subsidy directly to any specific category of consumers. Besides, the bill proposes restrictions on the deferment of revenue recovery and reduction of cross-subsidy in order to bring in a cost-reflective and simplified tariff structure.

It proposes to strengthen the payment security mechanism by making its implementation mandatory unless it is waived by the parties to the contract themselves. For open access of electricity, the draft bill proposes to include intra-state and interstate transmission charges, wherever applicable, along with other open access charges. Another key proposal of the draft bill is the setting up of an Electricity Contract Enforcement Authority, which will have the original jurisdiction to settle matters related to the sale, purchase and transmission of electricity. Other key provisions of the draft bill include expanding the scope of the renewable purchase obligation (RPO) to include the hydropower purchase obligation (HPO) and increasing the penalty for the violation of the RPO and HPO targets. It also calls for drafting a National Renewable Energy Policy by the central government in consultation with state governments.

New reform-linked distribution scheme: Reportedly, a new reform-linked scheme is expected to replace UDAY, which expired on March 31, 2019. The new scheme is expected to focus on institutional reforms and the financial sustainability of discoms. The government expects an outlay of about Rs 3,000 billion under the scheme, which aims to lower the AT&C losses of discoms to 12 per cent, reduce the gap between costs and revenue, and promote private participation in power distribution. States with more than 18 per cent AT&C losses can opt for an infrastructure support reform package. The options are – the public-private partnership model, multiple supply and network franchises and input-based distribution franchises.

While there has been some recovery in the power demand in the past one month or so, it is expected to remain subdued during 2020-21. The all-India electricity demand is likely to decline by 5-6 per cent in 2020-21 over the previous year, steeper than the 1 per cent decline forecast earlier by ICRA Research. This would directly impact the discoms’ revenue gap, which is estimated to increase to Rs 420 billion-Rs 450 billion in 2020-21. Notably, the recovery of the revenue gap, if allowed through regulatory assets, would require a tariff hike of 2.5-3 per cent at an all-India level, assuming a three-year recovery period of regulatory assets.

That said, the liquidity package for the discoms will improve cash flows and bring immediate relief to the sector. For the overall well-being of the distribution segment in the long term, various reform measures, such as direct benefit transfer of subsidy, installation of smart prepaid meters and the proposed amendments to the Electricity Act, 2003 need to be implemented.