The power procurement strategies of distribution utilities are undergoing a structural change as they increasingly encounter challenges with long-term power purchase agreements (PPAs). For a long time, discoms have relied on multi-decade-long PPAs, with a tenors of 25 years, to meet the electricity demand. While this strategy of power procurement served the discoms well during the 1990s and 2000s when the country was reeling under generation shortages and this assured firm supply, now the conditions have changed considerably. With ample capacity addition taking place in this decade and relatively lower-than-expected growth in demand, the power sector has turned into a buyers’ market from a sellers’ one. Besides this, the discovery of record low renewable energy tariffs in recent years and the launch of new trading products on the exchanges have given distribution utilities a plethora of options to optimise their power procurement costs, making them wary of entering into long-term PPAs.

A key concern regarding long-term PPAs is that discoms have to project their demand for the next 25 years before signing the PPA. Now given the growth of decentralised generation, the rise of prosumers with net metering and a greater focus on energy efficiency, load forecasting has become more complex. A growing trend towards the electrification of transport, agriculture and cooking is further likely to impact demand in the coming years. The load mix and the shape of the load curve are changing and conventional methods of demand forecasting by extrapolating historical estimates are no longer precise. Nonetheless, 25 years is a fairly long tenors to estimate demand accurately, given the rapid pace of changes in the sector in terms of the energy mix and technological disruptions.

Another concern with these PPAs is that discoms are “bound” in long-term contracts wherein fixed or capacity charges have to be paid irrespective of the quantum of power drawn by them. This often strains the financial position of the already cash-strapped discoms, especially in times of low demand. For instance, when the electricity demand crashed due to the Covid-19-induced lockdown in March-April 2020, many discoms cited the force majeure clause to terminate PPAs in order to save their fixed costs, as their revenues had dipped considerably. Meanwhile, prices on the exchange declined to record low levels. In such cases, flexible or short-duration contracts would have helped discoms manage their power purchase expenses and deal with the crisis in a better manner.

The fourth report of the standing committee on energy, tabled in Parliament in March 2020, also sheds light on the issue. As per the report, the price under long-term PPAs is set for the entire duration of the agreement right at the start. When there is an escalation, for instance, a new technology (say renewables) comes into the market causing disruption, discoms find themselves stuck in these agreements. However, if gencos do not have long-term commitments, they cannot get finance from banks for their projects. So, this is a big conundrum that creates tension in the sector. In order to address the issue, the Ministry of Power (MoP) proposes to bring a policy paper soon on this subject. 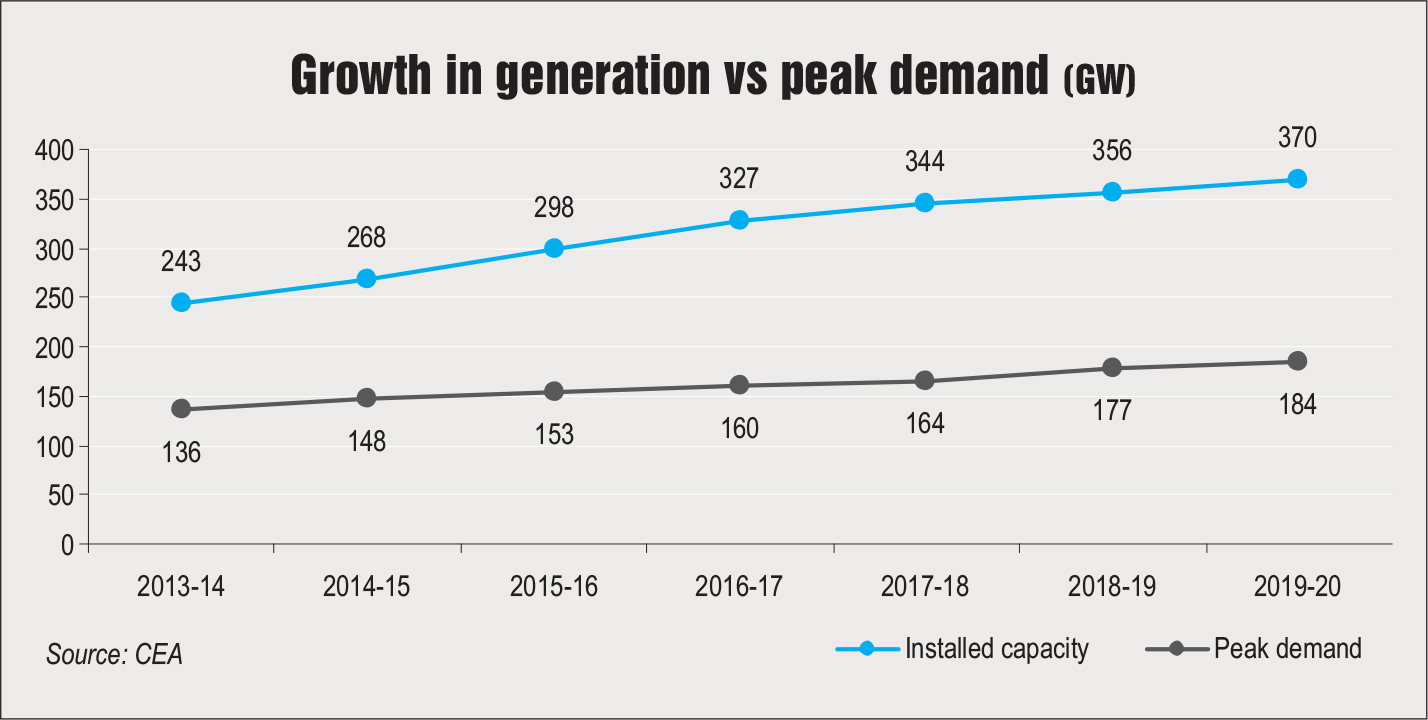 Given the challenges with long-term PPAs, most discoms have refrained from inviting long-term power procurement bids (for thermal power) in the past few years. Medium- and short-term power procurement strategies are gradually gaining traction. Government schemes are also focusing on shorter-duration contracts. A case in point is the MoP’s pilot scheme for the procurement of 2.5 GW of power for a medium term (three years). Twelve gencos were declared as successful bidders and a price of Rs 3.26 per unit was discovered in the Pilot Scheme II in February 2020. The first phase also entailed signing of medium-term contracts. Another alternative power procurement option is the short-term power market, which has grown considerably over the years and its volumes stood at 137 billion units in 2019-20. Since 2009-10, the volume of short-term transactions has grown at a compound annual growth rate (CAGR) of around 8 per cent. Power generation, meanwhile, grew at a much slower pace, with a CAGR of 6 per cent during the period.

The weighted average price of electricity transacted through power exchanges stood at Rs 3.24 per unit in 2019-20 and has fallen considerably since March 2020. As of August 2020, the average market clearing price at the Indian Energy Exchange’s (IEX) day-ahead market stood at Rs 2.43 per unit, recording a year-on-year decline of 27 per cent.

The exchanges have also launched two new products in the recent past – the real-time market (RTM) and the green term-ahead market (G-TAM), allowing discoms to manage their power demand dynamically and also to procure renewable energy at competitive prices.

The RTM platform, which was launched in June 2020, provides buyers and sellers an organised platform for power trading just an hour before delivery, enabling discoms and industrial open access users to better manage their demand, while allowing gencos to sell unexpected surplus power. Before the launch of the RTM, electricity could be delivered through spot contracts on the same day, next day, or on a weekly basis. The RTM has helped bring in the required flexibility to provide real-time balance, while ensuring optimal utilisation of the available surplus capacity in the system. So far (till August 2020), the IEX witnessed a cumulative trade of 2,157 MUs in the first three months. Around 242 customers were participating in the RTM market in August, and the RTM saw adequate availability of power with sell bids’ volume at about 2.5 times that of buy bids. Meanwhile, the G-TAM, launched in August 2020, enables trade in renewable energy on a pan-Indian basis in a transparent, flexible, competitive and efficient manner. At present, the trade in intra-day and day-ahead contracts in both solar and non-solar categories are live, while the trading, and daily and weekly contracts will commence shortly.

Going a forward, the exchanges may soon open the derivatives market for the power sector, allowing generators and consumers to enter into a futures contracts and use them as a new hedging tool to mitigate price volatility and other associated risks. Recently, in July 2020, the MoP approved trading of electricity through forward and derivative contracts, subject to the outcome of a case in the Supreme Court. An order to this effect was issued by the power ministry after consultation with the Solicitor General. The development is indicative of a resolution of a decade-old jurisdictional conflict between the Central Electricity Regulatory Commission (CERC) and the Securities and Exchange Board of India (SEBI). SEBI is expected to oversee the functioning of all financially traded electricity forwards, while the CERC would regulate physically settled forwards, where electricity is delivered at a future date at the contracted price. Once futures trading starts, power exchanges would be in a position to offer derivative instruments to participants. This could be electricity futures with a clear delivery-based schedule (delivery at a price on a future date) and other derivative instruments such as call and put options. This will help both generators and consumers to mitigate risks by hedging their positions through derivative instruments. The introduction of pure-play futures and options as products on the power trading platform would be a major reform initiative that would help in developing a robust and vibrant energy market.

In order to facilitate the transition towards spot and short-term markets from the policy and regulatory standpoint, there is need for a proper contract regulation and spot market design, incentives for spot market participation, tools to hedge risks and maintaining competition in markets. A report by the United States Agency for International Development under its Greening the Grid programme, in collaboration with the MoP, lists out certain takeaways to enable this transition, with cues from developed electricity markets such as California and New York.

As per the report, long-term bilateral contracting can be compatible with merit order despatch, but enabling compatibility between them may require changes in markets and regulatory frameworks to reduce self-scheduling. For instance, bilateral contracting continues to be an important part of electricity markets in California and New York. Regulators have incentivised generators and load serving entities (LSEs) with bilateral contracts to participate in the spot market merit order despatch through broadly three strategies. These are real-time balancing markets, mandatory spot market settlement for all supply and demand, and the requirement for all generators to submit economic bids in spot markets.

In addition, hedging tools are critical for managing electricity spot market risks, but the development of exchange-traded financial products for electricity will likely be demand-driven and iterative. Financial products also need to evolve gradually and iteratively over time to adapt to the industry demand, mainly shaped by utility regulation and contracting requirements for resource adequacy. Further, as reliance on spot markets increases, resource adequacy and fairly allocating fixed generation costs become more important. For instance, during periods when spot market prices are low, LSEs in California and New York prefer not to sign long-term contracts, raising concerns over investment in new generation. To address this, policymakers have both developed resource adequacy programmes that require LSEs to demonstrate on a year-ahead or monthly basis that they have adequate resources under the contract to meet forecasted demand, plus a reserve margin.

It must be noted that developing or expanding electricity markets does not reduce the cost of expensive legacy contracts, but it helps improve future decision-making.

The higher penetration of solar and wind power generation increases the importance of a well-functioning spot market. Having a well-functioning balancing market that charges and pays renewable energy buyers and sellers a market price for imbalances and pays conventional generators market price for their increased ramping and cycling costs is critical to enable higher penetration of renewable energy at a relatively low cost.

Although forward, real-time balancing and ancillary services markets are interactive in nature, and the lack of consistent incentives across markets can create opportunities for gaming and reliability challenges. Therefore, it is necessary to continually adjust market rules to ensure that incentives are aligned. Besides, it is also necessary to develop institutions for market monitoring.

Even with the increase in power procurement via the short-term power market, the share of short-term contracts remains small – at 10 per cent of the total – while a major share (90 per cent) is accounted by long-term contracts. However, as old long-term PPAs expire in the coming years, discoms are unlikely to enter into many such 25-year contracts simply because they may not make commercial sense. The ideal strategy would be to have an optimal mix of a few bulk supply agreements, say, 5-10 years long, mainly for meeting the baseload demand while relying on medium-term or short-term contracts for meeting the remaining demand. This would help discoms optimise their power procurement costs in an efficient manner and, in turn, reduce tariffs for consumers.

It is understandable that developers and financiers want to have tariff certainty over a longer period for recovery of their investments, given the long gestation period of thermal power projects and the high quantum of debt involved. However, in the current scenario of shorter-term PPAs, financiers need to come up with innovative lending products to fund power projects with PPAs of 5-10 years, instead of 25 years. Thermal power generators also need to diversify their customer profile and have a mix of discoms and industrial customers as well as a mix of short-term, medium-term and long-term PPAs.

Policymakers on their part need to take steps to create flexible contracts in the power market to make them more competitive and less rigid for market participants.