Over the years, the power distribution segment has been plagued with issues such as weak financial performance, high operational losses and poor customer service. Private participation has often been suggested as the solution for all such issues. While the country has seen some progress in private participation in the distribution

segment, in a major announcement recently, the government announced the privatisation of the distribution segment in the union territories (UTs).

The distribution segment today is on the cusp of transition. This can be attributed to a number of factors. To begin with, there are rising expectations of consumers from utilities for providing 24×7 power supply, a requirement which many state-owned discoms are still not able to meet.

Also, the financial condition of discoms has deteriorated over a period of time. During 2018-19, operational losses for all discoms stood at an unsustainable level of Rs 2,500 billion, indicating that subsidies and borrowings are the only way to bridge the gap. Liquidity of discoms has been further constrained owing to the Covid-19 pandemic and associated lockdown. While there has been a lot of support from the government in the form of liquidity measures such as the recent Rs 900 billion line of credit and schemes such as UDAY for discom turnaround in the past, the consensus is that until there is a higher level of efficiency through technology interventions or private participation, financial losses will remain. These will continue to be a burden on the balance sheet of utilities and states, and will, in turn, affect the service quality of consumers.

The power sector is gearing up for a number of new changes such as the integration of renewables, proliferation of microgrids and expansion of battery storage. These have made the task of managing the grid even more technical and complex. This demands that discoms be managed very professionally and in a much more technologically advanced way. Covid has further accelerated the process of adapting to technology.

These trends, coupled with low power demand and the resultant revenue gap, require a tremendous shift in discoms’ working. In this backdrop, discoms should decide whether to opt for privatisation or continue by themselves. However, privatisation has to be done in a sustainable manner so that it is a win-win situation for all the stakeholders. States and utilities that are still reluctant to privatise could learn from the success in other infrastructure sectors such as highways and airports.

For privatisation, the key stakeholders are private investors, the government and consumers. For consumers, privatisation would help in ensuring better and reliable 24×7 power supply at affordable tariffs.

With respect to private investors, privatisation offers an opportunity for incumbent players in the power sector to enter or expand their presence in the distribution space as well as enhance business value by entering into new geographic areas and by attracting more business. Another aspect that private investors would be looking at is access to consumers. The distribution segment is the last mile in the power sector value chain, where discoms directly deal with consumers. Going forward, as market reforms take place, consumer access is going to play a big role in the entire process. Privatisation will provide them an opportunity to reach the consumer.

The government is looking at privatisation as a solution to ensure technical and financial viability of utilities, and to provide the consumer better services with 24×7 power supply. This would help in reducing the subsidy burden on the government since the current levels are not sustainable and are, in fact, expected to worsen due to Covid. 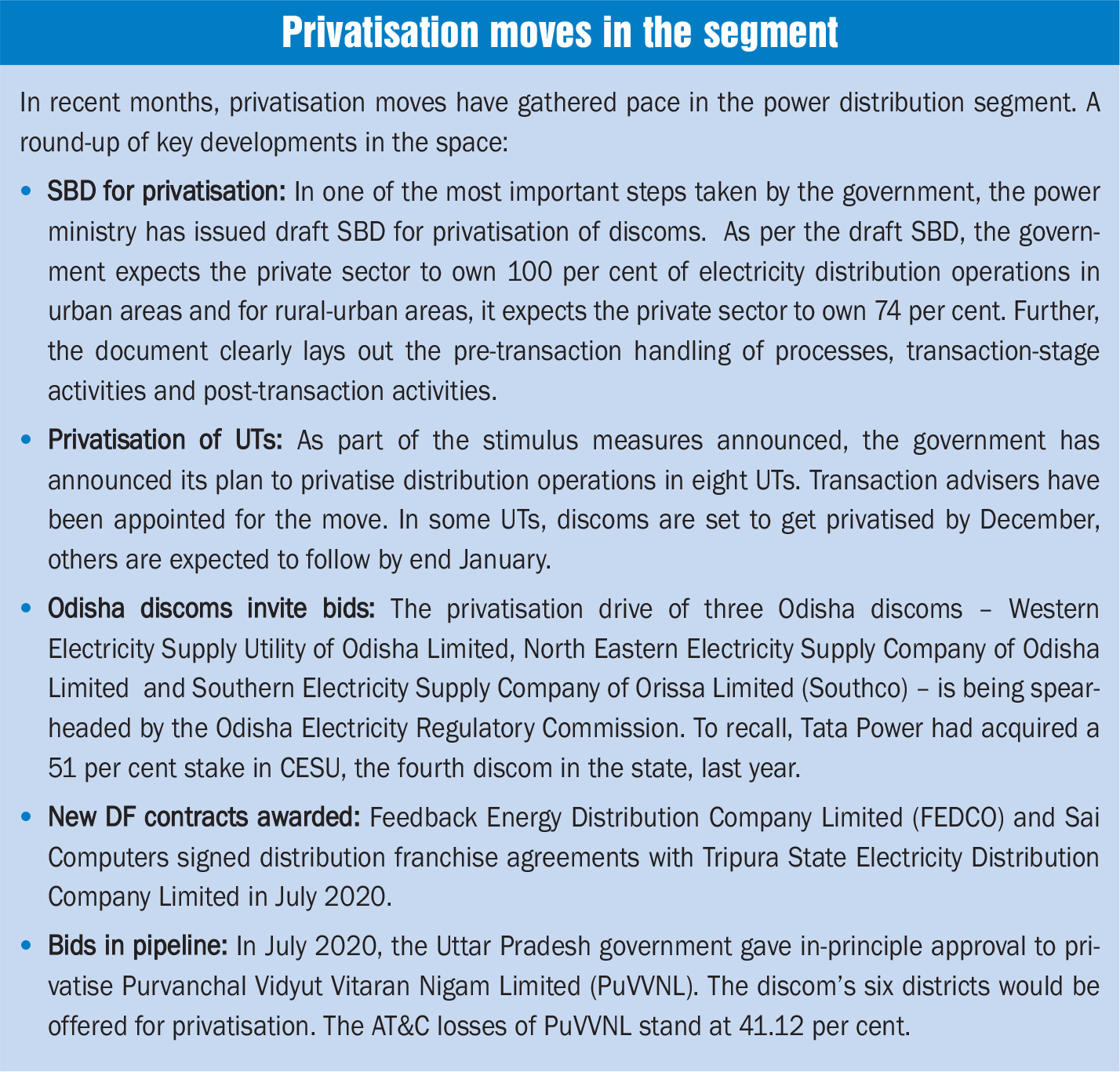 There are three models that could be broadly considered for adoption – privatisation, distribution franchises (DFs) or the outsourcing model such as metering, billing and collection (MBC).

For privatisation, there could be two  models – one is the “transfer of assets” to investor, as was adopted in the Odisha discoms’ privatisation exercise wherein the assets were transferred at value to bidders. Another variation could be the “right to use” model, where the existing assets remain with the incumbent and an annual fees is paid for usage. Bids in this model can be invited on efficiency parameters such as a reduction in AT&C losses. Other possible variations could be equity valuation-based bidding, or AT&C loss reduction commitment-based bidding, bidding based on parameters such as viability gap funding (VGF), subsidy reduction and replacement of DG sets.

Ultimately, the variation in privatisation models would depend upon who is the driving force behind the process, that is, whether it is regulatory commission driven, sale-or government-driven.

For UTs, AT&C losses are already below 15 per cent and their tariffs are also in a good range. In such a case, the valuation model with an innovative bidding parameter could be the most appropriate model to consider. Hence, the bidding model can be based on subsidy reduction trajectory or on the replacement of DG sets or maybe VGF.

Expected outcomes and challenges in privatisation in UTs

UT privatisation could lead to standardisation of processes as a standard bidding document (SBD) would be in place, which could then be adopted by state utilities in the future. Further, many UTs cover large cities such as Chandigarh, Puducherry, Daman & Diu; hence, successful implementation of the UT privatisation process would encourage state utilities to go ahead with privatisation. The process would also help define the role of regulatory commissions and the transition support that the government would provide, liabilities it would take, and the kind of tariff subsidy support it would provide.  However, some of the challenges that private investors envisage are uncertainty in allowance of expenditure by regulators, treatment of capital expenditure, and most importantly, the issue of regulatory assets. Other bottlenecks would be around the accuracy of baseline data based on which discoms submit their bids, a realistic loss reduction trajectory and  power purchase cost flexibility. The challenges for the government would be around the treatment of past liabilities. Further, employee resistance, lack of policy framework and lack of competition may pose obstructions.

Going forward, private utilities advocate the public-private participation (PPP) model because it gives a good opportunity to the private sector to bring in investments and also offers a good regulatory purview  to perform, which is lacking in the case of the DF model. The PPP model can bring in better coordination. Also, the franchise model is a contracting business and it does not give DF the right to undertake capital investment. As a result, consumer services suffer because the focus is more on collection efficiency. Thus, in contrast, the PPP model works better to ensure that investments come into the sector and responsibilities are more clearly defined. With the right mix of efficiency improvement and capex, the private sector can manage tariff pressures better.