The power generation segment has grown at a rapid pace over the past few years, but the  Covid-19 pandemic and consequent lockdowns have severely affected electricity demand. This has led to a drastic reduction in the power generation and plant load factors (PLFs) of thermal power plants (TPPs). Gencos are increasingly facing payment defaults, as the liquidity of discoms has been further constrained owing to the crisis. As per the PRAAPTI portal, the outstanding dues as of end July 2020 stood at Rs 1,172 billion vis-à-vis Rs 760 billion in July 2019. The central government has taken quick steps by introducing the Rs 900 billion liquidity infusion scheme to help discoms pay their dues to generation companies (gencos).

Power Line presents an update on the key trends and developments in the generation segment over the past year.

The total power generation stood at 1,250 BUs in 2019-20, almost the same as in the previous year. Of the total generation, the majority, 83.4 per cent, was accounted for by thermal sources, 12.5 per cent by hydro, 3.7 per cent by nuclear and the rest by imports from Bhutan. In addition to this, renewable energy generation stood at 138 MUs during 2019-20, marking an increase of more than 9 per cent over the previous year.

During April-August 2020, the total power generation stood at around 490 BUs – about 11.5 per cent lower than 554 BUs recorded in the corresponding period last year, mainly owing to lower demand due to the Covid-induced lockdowns. Generation from thermal sources recorded the maximum decline of 15 per cent to 387 BUs during the period April-August 2020 vis-à-vis 456 BUs during April-August 2019. Hydro and nuclear generation was close to last year’s levels at about 78.5 BUs and 18 BUs respectively. Meanwhile, imports from Bhutan increased by 86 per cent to 5.4 BUs from 2.9 BUs, although in absolute terms they accounted for a minor share in the generation mix. Generation from renewables recorded a marginal decline during April-July 2020 to 51.55 BUs versus 52.4 BUs in the corresponding period last year.

During April-August 2020, the PLF of coal-based plants stood at 48.3 per cent, a decline of 10 percentage points from the 59.2 per cent registered in the corresponding period last year, owing to the effects of the pandemic. Gas-based capacity, meanwhile, recorded a marginal improvement in PLF during this period to 26.64 per cent from 23 per cent last year, owing to the softening of liquid natural gas prices, which led to greater imports by gencos. 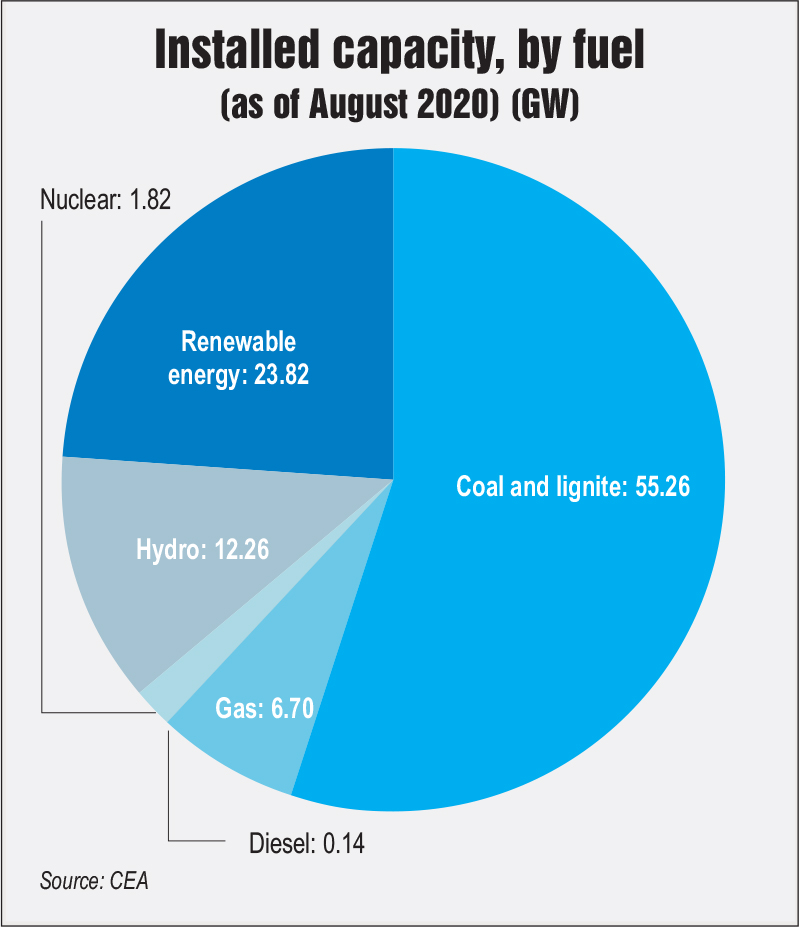 Relief measures for  Covid-19: The Ministry of Power (MoP) notified the essential operation of power generation utilities amidst the lockdown to maintain uninterrupted power supply. The ministry stated that gencos would continue to supply electricity even to discoms that had large outstanding dues and there

would be no curtailment of supply. The MoP also directed the Central Electricity Regulatory Commission (CERC) to provide a moratorium of three months to discoms to make payments to gencos. For the period March 24 – June 30, 2020, the late payment surcharge (LPS) was reduced; however, after June 30, 2020, LPS was again payable at the rates given in the power purchase agreements (PPAs)/regulations. Apart from this, the MoP stated that till June 30, 2020, the payment security mechanism to be maintained by discoms with gencos for the despatch of power was to be reduced by 50 per cent. Recently, the MoP advised all power generating companies and transmission companies to charge distribution utilities LPS at a rate not exceeding 12 per cent per annum for all payments made under the liquidity infusion scheme as part of the Atmanirbhar Bharat initiative.

Update on emission norms compliance: As per the Central Electricity Authority (CEA), flue gas desulphurisation (FGD) systems, which aid in SOx emission control, are to be deployed by 437 thermal units aggregating 166 GW in a phased manner by 2022. Similarly, electrostatic precipitators (ESPs), which help in controlling particulate matter emissions, are to be installed in 220 units totalling 63.4 GW by 2022. The deadline for the installation of emission control equipment in captive power plants (CPPs) was June 2020. The compliance status as of March 2020 was quite poor, with only four units totalling 1,740 MW having commissioned FGDs, or just 1 per cent of the targeted capacity. However, tenders have been issued for 113.6 GW of capacity and bids have been awarded for nearly 40 GW. Gencos are facing project execution delays owing to the disruption in the supply chain due to the pandemic. With the majority of the tendered capacity expected to miss the 2022 deadline, the MoP recently wrote to the Ministry of Environment, Forest and Climate Change to grant an extension of two years to 322 units, aggregating about 100 GW. In a move that brought major relief, the Supreme Court, in July 2020, relaxed the NOx limit for coal-based power plants commissioned between December 2003 and 2016 to 450 mg per Nm3 from 300 mg per Nm3.

In September 2020, the CERC floated a staff paper on the mechanism for compensation on account of a change in law, that is, for compliance with revised emission standards in the case of competitively bid TPPs. The paper suggests that TPPs retrofitting pollution control systems in commissioned units would be allowed to recover their costs in part from buyers during the tenor of their PPAs, as the notification of norms is a change in law event. The CERC has suggested that 90 per cent of the cost of installation be recovered over the life of the emission control equipment (which is estimated at 25 years) and the remaining 10 per cent could be salvage value. If a project is already operational, the genco can start billing the power procurer once the pollution control equipment is commissioned. The reimbursement would be in proportion to the generation capacity tied up by the genco. After a PPA expires, the genco will have to tie up with another procurer or sell power in the open market to recover its remaining costs. In a recent order, the Appellate Tribunal for Electricity asked the Punjab government to consider the investment made by Talwandi Sabo Power Limited and Nabha Power Limited in installing emission control equipment for relief under the change in law clause of their respective PPAs. 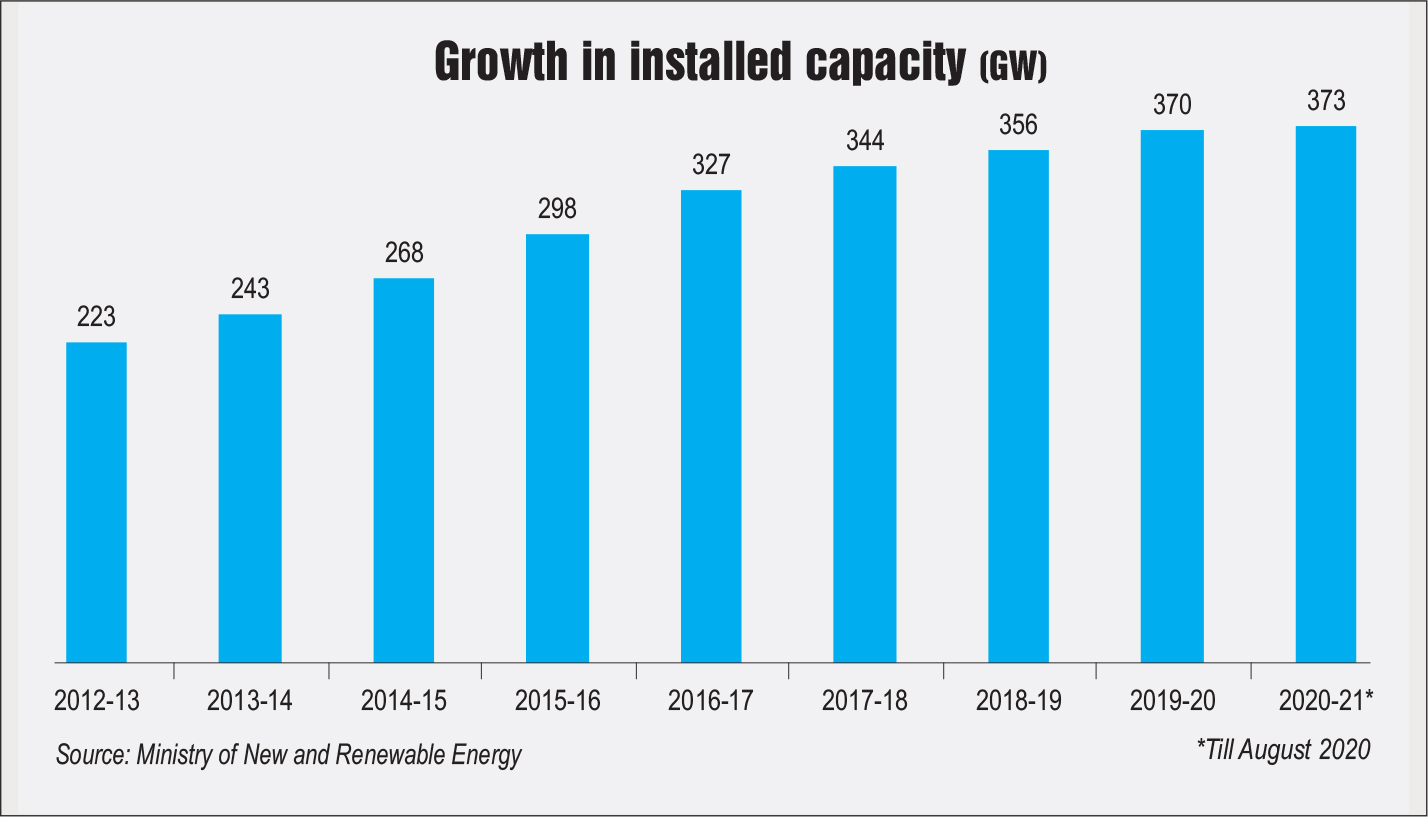 Coal supply update: Owing to a decline in power demand due to the lockdown, TPPs currently have sufficient coal stocks and are, therefore, not lifting coal. Gencos’ payments to Coal India Limited (CIL) have also been affected. The MoP has issued a letter to gencos to reduce coal imports and use domestic supplies as coal stocks are piling up at pitheads. Currently, imported coal is used by about 162 GW of coal-based capacity. While 144.6 GW of this capacity imports coal for blending with domestic coal, about 17.6 GW is designed to run exclusively on imported coal. As a result of the ministry’s advice as well as owing to low demand, coal imports have fallen by over 36 per cent during April-July 2020 to 14.8 mt, as opposed to 23.4 mt during April-July 2019. Further, in order to encourage offtake of domestic coal by gencos, the Ministry of Coal (MoC) has recently approved CIL’s plan to supply 100 per cent of the normative requirement to thermal power units. The MoC has recommended increasing the annual contracted quantity (ACQ) of coal to 100 per cent of the normative requirement of a non-coastal plant, from the earlier 90 per cent. For coastal plants, the ACQ has been increased to 70 per cent.

Hydro’s role in grid management: Hydropower played a crucial role in the management of the pan-India lights-off event by the Power System Operation Corporation, which took place at 9 p.m. on April 5, 2020 during the  Covid-19 lockdown. The anticipated reduction in all-India demand during this event was estimated at 12-14 GW; however, the total reduction recorded during the event was much higher, at 31,089 MW. Prior to the event, there were concerns that the sudden fluctuation in demand could result in grid instability and blackouts in many states. However, hydropower plants played a key role by providing the flexibility to quickly ramp generation up or down as they take the least time to switch on or off. Hydropower’s role in grid balancing is well known, and policymakers are now looking at it seriously to manage the vast integration of renewables into the grid. After the reclassification of hydro as renewables under the hydro policy issued last year, the centre plans to impose hydropower obligations to ensure firm offtake of hydropower.

Stressed assets: As of March 2018, there are about 40.1 GW of stressed assets – worth Rs 2,366 billion – in the thermal power sector (24.4 GW commissioned and 15.7 GW deemed under construction) as per the Parliamentary Standing Committee on Energy. The causes of stress include lack of fuel linkage, lack of PPAs, inability of promoters to infuse liquidity, contractual and tariff-related disputes, cost overruns and over-aggressive tariff bidding by developers. So far, the resolution of stressed assets has been slow despite the efforts of lenders and the government. Only about 10 per cent of the 40 GW stressed capacity has achieved resolution, mainly through acquisitions by new sponsors, as per ICRA. Cases in point include Renascent Power’s acquisition of the Jaypee Group’s 1,980 MW Bina TPP and Adani Power’s acquisition of Korba West. JSW Energy had also decided to acquire GMR Kamalanga Energy Limited, which operates the 1,050 MW TPP in Odisha, but the company has now shelved the acquisition plan owing to the Covid-19 impact.

Power procurement under the Pilot Scheme II: In February 2020, a tender was called for the second round of the pilot scheme for the procurement of 2.5 GW of power. PTC India was the aggregator for this round. The lowest tariff discovered in this round was Rs 3.26 per unit, quoted by Adani Power. Earlier, auctions under the second phase of the pilot scheme, concluded in December 2019, had been cancelled due to discovery of a high tariff of Rs 4.41 per unit.

The Covid-19 pandemic has dealt a major blow to the generation segment, which was already struggling with a number of issues. Pan-Indian electricity demand, which has seen a drastic reduction due to a decrease in commercial and industrial activities, is likely to decline further by 5-8 per cent in 2020-21. The decline in demand is expected to suppress the PLF of TPPs across India to technical minimum levels. This will further delay the resolution of stressed thermal assets, the majority of which are impacted by the lack of long-term PPAs. The demand glut comes at a time when the generation segment is already struggling with huge unpaid dues.

The conventional generation segment, especially coal-based power, is facing challenging times not only because of  Covid-19-related disruptions and strong competition from renewables, but also due to long-standing issues such as lack of domestic coal linkages and PPAs. The government’s recent move to open up the coal sector to commercial mining is likely to address the issue of fuel shortage, while the proposed reforms in distribution (under the Electricity Act, 2003) are expected to revive power procurement by discoms in the long run. However, in the coming years, the role of coal in the power generation segment is likely to transition to a supportive one from the dominant position that it has enjoyed over the years. As per the CEA’s study on Optimal Generation Capacity Mix for 2029-30, the installed capacity by the end of this period will reach 831,502 MW, with solar (300,000 MW) surpassing coal-based power (266,827 MW). The expected installed capacity of other sources is 64,089 MW of hydro, 5,000 MW of small hydro, 4,356 MW of hydro imports, 24,350 MW of gas, 16,880 MW of nuclear, 140,000 MW of wind and 10,000 MW of biomass, along with a battery energy storage capacity of 34,000 MW/ 136,000 MWh. Going forward, flexibilisation will be key for coal-based power plants as renewables gradually take centre stage.