The renewable energy sector in India has been growing consistently over the past few years. As of August 2020, India’s installed renewable energy capacity stood at 90 GW, accounting for 24 per cent of the total installed power capacity, which stood at 372.7 GW. Initiatives such as the National Solar Mission, the solar park scheme, and solar rooftop and solar pump programmes have pushed this sector ahead. The past year has seen some notable developments in the sector. One of these has been the removal of tariff caps in tenders, along with the scaling up of tender capacities, by the Solar Energy Corporation of India (SECI). Earlier, the large-scale SECI tenders were limited to 1.2-2 GW capacity, but over the past few months, tenders with much larger capacities have been introduced including a manufacturing-linked tender for 7 GW of capacity and a 7.5 GW tender for solar projects to be developed in Leh and Kargil.

To address the intermittency issues in solar and wind power generation, a few exploratory tenders were launched. In January 2020, SECI launched a 1.2 GW tender with solar, wind and storage capacity for the supply of peak power. It recorded tariffs of Rs 6.12 per kWh and Rs 6.85 per kWh from Greenko and ReNew Power for 900 MW and 300 MW of capacity respectively. In March 2020, SECI issued an exploratory tender, inviting developers to supply 5 GW of round-the-clock power from grid-connected renewable power projects bundled with power from coal-based thermal projects. Apart from these landmark tenders, the Ministry of New and Renewable Energy (MNRE) has sanctioned a scheme for tariff-based competitive bidding for the procurement of renewable power from 2,500 MW of ISTS-connected blended wind power projects, to be implemented by SECI. The electricity procured from these wind power projects will have solar PV blending of up to 20 per cent. Another major development was the introduction of the Draft Electricity (Amendment) Bill, 2020, on April 17, 2020, to address the key challenges facing the power sector. The proposed amendments are conducive to the growth of the renewable energy sector and aim to remove the impediments faced by developers. The draft amendment addresses issues related to compliance with renewable purchase obligations, timely adoption of tariffs and grid curtailment.

Even with the right policy environment and a tendering trajectory in place, the sector has been suffering lately on account of a variety of implementation challenges including delays in land acquisition, transmission unavailability, bureaucratic hurdles, and mounting dues from discoms. These issues have been further exacerbated by the Covid-19 pandemic, which has disrupted supply chains, made labour scarce and delayed project completion across segments.

The solar energy segment has an installed capacity of 35.7 GW as of August 2020. The share of solar in the renewable capacity mix has continued to grow in the past year. It stood at 40.2 per cent in August 2020 as against 37 per cent in August 2019. The growth in solar capacity addition can be attributed to the steep decline in module prices, which helped solar tariffs achieve grid parity. SECI’s 2 GW solar tender under ISTS (Tranche IX) recorded a historic low solar tariff of Rs 2.36 per kWh from Spanish developer SolarPack in June 2020. The auction was conducted after a gap of four months owing to the disruption caused by the pandemic. Apart from falling project costs, the low tariff is a result of developers’ aggressive bids to expand their portfolio in order to generate higher returns. In another major development, in June 2020, Adani Green Energy emerged as the biggest winner under SECI’s manufacturing-linked solar tender. It won the world’s largest solar order to build 8 GW of PV power plants in India, along with a 2 GW domestic solar panel manufacturing unit, at a tariff of Rs 2.92 per kWh. Meanwhile, the rooftop solar segment continues to face implementation issues especially in the context of net metering.

The solar segment has lost some momentum in recent months due to execution challenges involving large land and transmission requirements. However, in spite of the supply chain disruptions and timeline delays due to Covid-19, the solar segment has managed to perform better than other renewable segments during these months. While the Covid-19 outbreak has thrown up a major supply challenge for the solar equipment industry, it has also created an opportunity. In line with India’s focus on becoming self-reliant, the solar industry is collectively moving towards scaling up its domestic manufacturing. The government has been supporting this shift to cut imports. Its recent decision to extend safeguard duties on imported solar cells and modules is a step to incentivise developers to take up local production. 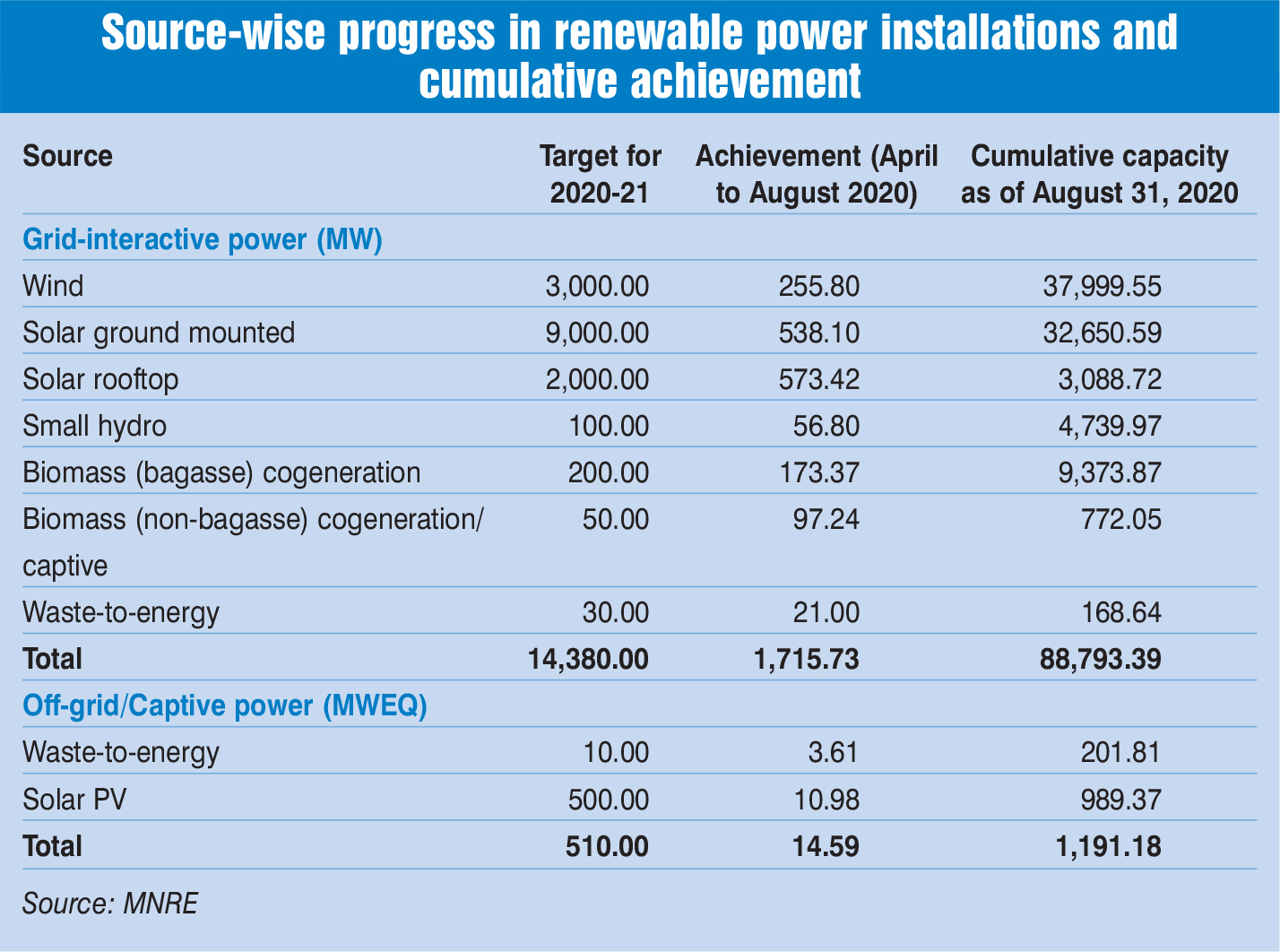 The installed wind power capacity in India stood at 38 GW as of August 2020, making up 42.8 per cent of the total installed renewable capacity. Despite impressive growth numbers, the Indian wind power segment has been dealing with challenges in the past year, leading to a slowdown in capacity additions. Only 2.4 GW of capacity was added in 2019 as against 4.1 GW added in 2017. Due to issues like low tariff caps, offtaker concerns, and grid and land unavailability, tenders have been getting a poor response. A recently concluded wind energy auction was undersubscribed, with SECI allotting only 970 MW of the 2 GW wind power generation capacity tendered for ISTS-connected wind projects. Further, there have been multiple cases of tender delay and cancellation, and some of the allotted projects have been delayed by more than six months. Developers and investors have become wary due to unviable and low tariffs, price matching and contract renegotiation, unpaid dues, and transmission delays.

Sluggish growth in bioenergy and hydro

Having achieved its modest bioenergy target of 10 GW by 2022, India’s growth in the segment has been relatively slow. As of August 2020, the country’s total installed bioenergy capacity stood at 10.3 GW (including waste-to-energy capacity), compared to the total available potential of 25 GW. One of the more active subsets of bioenergy is biofuel. The government is currently working on a four-pronged strategy for promoting ethanol, second-generation ethanol, compressed biogas and biodiesel.

The small-hydro segment continued its lukewarm journey with a capacity of 4.7 GW as of August 2020, having added only about 135 MW over the past year. While the segment has been suffering from policy inaction and lack of investments for quite a while, there have been some key developments in the past year. From the inclusion of large hydro in the renewable energy category to the revision of cross-border electricity trade guidelines, the sector’s role in power generation and load balancing received some acknowledgement. However, some of these policies have not been formalised, and thus their benefits have not percolated to the relevant stakeholders. Meanwhile, private participation in the sector is still deficient. While these challenges continue to plague the segment, the application of pumped hydro storage for balancing renewable power from other sources provides a promising opportunity.

The market scenario for renewables is quite dynamic. New segments such as wind-solar hybrids, floating and canal-top solar, offshore solar and storage applications have come up in recent times. However, there are still many challenges in terms of policy environment, economic viability and implementation hurdles.

One of the key developments in the solar segment will be the shift to domestic manufacturing. The industry will have to compete with the low-price standard established by Chinese companies. It will have to make solar projects viable to develop and operate at lower tariffs. The wind segment is likely to experience continued slowdown due to the slow uptake in the segment. Although the offshore wind potential is being explored on the Gujarat coast, such projects are not expected to reach commercial viability on a large scale in India soon.

The renewables sector has also been impacted by the Covid-19 pandemic, resulting in a restricted supply chain and extended timelines for projects under implementation. Further, investors have become wary and debt financing has become difficult due to the high risks perceived in renewable energy projects, especially in the face of delayed payments from discoms. In view of these challenges, the 2022 renewable targets seem ambitious. While the policy scenario is conducive, the government must work with the industry to address implementation issues in order to restore the momentum in the sector.