The Bombay Stock Exchange (BSE) Power Index tracks the share prices of 14 power companies operating across various segments of the industry and is weighted by free-float capitalisation. Over the past 12 months, it plunged 9.48 per cent, from 1,844.82 points on September 3, 2019 to 1,669.87 points on August 31, 2020. During the same period in 2017-18, it had posted a greater plunge of 10.72 per cent. Of the 14 companies currently comprising the index, Adani Green Energy Limited (AGEL), KEC International and Torrent Power were among the best stock performers during the review period. Meanwhile, the stocks of Adani Power, Bharat Heavy Electricals Limited (BHEL) and Thermax reported a decline.

An overview of the stock market performance of BSE Power Index companies during the period from September 1, 2019 to August 31, 2020…

Generation companies registered a positive return of 124.15 per cent (unweighted average) during the review period, which is a significant increase as compared to the previous year, when they recorded a negative return of 2.13 per cent.

Private power major Tata Power experienced an increase of 9.01 per cent in its share price during the period under review. Tata Power’s consolidated income in 2019-20 stood at Rs 296.98 billion as against Rs 302.67 billion in 2018-19, reporting a decline of 1.87 per cent. Meanwhile, its net profit stood at Rs 13.16 billion in 2019-20 as against Rs 26.06 billion in 2018-19, a decline of 49.5 per cent. As of August 2020, the company has a generation portfolio of 12.7 GW, of which 3.8 GW comes from green energy. In a key development last year, Renascent Power Ventures Private Limited, Tata Power’s associate company, acquired a 75.01 per cent equity stake in Prayagraj Power Generation Company Limited. Further, Tata Power completed a 51 per cent equity stake acquisition of the Central Electricity Supply Utility of Odisha through public-private partnership (PPP) with operations being taken over from June 1, 2020. Recently, the company received in-principle approval from its board for an InvIT, with the transaction expected to be completed by the fourth quarter of 2020-21. 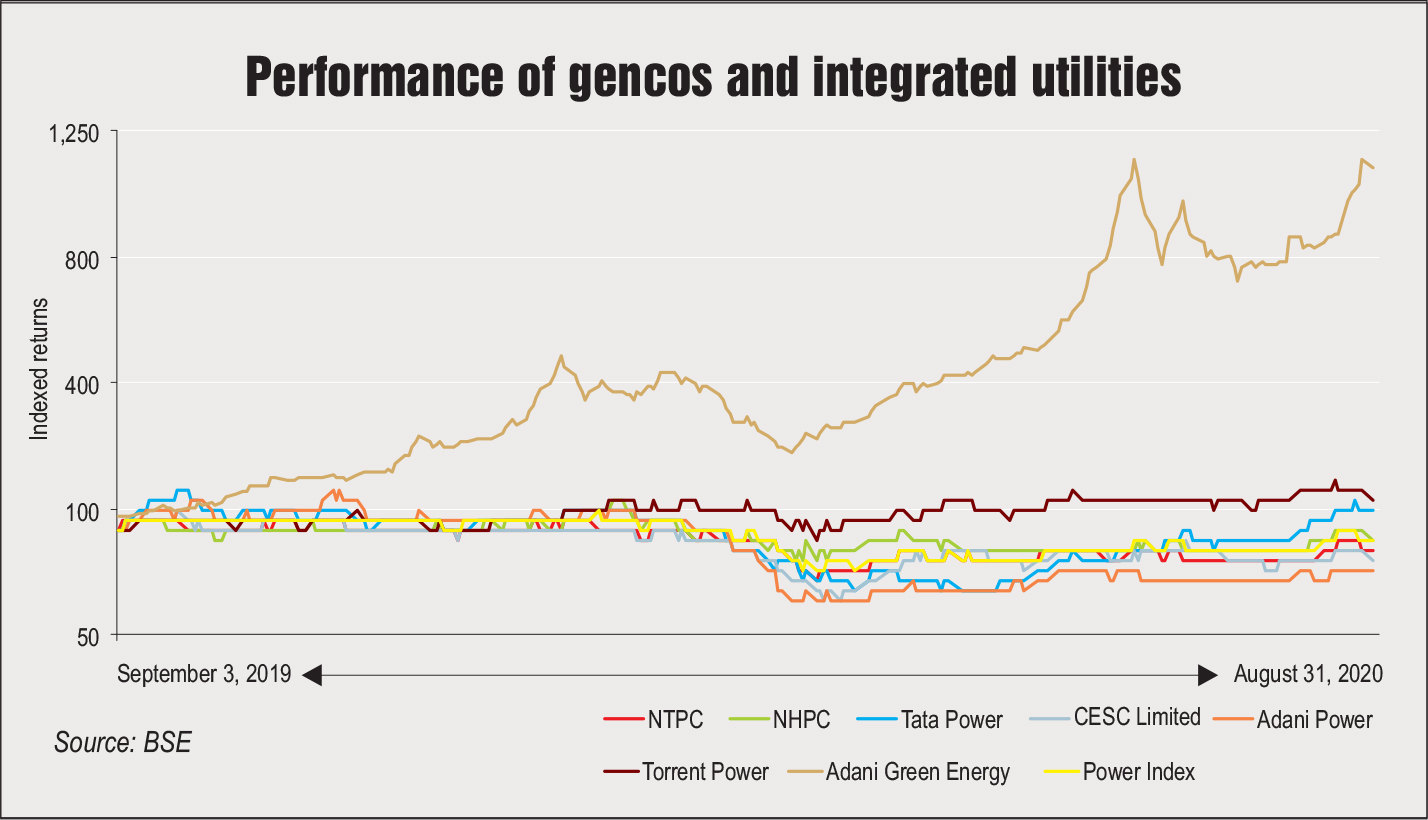 Adani Power Limited, the largest private thermal power producer in India, registered a decrease of 35.02 per cent in its share price during the review period. The company’s income stood at Rs 278.41 billion in 2019-20, an increase of 5.61 per cent from Rs 263.61 billion in 2018-19. Its net loss stood at Rs 22.74 billion in 2019-20 as against a net loss Rs 9.84 billion in 2018-19. It has an operational thermal power portfolio of 12,410 MW across six projects, as well as a 40 MW solar power project in Gujarat. Its under-construction portfolio includes a 1,600 MW ultra supercritical thermal power project at Godda, Jharkhand, which is dedicated to the export of power to Bangladesh and has achieved financial closure. The average PLF achieved during 2019-20 was 68 per cent as against 64 per cent during 2018-19, while the total generation stood at 69.1 BUs in 2019-20 as compared to 58.5 BUs in 2018-19. The company has concluded the acquisition of two operational power projects, the 1,370 MW Raipur Energen Limited and 600 MW Raigarh Energy Generation Limited projects. In the first quarter of 2020-21, Adani Power signed a definitive agreement to acquire a 49 per cent stake in the Odisha Power Generation Corporation from the affiliates of the AES Corporation, a US-based global energy company, for a rupeee equivalent of $135 million. 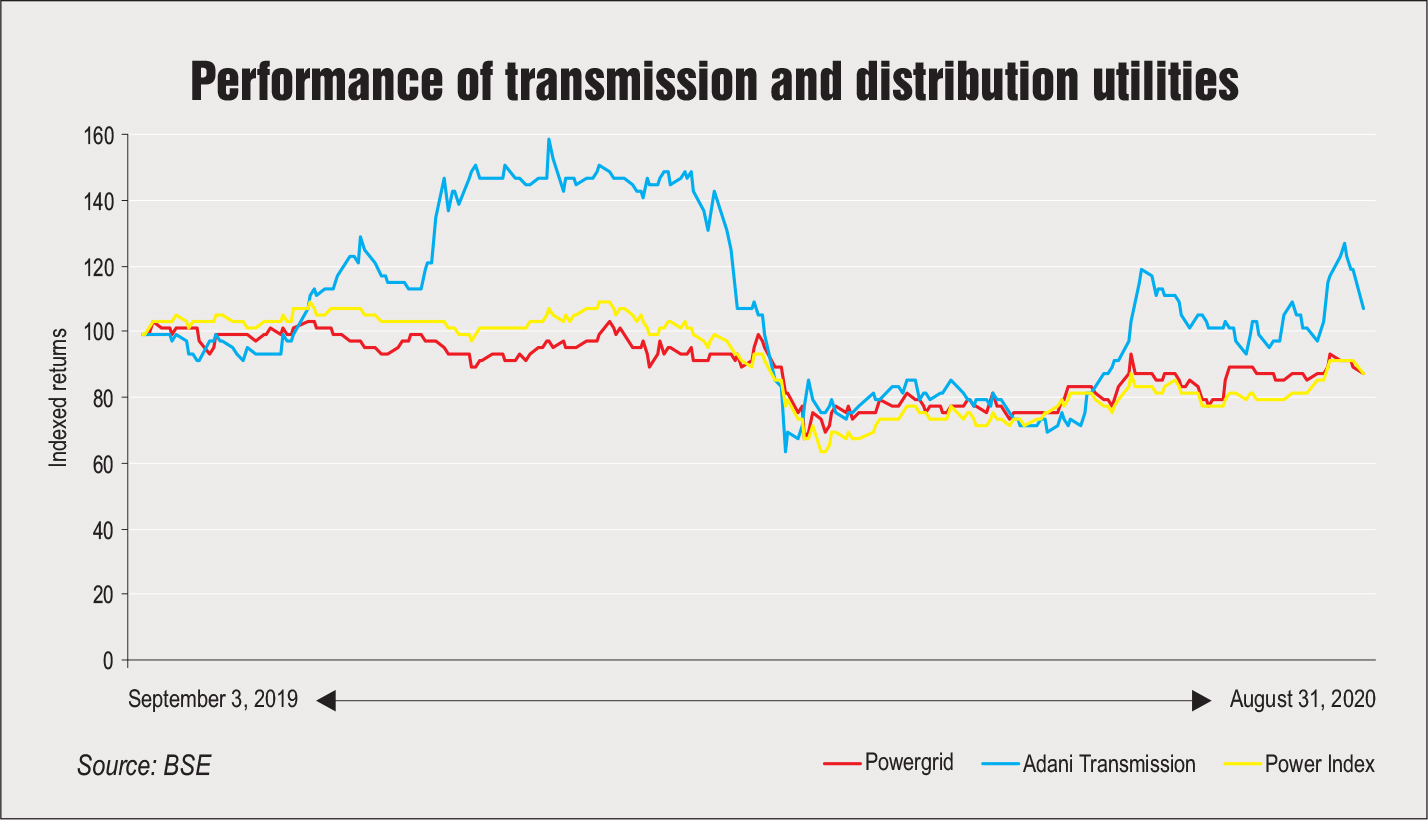 CESC Limited witnessed a decline of 21.35 per cent in its share price in 2019-20. The company’s total generation stood at 6,137 MUs as compared to 6,298 MUs in 2018-19, recording a decrease of 2.55 per cent. CESC has three generating stations with a cumulative capacity of 1,125 MW at the Budge Budge Southern and Titagarh stations. In addition, Haldia Energy, CESC’s subsidiary, operates a 600 MW generating station at Haldia. During 2019-20, the total generation from these plants stood at 10,567 MUs. The company’s existing distribution operations include a distribution licence for Greater Noida (Uttar Pradesh); three distribution franchises in Kota, Bharatpur and Bikaner in Rajasthan; and a new DF in Malegaon, Maharashtra, which commenced operations in 2019-20. The company’s consolidated income stood at Rs 112.17 billion in 2019-20 as against Rs 108.68 billion in 2018-19, registering an increase of 3.2 per cent. Moreover, the PAT increased by 9 per cent, jumping from Rs 11.98 billion in 2018-19 to Rs 13.06 million in 2019-20.

During the review period, Torrent Power’s share price increased by 21.93 per cent. The company’s total income rose by 3.58 per cent, from Rs 133.4 billion in 2018-19 to Rs 138.18 billion in 2019-20. The net profit increased by over 30 per cent to stand at Rs 11.78 billion in 2019-20 as compared to Rs 9.03 billion in the previous year. The company’s total generation capacity during 2019-20 stood at 3,897 MW spread across thermal and renewable generating assets. During 2019-20, the net generation and PLF of AMGEN’s thermal assets stood at 2,112 MUs and 72.9 per cent respectively, while for SUGEN the figures were 5,870 MUs and 59.89 per cent respectively. The UNOSUGEN and DGEN projects did not operate during the year, primarily because of want of demand. The company operates as a power distribution licensee in the cities of Ahmedabad, Gandhinagar, Surat and Dahej and as a power distribution franchisee in the cities of Bhiwandi and Agra. During 2019-20, a favourable judgement was passed by the Appellate Tribunal for Electricity in respect of entitlement of the carrying cost on regulatory gap for earlier years, pursuant to which the company accrued an income of Rs 1.65 billion (net of tax) in its financial statements.

Transmission and distribution (T&D) companies – Power Grid Corporation of India Limited (Powergrid) and Adani Transmission Limited (ATL) – reported a marginal negative return (unweighted) of 0.5 per cent. India’s largest power transco, Powergrid’s stock witnessed a 9.14 per cent decrease in 2019-20. The company’s consolidated income stood at Rs 386.7 billion during the period as compared to Rs 356.61 billion in 2018-19, registering an increase of 8.43 per cent. Its profit increased by 10.21 per cent to stand at Rs 110.59 billion in 2019-20 as against Rs 100.34 billion in 2018-19. During 2019-20, Powergrid added 4,984 ckt. km of extra high voltage transmission lines, 37,987 MVA of transformation capacity and three new substations. With these, the total transmission assets have increased to 163,282 ckt. km of interstate transmission lines and 248 substations with a transformation capacity of 409,899 MVA. The important projects commissioned during the year included the ± 800 kV Champa and Kurukshetra HVDC Station Bipole 2 (Poles III and IV), which increased the interregional power transfer capacity of the country by 3,000 MW; and the 765 kV D/C Ajmer-Bikaner-Moga, 400 kV S/C Singrauli-Allahabad, and 400 kV D/C Nabinagar II-Patna lines. These assets added about Rs 203.2 billion to the gross block of the company. The capital expenditure during the year was Rs 153.13 billion against the target of Rs 150 billion. The company achieved a transmission availability of 99.82 per cent during 2019-20, with the number of trippings per line contained at 0.39.

Private major ATL showed an increase of 8.14 per cent in its share price during the review period. The company’s consolidated income stood at Rs 116.81 billion in 2019-20 as compared to Rs 75.6 billion in 2018-19, recording a 54.51 per cent increase. Meanwhile, the PAT increased from Rs 5.59 billion in 2018-19 to Rs 7.06 billion in 2019-20. ATL owns around 11,576 ckt. km of electric transmission lines with a total transformation capacity of 18,330 MVA. Further, it has about 14,740 ckt. km of transmission lines and substations with a transformation capacity of 25,780 MVA under execution and operation. The company’s transmission network availability stood at 99.76 per cent in 2019-20. The company has received a letter of intent from Maharashtra State Electricity Transmission Company Limited for the 400 kV Kharghar Vikhroli Transmission Private Limited project. In July 2020, the company signed a share purchase agreement with Kalpataru Power Transmission Limited for the acquisition of Alipurduar Transmission Limited.

The stocks of power equipment players, including BHEL, ABB India, Thermax, Siemens India and KEC International, registered a negative return of 8.42 per cent (unweighted) during the review period.

Hitachi ABB Power Grids registered a decrease of 28.6 per cent in its share price during the period under consideration. As per the latest available annual results, during 2019 (January-December), its orders reached Rs 69.7 billion as against Rs 67.29 billion in the previous year, a growth of 3.58 per cent, on account of technology deployment and continued traction in transportation and renewable energy. The company’s revenue from operations registered a growth of 9.34 per cent in 2019 with a total revenue of around Rs 73.15 billion as against Rs 66.9 billion for the same period in 2018. The net profit for the year 2019 was Rs 3.03 billion, a 40.58 per cent decline from the net profit of Rs 5.1 billion recorded in 2018.

The disruption caused by the Covid-19 pandemic affected performance in the latter half of March 2020, leading to lower profitability and revenues. That said, the situation is evolving, with no clear visibility on the extent and likely duration of impact on the power sector. This could dampen the already poor investor sentiment in the sector and lead to a slowdown in the flow of new investments into the sector.

That said, the sector’s health is expected to improve on the back of recently announced reforms. The mandatory enforcement of a payment security mechanism under PPAs, the privatisation of discoms in union territories and the direct benefit transfer of subsidiaries, together with the Rs 900 billion liquidity infusion package announced to enable discoms to clear their outstanding dues, should benefit the performance of power companies across the value chain as they grapple with the crisis.