The Adani Group has built a strong presence in the renewable energy sector, establishing subsidiaries such as Adani Green Energy Limited (AGEL) and Adani Solar. The group has been involved in almost all aspects of the renewable power business, including module manufacturing; engineering, procurement and construction; setting up of wind masts for assessing potential; and development and operation of solar, wind and hybrid projects. Recently, Adani became the largest solar power developer across the world in terms of project capacity by winning the Solar Energy Corporation of India’s (SECI) tender to develop solar plants with a cumulative capacity of 8 GW and module manufacturing for 2 GW.

The Adani Group entered the solar power segment as early as in 2011, with a 40 MW solar power project in the Kutch region of Gujarat. However, AGEL established its first solar project in 2015 and had completed only two solar projects till 2017. The company went public in 2018, and following the restructuring of the group, Adani Enterprises Limited (AEL) became responsible for executing the group’s solar and wind power projects through its unit, AGEL.

AGEL, part of the diversified Adani Group, develops, builds, owns, operates and maintains utility-scale grid-connected solar and wind farm projects. The company was publicly listed in 2018 and has since created a strong foothold in the renewable energy space. Its business model focuses on long-term contracts with investment-grade counterparties, large-scale projects, global partnerships and acquisitions. The business model has been successful so far, and Adani will continue on this path for the coming few years. Adani is committed to increasing its environment, social and corporate governance footprint by realigning its businesses with climate protection goals and increasing community outreach through its Corporate Social Responsibility programme.

Earlier this year, Adani signed an MoU with the Rajasthan state government to jointly set up solar parks, comprising solar power projects and a manufacturing unit, in Rajasthan. The Adani Renewable Energy Park has two land parcels of about 8,125 acres near Pokhran in Jaisalmer. However, the Rajasthan High Court has temporarily stayed its 1,500 MW project in Rajasthan due to land acquisition issues with local farmers.

Adani Renewable Energy Park (Gujarat) Limited, a wholly owned subsidiary of AGEL, also won a bid for setting up 130 MW of ISTS-connected wind power capacity under a tender issued by SECI in 2019. Recently, Adani Green also awarded a contract to Siemens Gamesa to supply turbines for a cumulative 473 MW of wind power capacity to be developed in Rajasthan. Siemens Gamesa has signed several projects with Adani, adding up to 391.2 MW. Of this capacity, 87.6 MW has already been commissioned while the remaining capacity is under construction. Further, Adani is exploring projects in the wind-solar hybrid category. In 2019, the company won 600 MW of wind-solar hybrid projects under SECI’s ISTS tender.

Adani’s strategy for future development is based on large-scale expansion with project sizes of 1 GW or higher. The company’s strategy will also build on a multiple resource model, incorporating solar, wind and storage. Hybrid projects have much higher capacity utilisation, thus removing the intermittency challenge. Such projects also enjoy the additional benefit of cost reduction as a result of sharing transmission lines. Adani intends to establish strategic partnerships with original equipment manufacturers (OEMs) to create customised solutions for consumers as well as support local vendor development. By scaling up its operations, the company looks to achieve economies of scale in construction and OEM. 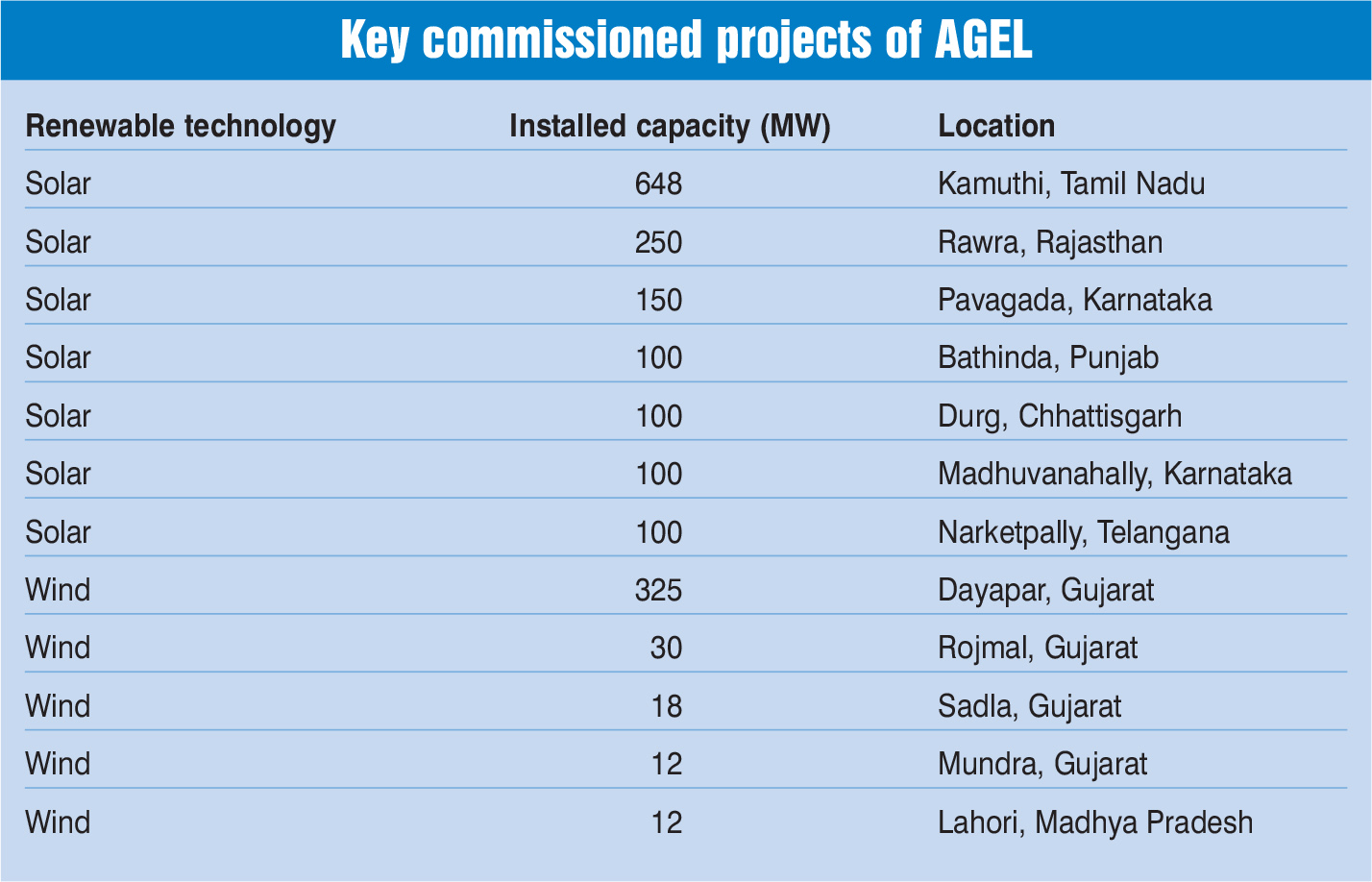 Adani is making significant progress in building its financial base. With Adani emerging as the largest solar developer, AGEL’s shares surged over 7 per cent to hit an all-time high of Rs 531.95 apiece on the Bombay Stock Exchange on September 2, 2020. This reflects a stable financial state. Further, AGEL has also reported a net consolidated profit of Rs 217.5 million for the quarter ended June 30, 2020. The company had announced a net loss of Rs 974.4 million in the corresponding quarter of the previous year. In April 2020, Total, through its subsidiary, invested around Rs 3.7 billion for a 50 per cent stake in a joint venture with AGEL, which houses 2.148 GW of operating solar projects across 11 states in India. AGEL also plans to raise up to $12 billion by selling green bonds over the next four to five years. The company expects to raise $2 billion-$3 billion annually from the sale of these green bonds. The sale of the green bonds is likely to start in May 2021 and the proceeds will be used for the production of non-conventional energy.

The SECI tender has pushed Adani closer to its target of achieving an installed renewable generation capacity of 25 GW by 2025. To meet this target, it has committed an investment of Rs 1,120 million for the next five years. So far, Adani’s renewable projects have not been severely impacted by the pandemic and have maintained smooth operations in spite of a nationwide lockdown. The company expects to develop a capacity of about 1.5 GW in the pipeline for financial year 2021. Adani also plans to fast-track its asset acquisitions in the coming year. These include 205 MW of operating solar assets from the Essel Group and 150 MW of wind assets from Inox Wind.

Although Adani Green has a significant project pipeline, the company’s installed capacity is lower than that of its competitors. Of its total project portfolio of nearly 15 GW, less than 3 GW of renewable energy capacity is currently operational. Going forward, Adani will have to face implementation hurdles for its upcoming projects. The company has an advantage in the renewable energy sector in terms of supply chain due to its diversified presence in the manufacturing, and transmission and distribution verticals. As the supply chain issues get resolved in the coming months, the company will focus on the timely completion of all under-construction projects.