Madhya Pradesh is one of the first states to provide 24 hour power supply to all electricity consumers in the state. Contributing to its effort to ensure 24×7 power supply is Madhya Pradesh Poorv Kshetra Vidyut Vitaran Company Limited (MPPKVVCL), one of the state’s three power discoms, which undertakes the distribution of electricity in the eastern part of the state. The company started operations independently in 2005 and currently serves more than 6 million consumers. The discom has grown its power distribution infrastructure substantially in the past few years. While its aggregate technical and commercial (AT&C) losses continue to be high, it has been taking initiatives to achieve efficiency in providing quality electricity supply services to its customers, including plans to implement a direct benefit transfer (DBT) pilot by the end of this year.

The AT&C losses of the discom have come down from 30.57 per cent in March 2019 to 25.8 per cent in March 2020. Similarly, distribution losses have come down from 30.57 per cent to 22.52 per cent. The discom has undertaken a range of initiatives to control meter tampering and power theft. It has replaced electromechanical meters with static electronic meters and intelligent meters. In addition, single-core service lines have been replaced with twin-core armoured cables.

As per PFC’s latest report on the audited financial results of discoms, MPPKVVCL reported a gap of Rs 2.17 per unit in 2018-19 on an energy sold basis, excluding regulatory income and the Ujwal Discom Assurance Yojana (UDAY) grant, compared to Rs 1.71 per unit in the previous year. The company incurred a loss of Rs 35.41 billion (on a subsidy received basis) in 2018-19, compared to a loss of Rs 21.82 billion in the previous year. The discom’s power purchases are managed by the holding company, MP Power Management Company Limited. The per unit cost of power for the company in 2018-19 was Rs 4.55.

Due to the effect of the Covid-19 pandemic, the company’s overall demand has come down significantly. Also, for the last one week of March 2020 and most of April 2020, revenue collection was impacted, as bill raising and collection  were a challenge. As a result, average billing had to be done for consumers. However, the demand from all consumer segments is now returning to the pre-Covid levels.

The discom also undertook various measures to ensure the safety of its staff and personnel by providing masks, sanitisers, etc. across all its offices. It also appealed to consumers to not visit its office for bill payments and make these online instead. For registering complaints too, they were requested to use the call centre service rather than visit the office physically. The discom facilitated consumer services through a mobile application, “Smart Bijlee”, which allows users to make payments, submit complaints, or apply for a new connection while sitting at home. All the staff and officers of the company donated one day’s salary to the Prime Minister’s Relief Fund for the fight against the coronavirus.

Regulatory relief had been provided to consumers for the months of March, April and May (by way of fixed charges deferment for industrial consumers for the month of March and relief under state government schemes for domestic consumers belonging to economically weaker sections). The discom plans to recoup this relief amount from November 2020 onwards. Although it is not possible to forecast how much will be recouped, it is expected that 60-70 per cent of the amount will be recovered.

The total planned capex by the discom for 2020-21 is Rs 6.36 billion, based on its tariff filings with the state regulator. The planned capex involves an investment of Rs 2.77 billion in system strengthening and Rs 2.00 billion under the Smart Metering Project. The discom is undertaking various projects with a focus on the creation of new 33/11 kV substations, bifurcation of overloaded 33 kV feeders, feeder bifurcation of agricultural feeders at the 11 kV level, augmentation of power transformers, installation of distribution transformers, conversion of bare LT lines into aerial bunched cables and replacement of service lines.

On the metering front, over the next four to five months, 15,000 consumers are planned to be covered under smart meters. The overall target over the next two years is to bring 350,000-400,000 consumers under smart metering. These consumers belong to the higher consumption consumer category (those who consume 400-500 units per month) as well as high-loss areas. This initiative is expected to improve billing efficiency, thus cutting down losses.

The discom also participated in the UDAY scheme and committed to reducing AT&C losses in a targeted and time-bound manner. The AT&C loss was expected to come down to 19 per cent this year and to 15 per cent in the next two years. However, this year the target might be affected by 2-3 per cent, notes the discom. 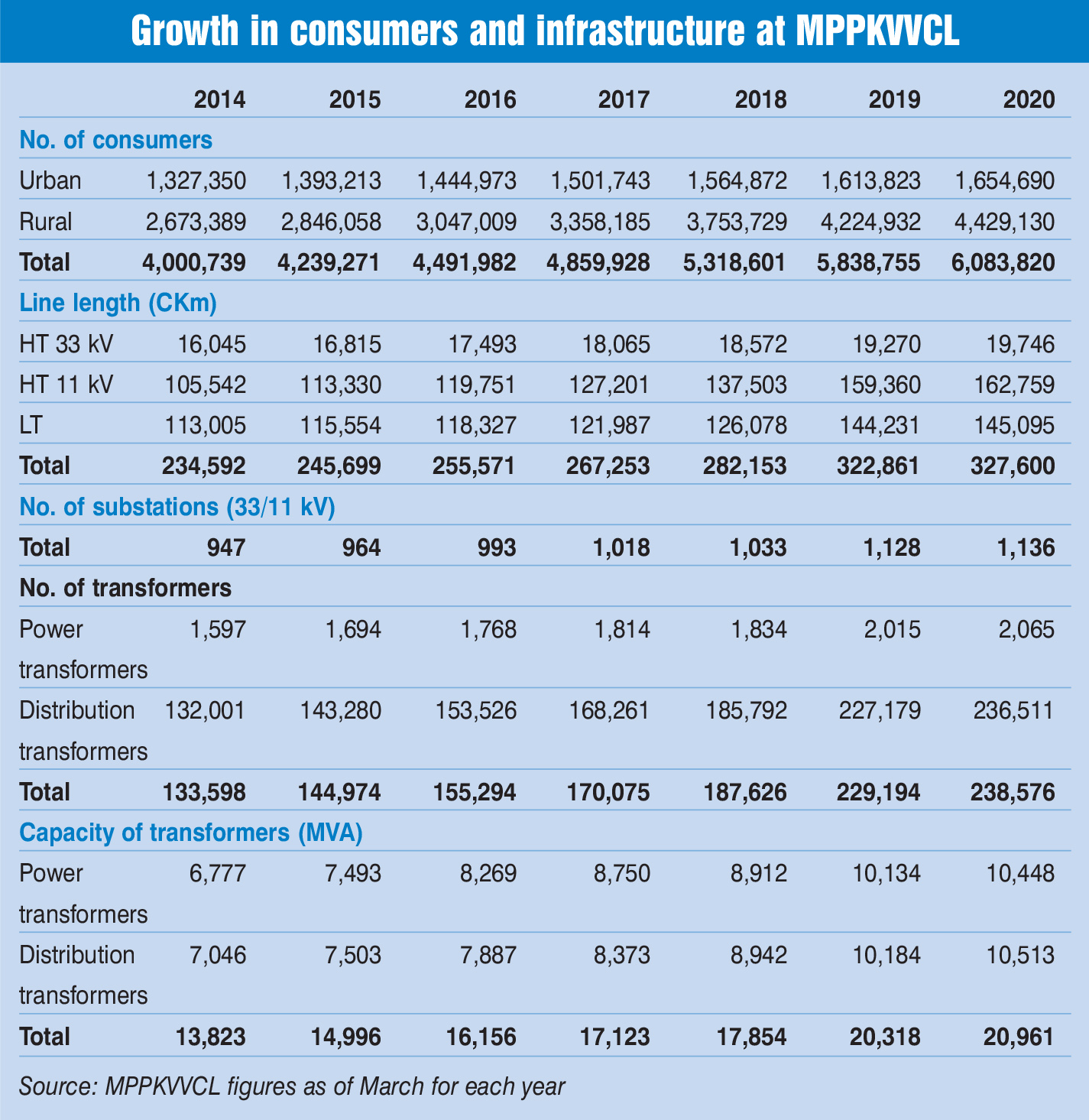 The company’s outlook on demand growth is robust. Since the majority of the load for the discom comes from agricultural consumers and the demand from this sector has not taken a hit, the growth in demand is not likely to be affected much, going forward. The expectation is that it will continue to grow, as it has in the past couple of years.

The company is also planning to implement DBT, especially for agricultural consumers, with the subsidy amount expected to go directly into farmers’ accounts. It has also identified a district for the DBT pilot, which is expected to be done by December 2020.

That said, certain challenges remain. According to the Seventh Annual Integrated Ratings of State Discoms, MPPKVVCL received a rating of C+. Some areas where action can be taken, as per the report, include improvement in billing and collection efficiency to bring down the AT&C losses, rationalisation of employee cost and improvement in cost coverage through suitable tariff revision and curtailment of losses.