In order to minimise the harmful impact of emissions, the thermal power industry is now increasingly using particulate matter (PM) control equipment and technologies, which are designed to remove particulates from the flue gas stream, prevent them from re-entering the flue gas and release the collected residue. There are various types of emission control devices that can be used in power plants. These include electrostatic precipitators (ESPs), fabric filters, cyclone separators and high temperature high pressure (HTHP) particulate control solutions. These help thermal units to meet the high efficiency and high reliability requirements mandated by the government.

In December 2015, the Ministry of Environment, Forest and Climate Change (MoEFCC) issued PM control norms for the coal-based thermal power sector. The PM standards have been fixed at 100 milligram per normal cubic metre (mg per Nm3), irrespective of plant capacity, for plants older than December 2003, which comprise the first category. In the second category, that is, units installed after 2003 till December 31, 2016, the PM standards have been fixed at 50 mg per Nm3. TPP units established after January 1, 2017 have to conform to PM standards of 30 mg per Nm3.

The revised environmental norms require several existing TPPs to upgrade their ESPs to control PM emissions. Even though most of the power plants have already installed ESPs, there are concerns over their efficacy and operational performance since Indian coal has a high ash content which leads to a significant generation of PM. This means that upgraded systems could be required for the existing plants. In addition, the recent decision by the environment ministry to do away with coal washing makes it even more important for TPPs to invest in efficient PM control technologies. (The MoEFCC had earlier issued guidelines whereby power stations located between 500 km and 1,000 km of a coal mine should procure coal with ash content not exceeding 34 per cent on a quarterly average basis from January 1, 2016. In a recent notification, the centre has decided to do away with this requirement.)

A review of the implementation status of pollution control measures for the control of PM in TPPs in the NCR as of June 30, 2020 showed that out of a total capacity of 12,790 MW, plants with an aggregate capacity of 7,380 MW had already complied with the statutory limits.

The country’s largest power generator, NTPC Limited has taken major steps in ESP augmentation and has already planned/undertaken extensive renovation and modernisation (R&M) of ESPs in units installed before 2003. Further, the company has identified 94 units requiring R&M implementation. As of now, 53 units of the company, out of a total capacity of 15,320 MW, have implemented R&M of ESPs commissioned before December 31, 2003. For units commissioned after December 31, 2003, only two have completed its implementation. 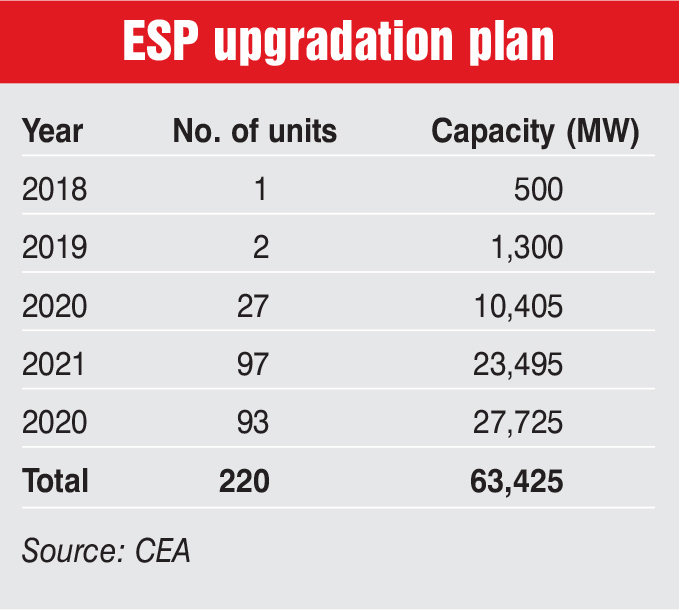 ESPs are the most commonly used particulate emission control equipment in coal-based power generation plants. An ESP electrically charges the ash particles in the flue gas stream to collect and remove PM. It uses a series of parallel vertical plates that contain electrodes to create an electric field through which the flue gas passes and the particles are separated. A well-designed ESP is characterised by high collection efficiency, high reliability, low flue gas pressure loss, resistance to moisture and temperature upsets, and low maintenance. Its collection efficiency is very high at 99-99.99 per cent for a particle range of 0.01-100 micrometre (µm). However, it does not work well for fly ash with high electrical resistivity. Since Indian coal produces fly ash, it is very difficult to precipitate and this often limits the collection efficiency of ESPs. In this context, the conditioning of fly ash in the flue gas is an established technique that is used to restore the performance of an ESP in coal-based power plants that produce high-resistivity fly ash resulting from burning low-sulphur fuels.

A cyclone separator is a device that applies centrifugal force to separate suspended particles from the flue gas stream. The coarser particles are moved towards the cyclone separator wall due to the applied centrifugal force. Various industries use these devices because of inherent advantages such as simple structures, low cost, less space requirement and capability to withstand high temperature and high pressure conditions.

Wet scrubbers for particulate control capture fly ash in addition to sulphur dioxide. The most widely used wet scrubber is the venturi scrubber, in which water is injected into the flue gas stream at the venturi throat to form droplets. Fly ash particles react with the droplets to form a wet by-product, which is then disposed of. The venturi scrubber has a removal efficiency of 90-99.9 per cent for a particle size range of 0.5-100 µm. However, if the particle size is less than the specified range, the system efficiency drops. Most wet particulate scrubbers are designed to control both sulphur dioxide and particulates by utilising alkaline fly ash as a sorbent.

Among all particulate control devices, ESPs are the most widely deployed in TPPs. However, the fly ash generated by Indian coal comprises sulphur and alkali, resulting in high resistivity, which hampers ash collection by ESPs. Going forward, new techniques to collect high-resistivity fly ash can be adopted. These include gas temperature control, intermittent energisation, wide-pitch electrodes, pulsed power supply or semi-pulsed operation, conditioning of flue gas, and changing the properties of coal by blending it with sulphur and high-heat-value coal.

Given the increasingly stringent environmental regulations, developers need to explore appropriate particulate emission control devices and technologies for their TPPs.