The coal-based thermal power industry is responsible for a significant share of emissions by the country’s industrial sector. The combustion of coal converts nitrogen bound in coal to form products such as nitric oxide (NO), nitrogen dioxide (NO2) and nitrous oxide (N2O). These products are collectively called oxides of nitrogen (NOx) – a major pollutant. The NOx norms for thermal power plants (TPPs) have recently been revised. The Supreme Court allowed a relaxation of NOx norms for TPPs installed from 300 mg per Nm3 to 450 mg per Nm3. The Ministry of Power (MoP) had proposed revising norms as TPPs were unable to meet the existing limit (of 300 mg per Nm3 and below) at varying load conditions.

In terms of technologies, NOx emissions could be limited to 300-600 mg per Nm3 by using one or more primary methods involving combustion modification techniques that restrict NOx generation. However, to achieve 100-300 mg per Nm3 emission levels, advanced control techniques such as selective catalytic reduction (SCR) and selective non-catalytic reduction (SNCR) are required.

The environmental norms notified by the Ministry of Environment, Forest and Climate Change (MoEFCC) in December 2015 prescribed NOx emission levels for TPPs in the country. Prior to this, there were no stipulated limitations on NOx emissions. As per the norms, the NOx emission limit for TPPs installed before December 31, 2003 was set at 600 mg per Nm3; for TPPs installed after January 1, 2004 and up to December 31, 2016, at 300 mg per Nm3; and for TPPs installed from January 2017 onwards, the emission limit was 100 mg per Nm3. In a recent development, the Supreme Court has allowed power stations commissioned between December 2003 and 2016 to emit 450 mg per Nm3, following the in-principle approval given by the MoEFCC in 2019 to revise the norms from 300 mg per Nm3 to 450 mg per Nm3. Further, the Central Pollution Control Board monitored emissions at seven of NTPC’s power plants for a specific period and results were found to be in line with the MoP’s observations.

For curtailing NOx emissions, various technologies are available that can help in the reduction of these levels. These include SCR and SNCR systems, and over fire air (OFA) systems and low NOx burners (LNBs).

OFA and LNB are already being used in India, but they are capable of reducing NOx emissions of only up to 600 mg per Nm3. According to a study by the Centre for Science and Environment, primary combustion measures control and limit the production of NOx from the combustion zone by promoting its reduction to nitrogen. These are relatively low-cost NOx control technologies and can be implemented quickly. Equipment manufacturers point out that plants commissioned after 2000 already have some form of in-combustion NOx control. The following are some of the most widely used technologies for NOx control that have been identified by technology suppliers as suitable for high ash Indian coal.

The NOx limit for new plants is 100-300 mg per Nm3, for which post-combustion denitrification systems such as SCR and SNCR are required. However, they have not yet been proven suitable for the Indian coal, which has a high ash content.

SCR systems also require ammonia as a denitrification agent (about 2,500 tonnes per year for a 500 MW unit). The arrangement for availability, transportation, handling and storage of such large quantities of ammonia is yet to be addressed by gencos. Various pilot studies are being undertaken to understand the performance of SCR and SNCR systems in the Indian context. The findings of these pilot projects will play a significant role in determining a suitable technology solution for reducing NOx emissions. 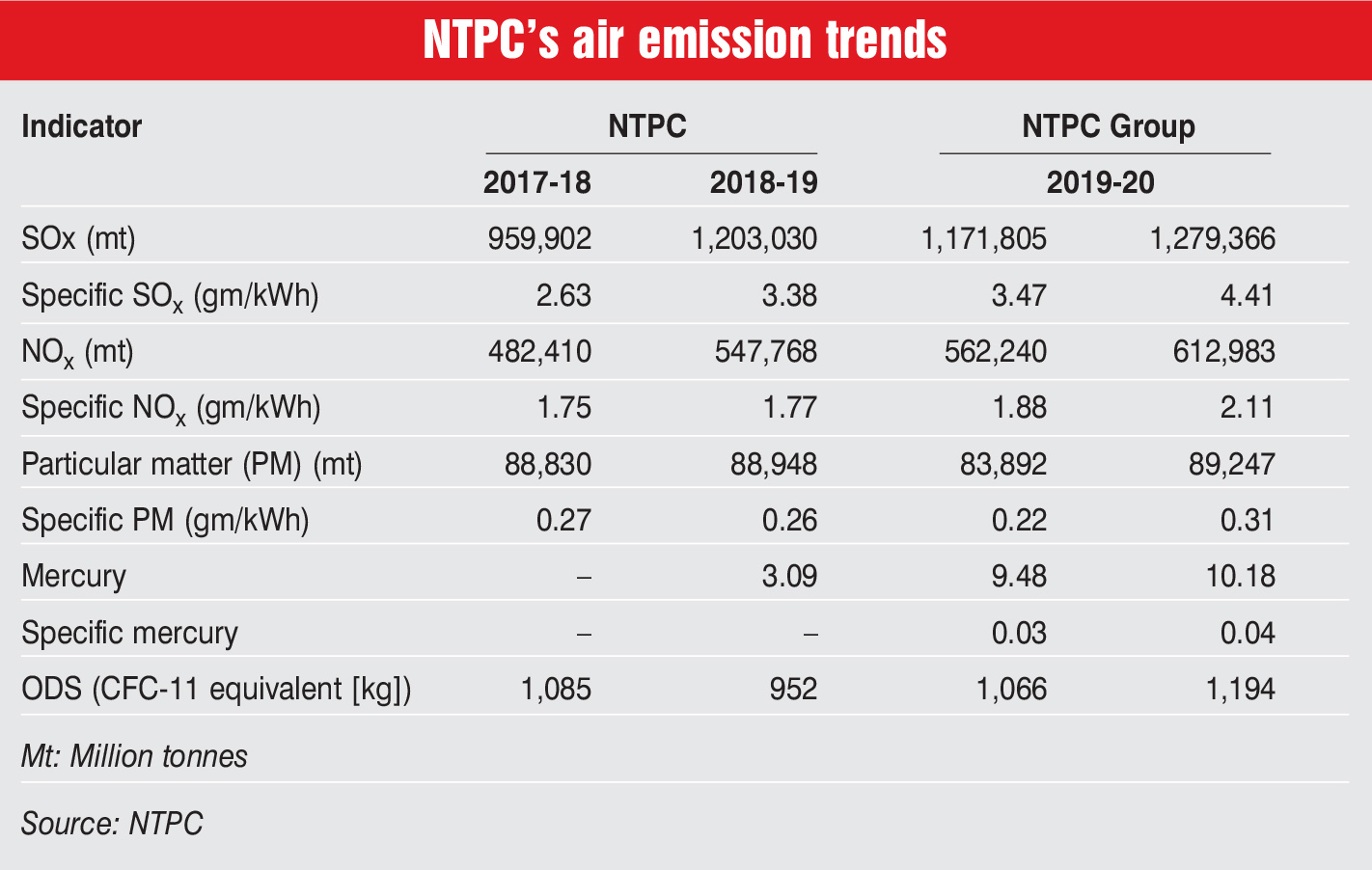 NTPC’s NOx control in coal-fired plants is currently achieved by controlling its production by adopting best combustion practices (primarily through excess air and combustion temperature optimisation). Under NTPC’s de-NOx action plan, combustion modification has already been implemented at five units aggregating 2,480 MW. These include five units consisting of two units of Dadri, two units of Jhajjar and one unit of the Vindhyachal super TPP. To further reduce NOx emission levels, to the extent possible combustion modification is at various stages of execution at 44 GW of capacity. For low-NOX combustion systems, contracts have been awarded for 18 GW of capacity.

Under the guidance of the MoP, NTPC set out to test SCR/SNCR technologies at 11 locations of its units on a pilot basis to assess the viability of these technologies for Indian coal. It has been found in trials that NOX reduction achievable from combustion modification is in the range of 450-750 mg per Nm3. For SNCR technology, NOX reduction is in the range of 20-30 per cent only. Further, it was found that while NOX reduction of around 80 per cent is achievable, it is not consistent due to part-load operation of power plants.

Recently, in July 2020, UP Rajya Vidyut Utpadan Nigam Limited awarded a contract for setting up a combustion system modification for boilers, along with advanced firing system equipment to meet NOX emission norms for the Harduaganj, Parichha and Anpara plants. This is the first order for combustion modification for NOX control by any state utility in India.

Going forward, to meet the stringent NOX norms of 100 mg per Nm3, Indian power plants will need to install SCR/SNCR technology. Although plants have been given a deadline of 2022, none of them has installed this technology yet. A major concern facing the industry is the technological limitation in implementing de-NOX systems. Going forward, gencos should take firm steps to finalise their NOX control plans and start implementation at the earliest.