Singapore is a fine example of a country in the process of crafting its unique path to a low-carbon future, with greener power. The island-nation is one of the world’s eight economies without energy resources of its own, which relies on liquefied natural gas (LNG) for 95 per cent of its power generation, a reality that is here to stay. The country imports natural gas from Malaysia and Indonesia through piped networks, and also in a liquefied state from around the world via the Singapore LNG terminal launched in 2013. In the current scenario, while the country aims to diversify this gas supply, it also has a vision for alternative energy supply.

Solar photovoltaic (PV) is the only cost-effective and reliable renewable energy source that has a potential to make an impact on Singapore’s energy grid. The Singapore government has committed to raising the installed capacity of grid-connected solar energy from 71 MW in the first part of 2016 to 350 MW by 2020. Singapore is targeting to add 2 GW of solar capacity by 2030, which will be equivalent to 10 per cent of Singapore’s current daily peak electricity demand. The government is determined to support solar PV through the SolarNova programme and rooftop solar deployment. Meanwhile, the Housing and Development Board (HDB), which has announced several successful tenders already, plans to install solar PV on 50 per cent of HDB rooftops over the coming years. The nation is currently on track to reach a target of 350 MW to be deployed by 2020, as it is also considering setting up of Zero Energy Buildings.

To achieve the above-stated goals, Singapore is focusing on exploring energy storage solutions as geographic and climatic conditions, as well as a dense urban landscape limit its capacity to add solar or other renewable energy sources extensively to its energy portfolio. In addition, Singapore’s difference between peak and trough within the daily cycle can be as much as 30 per cent, requiring extra infrastructure capacity to meet the peak demand. The use of energy storage to balance peak and trough demand, could save substantial infrastructure costs. In view of this, Singapore is planning to add 200 MW of energy storage capacity beyond 2025. The country also envisages exploration of a regional power grid, emulating parts of Europe, where it could sell excess power to its neighbouring countries.  Apart from this, Singapore’s government is placing a significant bet on electric vehicles (EVs), virtual power plants (VPPs), along with several research and development (R&D) initiatives. The efforts are aimed at achieving a successful transition to a low-carbon and low-emission economy for fighting climate change.

This phased liberalisation of the electricity market in Singapore, which reached the retail segment over the past year, has engendered new market structures and business models. Players from other business sectors, such as telecommunications, have entered the power retail business. This is likely to continue in view of the emergence of a new breed of digitally driven companies that cut across traditional boundaries between various utility services and domains of different government agencies.

Electricity generated is delivered to consumers through the national power grid, operated by the SP Group, via its member, SP PowerGrid. SP PowerGrid is the agent appointed by the transmission licensee, SP PowerAssets, to build and maintain the power grid. Electricity retailers and SP Group, via its member the SP Services, buy electricity in bulk from the WEM to supply to consumers. SP Services is the Market Support Services Licensee. 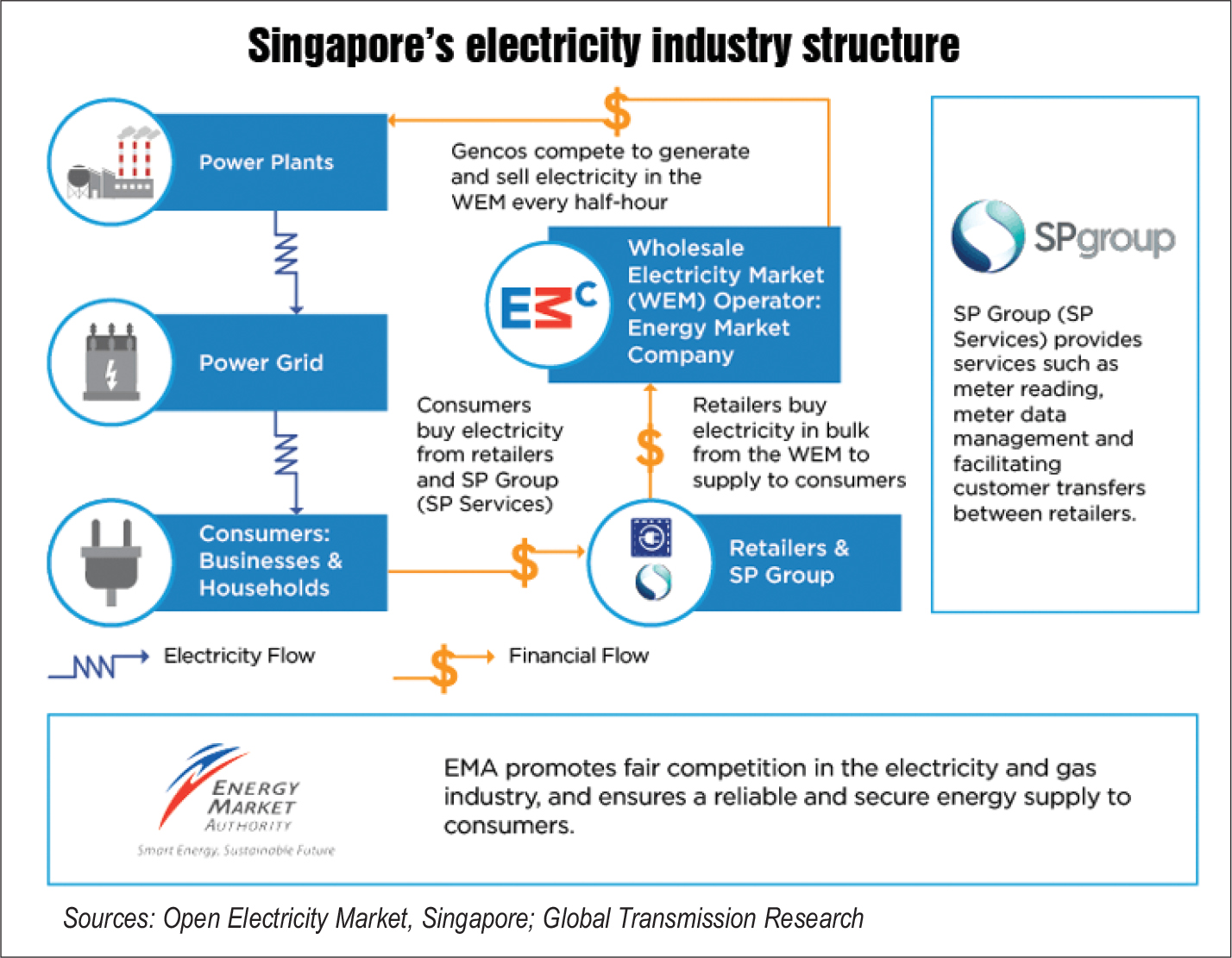 The Singapore government has set aside an amount of SGD 49 million for R&D in the low-carbon energy sector. A major initiative recently taken is to pilot a lithium-ion battery energy storage project on a “floating” lab, utilising seawater to cool the battery cells. This energy storage system is driven by Singapore’s efforts to transform the energy landscape and deploy 200 MW of storage systems beyond 2025.

The EMA has awarded a research grant to test a floating energy storage system to a consortium led by Envision Digital International as part of a SGD 10 million partnership with Keppel Offshore and Marine Limited (Keppel O&M) to develop energy solutions in the marine sector. The test would perceive the deployment of a 7.5 MW lithium-ion battery ESS on Keppel O&M’s floating living lab and is believed to have the capacity to power more than 600 households per day.

In October 2020, the EMA installed its first utility-scale energy storage system at a substation in Woodlands. The system was jointly funded by the EMA and the country’s electric utility SP Group, and implemented by a consortium comprising a local solar energy firm, Sunseap Energy Ventures, local Nanyang Technological University (NTU) and Finnish energy solutions provider Wartsila. The energy storage system aims to mitigate the intermittency challenges faced by the solar system by storing the solar power available in the area. It has been designed for local conditions to enable incorporation of a greater amount of renewable and other sustainable energy solutions into the electricity grid. This initiative is considered critical to analyse the contribution of energy storage infrastructure in supporting Singapore’s target of at least 2 GW peak of solar deployment by 2030.

Singapore is hoping to witness the phasing out of internal combustion engine vehicles by 2040. This goal will accelerate EV adoption and the roll-out of more EV charging points. With the Singapore government’s target to increase solar penetration to reach 2 GW by 2030, integrating vehicle-to-grid (V2G) technology into the national grid can be the key to managing renewables’ intermittency, while maintaining grid stability and reliability.

With this background, the SP Group has recently announced a strategic investment in the US-based technology company The Mobility House AG (TMH) to explore smart charging (V1G) and V2G feasibility in Singapore. SP will leverage TMH’s expertise and technology in Europe and the US to boost Singapore’s electric mobility capabilities, enabling its energy system to integrate more renewable energy, and ultimately, mitigate climate change. TMH will provide a non-proprietary software for integrating EV batteries into power grids, using intelligent charging and storage solutions.

Singapore has an opportunity to take the lead in this new regulatory frontier with forward-looking energy policies and a multi-stakeholder approach. It has already set the course for encouraging partnership between people, and the private and public sectors or the so-called 3Ps of collaboration for climate action. For instance, the recent partnership between Sembcorp (Singapore’s largest home-grown international renewable energy player), the EMA and the NTU to develop Singapore’s first VPP is the right step in this direction. Using real-time information from a variety of Distributed Energy Resources, the VPP will optimise the power output of these resources located across the island. Energy fluctuations due to solar intermittency at different locations could be balanced automatically via the VPP. The VPP is also equipped with demand forecasting and optimisation algorithms that take into account Singapore’s power grid and market conditions.

The project is in line with the country’s objective of enabling more number of cleaner and distributed energy resources to be integrated into Singapore’s energy mix, while keeping its power system stable. The project is aimed at deepening Singapore’s supply mix and developing new customer-centric business models underpinned by digital platforms.

In August 2020, the SP Group announced that it will be embarking on SGD 30 million research and education initiatives with NTU Singapore, to enhance the resilience of Singapore’s electricity network, improve the reliability and efficiency of supply to consumers, and nurture experts for the energy sector. The collaboration will see the establishment of the SP Group-NTU Joint Laboratory to explore energy-related projects in the areas of asset management and network operations. Located on the NTU Smart Campus, the new joint lab will house 60 researchers, and 85 undergraduate and postgraduate students, and serve as a training platform for SP’s engineers.

Through the joint lab, for which SP is setting aside a SGD 20 million fund, new research topics will be identified to support SP’s vision to develop solutions for the Energy Grid of the future. In addition, SP is contributing SGD 10 million to NTU to set up two endowment funds at the university to support and groom next-generation experts in Singapore’s energy sector.

Singapore’s recent initiatives in the energy storage space look promising and are in line with the country’s objective of having a network of energy storage solutions across the island to manage the stability and resilience of the grid, as well as offering peak shaving services. However, the installation of 2 GW of solar PV projects by 2030 would require collaboration between the public and private sectors as well as breakthroughs in solar module efficiencies and vertical solar installations, given that Singapore lacks land availability and relies heavily on rooftop-based solar deployment.

In addition, the complexity and velocity of energy transitions in countries like Singapore demand a constant review of energy policies. Frameworks governing the power sector must be nimble and open to recalibration or harmonisation. In the move towards integrated green energy solutions, especially in the urban landscape, policymakers need to look into convergence across sectors to minimise the likelihood of conflicting or contradictory strategies. n