As the country moves ahead with industrialisation and urbanisation, there is expected to be significant waste generation. As per the Ministry of Environment, Forest and Climate Change, municipal solid waste generation across India will reach 0.45 million tonnes per day (tpd) by 2031 and 1.19 tpd by 2050. While this calls for better management of waste, it also results in simultaneous problems and opportunities. Disposal of waste can help produce energy when done through waste-to-energy (WtE) technologies such as incineration and biomass gasification. There is significant potential for energy generation from urban and industrial organic waste in India and, according to estimates, the generation capacity could be about 5,690 MWeq.

There are currently 216 WtE plants with an aggregate capacity of 370.45 MWeq in the country. These include plants that generate power, biogas or bio-CNG. While some projects are based on municipal solid waste (MSW), others recover energy from agricultural, urban and industrial waste. The technologies for recovery of biogas or power from such waste are well established and with sustained supply of feedstock and proper O&M, these plants can run efficiently. Andhra Pradesh has the highest cumulative installed capacity for converting waste to energy, which stands at 51.4 MWeq, followed by Uttar Pradesh (50.2 MWeq) and Telangana (49.9 MWeq). However, Tamil Nadu, with 35 plants, has the highest number of plants for a single state.

The Ministry of New and Renewable Energy (MNRE) is promoting various technology options available for setting up WtE projects. These technology options are for recovery of energy in the form of biogas and bioCNG, and electricity from agricultural, industrial and urban waste. WtE technologies include biomethanation, incineration, gasification and pyrolysis. The MNRE has an ongoing programme called Energy from Urban, Industrial, Agricultural Wastes/ Residues and Municipal Solid Waste for promoting energy generation from waste. In March 2020, the MNRE came out with revised guidelines for the programme, extending the validity of the programme to March 31, 2021. One new addition to the guidelines was the inclusion of MSW-based projects. The programme offers central financial assistance (CFA) in the form of capital subsidy and grants-in-aid for the installation of plants. Projects which intend to add capacity to the existing plants (WtE or biomass gasifier) shall also be considered for CFA.

The South Delhi Municipal Corporation   signed an MoU with Indian Oil and NTPC Limited in July 2020 to develop a demonstration WtE project at the Okhla landfill site in Delhi. The project will use gasification technology to process about 17,500 tonnes of refuse-derived fuel annually. Earlier, in 2019, NTPC Limited and the East Delhi Municipal Corporation formed a joint venture company to convert municipal waste into green energy. This was done by setting up a waste management and energy generation facility.

The Delhi Metro Rail Corporation has also been sourcing power from a 12 MW WtE project set up by East Delhi Waste Processing Company Limited in Ghazipur, Uttar Pradesh. In order to promote WtE projects and make them more viable, the Delhi Electricity Regulatory Commission, in January 2019, announced that WtE projects in the National Capital Territory of Delhi will be exempted from open access and deviation charges for intra-state scheduling. These exemptions will be applicable for the useful life of the existing projects, on future projects commissioned on or before March 31, 2022, and also on those for which power purchase agreements have been signed on or before March 31, 2022.

Another WtE project based on MSW is being set up in Shimla and trials to generate power were conducted in September 2020. The WtE plant has the capacity to generate 2 MW of electricity daily. Commissioning of the plant and power generation have been delayed due to Covid-19, according to the Shimla Municipal Corporation. The plant would require 100 tpd of waste generate electricity for the city. This requirement will be fulfilled by the waste produced in Shimla as well as in some of its neighbouring areas. In March 2020, Karnataka Power Corporation Limited floated a tender for an 11.5 MW WtE project at Bidadi in Ramnagar district of the state.

As an alternative to large-scale plants, states such as Kerala are following a unique approach to waste management. While the state has made significant efforts to manage waste, its strategy is focused on decentralised waste management and using waste to make organic manure for soil quality improvement. Recently, the district conference of the Kerala Sasthra Sahitya Parishad (KSSP) demanded that the Thrissur Corporation drop its proposed WtE project at Nadathara. The KSSP highlighted that the collection of waste at one place and its subsequent burning will lead to environmental and health hazards. 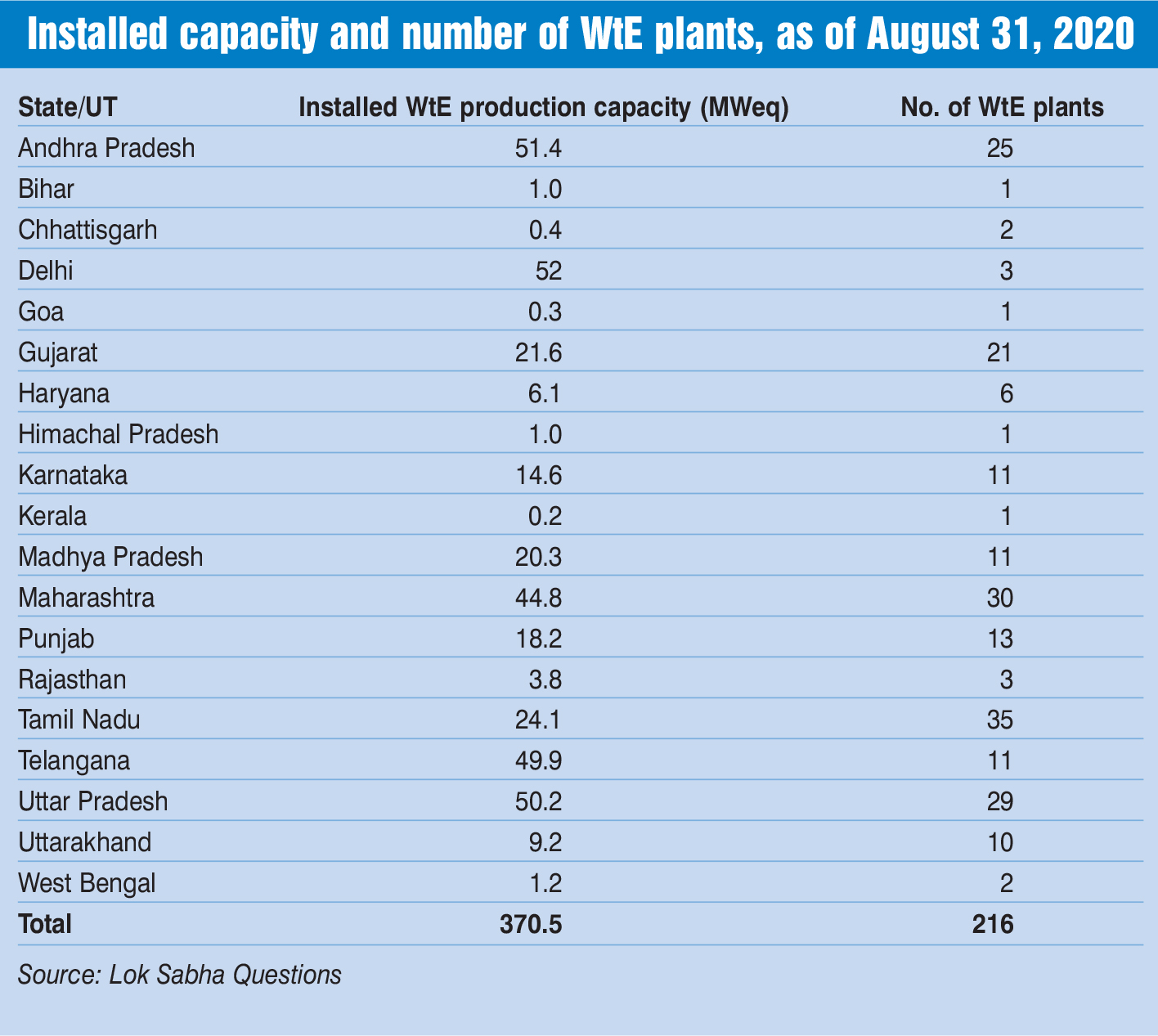 Since the 1990s, many WtE plants have been set up across the country; however, a number of them have shut down. The primary reasons for closure are the inability of the plants to handle mixed solid waste, and the high cost of the electricity generated by them, which renders it unattractive to power companies. WtE plants have often faced criticism for posing environmental and health hazards. Another example is the Okhla plant in Delhi which has faced widespread protest over the issue of pollution for years. In 2016, the National Green Tribunal had imposed a fine of Rs 2.5 million on the plant.

Despite receiving financial assistance, the tariffs for WtE projects remain high owing to significant capital costs, O&M expenses and low calorific value of waste. The tariffs for WtE projects continue to be around Rs 7 per kWh, while renewable energy tariffs for solar and wind energy are below Rs 3 per kWh with the lowest solar tariff dropping to Rs 2.36 in a recent auction conducted by the Solar Energy Corporation of India.

After the Tariff Policy was amended in 2018 by the Ministry of Power, tariff is no longer a bidding parameter for awarding WtE projects. As per the policy, competitive procurement of renewable power is permitted and encouraged for all segments except WtE. Meanwhile, some states are encouraging open access-based power offtake. WtE business models have evolved to include various combinations of tipping fee, viability gap funding (VGF) and per unit tariffs. In order to mobilise funding and undertake technology selection, civic agencies are planning to take up engineering, procurement and construction, and O&M-based business models.

Although many attempts have been made in this area, the country has not seen any successful case so far. Public-private partnership is another emerging model in the waste management space which may benefit WtE projects. Many helpful financing trends have emerged in the segment. For instance, a number of municipal corporations have issued green bonds at attractive interest rates of 8-10 per cent in the past two years to raise funds from the market and utilise them to either provide for the VGF component or support WtE projects in other ways.

In recent years, technologies have been developed that not only help in generating a substantial quantity of energy, but also help in controlling air pollution and reducing waste. However, these are limited and expensive. In order to ensure that different wastes are processed appropriately, thorough impact assessments and stringent regulations must be put in place for plants.

With an increasing number of WtE plants and gasifiers being set up, it is important to have proper waste management and segregation practices in place so that the process of deriving energy is optimised. While WtE projects present a significant opportunity, their net benefit can be realised only with proper implementation.