With capacity aggregating nearly 25 GW, gas-based power plants account for a share of 6.6 per cent in the country’s total installed capacity (374 GW). However, the installed gas-based power capacity has hardly grown over the years, with only about 1.9 GW being added over the past five years. This is mainly on account of a lack of domestic gas supply. As per a report of the Parliamentary Standing Committee on Energy last year, over 14 GW of gas-based capacity is stranded and a large number of projects have turned into non-performing assets. These gas-based power plants were planned based on the assumption that there would be a significant increase in domestic gas production, particularly from the KG-D6 field. But the projections turned out to be grossly inaccurate as production from the KG-D6 block reduced to zero, and there has been no supply for the power sector since March 2013. As a result, the existing gas-based capacity is working at suboptimal plant load factors (PLFs) of 20-25 per cent for the past few years.

However, the recent decline in regasified liquefied natural gas (R-LNG) prices owing to the Covid-19 crisis appears to be a silver lining for the beleaguered gas-based power segment. Gencos have taken advantage of the prevailing low gas prices in the global market to run their plants at slightly better utilisation factors. Consequently, electricity generation from gas-based plants increased by 13 per cent to 33,543 MUs during the period April-October 2020 vis-à-vis 29,722 MUs in the corresponding period last year. The PLF improved from 22 per cent to 26 per cent during the same period. The total electricity generation by gas-based power plants stood at 48,443 MUs (PLF 22.15 per cent) in 2019-20, accounting for a share of 3.8 per cent in the total generation and marginally lower than the 49,834 MUs (PLF 22.88 per cent) recorded in the previous year.

During 2019-20, gas consumption by power plants stood at 353 mmscmd, of which 65 per cent was met by domestic supplies (administered price mechanism/Panna-Mukta-Tapti gas) and the rest by imported LNG (spot and long term). During April-October 2020, the share of imported gas went up. Of the total gas consumption of over 233 mmscmd, 40 per cent was met by imported gas and the rest by domestic gas.

The increase in imported gas supply can be mainly attributed to the softening of spot LNG prices owing to additional supply from Australia and the US as well as a demand decline due to Covid-19. The average price of WIM (West India Marker) LNG stood at $3.17 per mmBtu during January-October 2020 as compared to $5.62 per mmBtu in 2019, as per S&P Global Platts. Data from the Central Electricity Authority (CEA) shows that spot LNG consumption by power plants increased by 87 per cent from 40 mmscmd in April-October 2019 to over 75 mmscmd in April-October 2020 (see fig.). Meanwhile, LNG under long-term contracts declined by half, from 35 mmscmd to 17 mmscmd, during the same period. Domestic gas consumption remained nearly the same at about 140 mmscmd during the period under consideration. 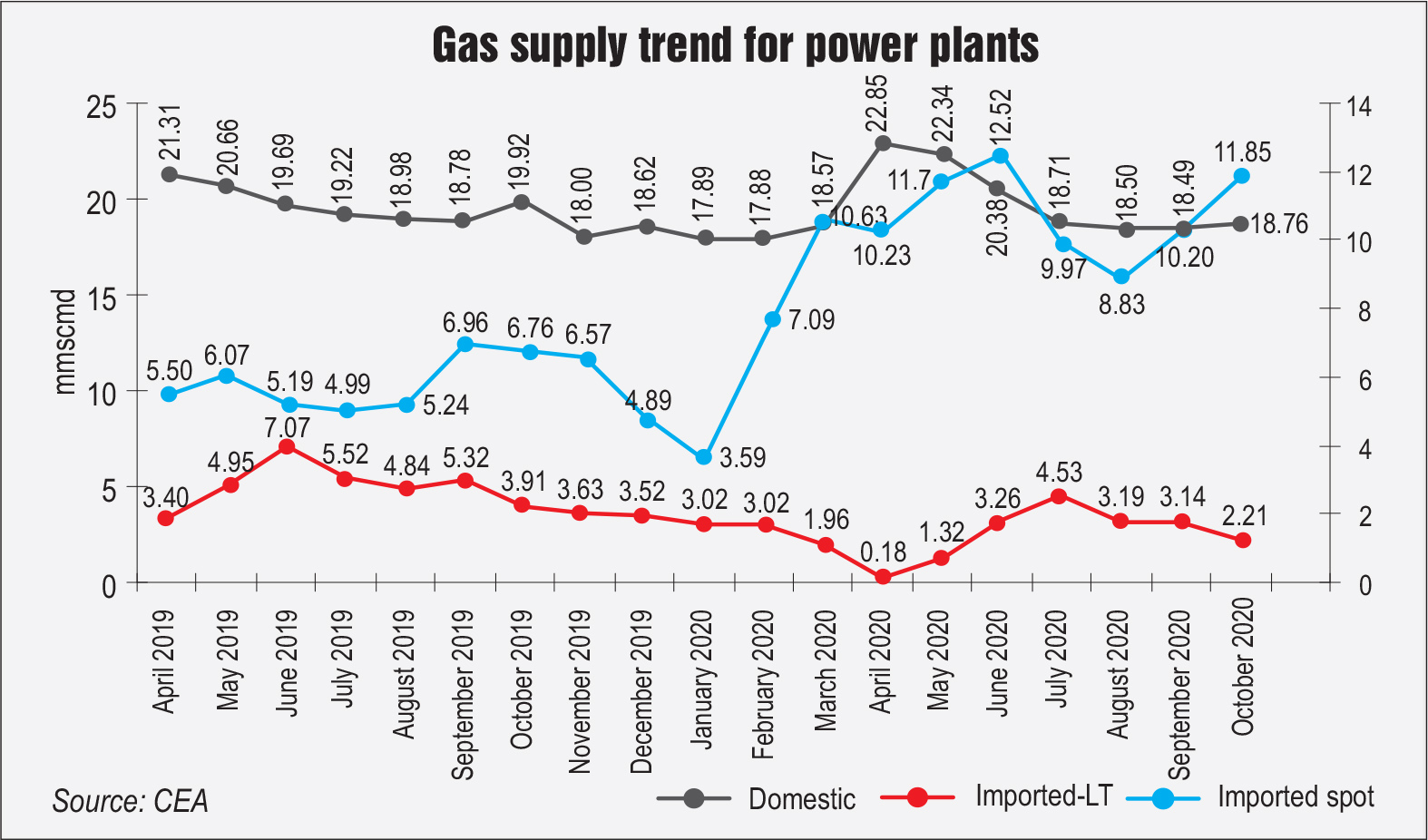 In June 2020, the Indian Energy Exchange (IEX) launched the Indian Gas Exchange (IGX), the first nationwide online delivery-based gas trading platform. The IGX also secured the necessary authorisation to operate as a gas exchange in December 2020, as per the provisions of the Petroleum and Natural Gas Regulatory Board (PNGRB) Gas Exchange Regulations, 2020 for a period of 25 years. The IGX currently offers trade in five contracts – daily, weekly, weekday, fortnightly and monthly – at three physical hubs at Hazira and Dahej in Gujarat and the KG basin in Andhra Pradesh. The exchange has since received an encouraging response from all stakeholders and will shortly commence trading with over 500 registered clients and 14 members. Since its launch on June 15, 2020, the platform has cumulatively traded 74,600 mmBtu. Also, in November 2020, the Ministry of Power amended the guidelines for round-the-clock (RTC) supply from grid-connected renewable energy projects, allowing them to bundle power with any non-renewable source of energy rather than just coal-based power. With the changes in the guidelines, a bidder for an RTC tender can quote a tariff by bundling power from renewable and any other non-renewable resource such as gas and hydro, including power from energy storage systems.

Recently, the PNGRB has notified a new tariff structure for 14 natural gas pipelines to reduce the cost of natural gas for users, including power plants farther away from natural gas sources and LNG terminals on the west coast of the country. Notably, around 21 GW of gas-based power plants are connected to gas pipelines and 4 GW of capacity is fed through local gas fields. As per the PNGRB’s new unified tariff structure, buyers will be charged a fixed tariff for gas transport within 300 km of a source and a fixed tariff for transport beyond 300 km on a single pipeline network. This would allow a reduction in gas transportation costs for buyers farther away from the gas source as they were earlier charged on the basis of the number of pipelines used and the distance from the gas source. Therefore, a buyer using multiple pipelines in GAIL’s networks is likely to benefit significantly from this change. 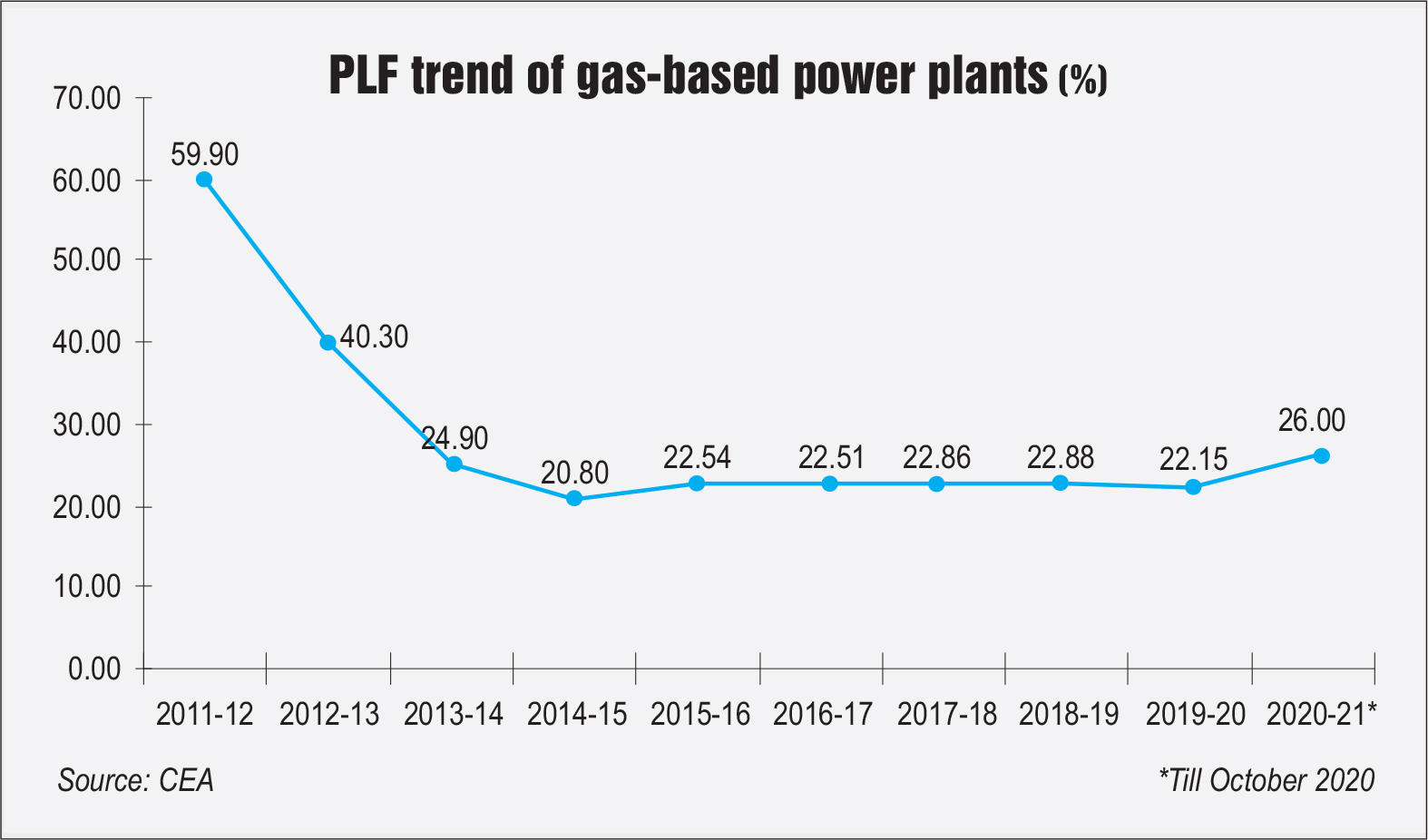 While gencos are currently benefiting from the low R-LNG price trend, R-LNG-based power is not competitive on a sustained basis. The reliance on spot LNG is at best a short-term trend as prices are expected to recover by the first quarter of 2021. The average price of WIM derivatives for the first quarter of 2021 has been discovered at $6.464 per mmBtu (December 7, 2020) on the Intercontinental Exchange. Due to the higher cost of generation, R-LNG power is at the bottom of the merit order. As per the Indian Electricity Grid Code Regulations notified by the Central Electricity Regulatory Commission (CERC), the declared capability on R-LNG is notified separately. Further, the scheduling of R-LNG-based power is highly uncertain with gencos getting scheduled only during peak demand periods. Also, committed R-LNG contracts are often linked with “take or pay” clauses, which is onerous for generators.

An increase in domestic gas production, therefore, is crucial for long-term improvement of the gas-based power sector. Currently, only 20 per cent of the allocated domestic gas is supplied to power plants. Also, as per the central government’s order on priority supply of domestic gas, city gas distribution has the first priority, followed by the fertiliser and power sectors.

In addition, the central government has given marketing and pricing freedom for domestic gas sale from new fields and gas-based power plants are not able to compete for buying new domestic gas due to the high ceiling price of gas and unviable terms and conditions of supply.

Apart from supply challenges, there are a host of taxation-related issues hampering the operation of gas-based power plants. Other issues include a lack of flexibility in gas transportation/supply agreements for variable gas flow rate and the growing need for aligning the regulations of the CERC and PNGRB.

Several reforms are required to salvage the country’s gas-based power segment. In its report published in January 2019, the Standing Committee on Energy had recommended to the government that the stressed gas-based plants be revived by measures such as assured gas allocation from the Oil and Natural Gas Corporation’s deep water fields, diversion of domestic gas from non-core sectors to the power sector, launch of another round of the e-bid R-LNG scheme with desired exemptions and financial support, pooling of R-LNG with domestic gas through an aggregator such as GAIL for reasonable pricing, and bringing gas under the ambit of GST similar to coal.

Going forward, the large-scale introduction of renewables, in view of the 175 GW target, has increased the need to balance the electricity grid. Gas-based plants, with their rapid ramp-up rates and quick start-up time, can play a vital role in grid balancing and, therefore, it is imperative to resolve the issues facing the gas-based power segment. With the government aiming to increase natural gas consumption in the energy mix from 6.2 per cent at present to 15 per cent by 2030, and a projected rise in domestic gas production in 2021 (domestic production is expected to grow by 4 bcm year on year after falling by 3 bcm in 2020), there is a glimmer of hope for the gas-based power segment.