While the Indian power sector is struggling to provide extensive, uninterrupted and reliable grid supply, diesel gensets have assumed greater significance as the preferred power backup option in sectors such as agriculture, construction, infrastructure and residential.

Diesel generators are the most commonly used gensets and use diesel as the main fuel. Also, they are easier to install and operate, have low space requirements and are easily available  in the market; all this makes the diesel generator a preferred choice even though diesel is more expensive on a kWh basis. Further, DG sets are economical due to easy on-site fuel availability.

Input prices have also been on the rise. Pig iron rates are currently at Rs 25,000 to Rs 26,000 per tonne in the domestic market, up by a marginal Rs 300 in the past few months. As a result, manufacturers are expected to hike prices to sustain their margins. While some manufacturers have increased the prices of their products, a number of them have kept their prices constant and have even reduced them in order to capture a higher market share. 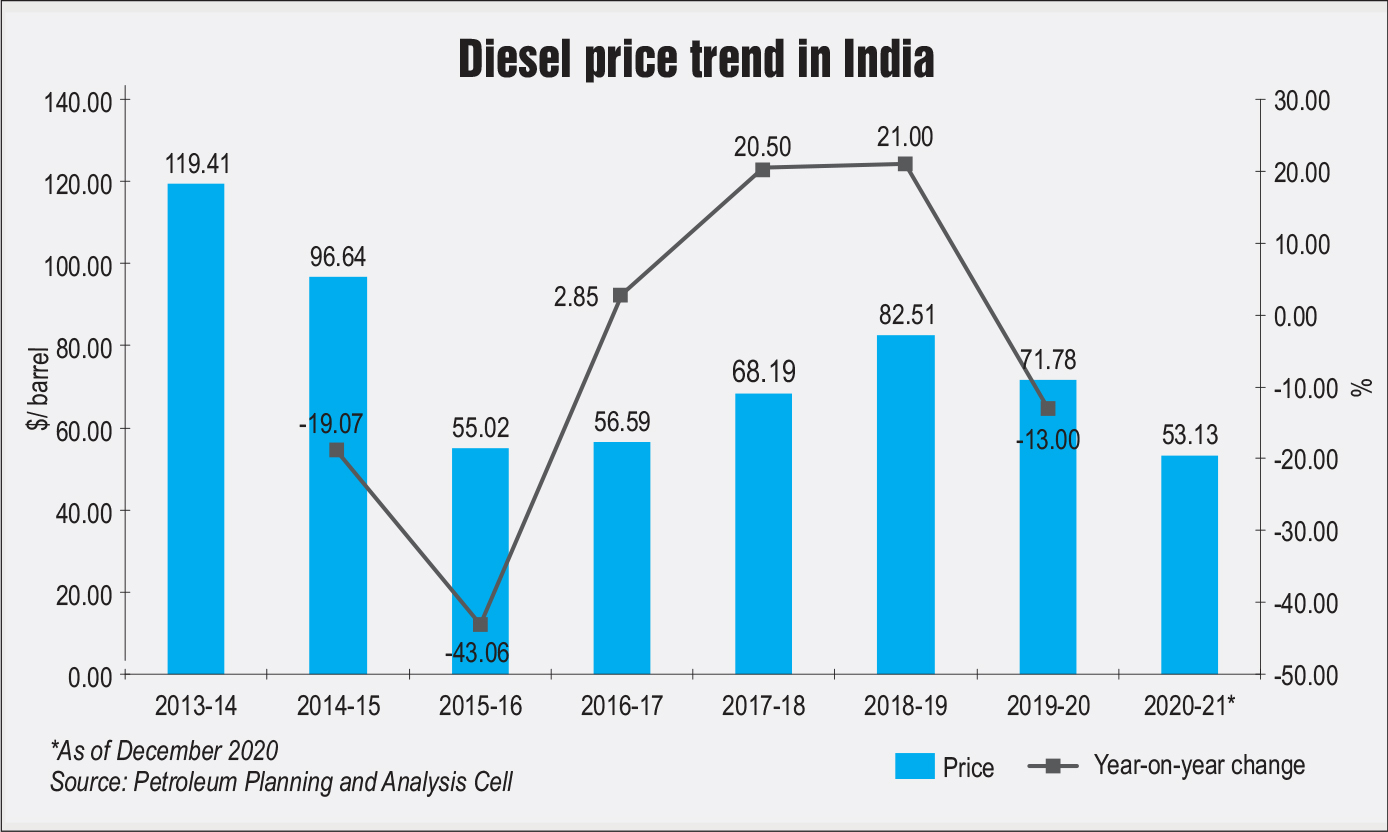 Fuel prices account for a major component of the primary costs of a DG set. As per the Environment (Protection) Rules, 2013, the specifications for commercial fuel in DG sets are the same as those for commercial high speed diesel (HSD) used in diesel vehicles. HSD has higher thermal efficiency and lower cost as compared to other fuels.

A number of industries are now shifting to cleaner sources of power generation and with tighter emission regulations in place, gas gensets are gaining traction. As per the last price revision by Indraprastha Gas Limited (IGL) in October 2020, the cost of CNG was Rs 42.70 per kg in Delhi and that of PNG was Rs 27.50 per unit. 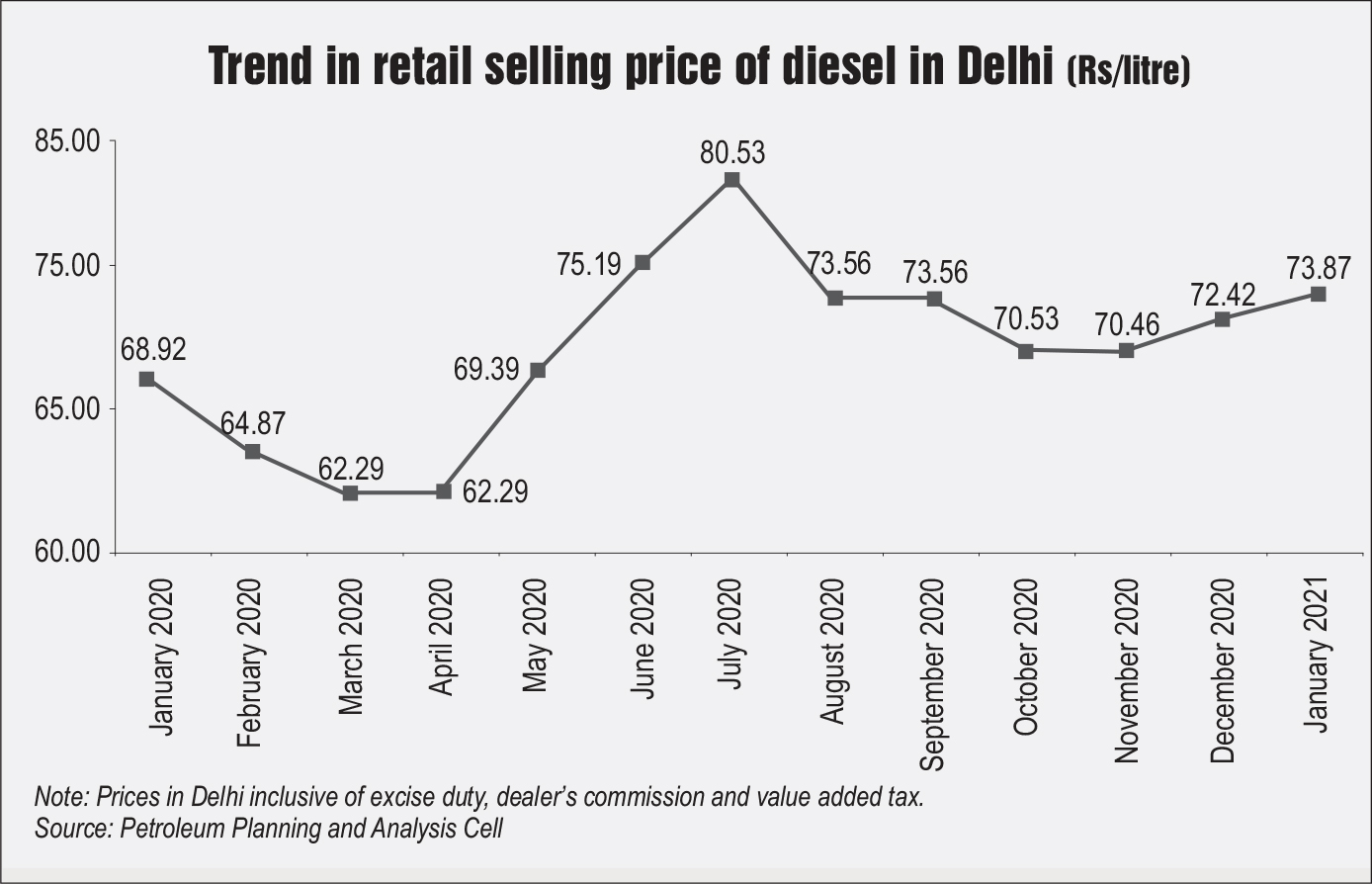 The cost of power generation through DG sets can be as high as over Rs 15 per unit. In some cases, it is even in the range of Rs 25-Rs 40 per unit. The high generation costs can be attributed to pilferage and high costs of fuel transportation, whereas, the cost of electricity generation from gas-based gensets is generally lower at Rs 11-Rs 12 per unit. As a result, DG sets are losing ground to more competitive options.

DG sets are preferred less by commercial and industrial (C&I) consumers, that use renewable energy sources such as solar rooftop. For rooftop solar projects, the opex is Rs 3.50-Rs 4 per kWh; this is lower than the average C&I grid tariff prevalent across most states. Further, operations and maintenance (O&M) costs of DG sets are generally higher. However, the O&M requirement and the cost depend on the quality of fuel used and the hours of operation of the DG set.

The diesel genset industry currently faces significant cost pressures. The increasing focus of authorities on pollution control is expected to drive up the capital costs of these generators. Further, with falling solar and wind power tariffs and rising diesel prices, these gensets have become less cost competitive while wind and solar rooftop systems have emerged as financially viable options for providing power backup. That said, technology advancements such as hybridised solutions can help DG set owners to economise on costs by reducing fuel consumption.

While the DG set segment faces bottlenecks, these generators will continue to be in demand due to their increased usage by the residential sector as well as for being an effective source of back-up power.