Bhutan has a feasible hydro potential of 23,760 MW from 76 hydro schemes for projects greater than 10 MW. In comparison, the demand for electricity is meagre (and is presumably going to be so in the near future). So, the hydroelectric potential of Bhutan can be realised for mutually beneficial results for both Bhutan and India.

As of June 2020, the installed capacity of hydropower in Bhutan stood at 2,326 MW, which is less than 10 per cent of the total potential. Of this, 2,136 MW has been developed with technical assistance and financial support from India. As regards future outlook, 2,820 MW of capacity is under construction and 7,285 MW of capacity is at various stages of development with Indian assistance on the technical and financial fronts.

Of the projects under construction, the Punatsangchhu Stage I project’s commissioning is being delayed due to subsidence of the right bank hill mass in the dam area. For the Punatsangchhu Stage II project, poor geological strata and shear zone are being encountered at the left bank and foundation of the dam. For the joint venture (JV) project at Kholongchu, pre-construction work is in progress. The agreement between the Royal Government of Bhutan (RGoB) and the Government of India (GoI) for implementation of the project was signed in 2014. The concessionaire agreement between Kholongchhu Hydro Energy Limited (KHEL) and RGoB was also signed on June 29, 2020. The under-construction projects are expected to be commissioned by 2025.

For projects to be implemented jointly by both governments through JVs or through government-owned agencies, an empowered joint group (EJG) was set up in March 2009. The purpose of the EJG included fast-tracking approval of implementation modalities, financing mechanisms, fund flows and contingency plans; and monitoring the progress of the preparation of detailed project reports (DPRs) and the construction of selected hydropower projects. The GoI had agreed to a minimum import of 5,000 MW of electricity from Bhutan by the year 2020. In a protocol signed in 2009, this limit has been increased to 10,000 MW.

The projects that have been implemented with Indian assistance in Nepal include Pokhra (1 MW), Trisuli (21 MW), Western Gandak (15 MW) and Devighat (14.1 MW). As per the provisions of the Mahakali Treaty, 70 MUs of energy is supplied to Nepal from the Tanakpur hydroelectric (HEP) free of cost.

Some more projects of mutual interest are under discussion. The Pancheshwar multipurpose project is on the river Mahakali (Sarda). The project is under the integrated Mahakali Treaty signed between Nepal and India in 1996. The project envisages the construction of a 311 metre high rockfill dam at Pancheshwar with two underground powerhouses. The total installed capacity is 4,800 MW. Additionally, a 95 metre high concrete gravity dam has been envisaged at Rupaligad, with two underground power stations of 240 MW capacity. The annual generation of the project is projected to be 10,055.6 MUs on an average. The estimated cost of these projects is Rs 389,002 million and Rs 32,842 million respectively.

Another key project is the Sapta Kosi high dam multipurpose project that envisages a high dam on the river Sapta Kosi at Barakshetra in Nepal. The projected power generation is 15,730 MUs, of which a large amount will be available to India. This project could provide irrigation and flood control benefits in Bihar. The Sun Kosi storage-cum-diversion scheme, with 3,300 MW of installed capacity, forms an integral part of the project. The Kamala and Bagmati multipurpose projects are also under consideration. Their feasibility study and preliminary study are expected to be completed along with the preparation of the DPR for the Sapta Kosi project.

Another key project is the Arun 3 project, which was awarded by the Nepal government to Satluj Jal Vidyut Nigam Limited (SJVN Limited) on a build-own-operate-transfer (BOOT) basis. The two parts of the project are a 900 MW generation project on the river Arun in Sankhuwasabha district and the associated 400 kV D/C transmission system of 217 km length from the powerhouse to the Nepal-India border. The commissioning date is expected to be in September 2022.

Another upcoming cross-border hydro project in Nepal is the Upper Karnali project, which was awarded to GMR Upper Karnali Private Limited (a special purpose vehicle promoted by the GMR Group of India) on a BOOT basis. It is a run-of-the river project with an installed capacity of 900 MW. It will supply power to Nepal, India and Bangladesh for a contracted period of 25 years from the date of commercial operation. The distribution of power from the project is envisioned as follows: 12 per cent free power to the Nepal government, 56 per cent of the power will to be sold to Bangladesh under a long-term power purchase agreement (PPA) under a bilateral mechanism; and 32 per cent to be sold to India under short/mid/long-term bilateral PPAs.

The hydro potential of Myanmar is about 100,000 MW. However, only about 39,720 MW has been identified for development. The country’s hydropower capacity is about 3 GW.

Some hydropower projects have been proposed to be developed in Myanmar with Indian assistance. The Tamanthi project has a capacity of 1,200 MW, with a total cost of around Rs 172,706.9 million. The Shwezaye HEP has a capacity of 880 MW and its total cost is around Rs 180,259.3 million. The project could not be finalised due to geological constraints. Implementation of both projects has been suspended by the Ministry of

Electric Power of Myanmar because of social and environmental impacts as well as economic unviability. For another project, the Thaukyegat (1) hydropower project of 90 MW capacity, a preliminary assessment study has been prepared with assistance from India. This project is expected to generate 468 MUs annually. 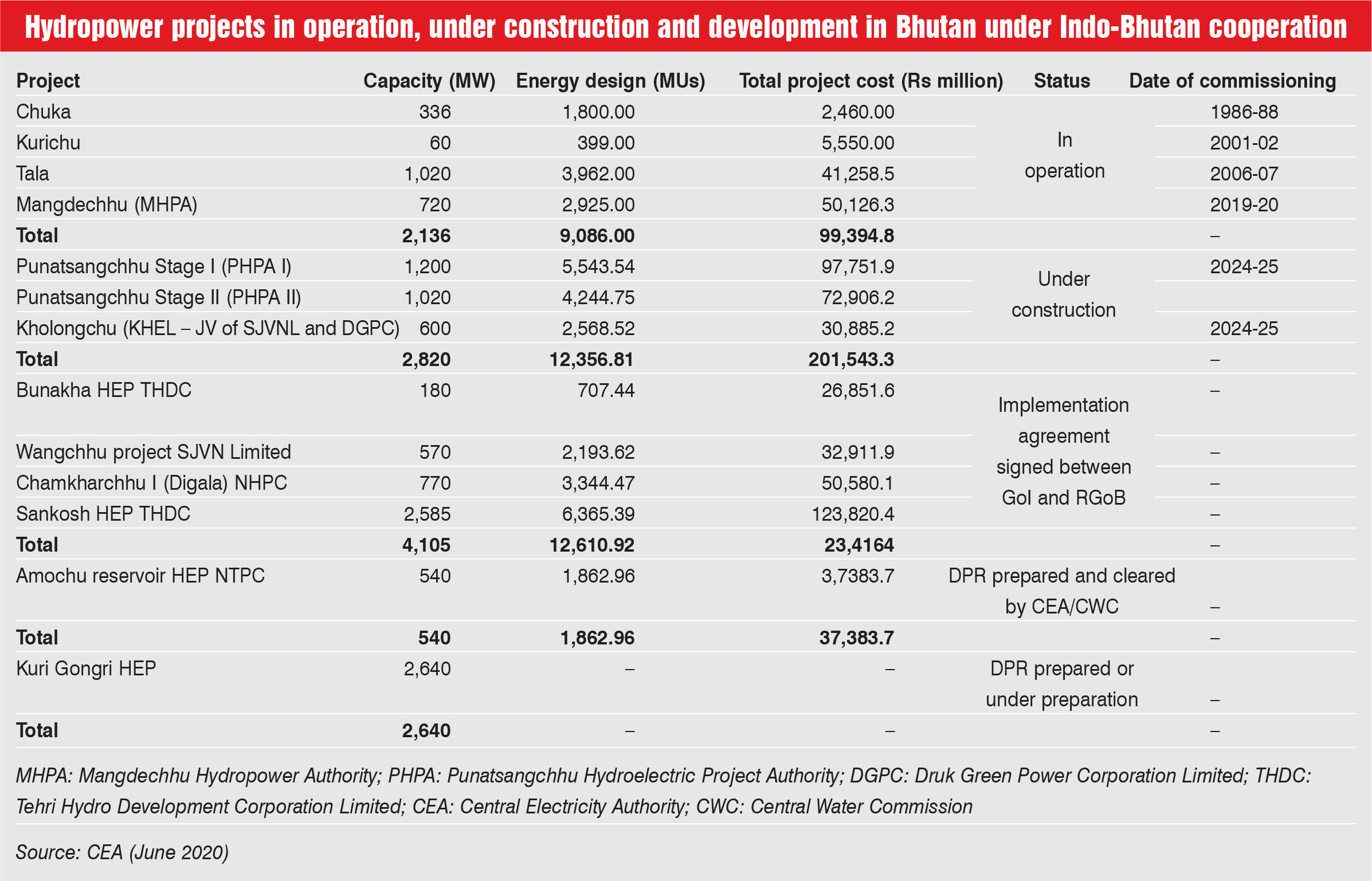 To tackle transmission constraints, GoI is focusing on developing cross-border transmission links to help augment cross-border trade of electricity. A second 400 kV D/C link is under construction between Baharampura (India) and Bheramara (Bangladesh) to increase the power transfer capacity between the two regions. As of September 2020, work on the link was completed and the Indian portion was charged in May 2020 by

Power Grid Corporation of India Limited. For power evacuation from various upcoming HEPs in Bhutan, the Jigmeling (Bhutan)-Alipurduar (India) 400kV D/C (quad) transmission line is under implementation. Construction of 400 kV bays at the Dhalkebar substation for 400 kV operation of the Muzaffarpur (India)-Dhalkebar (Nepal) line is in progress. This work is being done by the Nepal Electricity Authority.

Net, net, developing hydropower potential in Bhutan, Nepal and Myanmar and creating strategic partnerships with these countries could help India become economically stronger, and at the same time, help meet the energy demands from across the borders.