Renewable energy has grown at a considerable pace over the past few years with renewable capacity addition, especially solar, exceeding thermal. India’s installed renewable power capacity (excluding large hydro) has quadrupled over the decade to reach over 90 GW as of end-November 2020. In terms of cost, solar and wind power have already proven to be more viable than coal-based power. The key reasons for the sharp jump in renewable capacity and a steep decline in tariffs are private sector-led development, falling technology costs, auction-led project allocation, and proactive government policies. The government has set a target of establishing 175 GW of renewable capacity by 2022, which includes 100 GW of solar and 60 GW of wind capacity. The evacuation of such a huge amount of renewable energy is a key challenge for power system planners.

Of the 66.5 GW planned renewable energy capacity, about 4 GW will be connected to the intra-state transmission network and the balance 62 GW to the interstate transmission network. The total length of transmission lines to be developed under the scheme is 13,370 ckt. km, mainly at the 765 kV level, and the transformation capacity to be added stands at 120,500 MVA. Moreover, 26 new substations will be established under the scheme and several others will be augmented. 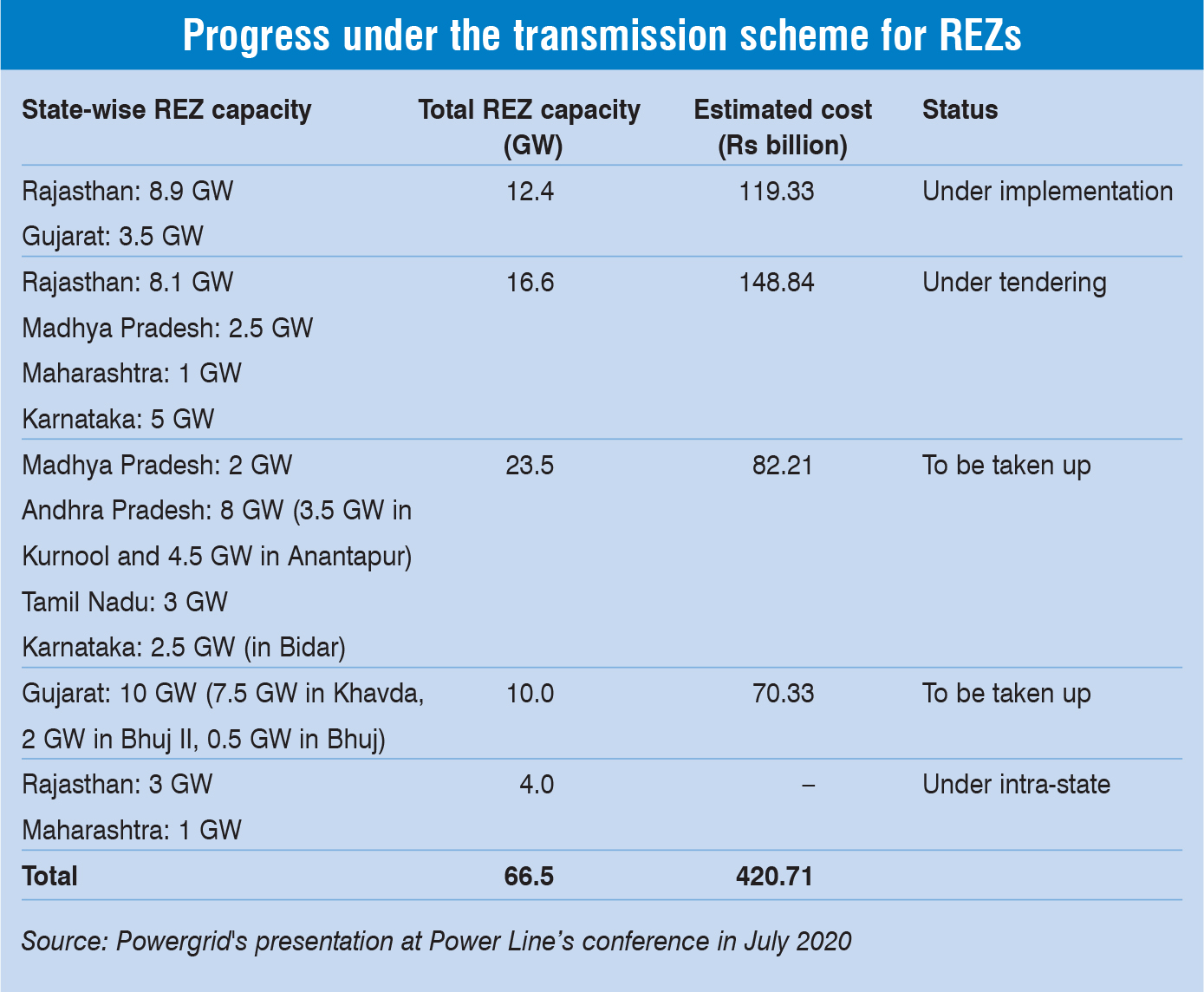 The Green Energy Corridors (GEC) scheme is a comprehensive initiative for the evacuation and integration of 32,713 MW of renewable energy capacity during the Twelfth Plan period (2012-17). The scheme involves the development of a transmission system and control infrastructure in renewable-rich states/UTs such as Andhra Pradesh, Gujarat, Himachal Pradesh, Jammu & Kashmir, Karnataka, Maharashtra, Rajasthan, Madhya Pradesh and Tamil Nadu. To evacuate the proposed capacity, the development of an intra-state and interstate transmission system, renewable energy management centres (REMCs) and control infrastructure such as reactive compensation and storage systems is being undertaken.

Under GEC I, about 12,600 ckt. km of line length and 37,000 MVA of substation capacity are being added at the inter- and intra-state levels. The elements at the interstate level have already been completed by Powergrid, whereas the deadline for intra-state elements, to be implemented by the state transmission utilities, was extended till December 2020 from March 2020.

In February 2020, Powergrid commissioned 11 REMCs under GEC I, allowing centralised forecasting and monitoring of renewable energy generation, which is crucial for its integration into the grid. The REMCs are equipped with artificial intelligence-based renewable energy forecasting and scheduling tools, which provide better visualisation and situational awareness to grid operators. They coordinate with the respective state load despatch centres (SLDCs) and are integrated with SCADA for the despatch of renewable generation. These REMCs are co-located with the national load despatch centre, the SLDCs in Tamil Nadu, Karnataka, Andhra Pradesh, Maharashtra, Madhya Pradesh, Gujarat and Rajasthan, and the regional load despatch centres in Bengaluru, Mumbai and Delhi. 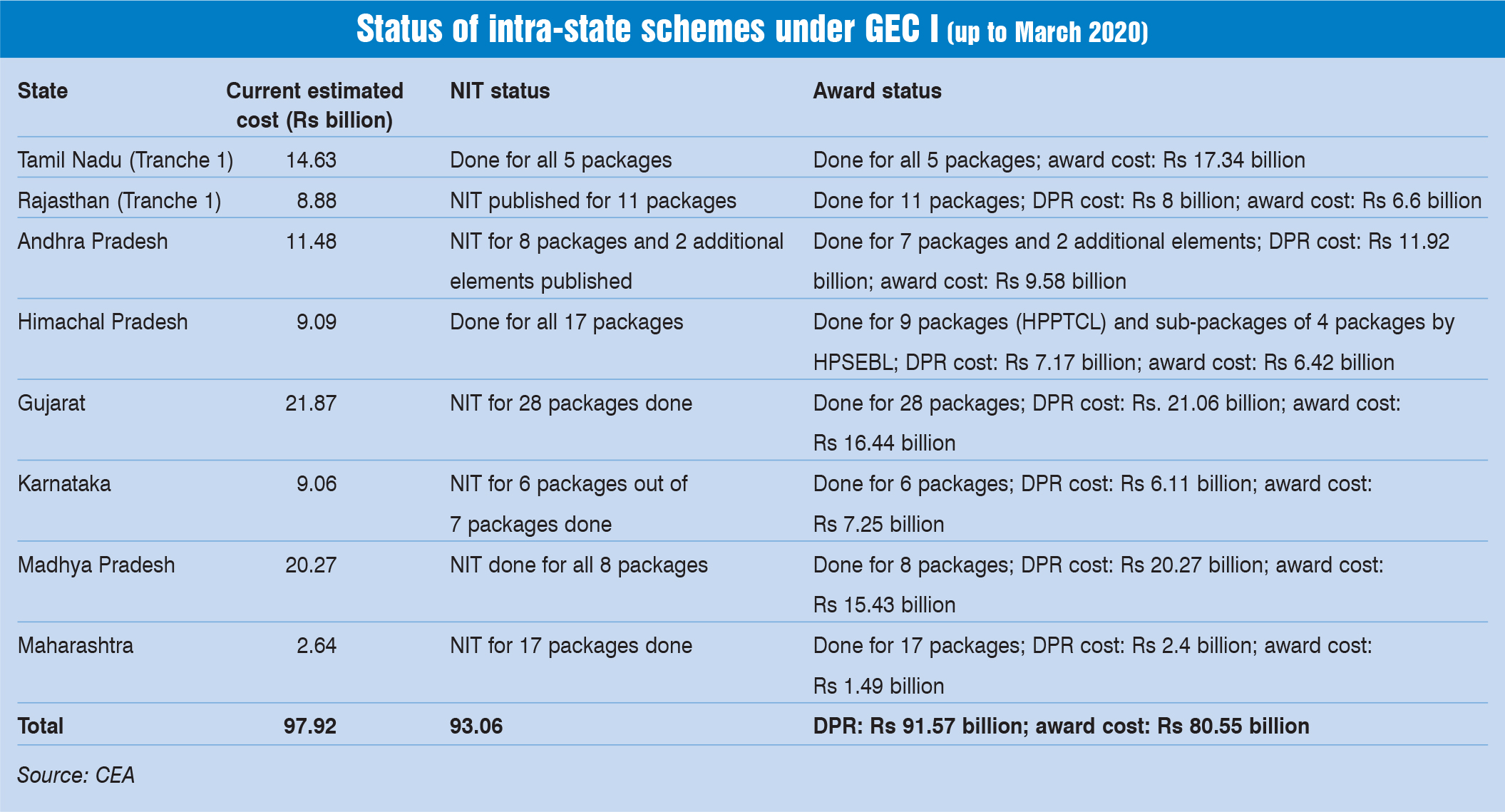 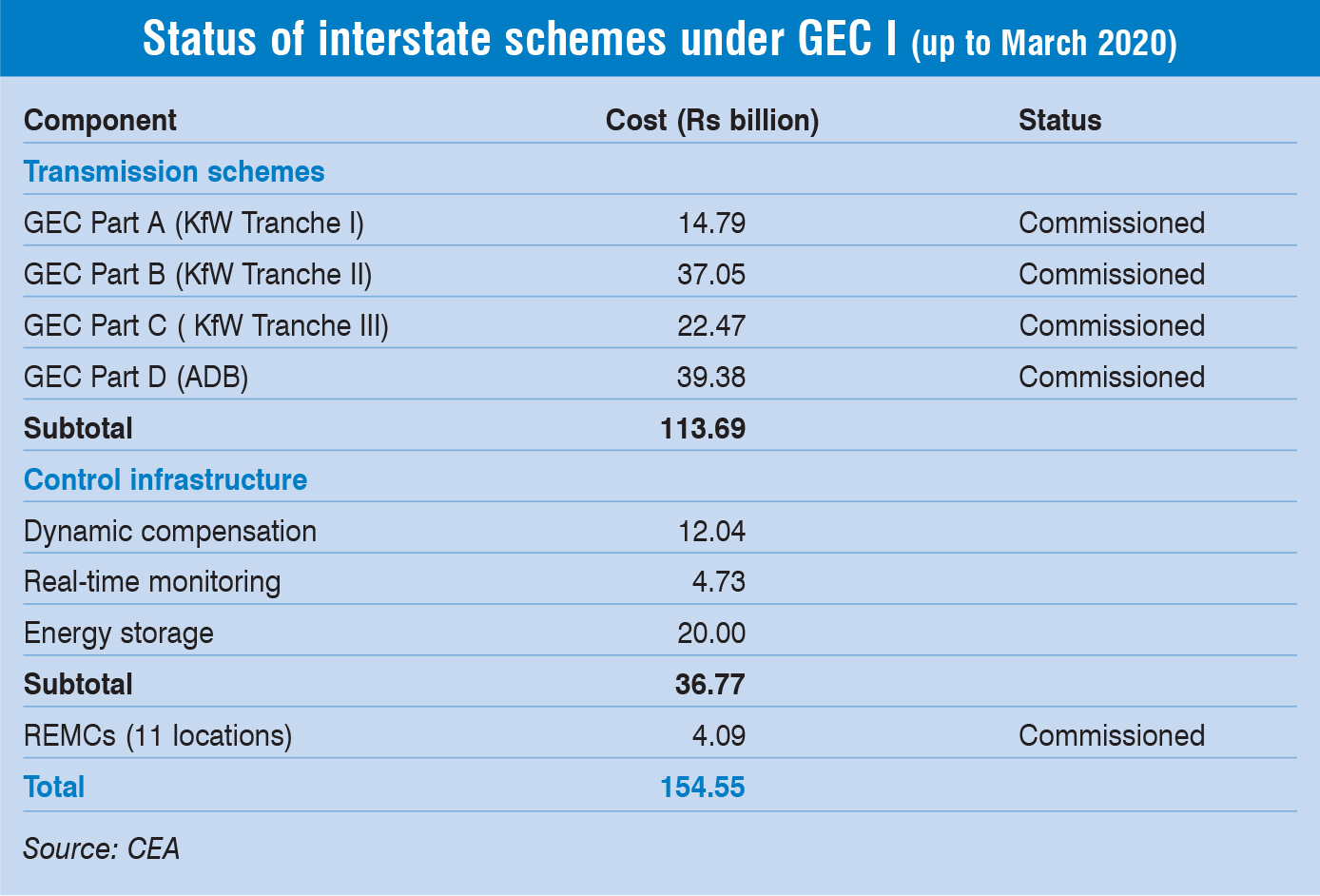 Issues in grid integration of renewables

There are several challenges in integrating variable renewable energy into the grid. The biggest challenge is that it takes nearly two to three years to develop the transmission infrastructure, whereas renewable energy projects take a few months. In this situation, projects do not have access to grid connectivity, leading to losses for developers and backing down of renewable energy-based power plants. The variability in renewable energy generation patterns and the daily uncertainty associated with it due to weather issues make grid integration a significant challenge. The grid integration of renewable energy requires huge amounts of data on variables such as weather and historical generation, as well as real-time SCADA data. As this data is present in silos, systems for data sharing are required to provide homogeneous access to the grid.

When renewable energy capacity is added, it is not known where exactly it will be used. It is important for the transmission planner to know the drawal location to be able to plan the network efficiently. A lot of renewable energy capacity is located in the remote wasteland areas of states such as Gujarat and Rajasthan. There are issues related to grid strength such as the high fault level of systems at these locations. Concentrating one renewable energy source in pockets (for example, only solar in Rajasthan, only wind in Gujarat, etc.) poses challenges in transmission planning and grid operation. The hybridisation or dispersion of resources is the key to the successful integration of renewable energy.

Energy storage systems (ESSs) can play a crucial role in the current scenario. ESS can be used to cater to the peak demand, address the variability and intermittency in generation, and provide grid support for balancing. Batteries are the most popular ESS in recent years although there are other forms of storage systems such as flywheels, compressed air energy storage, hydrogen fuel cells and pumped storage plants. Powergrid has successfully implemented the first-of-its-kind pilot project for a grid-scale battery energy storage system (BESS) in India, comprising batteries, a power conditioning system, a battery management system, etc., at Puducherry. It is based on two different technologies, advanced lead acid and lithium-ion. Based on the experience gained from the project, large-scale BESS may be adopted in the future. Further, the transmission sector must make room for smart grid technologies. Renewable energy projects do not serve any purpose without the requisite transmission infrastructure. Hence, India must shift its priority to strengthening its transmission infrastructure in order to ensure a smooth green energy transition.