In the past few years, capacity additions in the hydropower segment have been low. This is owing to a number of issues and challenges facing the segment, such as the long gestation period of projects, delays in obtaining clearances, and lack of adequate funding. In the emerging power sector, characterised by large-scale penetration of intermittent solar and wind energy sources, hydropower is likely to play a key role in maintaining grid stability. Hydroelectric plants (HEPs) have quick ramping capabilities, which make them suitable for flexible operations. Therefore, in order to promote the development of hydropower, a number of policy initiatives have been taken, such as the inclusion of large hydro in renewables, tariff rationalisation, and budgetary support for the flood moderation and infrastructure components of HEPs.

Currently, the installed hydropower capacity (projects over 25 MW) in the country stands at 45,849 MW. Sector-wise, the state sector accounts for the highest share in the installed hydro capacity at 59 per cent, followed by the central and private sectors with 34 per cent and 7 per cent respectively. Some of the key HEPs commissioned in the last couple of years are North Eastern Electric Power Corporation Limited’s 450 MW Kameng HEP Units 1-3 and 110 MW Pare Units 1 and 2 in Arunachal Pradesh, and Telangana State Power Generation Corporation Limited’s 30 MW Pulichintala Unit 4.

The hydropower segment has witnessed modest capacity addition in the past few years. The installed hydro capacity has grown at a compound annual growth rate (CAGR) of about 2 per cent in the past five years (2014-15 to 2019-20), while coal-based power capacity and renewables have grown at a CAGR of 7 per cent and 20 per cent respectively in the same period. As mentioned earlier, the slowdown in the growth of hydropower capacity could be attributed to a number of factors such as the long gestation period of HEPs, geological surprises, local resistance, delays in obtaining environmental clearances, limited offtakers, and a lack of policy focus.

During 2020-21 (up to November 2020), hydropower generation stood at 118.48 BUs, showing a slight decline of around 2 per cent over the corresponding period of the previous year, while overachieving the target set for the period by 8 per cent. During 2019-20, however, hydropower generation stood at 156 BUs, the highest in the past decade, owing mainly to ample rainfall and steady electricity production from HEPs. The generation in 2019-20 was 14-15 per cent higher than that in the previous year, as well as the target set. On the other hand, the share of hydro generation in total generation declined from 12 per cent in 2014-15 to 11 per cent in 2019-20, primarily owing to an increase in the capacities of the wind and solar segments.

In one of the key developments pertaining to the resolution of stressed HEPs, in November 2020, NHPC began the process of merging Lanco Teesta Hydro Power Limited (LTHPL) with itself. Earlier, in October 2019, NHPC had won the bid to take over LTHPL and the implementation of the 500 MW Teesta VI project in Sikkim under the corporate insolvency resolution process. This was the first time that a public sector undertaking had won a project under the Insolvency and Bankruptcy Code, 2016. LTHPL, promoted by the Lanco Group, had halted project development plans owing to a financial crunch. As per the approved resolution plan, NHPC will pay Rs 8.77 billion to LTHPL’s financial creditors while Rs 111.2 million will go to its operational creditors. The project will supply power at a levellised tariff of Rs 4.07 per unit and is likely to be completed in the next four years.

More recently, in January 2020, NHPC signed a definitive agreement for the implementation of the approved resolution plan for takeover of the 120 MW Rangit IV HEP of Jalpower Corporation Limited in Sikkim. The total cost of the project is estimated to be Rs 9.43 billion.

Major construction activities have restarted at one of the key upcoming HEPs, NHPC Limited’s 2,000 MW Subansiri Lower hydro project in Assam, and it is now scheduled for commissioning by March 2022. Work on the project was halted from December 2011 to October 2019 due to protests by locals and other groups concerned about safety and the adverse impact of the project downstream. In another development, NHPC has received approval from the Cabinet Committee on Economic Affairs for pre-investment activities for the 2,880 MW Dibang multipurpose project in Arunachal Pradesh, paving the way for the implementation of the mega project.

New project announcements have also been made at the state level. In January 2021, the union cabinet approved an investment of Rs 52.82 billion for the 850 MW Ratle HEP located on the river Chenab in Jammu & Kashmir. The project will be developed by a joint venture between NHPC and Jammu & Kashmir State Power Development Corporation Limited. To recall, the Ratle project had earlier been awarded to private major GVK, but it got stalled in July 2014 over a host of issues. Another MoU was signed by the two entities in the same month for execution of the Kirthai II (930 MW), Sawalkot (1,856 MW), Uri I (Stage II) (240 MW), and Dulhasti (Stage II) (258 MW) hydropower projects. Meanwhile, in December 2020, central hydropower company SJVN Limited was awarded three hydroelectric power projects totalling 501 MW the Tandi (104 MW), Rashil (130 MW) and Sach Khas (267 MW) projects – by the Himachal Pradesh government. The three projects are to be developed in the Chenab river basin in Himachal Pradesh. 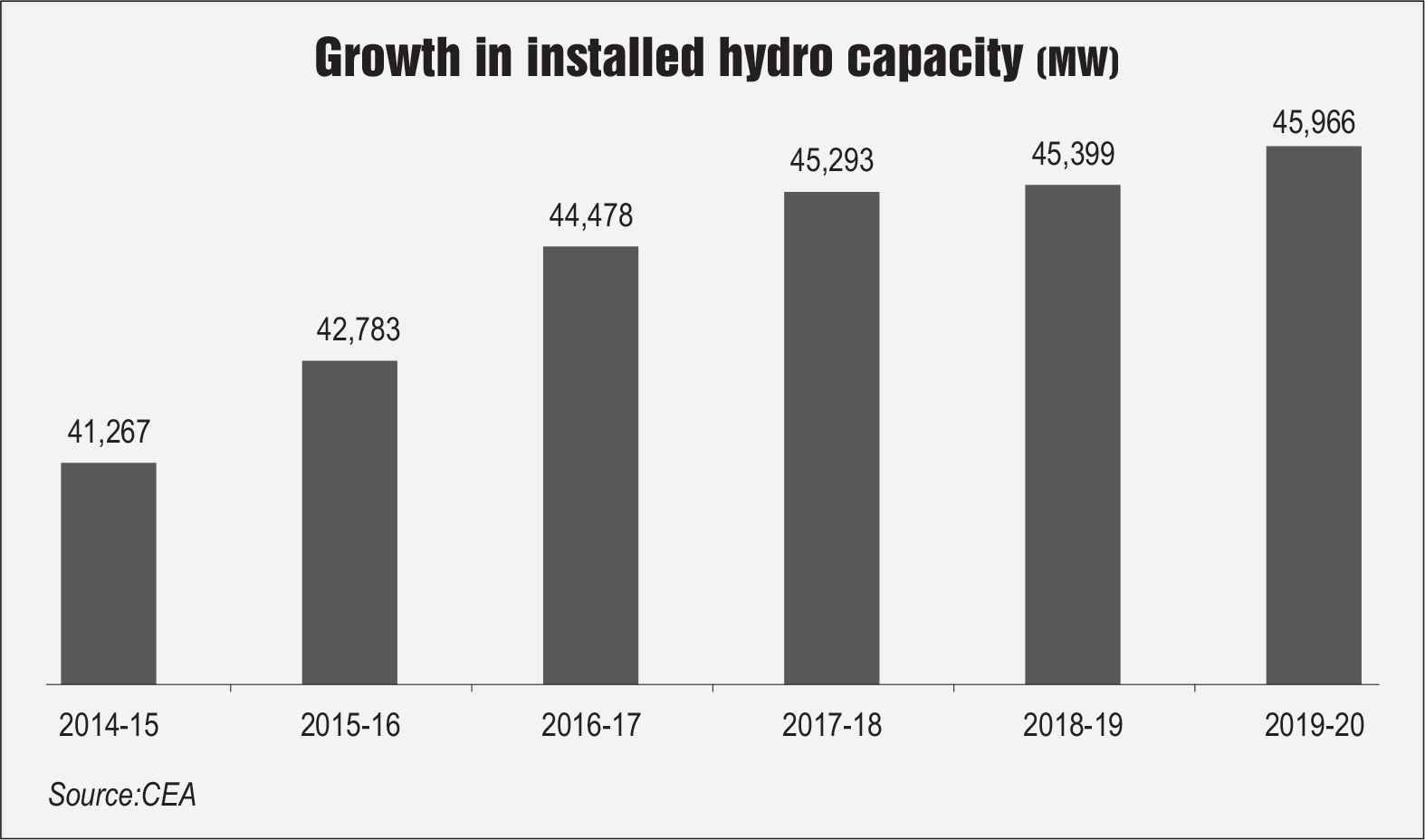 Role of hydropower in grid balancing

Hydropower’s role in grid balancing was demonstrated in the management of the pan-Indian lights-off event by the Power System Operation Corporation, which took place at 9 p.m. on April 5, 2020 during the Covid-19 lockdown. The anticipated reduction in all-India demand during this event was estimated at 12-14 GW; however, the total reduction recorded during the event was much higher, at 31,089 MW. Prior to the event, there were concerns that the sudden fluctuation in demand could result in grid instability and blackouts in many states. However, hydropower plants played a key role by providing the flexibility to quickly ramp generation up or down, as they take the least time to switch on or off. 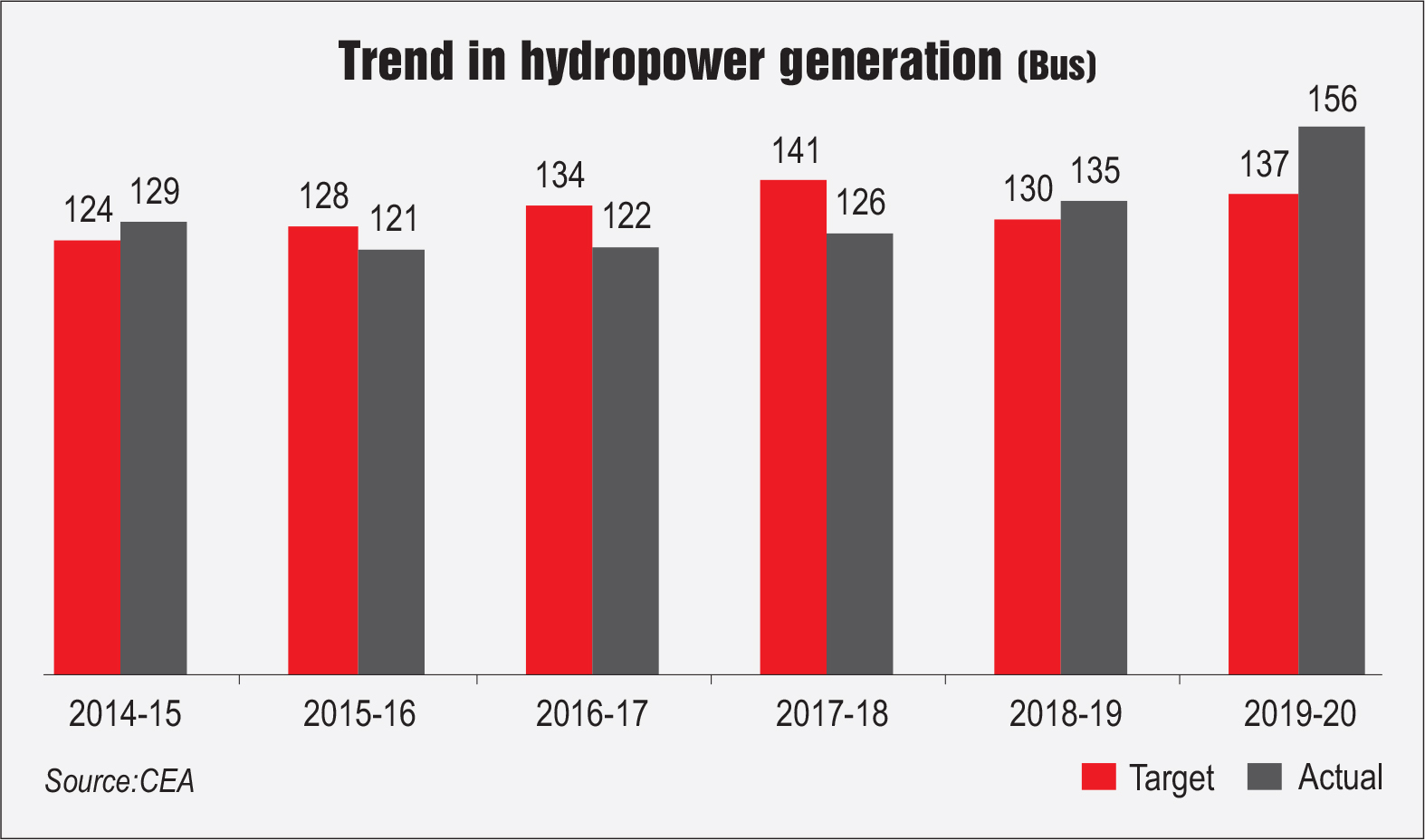 Pumped storage plants (PSPs) can provide an ideal solution for energy storage and load balancing. It is the only commercially proven technology available for grid-scale energy storage. Currently, there are nine PSPs with a total capacity of 4,786 MW in the country. However, only six PSPs (Kadamparai, Bhira, Srisailam, Ghatgar, Purulia and Nagarjuna Sagar), aggregating 3,306 MW, are working in both generation and pumping modes. The remaining three PSPs (Panchet Hill, Sardar Sarovar and Kadana Stages I and II), aggregating 1,480 MW, are working only in generation mode, owing to the unavailability of lower reservoirs/tail ponds and vibration issues. While India has a PSP potential of 96.5 GW, only 5 per cent has been harnessed so far. A separate pumped storage policy, and appropriate tariffs/ prices for the services that PSPs offer, among other things, could be helpful in promoting the development of PSPs.

Industry players have been looking at this segment with significant interest. Last year, in August 2020, NTPC Limited announced that its wholly owned subsidiary NVVN had signed an MoU with Greenko Energies Private Limited to explore opportunities to supply round-the-clock renewable energy. Greenko is developing over 40 GWh of pumped hydro storage projects across six states in India. In June 2020, the Andhra Pradesh government approved the establishment of an integrated renewable energy project at Pinnapuram village in Kurnool district by Greenko Energies Private Limited. The Pinnapuram project will feature a 1,200 MW pumped storage powerhouse, as well as a 2,000 MW solar plant and a 400 MW wind farm. Once commissioned, it will be the largest pumped storage scheme in India.

As per the CEA’s Optimal Generation Capacity Mix, the installed hydropower capacity is estimated to reach 73 GW (including 5,000 MW of small hydro and 4,356 MW of hydropower imports) by 2029-30, contributing to nearly 8 per cent of the total power generation. Nearly 13 GW of hydropower projects are also currently at various stages of execution. In order to accelerate the development of HEPs, the segment needs to overcome various challenges, including the unavailability of low-cost finance, stressed assets, geological surprises, contractual disputes, pubic resistance, delays in environmental clearances, and limited off-takers. Further, the benchmark capital costs of HEPs has been rising on the back of burgeoning cost of inputs such as steel, aluminum and cement. It has increased gradually from Rs 60 million per MW in 2004 to Rs 160 million per MW in 2018. Besides this, the segment saw disruptions due to Covid-19 as the schedules of under-construction projects were impacted due to labour and material supply constraints, and generators’ receivables piled up due to discom liquidity issues.

In order to tackle the challenges facing the hydropower segment, a number of policy measures have been undertaken in the last couple of years. Key among them were the inclusion of large hydro in renewables, tariff rationalisation, and budgetary support for the flood moderation and infrastructure components of hydropower projects. Furthermore, with the reclassification of hydro as a renewable energy source, the centre plans to impose obligations to ensure firm offtake of hydropower, and a hydropower obligation provision has been included in the Draft Electricity (Amendment) Bill, 2020. Moreover, in order to tackle the issue of dispute resolution facing the segment, the Ministry of Power has issued guidelines for hydropower developers, mandating a quick resolution of contractual disputes. These guidelines are binding on central public sector undertakings. Besides this, on the ministry’s advice, states are now coming forward to promote investments in the hydro segment by reducing or waiving their free power commitments, bringing down GST, reducing water cess, etc. Apart from this, implementing measures such as integrated basin studies, differential tariff (peak and off-peak), and providing long-term finance to projects could be useful in expediting hydro power developing in the country.

Going forward, policy measures taken by the government are likely to accelerate the development of hydropower in the country in the coming years. This augurs well for the overall health and stability of the power sector, given hydropower’s crucial role in maintaining grid stability with the large-scale integration of intermittent solar and wind energy sources.