Conventional power plants are capable of converting only 35-45 per cent of energy from the resources infused into the power plant, and a substantial proportion of electricity is heat loss, which is attributable to fundamental constraints inherent in a thermodynamic cycle.

Cogeneration, and correspondingly trigeneration, are two technologies that can productively harness and channelise the residual heat emitted for reutilising the heat, for HVAC (heating, ventilation, air-conditioning) purposes by redirecting and supplying heat after conversion to steam or hot water through a heat exchanger to organisations or establishments requiring heat, such as households and commercial businesses in winter, steel, brick kilns and smelting plants. This process raises the overall efficiency of the power plant to 80-85 per cent, while providing an alternative source of revenue for the generating company.

Trigeneration, or combined cooling, heat and power (CCHP), is the simultaneous production of electricity, heat and cooling – all from a single source. The heat and electricity are produced by the regular operation of a CHP unit, while an absorption chiller is used for producing chilled water from the heat output. The overall efficiency of a trigeneration system can reach up to 85 per cent, or even higher, depending on system conditions.

An absorption chiller is a refrigerator that uses a heat source to provide the energy needed to drive the cooling process. Absorption chillers do not have moving parts, and there is little or no wear and tear. Further, the technology, and operations and maintenance costs are very low. In addition, the overall lifecycle costs are low. This makes it attractive for solutions that do not require part or all the heat from the engine.

The prerequisite for the appropriate utilisation of cogen (or trigen) plants is demand for both (or all three) forms of energy, electric power and heat (and cold as applicable). Wherever this demand for both (all) types of energy is given, co-/trigen technology seems to be a promising approach to increase energy efficiency and reduce energy costs.

One of the first trigeneration projects in India was implemented by the Bureau of Energy Efficiency and the German government in New Delhi’s Jai Prakash Narayan Apex Trauma Centre in 2010. The demonstration plant had three major components: gas engine, vapour absorption machine (VAM) and an electrical chiller (vapour compression [VC]) for meeting the balance cooling demand. The gas engine generated electrical power (347 kW) by utilising 96 standard cubic metres (scm) gas per hour and gases from the exhaust are passed through a VAM. The VAM, through an absorption refrigeration cycle, produced chilled water at 7°C by utilising heat from the exhaust gases and from a high temperature (HT) circuit, which further increased the efficiency. 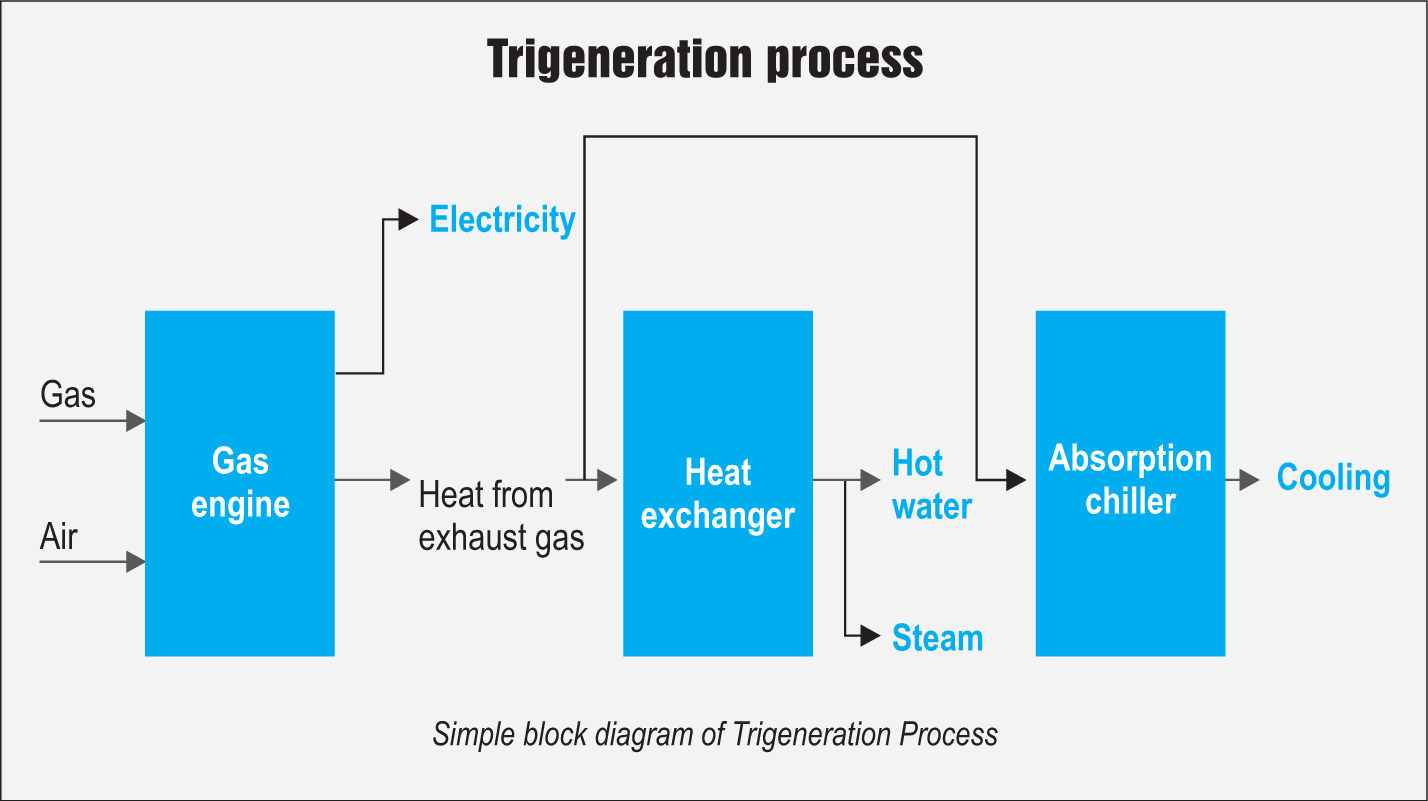 Trigeneration provides benefits in the form of energy and cost savings, and reduced greenhouse gas emissions. As per Energy Efficiency Services Limited (EESL), trigeneration can reduce the end user’s primary energy demand by 60-70 per cent, increase the overall energy efficiency by almost 75 per cent, and cut greenhouse gas emissions by up to 30 per cent. The trigeneration system can provide 300 tonnes of refrigeration for every megawatt of power it generates, saving up to 195 kW of electricity, and eliminating the need for investments in the centralised cooling equipment and hot water boilers. Further, by creating a parallel source of electricity through captive generation, trigeneration can protect consumers against surging tariffs.

In countries such as the Netherlands and Denmark, gas-based cogeneration is said to constitute nearly one-fifth of the total power generation, and in the UK, it constitutes about 11 per cent.

The potential of trigeneration technology in India’s energy scenario is estimated at 15 GW, which can be scaled up to 30 GW over the next five years. Tapping into this potential will require an investment of Rs 9 trillion across the building and industry sectors, resulting in an annual emission reduction of 32.2 million tonnes. However, local banks and financial institutions are not always familiar with financing cogeneration and trigeneration technologies. Third parties such as energy service companies can provide alternative financing opportunities.

Some of the potential consumers of the technology are commercial establishments such as hospitals, hotels, shopping malls and technology parks; industries such as dairy, food and beverages, and pharmaceuticals; and large engineering manufacturing facilities. Currently, most of these facilities/industries rely on grid power supply and have stand-alone systems for heating and cooling applications. Further, upcoming data centres in India are potential candidates for trigeneration, given their huge power and HVAC consumption. The number of data centres situated in the country will rise even further because of the government’s Data Localisation Policy passed in 2020, mandating all data related to Indian citizens to be stored in data centres within India. Switching to trigeneration can help reduce the demand for grid electricity and provide environment-friendly cooling/heating solutions for a variety of industrial applications.

The initial phase of trigeneration adoption might be limited to cities, where there is a stable gas supply network and possibly a number of smart cities could find this attractive. For remote and rural customers, where gas supply has not yet been established, work is on to explore the feasibility of using liquefied natural gas transportation.

EESL is offering trigeneration technology to industries and institutions in India through its unique pay-as-you-save business model for an integrated service offering. This includes equipment maintenance and electricity, heat and power supply. While clients will not bear any upfront costs for technology installation, EESL will recover the capital and operating costs for the installations through demonstrated energy savings. EESL developed expertise and a compelling market offering in this technology after acquiring Edina UK Limited for Rs 4.93 billion, a leading supplier, installer and maintenance provider of CHP, gas and diesel power generation solutions in the UK.

For supplying gas, EESL has already signed MoUs with GAIL Gas, Bharat Petroleum and Gujarat Gas to cocreate an ecosystem for providing readily available gas, the input fuel for trigeneration, to potential customers. EESL has also signed four MoUs with industries and institutions to explore opportunities for natural gas-based trigeneration projects in India. One key project is being implemented with Mahindra & Mahindra to install and service a trigeneration project of 803 kWe capacity at an investment of Rs 250 million. The trigeneration project comprises generation of electricity in a gas-fed generator (PNG as input) and utilises its waste heat for both heating and cooling applications.

Net, net, trigeneration technologies promise to improve plant efficiency and reduce emissions. The reduction in electricity demand for HVAC processes across segments is in itself equivalent to additional capacity. They also endow the system with robustness and stability since these systems have limited intermittency and ramping issues and if they are bottom-up plants, where heat is primarily utilised for processes, the availability of a captive source of electricity would be immensely useful in enhancing predictability and security for those industrial units. Therefore, the government must focus on designing a coherent policy framework, provide financial support and an institutional set-up, which would synergistically facilitate and accelerate the adoption of trigeneration technology for better grid stability,  greater efficiency in generation and lower emissions.