The EU Strategy on Offshore Renewable Energy proposes to increase Europe’s offshore wind capacity from its current level of 12 GW to at least 60 GW by 2030 and 300 GW by 2050. The EC aims to complement this with 1 GW of capacity based on ocean energy and other emerging technologies such as floating wind and solar by 2030, and take it to 40 GW by 2050.

This ambitious expansion plan aims to tap the vast potential across Europe’s sea basins and leverage the EU’s leadership position in offshore renewable energy production and technologies. The strategy will encourage public and private investment in new infrastructure and research, allow different regions to work together more efficiently, and provide a clear and stable legal framework. It will promote and build on cross-border and regional cooperation, particularly in the North Sea, Baltic Sea, Mediterranean Sea, Black Sea, the Atlantic Ocean, and outermost regions and overseas territories.

It will not only help achieve larger environmental goals, but will also create new opportunities for the industry. While Europe has established technological and industrial leadership, particularly in the offshore wind sector, European laboratories and industries are rapidly developing a range of other technologies to harness the potential of its seas for producing green electricity. These include floating offshore wind, ocean energy technologies (wave, tidal and floating PV installations), and algae to produce biofuels.

The strategy highlights the scaling up of offshore renewable energy and its use as an EU priority. It estimates an investment requirement of Euro 800 billion between now and 2050 to meet its proposed objectives. Two-thirds of this investment will be used to fund the associated grid infrastructure and one-third will be for offshore generation. The annual grid investments (both onshore and offshore) have to be doubled to Euro 60 billion during the decade up to 2030, as compared to an investment of Euro 30 billion in the previous decade. This will need to be further increased beyond 2030.

The offshore renewable energy segment covers a host of clean energy technologies that are at different stages of maturity. Europe has a strong market and the first-mover advantage in the large-scale commercial application of bottom-fixed wind technology. It has also taken the lead in the development of floating offshore wind. By 2024, 150 MW of floating offshore wind turbines are expected to be commissioned. Currently, there is no specific ocean technology and the sector still struggles to create an EU market despite progress in development and demonstration. That said, ocean technologies could make a significant contribution to Europe’s energy system and industry by 2030, supporting grid stability and decarbonising islands in the EU.

For offshore wind installations, the challenge is to create an optimum environment to maintain and accelerate the momentum created in the North Sea, extend best practices to other sea basins, starting from the Baltic Sea, and support global expansion. For other technologies, the challenge is to mobilise sufficient and well-targeted funding for research and demonstration, to bring down costs and launch these technologies in the market.

In order to accelerate offshore renewable energy deployment cost efficiently and sustainably, more rational grid planning is required along with the development of a meshed grid. Hence, the concept of hybrid projects, which have the dual functionality of combining electricity interconnections between two or more countries, has gained traction over the past few years. Apart from this, there is increasing focus on the transportation of offshore renewable energy to its consumption sites.

Hybrid projects, which can be set up in different ways such as energy islands and hubs, generate substantial savings in terms of costs and space as compared to the current approach of relying on radial connections and separately developing cross-border interconnectors for trade. Hybrids will form a transitional step between small-scale national projects and a fully meshed offshore energy grid. For this, the interoperability of various national offshore systems is essential. The development and planning of offshore grid need to go beyond national borders and cover the whole sea basin.

As a first step, the EU countries need to adopt a coordinated approach and make a long-term commitment to offshore renewable energy development. They should together set ambitious targets for offshore renewables in each sea basin, while taking into account environmental protection, socio-economic impacts and maritime spatial planning. These targets could translate into an MoU or an intergovernmental agreement among the countries. These commitments should be reflected in the updated NECPs in 2023-24. 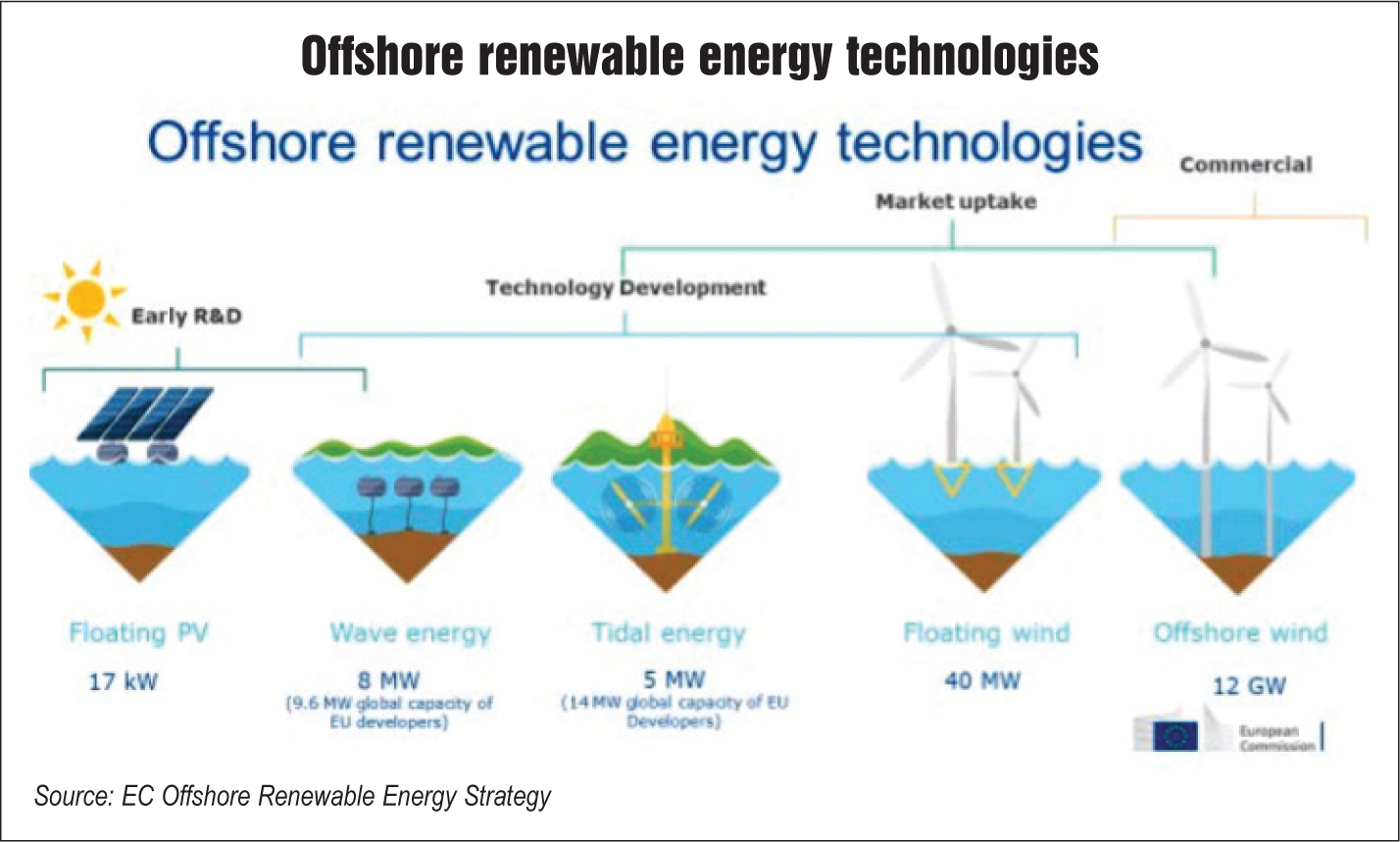 The next step would be to take these ambitious targets into account in integrated regional grid planning and development. The option of offshore hydrogen production and hydrogen pipelines to deliver offshore onshore energy should be considered in electricity and gas grid planning. To make an investment decision, the offshore renewable generation developers must establish the time frame and plans for offshore and onshore grid infrastructure development in advance for greater clarity given that grid development has longer lead times than offshore power generation.

Furthermore, permitting processes in EU countries must be streamlined to avoid unnecessary delays. The commitments at the national level will reduce the TSOs’ risk of developing stranded assets offshore. This will require greater coordination among EU countries, TSOs and national regulatory authorities in the same sea basin for planning the grid infrastructure.

The current legislative framework, such as the Regulation on the Governance of the Energy Union and Climate Action, the Maritime Spatial Planning Directive, sea basin strategies and conventions provide scope for better regional cooperation to better align regional planning. The regional cooperation framework set up under the TEN-E Regulation to identify projects of common interest is also a good model to build upon.

In the short term, it may be necessary to set up a more structured cooperation among the stakeholders to formulate more integrated and optimised regional offshore grid planning. Subsequently, regional coordination centres, which will become operational in 2022, could play a greater role in offshore grid planning to complement the national TSOs’ role in regional tasks. In the long term, structural cooperation could be further enhanced by establishing regional offshore independent system operators to operate and develop increasingly meshed offshore grids.

To jointly commit to developing offshore renewables and related infrastructure, countries need to develop a robust methodology for allocating costs (both among the concerned countries, and between the generation assets and the transmission project) based on the accrual of benefits.

The following key actions related to grid infrastructure have been outlined:

A clear and supportive legal framework: The EC has clarified the electricity market rules in an accompanying staff working document and will assess whether more specific and targeted rules are needed. It will ensure that the modifications of the state aid guidelines on energy and environmental protection and the Renewable Energy Directive will enable the cost-effective deployment of offshore energy. Meanwhile, the EC has adopted a new guidance document on wind energy development and EU nature legislation.

In 2022, the EC will propose amending the legislation on the allowed use of congestion income to provide an option for countries to give a more flexible allocation of congestion income with regard to offshore hybrid projects. This year, it will task the Electricity Stakeholder Committee to prepare amendments to the Grid Connection Network codes for offshore high voltage direct current grids.

Mobilising funds to support sector development: The EC encourages member countries to use the Recovery and Resilience Facility, and work with the European Investment Bank and other financial institutions to support investments in offshore energy through InvestEU. The new InvestEU programme could provide support and guarantees for emerging technologies to accelerate private investment through its different windows, such as supporting research and innovation, infrastructure development and strategic industries. The EC will facilitate the development of cross-border cooperation projects including interconnections under the new Connecting Europe Facility, and a renewable energy financing mechanism, including a blending facility within InvestEU. Meanwhile, Horizon Europe funds will be mobilised to support research and development, particularly in less mature technologies.

A stronger supply chain: The strategy lays emphasis on the need to improve manufacturing capacity and port infrastructure and increase the suitably skilled workforce to sustain higher installation rates. The EC plans to establish a dedicated platform on offshore renewables within the Clean Energy Industrial Forum to bring together all actors and address supply chain development. The EC and European Network of Transmission System Operators for Electricity (ENTSO-E) will promote standardisation and interoperability among converters of different manufacturers (to be operational by 2028) and also promote EU standards internationally.

To meet Europe’s long-term decarbonisation objectives and the expected rise in electricity demand, the EU Offshore Renewable Energy Strategy promises to harness the potential of offshore development in the continent in a cost-effective and sustainable way. It can also make a major contribution to the post Covid-19 recovery. As a sector, offshore renewable energy is forecast to grow exponentially in the coming decades.

The collaboration of all stakeholders including EU countries, the offshore renewables industry, NGOs, all sea users, and the fisheries and aquaculture sectors is vital for achieving the ambitious targets proposed by the strategy. The EC plans to organise a High Level European Offshore Renewable Conference in 2021, to promote the exchange of best practices and discuss common challenges.

The EC acknowledges that a lack of offshore grids or delays in grid development can be major barriers to swift deployment, and thus its attention and investments must be focused on grid planning and development. The European policymakers are taking their 2050 climate goals seriously and plan to take the proposed policy actions forward without any delay.