Covid-19 will leave lasting scars on India, notes the International Energy Agency (IEA) in its recently released “India Energy Outlook 2021” report, which examines the opportunities and challenges faced by the world’s third-largest energy consuming country as it seeks to recover from the Covid-19 crisis.

According to the IEA, prior to the global pandemic, India’s energy demand was projected to increase by almost 50 per cent between 2019 and 2030, but growth over this period will now be closer to 35 per cent in the stated policies scenario (STEPS), and 25 per cent in a delayed recovery scenario. “The latter would put some of India’s hard-won gains in the fight against energy poverty at risk, as lower-income households are forced to fall back on more polluting and inefficient sources of energy,” the IEA states.

The report, however, notes that India is set to experience the largest increase in energy demand amongst any country worldwide over the next 20 years as its economy continues to develop and bring greater prosperity to its citizens.

“India has made remarkable progress in recent years, bringing electricity connections to hundreds of millions of people and impressively scaling up the use of renewable energy, particularly solar,” says Dr Fatih Birol, executive director, IEA. “What our new report makes clear is the tremendous opportunity for India to successfully meet the aspirations of its citizens without following the high-carbon pathway that other economies have pursued in the past. The energy policy successes of the Indian government to date make me very optimistic about its ability to meet the challenges ahead in terms of energy security and sustainability.”

The following are the key highlights of the report…

According to the IEA, coal has strengthened its role as the dominant energy source in the country, maintaining its strong position in power generation as well as being the fuel of choice for many industries, especially heavy industries such as iron and steel. Coal demand nearly tripled between 2000 and 2019, accounting for half of the primary energy demand growth. Today, coal meets 44 per cent of India’s primary energy demand, up from 33 per cent in 2000. Coal has played a significant role in India’s economic development, though also contributing to air pollution and greenhouse gas emissions.

Electricity consumption has nearly tripled over the past two decades. On the supply side, coal remains the predominant fuel source in the power sector, contributing to over 70 per cent of the total generation in 2019. Solar PV and wind accounted for 18 per cent of the capacity mix in 2019, but their combined share in generation was less than 10 per cent.

Despite the Covid-19 shock, India’s electricity demand is still projected to grow by almost 5 per cent per year to 2040 in the STEPS, which is nearly double the rate of energy demand as a whole.

However, the pandemic has disrupted India’s energy use. Primary energy demand has declined 5 per cent over the 2019 levels, with coal and oil expected to take the largest hit due to far-reaching restrictions on mobility and a reduction in economic activity. Natural gas demand has been resilient, as low prices have offset some of the forces driving down demand. Renewables have also fared relatively well, with generation from wind and solar growing by 15 per cent.

In the wake of Covid-19, coal has been acting as the main source of flexibility in India’s power system. Changes in regulations have reduced the minimum technical load factors of coal plants run by the central government, from 70 per cent to 55 per cent since 2010. Although this entails added costs, particularly for older plants, it improves their ability to support the integration of variable renewable energy into the power system.

The pandemic has also hit investments in the energy sector, which fell by an estimated 15 per cent in 2020, exacerbating financial strain across the board, in particular, among distribution companies.

The pandemic has introduced new uncertainties into the outlook for India’s energy sector, but it has not altered the key underlying drivers. Chief among them are urbanisation and industrialisation. Till now, India’s economic growth has been driven mainly by the services sector, rather than the more energy-intensive industry sector, and the rate at which India has urbanised has been somewhat slower than in other emerging countries. How fast India urbanises and industrialises over the coming decades, and which policies govern these processes, will be of crucial significance for its energy future and for global trends. 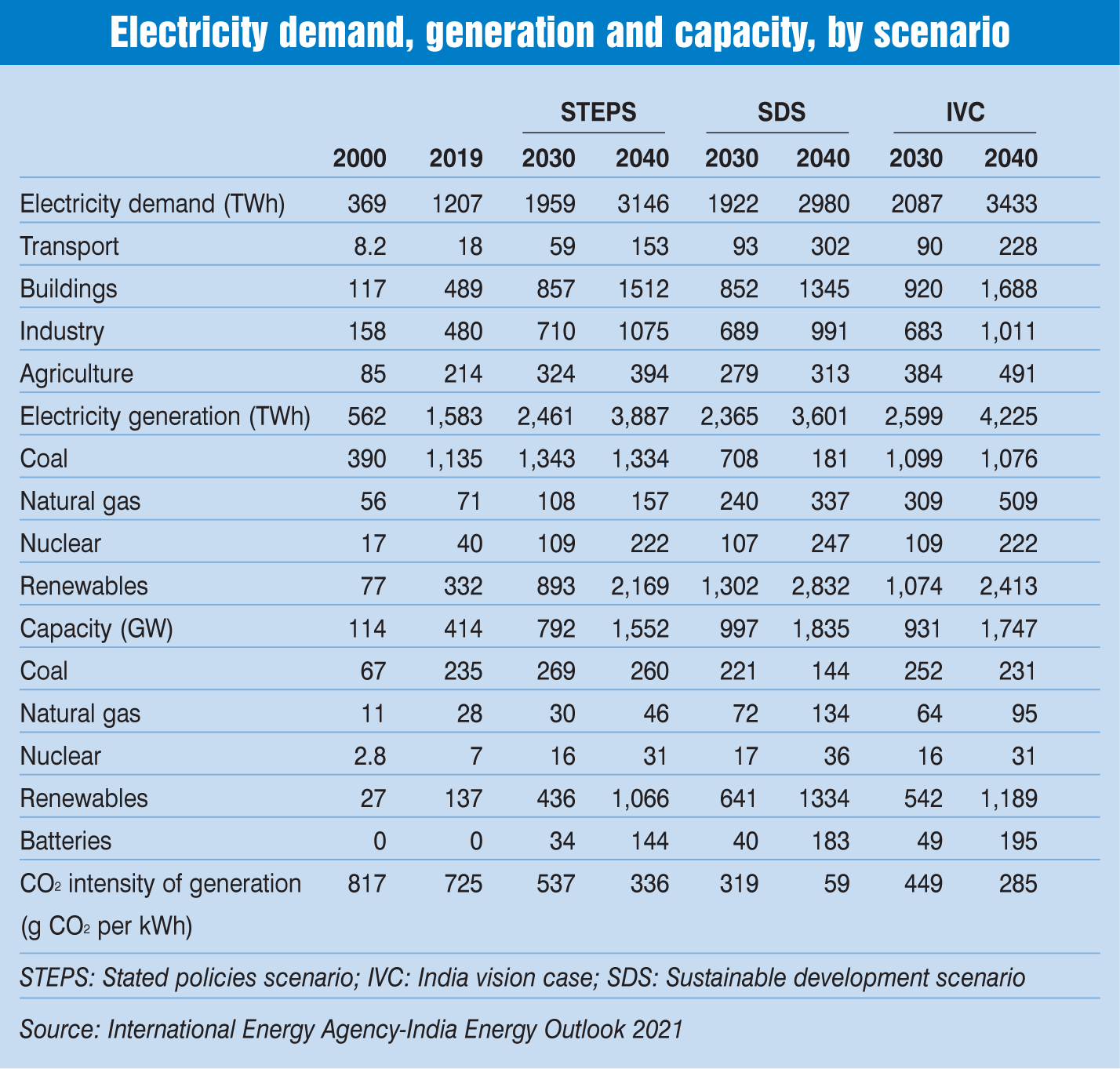 In the report, the IEA notes that the affordability and reliability of energy supply are key concerns for consumers in the country. There are also important structural, regulatory and institutional challenges that could hamper further growth, and progress has been uneven across different renewable technologies. The challenges include the poor financial position of many state distribution companies, difficulties in obtaining access to finance and in acquiring land, grid congestion, and uncertainties over grid infrastructure development. The expansion of rooftop solar has also been slow.

The rapidly rising requirement for flexibility in the operation of the power system is a potential hazard for electricity security in India. Another issue is the poor financial health of discoms. Improving billing and collection efficiency, and reducing technical and commercial losses are key to reforming the sector. Stepping up investments in renewables also means tackling risks relating to delayed payments to generators, land acquisition, and regulatory and contract certainty.

The financial and operational performance of state distribution companies – key developers of grids, purchasers of power and integrators of new technologies – continues to constrain capital availability, despite efforts such as the Ujwal Discom Assurance Yojana initiative. This initiative involved writing off debt and restructuring loans against a commitment to improve performance. However, investors and developers continue to be concerned about the risks involved in power purchase projects. An $18 billion backlog of payments to generators emerged in 2020, and further reforms are required to enable distribution companies to return to profitability, including measures to achieve cost-reflective pricing.

The rapid expansion of solar power combined with smart policy-making are transforming India’s electricity sector, enabling it to provide clean, affordable and reliable power to a growing number of households and businesses, the report finds. However, as is the case in economies around the world, the transport and industrial sectors – areas such as road freight, steel and cement – will prove far more challenging to develop in a sustainable manner.

More than that of any other major economy, India’s energy future depends on buildings and factories that are yet to be built, and vehicles and appliances that are yet to be bought. Based on India’s current policy settings, nearly 60 per cent of its CO2 emissions in the late 2030s will be coming from infrastructure and machines that do not exist today. This represents a huge opening for policies to steer India on to a more secure and sustainable course.

These transformations – on a scale no country has achieved in history – require huge advances in innovation, strong partnerships and vast amounts of capital. The additional funding for clean energy technologies required to put India on a sustainable path over the next 20 years is $1.4 trillion, or 70 per cent higher than in a scenario based on its current policy settings. But the benefits are huge, including savings of the same magnitude on oil import bills, notes the IEA. Overall, government policies to accelerate India’s clean energy transition can lay the foundation for lasting prosperity and greater energy security. The stakes could not be higher, for India and for the world, the IEA concludes.