When coal is combusted, typically about 10 per cent of coal ash is generated and effective use of large amounts of coal ash becomes an issue. However, the quality of Indian coal being lower grade, the ash content is very high, about 30-45 per cent. Coal ash includes a number of by-products produced from burning coal, including fly ash, a very fine, powdery material composed mostly of silica made from the burning of finely ground coal in a boiler. There can also be bottom ash, a coarse, angular ash particle that is too large to be carried up into the smoke stacks, so it forms in the bottom of the coal furnace. This fly ash that is generated is a source of both air and water pollution.

As per a report on fly ash generation and utilisation at coal/lignite-based thermal power plants (TPPs) for 2019-20, published by the Central Electricity Authority (CEA), 226.13 mt of fly ash was generated during this period, of which 187.81 mt was utilised. The percentage utilisation rate reached around 83 per cent in 2019-20, which is a significant improvement compared to the previous year’s 68.72 per cent. Over the years, the utilisation rate of fly ash in TPPs has improved; nonetheless, it is still below the norms prescribed in the Environment Protection Act, which requires 100 per cent utilisation of fly ash.

State-wise, of the 18 states under study, seven states – Andhra Pradesh, Chhattisgarh, Madhya Pradesh, Maharashtra, Odisha, Uttar Pradesh and West Bengal – have generated more than 10 mt of fly ash. The highest generation was by Chhattisgarh with 34.82 mt. Andhra Pradesh, Gujarat, Haryana, Jharkhand, Punjab and Tamil Nadu achieved fly ash utilisation level of more than 100 per cent and Rajasthan 95-100 per cent. Assam and Delhi have achieved utilisation of less than 50 per cent.

The dry ash is typically conveyed pneumatically from the ESP or filter fabric hoppers to storage silos, where it is kept dry, pending utilisation or further processing, or to a system where dry ash is mixed with water and conveyed (sluiced) to a non-site storage pond. Fly ash is stored in silos, domes and other bulk storage facilities.

Dry fly ash collected is also suitably moistened with water and wetting agents as applicable, using specialised equipment (conditioned) and hauled in covered dump trucks for special applications such as structural fills. Water-conditioned fly ash can also be suitably stockpiled at job sites. Exposed stockpiled material must be kept moist or suitably covered to prevent fugitive emission. The dry bottom ash removal and its transportation is more environment friendly, compared to that of wet ash removal and transport system. 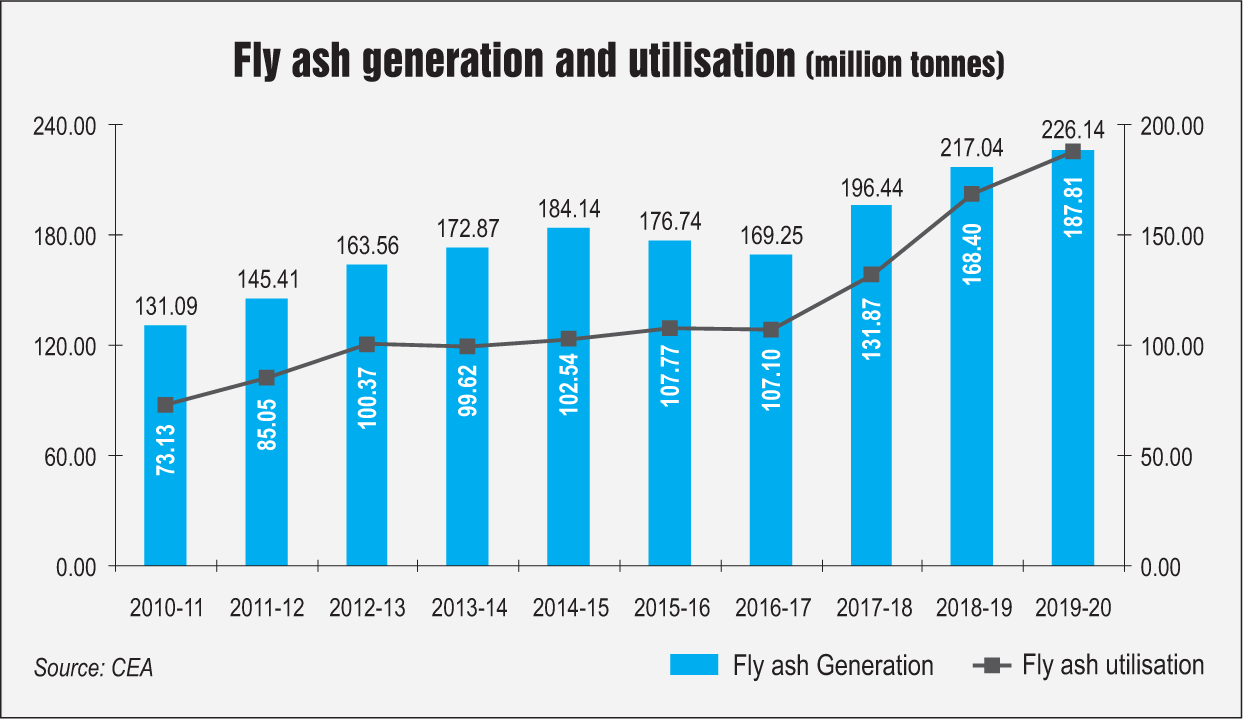 In order to address environmental concerns, the Ministry of Environment, Forest and Climate Change (MoEFCC) issued the first directive for promoting fly ash utilisation in the country in September 1999 and subsequent amendments from time to time. The last amendment issued in January 2016 mandated 100 per cent fly ash utilisation by TPPs by the end of December 2017. In addition, it specified that power plant developers will bear the entire cost of ash transportation up to a 100-km radius of the power station. For distances of more than 100 km and up to 300 km, the developer will share the cost of ash transportation equally with the user or the construction agency.

80 per cent in any year. Additionally, whatever shortfall there is in year has to be covered in the next few years. The draft also specifies a penalty of Rs 1,000 per tonne if the plant does not achieve at least 80 per cent ash utilisation annually or in three years. An additional fine of Rs 1,000 per tonne will be imposed for failing to adhere to progressive utilisation – at least 20 per cent in the first year, 35 per cent in the second, 50 per cent in the third to tenth year. Further, there is a clause in the draft that if a TPP is located within a 50-km radius of a coal mine, it is mandatory for the coal mine owner to use the fly flash from power stations and do backfilling into the mine. For back filling of the mine, up to 25 per cent of the fly ash can be mixed with the overburden. Further, in the draft, MoEFCC has mandated any TPP that is located 300 km from a coal mine to use fly ash for the backfilling of the mine with transportation at the cost of the utility. 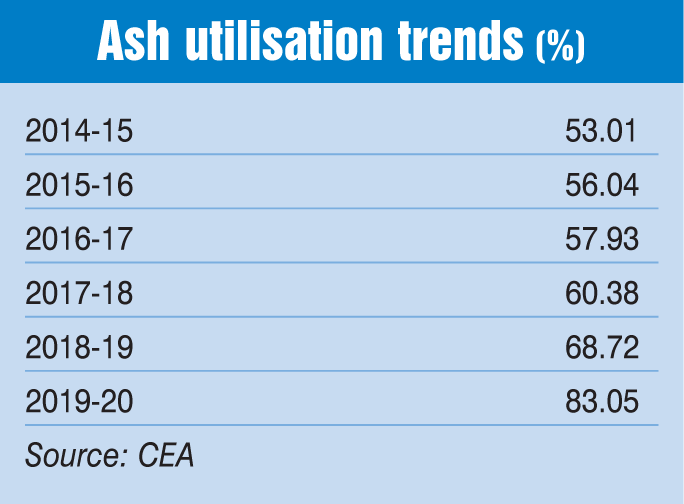 Fly ash management has taken considerable strides over the past few years. The cement industry is the largest utiliser of fly ash in India, as it is used as a crucial element in products such as poured concrete, concrete blocks and bricks. It is most commonly used in plain cement concrete, substituting normal Portland cement, improving the strength, segregation and ease of pumping concrete. In a step toward enhancing fly ash utilisation, NTPC Rihand became the first power plant in Uttar Pradesh to send conditioned fly ash to cement manufacturers. The plant recently transported 3,834 MT of conditioned fly ash in 59 BOXN wagons to Dalmia Cement (Bharat) Limited’s plant at Nagaon, Assam.

Fly ash can also be used to produce bricks along with sand and ordinary cement or lime and gypsum. Around 1.25 grams of fly ash is utilised in a single such brick. These bricks have three times more strength than clay bricks. During 2019-20, NTPC’s stations produced about 45.4 million fly ash bricks. Fly ash can also be used for the construction of roads, embankments and flyovers. The utilisation of fly ash for these constructions saves the topsoil, which is otherwise generally used. It also avoids the creation of low-lying areas, which are otherwise created due to excavation of soil used for the construction of embankments. The high permeability of fly ash ensures free and efficient drainage.

Fly ash has recently started being used as a component in geopolymers, where the reactivity of the fly ash glasses creates a binder comparable to a hydrated Portland cement in its properties, but carbon dioxide emissions are reduced. NTPC-Ramagundam has now developed geo-polymer coarse aggregates as a replacement to natural aggregates for use in building construction.

Fly ash can be used to fill in abandoned coal mine pits, converting them into the land. Fly ash is also useful in agriculture as it improves the permeability, fertility, aeration, porosity and textural properties of soil.

Fly ash might be used in the stabilisation/solidification process of hazardous wastes and contaminated soils. For instance, the Rhenipal process uses it as an admixture to stabilise sewage and other toxic sludge. At the same time, due to its alkalinity and water absorption capacity, fly ash may be used in combination with other alkaline materials to transform sewage sludge into organic fertiliser or biofuel.

It would require even more efforts to achieve the target of 100 per cent utilisation of fly ash. Approximately, 16.95 per cent unutilised fly ash was dumped at various TPPs during 2019-20. Some more strategies that the CEA notes, which need to be adopted to make fly ash management and utilisation more efficient include renovation and modernisation of TPPs, with the inclusion of the technological advancement required to ensure development of dry fly ash collection, storage and disposal facilities; use of fly ash in the construction of embankments for laying railway lines for large scale utilisation of fly ash; ensuring that TPPs use fly ash and fly ash-based building products within the thermal power station for the development of infrastructure such as construction of buildings and roads, and reclamation of low lying areas. Additionally, CEA notes, there should be encouragement of “Industry-Institute Interactions” for entrepreneur development, creation of awareness and organisation of training programmes and workshops.