Back in March 2019, the government had introduced key measures to promote the hydropower segment, including two key announcements – the classification of large hydro projects as renewable energy sources and the introduction of a hydro purchase obligation (HPO) mechanism, as a separate entity within the non-solar renewable purchase obligation (RPO) category. This month, following up on these announced measures, the government has notified the HPO trajectory, giving states hydropower procurement targets along the lines of the RPO. The HPO will be applicable to all obligatory entities and will cover large hydro projects commissioned on or after March 2019. It will also help the sector meet the 30,000 MW hydro capacity addition target by 2030. A closer look at the details of the new order…

Details of the notification

As per the Ministry of Power’s (MoP) notification, the RPO will be calculated in energy terms, as a percentage of the total electricity consumption, excluding the consumption met from hydropower sources. The solar RPO target may be met by power produced from solar power projects – solar PV or solar thermal. Other non-solar RPO (excluding HPO) may be met by any renewable source other than solar and large hydropower projects.

The HPO benefits may be met by the power procured from large hydropower projects commissioned on and after March 8, 2019 and up to March 31, 2030 in respect of 70 per cent of the total generated capacity for 12 years from the date of commissioning. Further, free power is to be provided as per the agreement with the state government. The power provided for the Local Area Development Fund (LADF) will not be included within this limit of 70 per cent of generating capacity.

In case the free power is insufficient to meet the HPO obligations, the state will have to buy the additional power to meet its HPO obligation or buy a corresponding amount of hydro energy certificates.

The hydro energy certificate mechanism, to be developed by the Central Electricity Regulatory Commission (CERC), will have a price cap of Rs 5.50 per unit of energy with effect from March 8, 2019 to March 31, 2021, with an annual escalation of 5 per cent thereafter for purposes of ensuring HPO compliance. The HPO trajectory will be trued-up on an annual basis, depending on the revised commissioning schedule of hydro projects. The HPO trajectory for the period between 2030-31 and 2039-40 will be notified subsequently.

According to the ministry, the state electricity regulatory commissions can consider notifying the RPO trajectory, including the HPO, for their respective states in line with the aforesaid RPO trajectory. Moreover, the CERC may consider devising a suitable mechanism, similar to renewable energy certificates (RECs), for the fulfilment of the HPO.

The HPO mechanism has been welcomed by the industry, as a separate HPO with a clear mandate for hydropower procurement will ensure greater offtake from hydropower projects.

“Given the fact that discoms were not buying hydropower as it was expensive, the HPO will compel them to buy hydropower,” noted Rahul Varshney, country head, Statkraft, at Power Line’s recent conference on “Hydro Power in India”. This will give an incentive to developers and provide a mechanism for discoms to enter into long-term power purchase agreements. Further, RECs can be sold on the exchanges, which can bring in additional revenue for power generators. Also, the HPO could bridge the gap between hydro and other renewable forms of power, which makes the former more expensive by bringing hydro at par with other RPOs. Of course, this would mean an additional burden on discoms; however, there are certain advantages as well. For instance, during non-solar hours, discoms need power and for this, they would need flexible generation, which can cater to the morning and evening peaks, and hydro can sufficiently cater to this need.

Will HPOs be sufficient to uplift the sector? According to Harvinder Manocha, chief operating officer, hydro, GMR Energy, “HPOs alone will not be able to uplift the sector. A host of other measures, such as strong local stakeholder support, better financing and better tariff instruments that recognise the true potential of hydropower are needed as well.” 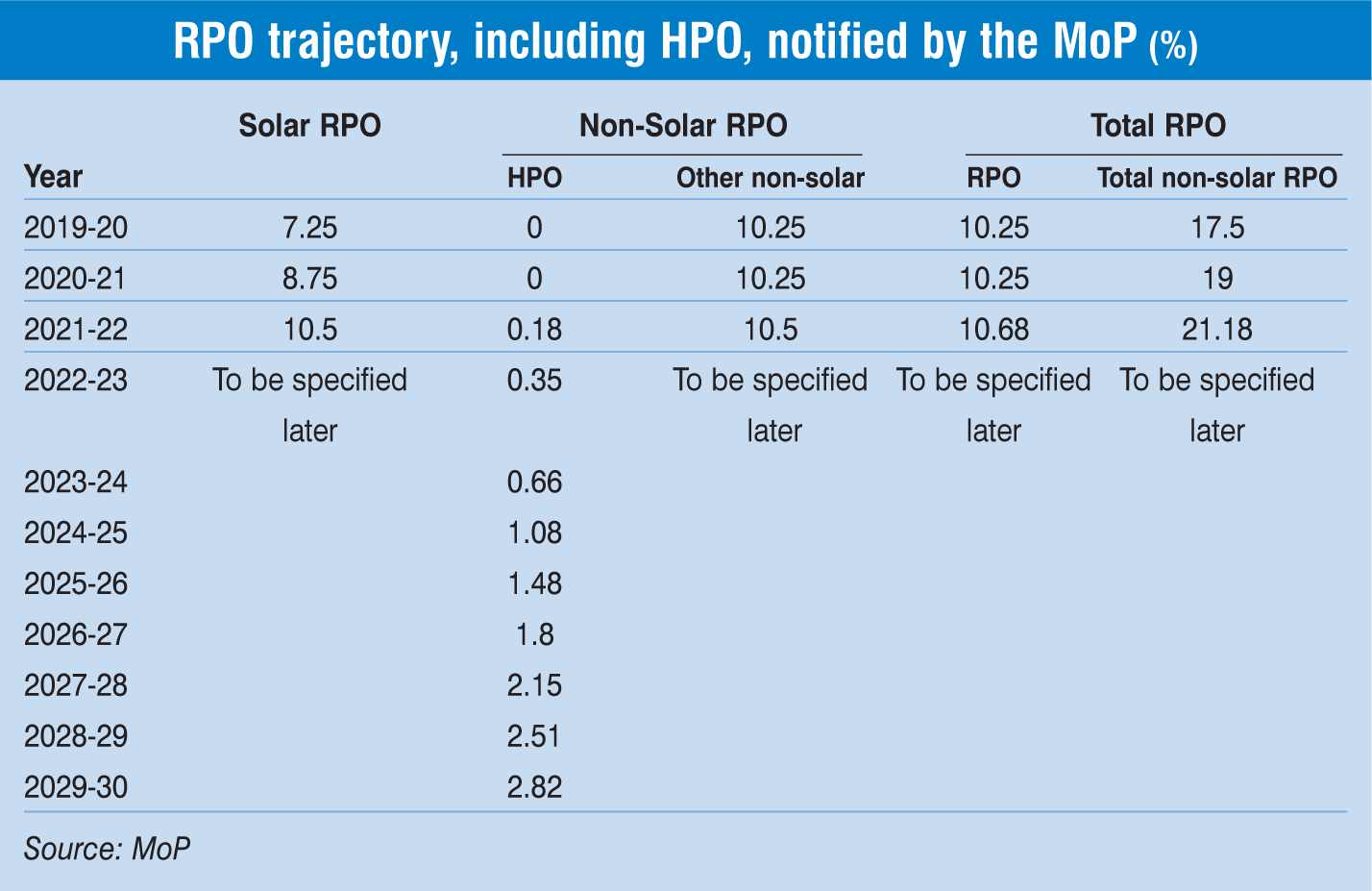 The HPO notification has reinforced the fact hydropower is seen as an important source of power for the grid by policymakers and is not a forgotten workhorse. It may be recalled that amidst the Covid-19 pandemic, during the historic 9 PM-9 Minute event last year managed by POSOCO, a massive 32 GW dip in electricity demand was witnessed. At this point, it was the hydropower plants that had swung into action and recorded a peak ramp rate of 2.7 GW per minute.

Undoubtedly, hydropower projects are an affordable and green source of electricity, and offer a long economic life, fast ramp rates and minimal intermittency issues, besides contributing to flood control and irrigation. That said, the share of large hydropower (>25 MW), at over 45 GW, constituted only 12.2 per cent of the total installed capacity, as of December 2020. In fact, hydro has comprised only a small portion of the installed renewable capacity in relation to total capacity since 2015 because of the growth of wind and solar projects, which require comparably limited capital expenditure and have a predictable cost structure and execution timeframes. Hydro projects have also suffered due to time and cost overruns, and the situation has been further aggravated by the Covid-19 pandemic.

According to industry estimates, hydro projects with a cumulative capacity of 14,433 MW are stuck at various stages of development. In addition, the requirement of providing a certain percentage of free power within the state has led to an increase in the cost of hydropower in recent years. As per ICRA’s estimates, the current unit cost for large hydropower plants commissioned during 2018-21 is on par with thermal projects running on imported coal at Rs 4 per unit.

The recent Uttarakhand flood tragedy has further heightened the sector’s risk perception and social and ecological concerns for such projects. Net, net, while incentives such as HPOs are expected to benefit the sector in the long term, there is still a long road ahead before the hydro segment can emerge from troubled waters.