To ensure sustainable electricity supply and energy security, efficient management of the power distribution network by using advanced devices, which can monitor and control power flows in real time, has become necessary. In order to bring efficiency and sustainability in the power distribution segment, the government introduced smart grid technologies as envisaged under the National Smart Grid Mission (NSGM) by the Ministry of Power (MoP). The pilot smart grid projects launched in 2013 by the MoP have already been completed and the next set of smart grid projects is now under way as a part of the NSGM.

The MoP announced smart grid pilot projects to be implemented by various state-owned distribution utilities in 2013. In July 2019, all the 11 pilots that were announced were declared “go live”, completed or commercially operated. The pilot projects sanctioned by the MoP were taken up across Assam, Gujarat, Himachal Pradesh, Haryana, Karnataka, Punjab, Telangana, Tripura, Puducherry, Uttar Pradesh and West Bengal, at a total cost of Rs 2.9 billion (including Rs 1.3 billion government funding). All projects have been partially funded by the MoP, except the project developed by Uttar Haryana Bijli Vitran Nigam (UHBVN), which was completely funded by the New Energy and Industry Technology Development Organisation. The functionalities covered in these pilots included advanced metering infrastructure (AMI), outage management system, peak load management, power quality management, distributed generation and supervisory control and data acquisition (SCADA).

So far, under 11 pilot smart grid projects, approximately 156,000 smart meters have been installed and nine projects have reached financial closure. Tripura’s and Telangana’s projects are expected to achieve financial closure soon, for which impact assessments have been completed. Among the key findings from these projects are that six pilots exceeded their aggregate technical and commercial loss targets, smart grid systems have been integrated with the R-APDRP in the Tripura, Assam and West Bengal pilots, and remote connect/disconnect has been tested at all pilots. In the UHBVN pilot, meters with more than one communication modules were developed/tested/deployed for fail-safe communication.

Also, power line communication (PLC) in the Agartala and Panipat pilots was successful, affirming the possibility of using PLC communication. The Remote connect/disconnect feature was tested at all pilots and deployed at the Calcutta Electric Supply Corporation, IIT Kanpur, HPSEB, SGKC, TSECL, UGVCL, UHBVN and WBSEDCL. 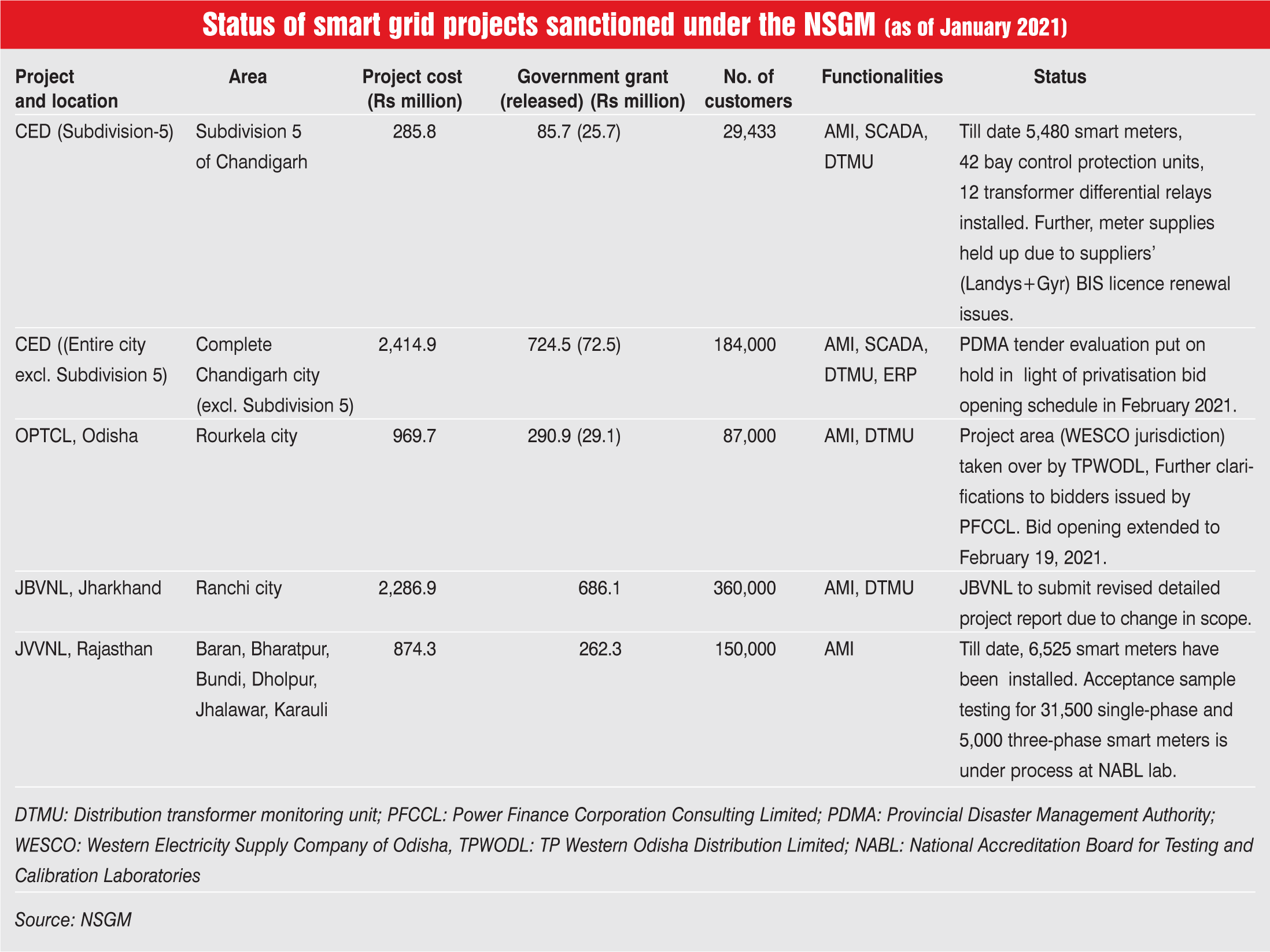 Five smart grid projects have been sanctioned to cater to 810,000 consumers and are at various stages of development. Around 750,500 smart meters are expected to be installed as part of these five NSGM projects being carried out in Chandigarh, Jharkhand, Odisha and Rajasthan.

As of January 2021, the projects being implemented by the Chandigarh Electricity Division (CED), excluding Subdivision 5, Jharkhand Bijli Vitran Nigam Limited (JBVNL) and Odisha Power Transmission Corporation Limited (OPTCL) are at the tendering stage, while projects in CED Subdivision 5 and Jaipur Vidyut Vitran Nigam Limited (JVVNL) are under implementation. As of January 2021, 5,480 smart meters have been installed by the CED in Subdivision 5, and 6,525 smart meters have been installed by JVVNL. The projects entail the deployment of automated metering infrastructure, distribution transformer monitoring units, enterprise resource planning (ERP) and SCADA systems.

Further, 19 state-level PMUs have been set up under the NSGM. Besides, a model standard bidding document has been prepared for the selection and appointment of AMI service providers (AMISPs) for smart prepaid metering in India on a design-build-finance-own-operate and transfer basis by state power utilities.

Also, the NSGM has developed the smart grid readiness self-assessment tool (SGR SAT), under the UK-India bilateral power sector reforms programme. This tool takes a systems view of the utility from a smart grid perspective and attempts to analyse each of the distinct utility components (domains) and subsystems (subdomains) to create a common and holistic evaluation methodology (maturity level). 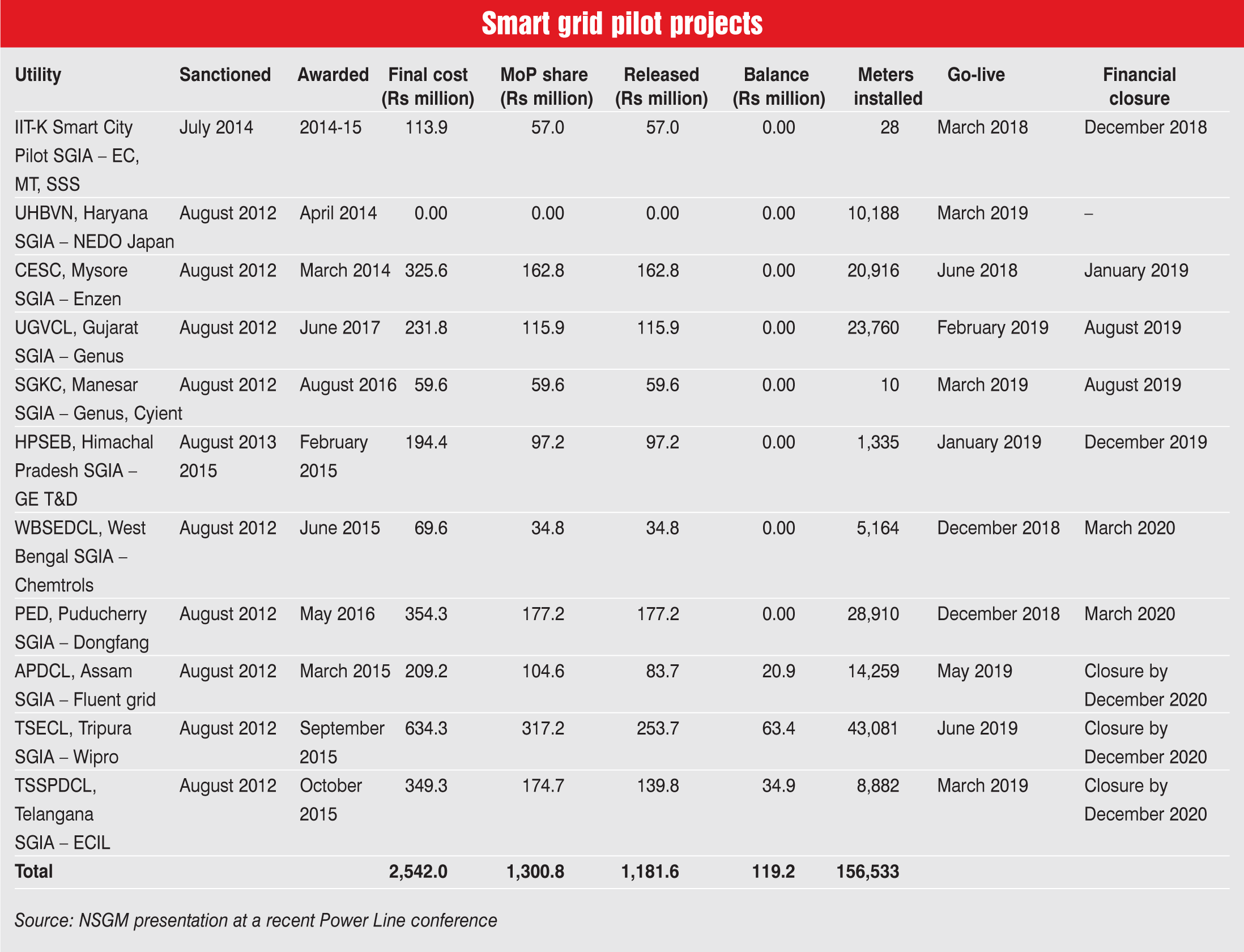 Going ahead, some key areas of work under the NSGM would be the development of state-specific smart grid roadmaps, deployment of SGR-SAT for utilities for  smart grid journey, state level PMU formation, development of the SGKC as an international incubation centre on smart grids and new technologies such as 5G, NB-IoT and cloud. In addition, support to the MoP in smart grid policy formulation and technology selection guidelines, standardisation towards interoperability and regulatory experiments for dynamic tariffs are among the other key areas of work under the NSGM.